Two separate incidents of violence against CPI(M) workers in Kerala were reported hours after an attack on an RSS office. 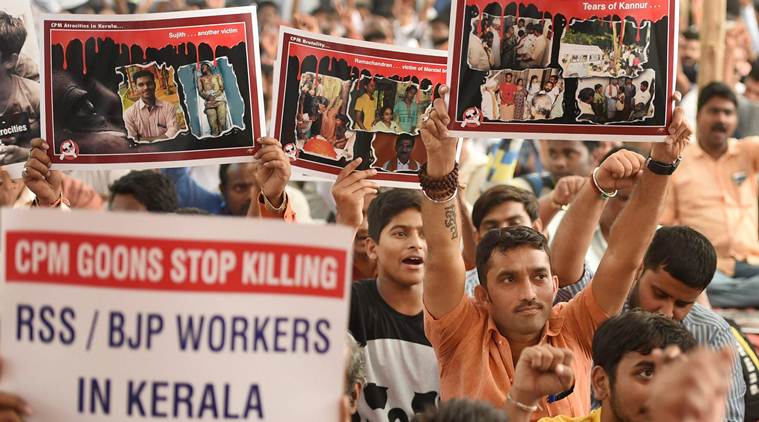 Members from the ‘FACT’ (The forum against communist terror) protest against attacks on RSS/BJP followers in Kerala in Mumbai. Credit: PTI

Multiple reports of violence have come in from Kerala in the last two days, the latest in political clashes that have been ongoing for years.

On Thursday, four RSS workers were injured after some persons hurled a crude bomb at the RSS office near Nadapuram in the district, police said.  The incident occurred at Kallachi around 8:30 pm. The injured have been identified as Babu, Vineesh, Sudhir and Sunil, they said.

The attack took place hours after an RSS functionary in Madhya Pradesh announced a Rs 1 crore bounty for beheading Kerala chief minister Pinarayi Vijayan. Kundan Chandrawat, ‘sah prachar pramukh’ of RSS in Ujjain, announced the reward to avenge the killing of RSS workers in Kerala, allegedly by CPI(M) cadre. The RSS distanced itself from Chandrawat’s remarks, saying it “never believed in violence and believes in democratic protest” and “condemns the emotional comments made by Kundan”, the Indian Express reported.

Two separate incidents of violence against CPI(M) workers were reported hours after the attack on the RSS office. The police, according to News18, have also said that they suspect an RSS-BJP hand behind both these incidents. The CPI(M) office in Vishnumangalam was raided and set on fire in the middle of the night, the New Indian Express reported. No casualties were reported. “This office is a little away from the RSS office in Kallachi, that was attacked last night. It is after this that the CPI (M) office was set on fire. We suspect it to be a case of retaliatory attack,” a police official told The News Minute.

In another incident, three members of the DYFI – the youth wing of the CPI(M) – were attacked with sharp weapons, Indian Express reported. Rathish, Yousuf and Sudheesh were identified as those who were attacked. According to ANI, the police complaint named three BJP members for the attack.

Meanwhile, the Kerala assembly today witnessed an uproar during the budget presentation with the Congress-led opposition staging a walk out, alleging budget documents were leaked on social media.

The budget, presented by finance minister Thomas Issac, focused on infrastructure development, strengthening of social welfare measures, steps to enhance safety of women, giving impetus to public education and health. It is the second budget by the ruling CPI(M)-led LDF.

Trouble started as the nearly three-hour-long budget presentation reached its final stages, when opposition leader Ramesh Chennithala stood up and waved a set of papers alleging that the budget proposal was already available on social media even before being presented.

Taken aback by the sudden development, the chief minister insisted budget details had not been leaked but assured the opposition that their charge would be looked into. “When budget is being presented, what has already been tabled, it might have come on the social media and other media. We will examine what has happened,” he said.

Intervening on the matter, speaker P. Sreeramakrishnan said, “It is serious issue and we will look into it and make statement in the house later”.

Cutting short the presentation due to opposition sloganeering, Issac said “I have not seen what has come in the social media. I cannot give a reply without knowing what has happened”.