The Left Democratic Front is racing ahead as bleak leadership and partisan infighting cripple the Congress and BJP's electoral fortunes. 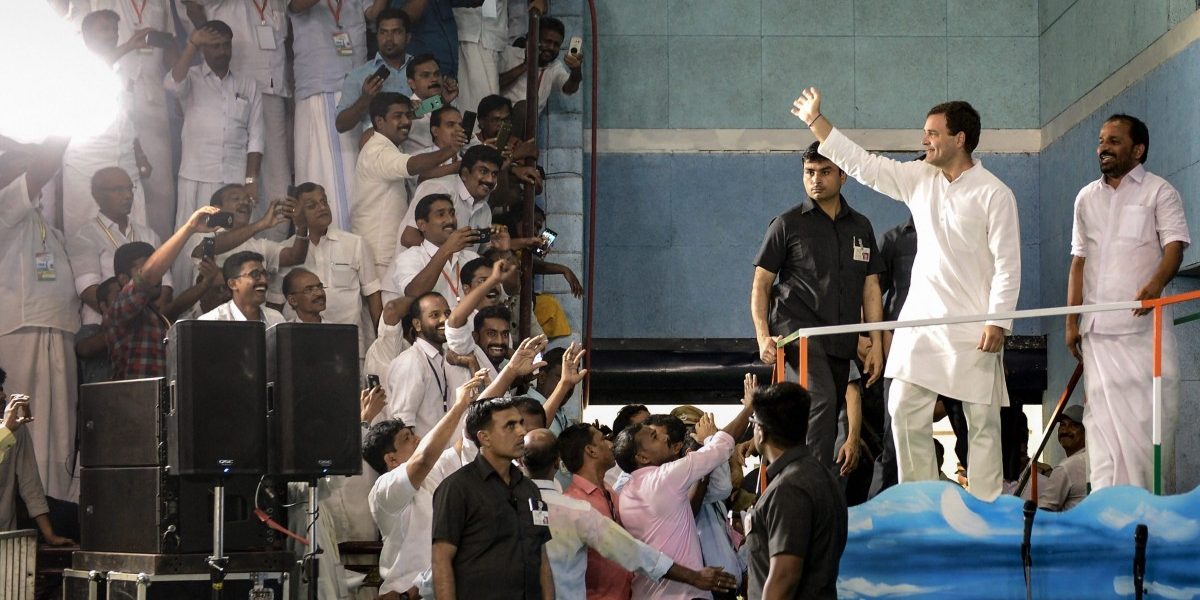 Congress president Rahul Gandhi waves at his supporters during an event in Thrissur, March 14, 2019. Credit: PTI

On March 11, Tom Vadakkan, the Delhi-based Congress leader from Kerala, was busy defending his party as the spokesperson of its All India Committee. He had appeared on several national and regional television channels attacking the NDA government and prime minister Narendra Modi, in particular on the Rafale deal. He had been religiously retweeting all the one-liners from the Congress leadership on Twitter along with his own jibes at the BJP leaders.

On March 14, he made an appearance at a press conference along with Union minister Ravi Shanker Prasad to announce his exit from the grand old party to join the BJP. He put the blame squarely on the leadership of the Congress party, which he had represented on television debates barely 72 hours earlier.

At the press conference, he highlighted his deep disappointment with his party as it “questioned the integrity of the armed forces” after the airstrikes in Pakistan’s Balakot.

“If a political party takes such a position that is against the country, then I’m left with no option but to leave the party,” said Vadakkan. He also showered praise on Modi’s ‘development narrative’. When journalists from Malayalam television channels asked him about his recent TV appearances, he had a prefabricated response ready for them.

‘Those were not my personal opinions at all. As a spokesperson, I was representing the party. It was all a scripted show.”

He went on to say that a spokesperson was just like an advocate appearing for a client. Much to his relief, none of the television reporters asked him whether he had been paid for his statements. Whilst he didn’t hide anything, he asked the reporters to investigate the developments within the Congress party for the last 72 hours.

In all fairness, Vadakkan’s exit will barely make any direct impact on the Congress’s voters but he has provided enough firepower to their opponent’s armoury, especially in Kerala, where the Communist Party of India (Marxist) led Left Democratic Front (LDF) has already taken a jibe at the Congress, claiming that the party has become a recruiting ground for the BJP across the country.

‘I have no wonder that Tom Vadakkan has jumped the ship, as Congress leaders, including many legislators, are making beelines in front of the BJP office, said chief minister Pinarayi Vijayan, immediately after news of his exit broke.

The switch-hit of Vadakkan was also perfectly timed by his saffron masters to coincide with Rahul Gandhi’s first address to an election rally in Kerala.

Even though many of the pre-poll surveys have predicted that the Congress-led front has an upper hand in the coming elections, the UDF camp is yet to rise or shine. The Congress is yet to decide on the candidates contesting from the state, while the in-fighting in the Kerala Congress has already sparked a pre-election headache for the United Democratic Front (UDF).

On March 12, this reporter visited the Pathanamthitta constituency, where the UDF is yet to zero in on its candidate. It was 11.30 am when we reached Rajiv Bhavan, the district committee office of the Congress. The office was virtually deserted with the exception of four people, including a sweeper and a secretary of the DCC inside.

The environment at the district committee office in Pathanamthitta was a radical departure from the regular buzz of khadi-clad local leaders and workers in any regular Congress office in Kerala.

The district president, Babu George, showed up after 15-20 minutes. While he was very cordial to us, he did not want to talk. “I would prefer to stay off the press until the declaration of our candidate. The PCC president has strictly instructed so,” he said.

“Babu George is expecting a ticket from this constituency, so it is wise for him to avoid trouble,” reasoned a district level leader of the party on the condition of anonymity. ‘The sitting MP, Anto Antony has become quite unpopular among our own cadre,” he clarified.

On the other hand, the CPIM candidate Veena George, a television journalist-turned-politician, who is a sitting MLA of Aranmula, was busy meeting prominent people in the constituency.

This is the general mood in the UDF camp as uncertainty still looms over the selection of candidates. Many of the senior leaders are reluctant, at least in public, to contest, due to undisclosed reasons. AICC general secretary K. C. Venugopal and PCC president Mullappalli Ramachandran have made it clear that they would not be contesting this time, despite being sitting MPs of Alappuzha and Vadakara respectively. Former Chief Minister Oommen Chandy, also, has informed the party high command of his unavailability. The local leadership and the grassroots level workers want him to contest either from Idukky or Pathanamthitta, where they think he is certain to win.

“Oommen Chandy would like to focus in the state. Moreover, he is about to complete 50 years as a member of the Kerala legislative assembly. The opposition leadership is so weak now, that Ramesh Chennithala could not even capitalise on the flaws of the LDF Government. If OC had been at the helm, the situation would have been better for the UDF,” said Thomas Joseph, a retired school teacher and a supporter of the UDF in Pathanamthitta. 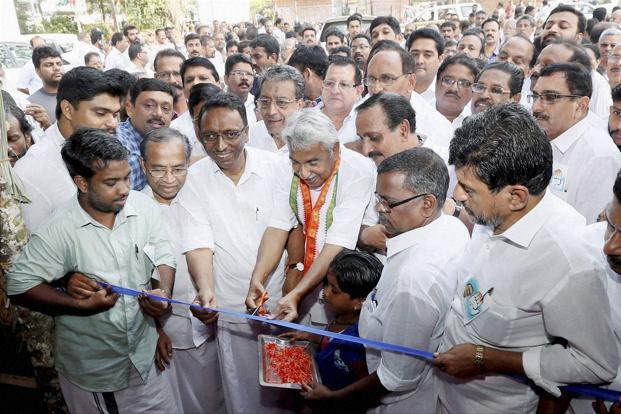 ‘The general trend is positive for us. There are many factors in our favour, ranging from the Sabarimala controversy to the political violence involving the CPIM and BJP-RSS. We are confident of pulling off a better result as compared to the last elections,” said Roji John, a Congress MLA from Angamali, which falls under the Chalakkudy parliament constituency.

“After yesterday’s rally by Rahul Gandhi, the workers seem to be rejuvenated and it is definitely going to have an impact,” said a confident Roji who chose not to comment on the on-going discussions and speculations about the possible candidates.

A saffron surge in Kerala?

The BJP-led NDA is also weathering trouble because of partisan infighting. The saffron outfit has called on Kummanam Rajasekharan, who was previously the governor of Mizoram, to contest from Thiruvananthapuram, where the BJP came close to defeating Shashi Tharoor the last time.

This time the LDF has also fielded a much stronger candidate in C. Divakaran of CPI as opposed to the last time when they placed an independent candidate, Dr Bennet Abrahan, who was pushed to a third position.

The Pathanamthitta constituency, where the Sabarimala shrine is located, has been a source of polarisation for the Sangh parivar. According to sources, a major faction within the party wants general secretary K. Surendran as the candidate for this constituency instead of party state president P. S. Sreedharan Pillai. They believe that Surendran, having been at the forefront of the Sabarimala agitation and having spent 20 days in judicial custody, is likely to garner more votes than the state president. This obvious divide within the party is reflected in its inability to finalise on a list of candidates. 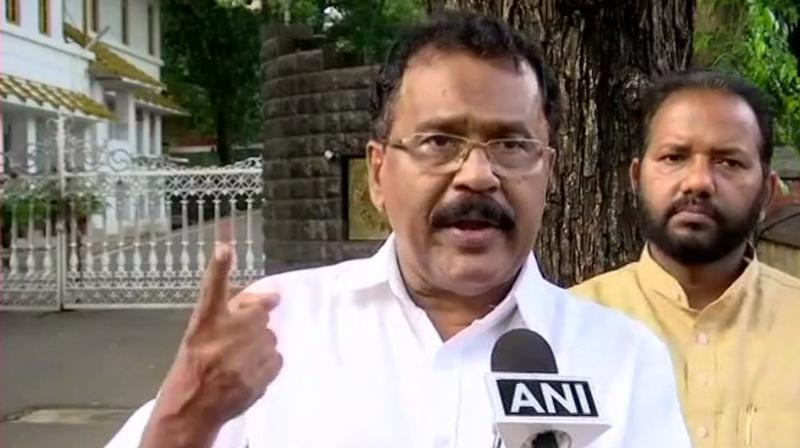 This time the BJP is eying a breakthrough in the state, courtesy of the Sabarimala controversy. With the Nair Service Society (NSS) rallying behind the Ayyappa Karma Samithi (Action committee for Lord Ayyappa) and its agitation, the party believes that the equation and its electoral fortunes across the state may change this time. The saffron party feels that the Ayyappa effect would influence at least five of the twenty constituencies namely, Thiruvananthapuram, Pathanamthitta, Thrissur, Alappuzha and Palakkad.

“Look at Pathanamthitta, it is a Hindu dominated constituency. After the Sabarimala issue, our support base has strengthened considerably. The women voters will whole heartedly support us this time. So we are eying nothing but a surprise victory here,” said Mini Harikumar, the district president of Mahila Morcha, who led several protests against the entry of young women into the shrine. ‘The wind is against the state government, and the UDF is not going to gain as the voters know about their double speak on the temple issue. They did want to fish from the stream without getting their hand wet, which is not going to happen.”

Another worrisome factor for the BJP-led NDA is the stance taken by the SNDP yogam and its leader Vellappally Natesan, who is now openly supporting the LDF and the CPIM. The Bharat Dharma Jana Sena (BDJS), a political outfit floated by the yogam leadership, is still in the NDA, but Vellappally has walked out of it. The BJP wants his son Thushar Vellappally, the leader of the BDJS to contest from the Trissur constituency.

“Vellappally Natesan may be openly supporting the left parties, but his organisation will not go that way’, feels a senior BJP leader.

The poll scenario in Kerala is far from clear, with the UDF and the NDA yet to finalise their candidates. Meanwhile, the LDF candidates have completed the initial phase of its campaign work. While this trait of eleventh-hour decisions is not unusual for the UDF, but for the BJP and the Sangh parivar, this could be an ominous sign.