AAP national executive member has blamed the 'pettiness’ of PM Modi; however, there had been no confirmation from the MEA or the US on their participation. 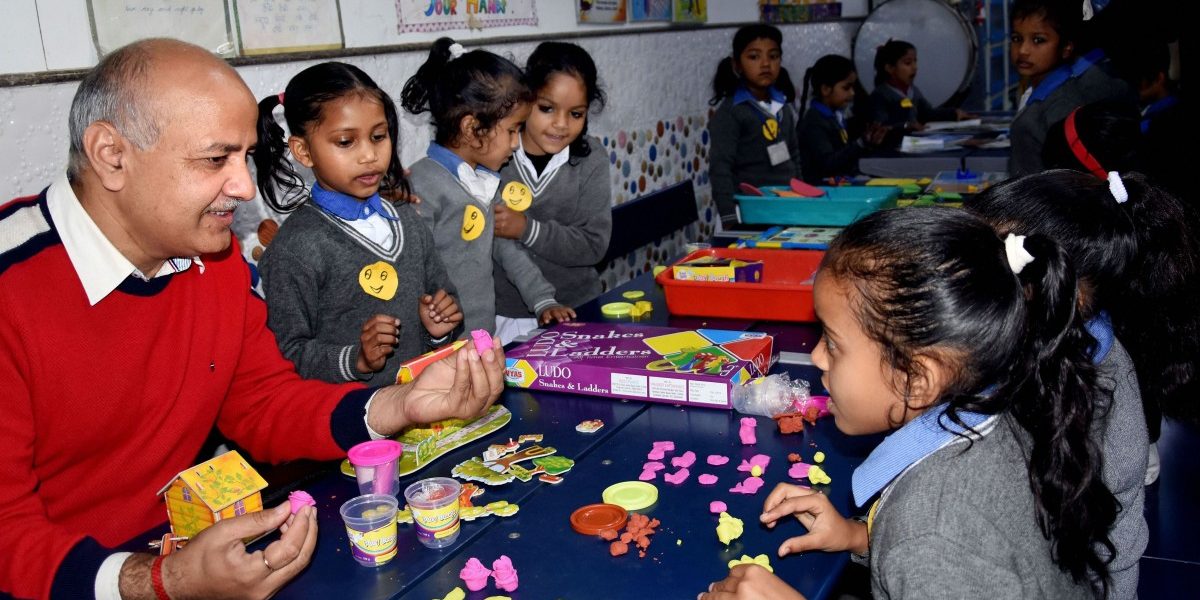 Delhi deputy CM Manish Sisodia interacts with schoolchildren at a happiness class at a government school in Vinod Nagar on February 22, 2020. Photo: PTI

New Delhi: While Delhi chief minister Arvind Kejriwal and deputy CM Manish Sisodia were initially expected to receive the First Lady of the United States Melania Trump at a Delhi government school on February 25, where she wanted to attend a ‘happiness class’, the two Aam Aadmi Party leaders have been told that they are not on the list of invitees.

Reacting to a news report which citing Delhi government sources said Kejriwal and Sisodia have been “dropped from the school event”, AAP national executive member Preeti Sharma Menon accused Prime Minister Narendra Modi for the change in plan. She tweeted that “there is no match for the pettiness of Narendra Modi”.

There is no match for the pettiness of @narendramodi
You may not invite @ArvindKejriwal @msisodia but their work speaks for them#TrumpIndiaVisit https://t.co/wp7y0haSXS

Incidentally, Melania Trump is scheduled to visit a Delhi government school to attend a ‘happiness class’ on the second day of the US First Couple’s visit to India. During the visit she is also expected to interact with a number of children and their teachers.

These classes were introduced by the AAP government in 2018 primarily to reduce stress among children. As part of the programme, children up to Class 8 are taught things like meditation and basic obedience and encouraged to take part in street plays and other activities. The mindfulness exercises and moral lessons are also aimed at making them stay stress free while undertaking studies.

It was earlier being stated by Delhi government sources that Melania would be received by the two prominent AAP leaders at the school. Also, it was said that they would take her on a tour of the school and provide insights into the public education experiment.

However, there was never any official confirmation from either the Ministry of External Affairs or the United States government on their participation at the event.

Melania is also expected to spend some time with the students during her visit. This will be the first time that a US first lady will visit a Delhi government school.

However, considering that AAP and Modi’s BJP were recently involved in a bitter electoral contest during Delhi assembly elections, there always existed a big question mark on the participation of the two senior AAP leaders – who now also wants to expand their party’s national footprint – at the event.

A journalist also tweeted about the two AAP leaders being dropped off the list and wondered why it was so.

Ok so apparently Delhi CM @ArvindKejriwal & Education Min @msisodia have been requested by the US Officials not to attend Delhi Govt School visit of First Lady Melania Trump on Tuesday..
Wondering what could be the reason??

He also noted that Gujarat chief minister Vijay Rupani would be a part of the grand show at the Motera stadium and similarly Uttar Pradesh chief minister Adityanath would be in Agra to receive the Trumps.

But @vijayrupanibjp will still be part of the grand #MoteraStadium show and should as the CM of Gujarat.. Also UP CM @myogiadityanath will be in Agra to receive the First Couple of .. https://t.co/fJ0OJrLrrn

While the Delhi government has not issued any official statement, Sisodia, who as education minister, in the Kejriwal government had overseen the implementation of the Happiness Curriculum in schools, only issued a general tweet lauding the programme.

He wrote how the course was helping children keep their mind focussed and living in harmony with their family and society. He also shared images of foreign media, including the Washington Post in the US, appreciating the initiative.