The state's sponsoring of pilgrimage for senior citizens and their spouse and attendants, and providing for more camps for 'kanwariyas' has raised eyebrows. 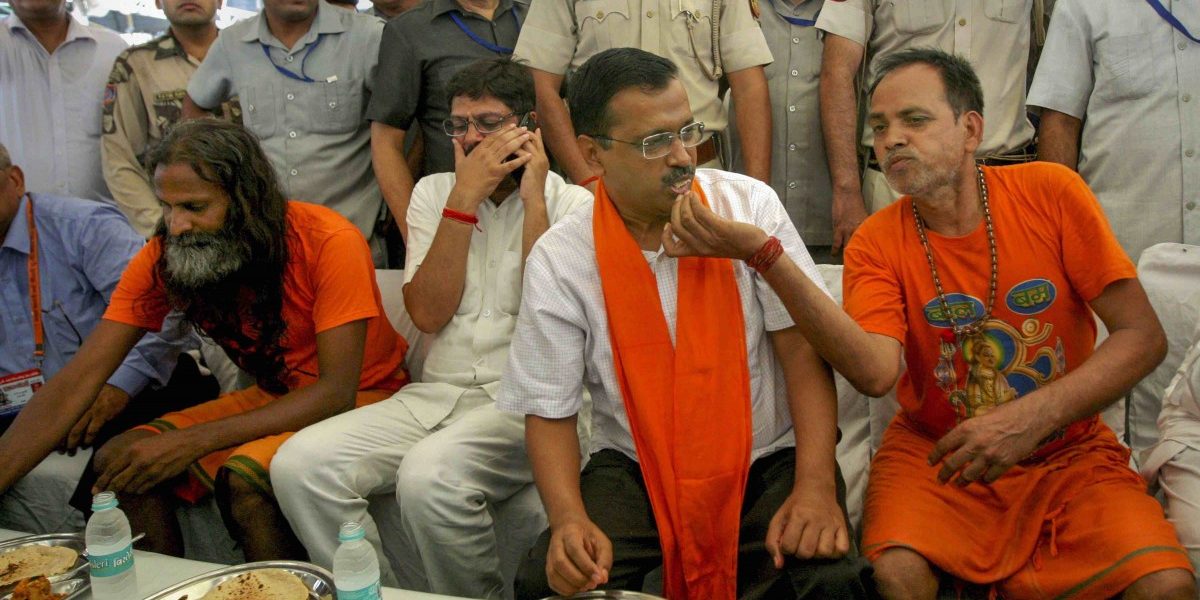 New Delhi: When in 2012, Shivraj Singh Chouhan, then Madhya Pradesh chief minister, launched the ‘Chief Minister Pilgrimage Scheme‘ – mostly covering Hindu religious sites – the leader of the opposition, Ajay Singh of Congress alleged a ‘Hindutva agenda’ behind the decision of the BJP government.

No such allegations were, however, levelled against the Aam Aadmi Party (AAP) government in Delhi when its chief Arvind Kejriwal launched a similar scheme last year. The reason being that the principal opposition party in the state, the BJP, practices a brand of politics in which it would have found it difficult to criticise the AAP’s decision.

The MP government’s scheme envisaged sending a minimum of one lakh people on a state-sponsored pilgrimage each year. It was said that the followers of “all the religions and communities can undertake a journey to any pilgrimage centre of their choice”. However, the list of 15 centres of pilgrimage covered by the scheme – Badrinath, Kedarnath, Puri (Jagannath), Dwaraka, Haridwar, Amarnath, Vaishno Devi, Kashi, Tirupati, Ajmer Shareef, Gaya, Shirdi, Rameshwaram, Amritsar (Sikh) and Sammed Shikhar (Jain) – showed a clear skew.

‘Could the money not have been spent on better causes’

Though Madhya Pradesh was already subsidising a pilgrimage to Kailash Mansarovar (China-Tibet), and Hinglaj Mata temple and Nankana Sahib Gurdwara (both in Pakistan), the Congress leader had questioned the rationale behind expanding the scheme, saying it would have been better if instead of providing subsidy for such visits, the government had spent the money on the renovation of dilapidated temples and other religious places.

Such arguments, however, did not deter Kejriwal from launching his own pilgrimage scheme last December. He too set a target of assisting 77,000 senior citizens to undertake religious trips – earmarking a quota of 1,100 citizens for each of the 70 assembly constituencies.

Unlike Madhya Pradesh, where the subsidy was capped at 50% up to a maximum of Rs 30,000 per pilgrim, in Delhi, the scheme allowed “free pilgrimage” to the citizens along with their spouse. Moreover, it also allowed those above 70 to take along an attendant above the age of 20 – if the applicant or their spouse was above 70.

Earlier this month, while interacting with a batch of pilgrims, Kejriwal said, “This son of yours will send you on at least one tirth yatra (pilgrimage) in your lifetime.”

Claiming that his government has undertaken many development works for Delhi, he said, this scheme was an effort to “undertake a divine good deed”.

Acknowledging that taxpayers’ money was being used on the scheme, he said, “Even the people of Delhi are repaying their debt to the elderly because their tax is funding your pilgrimage.”

At the event, one of the speakers even equated Kejriwal to the good son “Shravan Kumar”, while deputy chief minister Manish Sisodia noted how he directed that the pilgrims travel in air-conditioned coaches instead of non-AC sleeper class.

Camps for Kanwar yatra increase by 73%

Kejriwal’s affection for pilgrims has also transcended to the Kanwar yatra undertaken by devotees of Lord Shiva, who visit Haridwar, Gomukh and Gangotri in Uttarakhand and Sultanganj in Bihar to fetch holy water of the Ganges during the auspicious Hindu month of Shravan.

This year, with a few months to go for the Delhi assembly elections, the government set up 173 kanwar camps across the national capital – significantly higher than 100 set up last year.

In fact, Kejriwal on Monday spoke about how his government has “extended all the necessary facilities in the camps for the ease of kanwariyas” while visiting one such camp in Dilshad Garden in northeast Delhi.

Many of these camps are symbolic of secular harmony. Several Muslims donate money or goods for running them or volunteer their services. Recently, Seelampur MLA and former chairman of Delhi Haj Committee, Haji Ishraq Khan was seen at the Dilshad Garden camp helping look after kanwars.

However, while it is acceptable for private persons or charities to offer such services, the expanding role of the Delhi government in such matters has started raising eyebrows.