'There Was a Communication Gap Between Parties': K.C. Venugopal on Joint Presidential Candidate

In an interview with The Wire, the senior Congress leader reiterated that elections to the Congress president post will be conducted between August 20 and September 20 this year.

K.C. Venugopal, the All India Congress Committee (AICC) general secretary in charge of organisation, admits there was a “communication gap” in dealing with the other opposition parties when it came to finalising the candidature of Sharad Pawar as the joint presidential candidate. The Nationalist Congress Party (NCP) chief has since turned down the offer. Pawar’s name was not suggested by the Congress party, though it was willing to back any consensus candidate, he told The Wire.

Lashing out at the Agnipath scheme, Venugopal said the manner in which the government is trying to damage the armed forces is “anti-national” and this is being done with an “agenda” in mind.

On Rahul Gandhi’s questioning by the ED, he said, the BJP’s focus is to make the Congress leader look like a “useless person” and set an example for opposition leaders who take a strong stance against Prime Minister Narendra Modi.

Venugopal was speaking to Meetu Jain. Edited excerpts from the conversation follow.

The question on everybody’s mind is that the Congress is suddenly galvanised with the Enforcement Directorate’s questioning Mr Rahul Gandhi. Your workers are out on the streets and this is something you wanted even in your Udaipur chintan shivir. But the Congress was not so visible during demonetisation, during the COVID-19 lockdown or even against the Agnipath scheme. Why is that?

This is totally baseless. When demonetisation was happening which party agitated other than the Congress? We even had a committee headed by D.K. Shivakumar and they have done a wonderful job all over India.The COVID-19 period was not the time to agitate but to be with the people. We have done maximum relief work. The entire PCC worked in helping migrant workers by giving food and medicines to them. That was not the time to agitate. But when the price rise [of fuels and food] happened, every week we are protesting.

But the kind of protests we are seeing now, everywhere Congress workers are being arrested, are doing dharna pradarshan…

That is your perception, I don’t agree. As the principal opposition party, we have done many agitations. On this issue, who is fighting Modi every day? The way the BJP government is bulldozing the common people, most people are afraid to speak. But Rahul Gandhi has taken a strong position against Narendra Modi’s anti-people policies. So the BJP and the Sangh parivar’s entire social media efforts are to target Rahul Gandhi, make him out to be a useless person.

He’s one of the main persons attacking them. So now with this ED case, our workers are feeling that without any reason, without much evidence, our leader has been dragged and grilled in such a way which hasn’t been done by any other government. This is happening because of his stance against Modi. Therefore, to silence his critics, Modi [is using the ED case] to show others, “You will also face this. Therefore, keep quiet.”

This message of intimidation that the Modi government is giving went into the minds of our workers. And therefore without much call, they are out on the streets. 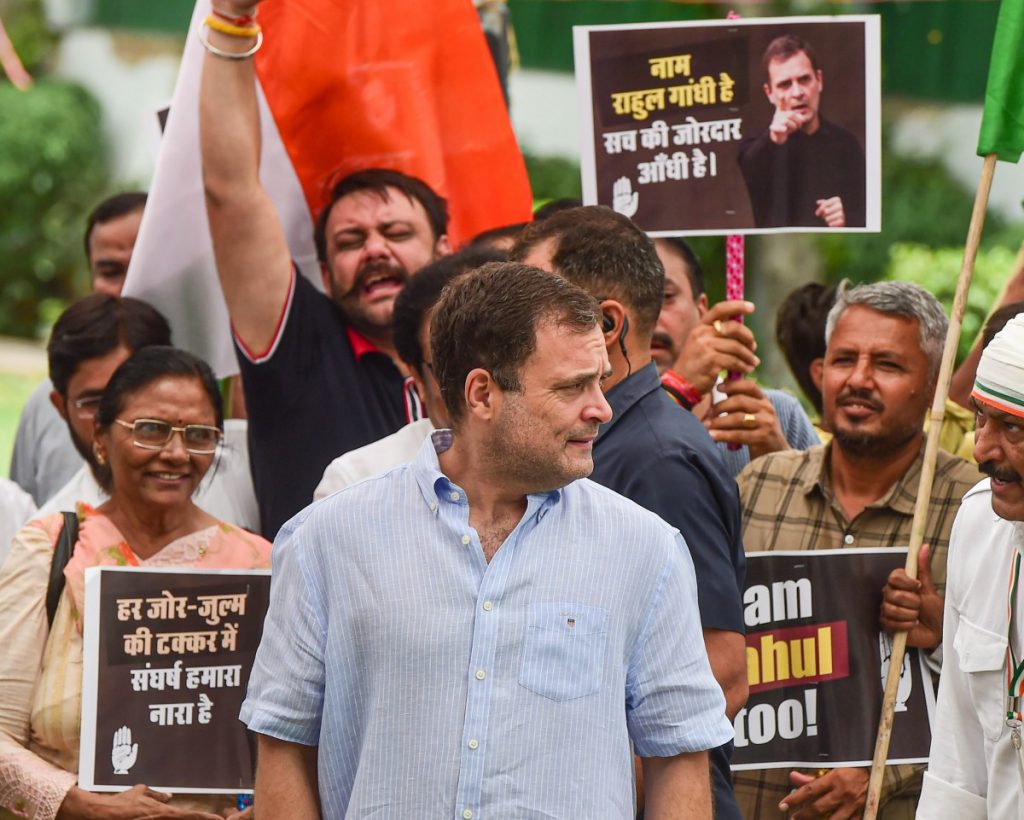 Even in 1977, the Shah Commission was set up after the Emergency to investigate misgovernance under Indira Gandhi. However, people came out in her support and she managed to turn the tide. Is this a Shah Commission 1977 moment for the Congress party?

I was a KSU worker in my state when Indira Gandhi was arrested without any reason. There was anger all over the country, an electric shock that came into the workers’ minds. I am not comparing Indira Gandhi and Rahulji, but now Rahul Gandhi is the person who is fighting against Modi.

So you think that kind of electric shock, that jolt is reaching the workers?

Yes, that type of effect you can see in the workers’ minds. Now, let us see [what will happen].

But the Shah Commission was set up to look at whether there was misgovernance during the Emergency. But this time, the allegations are of personal corruption, not misgovernance.

When Young India was formed initially, with Suman Dubey and Sam Pitroda, they transferred their shares to these four with the two majority shareholders being Sonia Gandhi and Rahul Gandhi. My point is why just the Gandhi family? There could have been other shareholders too. Ceasar’s wife should be seen to be above suspicion.

Here Ceasar’s wife is above suspicion. Oscar Fernandes was the general secretary in charge of organisation and Motilal Vora was the treasurer. As per the party constitution, the treasurer is dealing with all these properties and assets of the party.

But why was the majority stake with the Gandhis?

She was the Congress President.

But they could have been transferred to a lot of other people.

(Laughs) You can make anything. This is for the party to decide. At least that freedom has to be given to the party leadership, the party working committee, not outsiders, One thing, your question is answered. Whether they can take any property from this system?

Then what is the point? This question is also a baseless question because this is a non-profit company. They cannot take a single paise. So, whatever properties are in their hand, what does it matter?

Also Read: With a Taste of Delhi’s Hostile Police Force, Has the Congress Party Finally Awoken?

What is being leaked from the ED is that Rahul Gandhi has blamed Vora and said that he was responsible and he’s the one who is to blame.

(Laughs) Is it a non-biased agency? You are expecting this kind of leakage. The question asked by the ED, he cannot answer as per their expectations. His answer is according to law and according to the party’s stand. It may not be liked by the ED. I know him [Rahul Gandhi] personally. He will not blame anybody else just to escape. Rahul Gandiji is not like that.

Especially someone who’s dead and not around to defend himself?

He may have said, “As per the party constitution, this is handled by the treasurer only.” But I am sure, Rahulji will never blame Voraji. I think that was a fabricated story.

Now that there is an ED case, why don’t you just allow the law to take its course, allow the investigations…

But when the ED is questioning…

Let them question. We have done nothing wrong. You can verify with the Delhi Police. We have given a letter to Delhi Police to let our Congress Working Committee (CWC) members and senior leaders accompany Rahul Gandhi that day to show solidarity – until wherever we are allowed. We do not want to enter the ED office, but we want to walk with Rahul Gandhi. But they didn’t allow us, our senior leaders were not allowed to come out of the AICC office itself. They manhandled me, they manhandled Chidambaram, Shaktisinh Gohil. They didn’t allow members of parliament to walk with him. The provocation was done by the Delhi police. We know this is a politically motivated inquiry. The BJP has a political vendetta for Rahul Gandhi. The Congress party has to show that we will not surrender, we are with Rahul Gandhi. It is a party decision. If the government is not allowing us to show that, then quite naturally the workers will be angry.

And the agitation is all across the country. This proves that Rahul Gandhi still remains the most popular leader in the party.

Who is disputing that?

So is there a seal on Rahul Gandhi’s candidature for party president since he is the most popular?

But will there be an election?

On the issue of the other president, that is the election of the President of India, there is no unanimity, no one candidate. Sharad Pawar’s name was suggested, but he turned down the proposal. This indicates the opposition is in complete disarray.

I don’t agree with this at all. Two three weeks before itself, Sonia Gandhi had spoken to Mamata Banerjee, Chidambaram, Sitaram Yechury and others and clarified the Congress’s stand clearly. We need to have a common candidate and the Congress party is ready to go with anybody. We didn’t have any particular candidate. After that, Mamataji also responded, Pawarji also responded. Immediately after the announcement, Sonia Gandhi again communicated with all of them. At that point of time, she got COVID-19. Therefore, Mamataji sent a message to us and she called a meeting. A little bit of communication gap is there, I am agreeing… because other parties too complained to us that without discussing with us how can you call a meeting? But the Congress tried to address that concern also. We have given an open statement that our concern is to save the constitution. That is why we decided to send Mallikarjun Kharge, the leader of opposition, Jairam Ramesh and Randeep Surjewala to attend the meeting. They will attend again on June 21. We didn’t have a candidate.

So Pawar’s name was not suggested by the Congress?

No person’s name was suggested [by the Congress]. These were all media stories.

So who suggested Pawar’s name?

I don’t know. I didn’t attend the meeting. The Congress didn’t suggest any name. We suggested [that] a common candidate acceptable to all [should be nominated]. 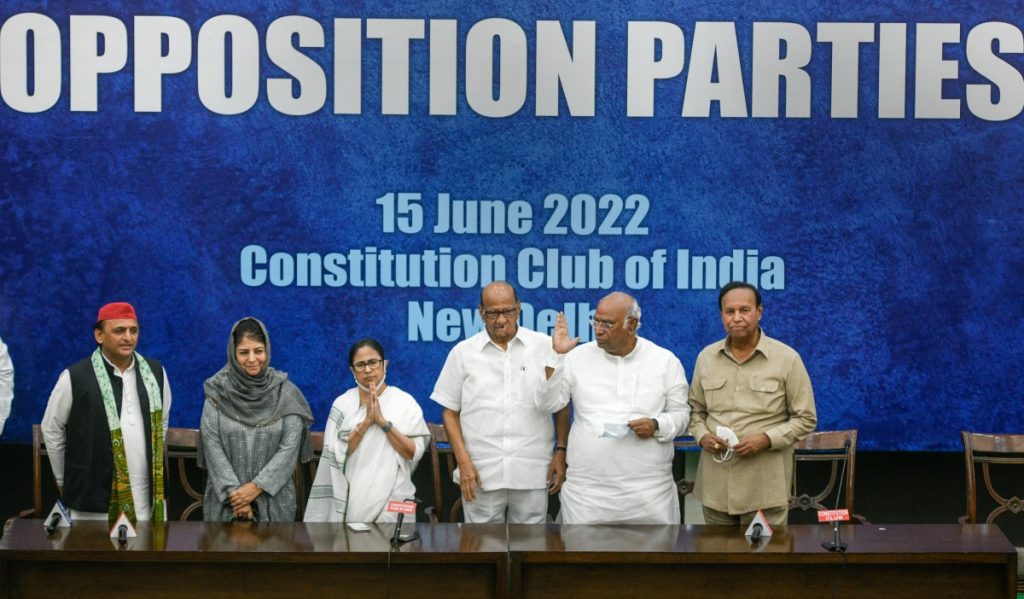 But coming back to your party, you do not appear to be in any hurry. The 2024 election is just two years away. You are not even agitating over the Agnipath issue, which you have been given on a platter.

Who told you we are not agitating? You check in Haryana, Himachal, Rajasthan. The first person who commented on this was Rahul Gandhi. We are doing a peaceful protest at Jantar Mantar in solidarity. But we don’t want to hijack [the protest by the aspirants].

But the government has already made concessions, offering reservations in the paramilitary forces, the state police, etc.

I heard one service chief say that after four years, they will get some experience. They can use that experience to explore other jobs or entrepreneurship. Is this the way to recruit people for the armed forces? Today, they announced there will be some reservations in civil aviation and the paramilitary. How can a government [change plans like] this? There should be a concrete idea. In civil aviation, which post will you will give? In civil aviation, which post is with the government now? Everything is with the private companies. All airports are given [to private entities]. Air India is given. Government has to come up with a concrete proposal.

So you are saying the government should have studied the scheme and come up with one concrete proposal?

I think they have some agenda. They are talking of nationality, the pride of jawans. They are talking that Congress is the one who won the war against Pakistan. So what is this now? I spoke to so many people in the armed forces. They are all demoralised now. The way they are trying to damage the forces is quite anti-national. They may have some agenda. They are saying they will give training for six months and they will be eligible for four years. After four years, 25% will be retained. Now they are saying 10% reservation. Basically, you are diluting the integrity of the armed forces.

So what could their agenda be?

That, we will find out.