The chargesheet in the case was filed on Monday against eight people, including two special police officers. 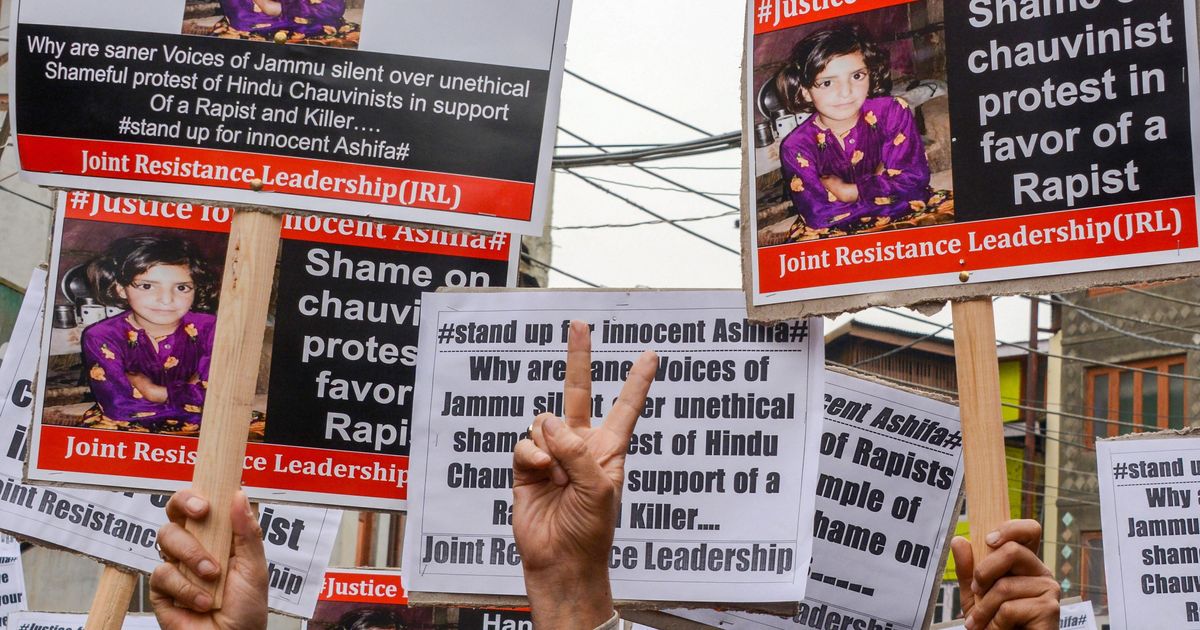 New Delhi: The chargesheet in the gangrape and murder of an eight-year-old nomad girl in Jammu’s Kathua – filed on Monday amid protests by a group of lawyers who attempted to stop crime branch officials from framing charges – have revealed chilling details about the crime as well as attempts of a police cover-up. Eight people, including two special police officers, have been arrested in connection with the crime.

The protesting lawyers, belonging to the bar association of Kathua district, shouted slogans against Crime Branch officials outside the courthouse, telling them to go back. The lawyers even offered free legal help to the accused.

According to Indian Express, the 18-page chargesheet, which was finally filed at 9:30 pm on April 9, says that the girl – who went missing from near her house in Rasana village of the district on January 10 when she had taken the family’s horses to a nearby pond to graze – was gangraped thrice inside a prayer hall following the performance of a “ritual”. One of the accused was called from Meerut to “satisfy his lust” and the victim was confined using sedatives. The accused strangled her and hit on her head twice with a stone to ensure she was dead.

Before this, another accused, who is a member of the police force, asked the others to “wait because he wanted to rape” her one last time. Her body was found a week later in the forests nearby.

According to the chargesheet, the entire abduction and sexual assault was planned and executed in order to “dislodge” a group of Bakherwal Muslim nomads from Rasana village – to which the victim belonged. The mastermind behind the entire episode is said to be one Sanji Ram, a retired revenue official who is among the eight arrested along with his son Vishal Jangotra and nephew, believed to be a juvenile.

The accused, as per the chargesheet, even attempted to bribe local policemen who had knowledge of where the girl had been kept. The policemen initially helped in covering up the crime.

The entire episode, wrapped in controversy since it came to light, has sparked immense outrage across the state. Following protests from the Bakherwal community, the government handed over the investigation to the J&K police’s crime branch.

Since the victim was a Muslim and those arrested for the crime are Hindu, the case has taken a communal – and political – turn. Sometime in mid-February, BJP leaders and members of the right-wing Hindu Ekta Manch carried out a protest march in support of special police officer (SPO) Deepak Khajuria, one of the accused in the case. These rallies continued to take place all through the month, and attracted special controversy because they used the national tricolour as part of their protest – perhaps the first time India’s flag had been deployed in defence of a man accused of rape.

According to the Indian Express, among those who backed the outfit were Lal Singh and Chander Prakash Ganga – who are BJP ministers in chief minister Mehbooba Mufti’s cabinet. However, a statement put out by the party’s state spokesperson sought to distance the BJP from the Hindu Manch.

The Wire had earlier reported that the police had first arrested a minor boy for his involvement in the crime. But after the allegation that the investigation was botched up, the case was handed over to the crime branch, which then went on to  arrest Khajuria.

Ironically, Khajuria was part of the police team that searched for the missing girl following registration of the case on January 12, at the Hiranagar police station. Khajuria was later also part of the police team that handed over the girl’s body to her family. Among the others arrested were Surinder Kumar, also an SPO, Rasana resident Parvesh Kumar, assistant sub-inspector Anand Dutta and head constable Tilak Raj in relation to the case. According to Indian Express, Dutta and Raj were arrested on charges of attempting to destroy evidence.

Initial investigations by the crime branch, which took over the case on January 22, revealed that the crime was committed to strike fear among nomads and drive them out of Kathua.

According to the chargesheet, the alleged mastermind, Sanji Ram, conspired to first kidnap and then rape and kill the girl, and SPO Khajuria and the juvenile too were “part of the conspiracy.”  They were “assigned tasks separately and individually”.

“…Deepak [Khajuria] along with his friend Vikram went to Bitu Medical shop at Kottah Morh on January 7 evening and purchased one strip of Epitril 0.5 mg containing 10 tablets by showing the prescription of his uncle, who has a psychiatric problem and is under treatment. Although the medicine as per the prescription was not available with Bitu, he gave him Epitril 0.05 mg instead of the medicine written on the prescription.’’

Ram, on the same day, instructed his nephew to “kidnap” the girl who “often comes to the forests behind their house for grazing her horses” – which was subsequently done just days later on January 10.

The girl was then taken to the devasthan – the prayer hall – and kept locked up “under the table over two plastic mats.” As per the chargesheet, the parents of the girl arrived at the prayer hall the next day in search of her. When they inquired about her whereabouts from Ram, they were told “that she may have gone to some relative’s house”. On the same day, January 11:

“Khajuria and the juvenile opened the devasthan and again sedated the girl by pushing sedatives into her mouth and forced her to drink water subsequently”.

“On January 11, the juvenile informed another accused Vishal Jangotra about the kidnapping of the girl telephonically and asked him to return from Meerut in case he wanted to satisfy his lust.’’

The following day, Jangotra arrived from Meerut 6 am, and less than three hours later, the “juvenile again went to the devasthan and administered three sedative tablets to the girl while she was unconscious with empty stomach.’’

By then, the search team – comprising Khajuria – was already looking for the eight-year-old girl.  The chargesheet further states: “Khajuria…came to the house of accused Sanji Ram with another police official namely Iftikar Wani… Khajuria advised the juvenile to ensure administering of sedatives to the victim in time,’’ and that during the investigation, “it transpired that the accused Ram had already taken the accused police officials into confidence and settled the deal with them.”

Then, on January 13, “Jangotra, the juvenile and accused Ram went to the devasthan where Ram performed rituals” and later, Jangotra “raped the nomad girl. Thereafter, the juvenile also raped the girl”. Ram thereafter told the others that it was time to kill her and “dump her in the forest”, the chargesheet says.

The murder – first allegedly unsuccessfully attempted by Khajuria and then allegedly done by the juvenile – has also been described in the chargesheet in horrific detail. The girl’s body was first dumped inside the prayer hall and then on January 15, Ram supposedly asked for it to be disposed in the jungle.