'Delhi couldn’t hold parliament elections in south Kashmir for almost two years and today these parties are taking pride in announcing that they have won uncontested.' 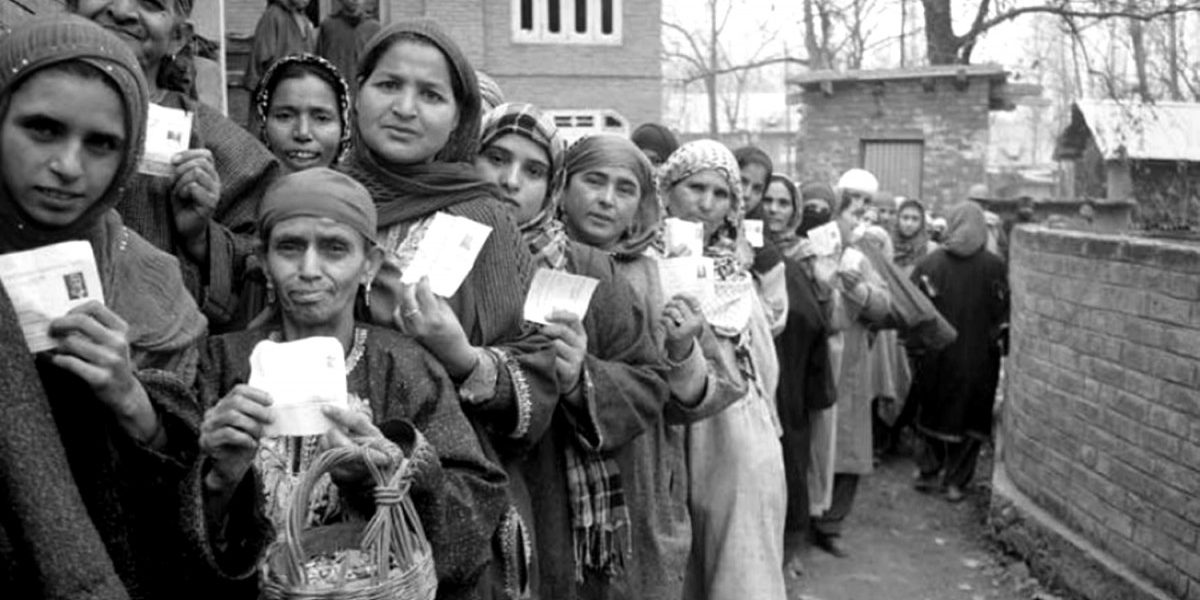 Srinagar: A day before the Valley goes to polls, a front-page ad by the J&K government in major local dailies enumerated the benefits of people exercising their voting rights. From participation in decision making to effective delivery of services and financial dividends at grassroots level, the government, in its last minute push to encourage participation in the elections to urban local Bodies, has promised “total change” in its functioning.

This message is, however, in contrast to the manner in which the government, political parties and state election body have kept the entire election process shrouded in secrecy ever since dates for the four-phased elections, starting October 8, were announced on September 15.

Officially, there is a complete information blockade about candidates and the political parties they belong to. To be precise, the candidates are non-existent on the ground and in official communications each of them is identified by a number instead of his/her name. There is no canvassing  and the parties in the fray haven’t held a single rally in support of their candidates.

“The mystery surrounding this election is a record of its own kind. Here, the electorate doesn’t have a whiff about candidates from their wards while contestants ensure their candidature remains a secret,” observed political commentator Javaid Ahmad.

The state election commission and contesting parties have, however, defended this secrecy, citing threats by militants to the candidates. “We have been strictly told to maintain confidentiality about the entire election process,” commented a senior official in the office of the state chief electoral officer. “Things will come to the fore only once the entire elections process is over.”

So deep is this secrecy that in some cases, the families of contestants have been surprised to know their kin have taken a plunge into electoral battle “fraught with danger”.

With the two largest regional parties – National Conference and People’s Democratic Party – deciding to stay away from polls over the Article 35A controversy and amid threats from militants, the BJP is set to make inroads in the Valley for the first time in electoral history of Kashmir. Till date, the party hasn’t won any electoral battle here – from parliamentary to assembly and civic polls in Kashmir. But this record is going to change this election.

In fact, the party is already in a celebratory mood. Its state spokesperson, Altaf Thakur, asserted the party has won 84 municipal wards uncontested across Kashmir, adding that almost 805 of these wards are in south Kashmir – a hotbed of home grown militancy.

There are a total of 598 municipal wards across the region, spread over 40 municipal bodies. The BJP is contesting in 325 wards. As per preliminary assessment, Thakur continued, the party would bag between 60% and 70% of municipal wards. “As of now we are set to head eight municipal bodies – Kulgam, Devsar, Qazigund, Pahalgam, Ashmuqam, Tral, Sopore and Budgam. We are expecting this number to go up to 15,” he claimed.

“This win is the outcome of four years of hard work. Today, we have a cadre of 4.30 lakh members alone in Kashmir,” he said. “Ek zamana tha ki hum kahtay thay Kashmir mein ek kanwal khilay; aaj tou laakhoon ki taddad mein kanwal khilay hai (There was a time when we would wish for a single lotus to bloom in Kashmir, today the Valley is in full bloom).”

Of 598 wards in the Valley, there are 244 wards where candidates have been declared winners uncontested, implying these wards have only a single contestant and won’t go to polls. Besides, there are at least 167 wards where not a single candidate is contesting elections. Both these categories of wards constitute more than 63% of total municipal segments across Kashmir and won’t witness an election at all.

Of the 167 wards with no candidate in fray, 126 wards fall in 20 municipal bodies across south Kashmir, spread over four districts and comprising half of the total wards across Kashmir. These include two municipal committees – Khrew in Pampore (with 17 wards and zero candidates) and Frisal in Anantnag (with 13 wards and zero candidates). In the remaining 18 municipal wards of the region, the percentage of vacant wards varies from 30% to 50%, including 73 wards which have a single nominee. In total, more than 60% of the wards in south Kashmir won’t witness elections.

“We are expecting closely fought elections in four out of 20 municipal bodies in south Kashmir – Anantnag Municipal Council, and Mattan, Kokernag and Dooru-Verinag municipal committees,” an election official told The Wire. The five districts of South Kashmir have witnessed a spurt in militancy and civilian protests over the past two years, which even forced the Election Commission of India to cancel the parliamentary by-poll due there in 2017.

Congress state president G.A. Mir however defended the poll arithmetic the contesting parties are engaged in, claiming victory in ward after ward before a single vote is cast. “This [winning election unopposed] is nothing new. Recently, Trinamool Congress won 30% of seats unopposed in West Bengal while the total number of such seats was more than 40%,” argued Mir. The party is contesting on 490 wards, and according to Mir, has won at least 110 wards unopposed. “As of now we are winning five municipal bodies,” he said.

But most of the municipal bodies the BJP and Congress claim to have won have nominees in less than half of the total wards, raising questions over the fate of the elections. Even Mir agreed that it was a “must as per election rules” that candidates should be in the fray in not less than half of the wards in a municipal body to pave way for a party with majority of wards in its kitty to claim victory. “Else, as per rules, the election body will have to take a call on whether it will go for re-election or take some other route,” he commented.

Political commentator Ahmad argued that New Delhi decided to go ahead with polls for two reasons: to try and give a semblance of peace in the Valley and to infuse new life in the political and electoral system which have “almost been wiped out” post the 2016 uprising. “That the parties struggled to even get candidates for most of the wards speaks of how people in Kashmir take these elections” he explained.

“When more than half of the total wards won’t witness any elections, doesn’t it raise questions about the genuineness of the exercise and the claims of those who claim to have won?” he asked.

Less than 40 hours before the polls, state authorities ordered the cutting off of internet across south Kashmir at around 7 pm on Saturday. The facility will be restored once the elections are over on Monday, said a senior police official.

In Srinagar and major towns across the Valley the candidates have been shifted to “secured accommodations”, a police official of the rank of senior superintendent of police told The Wire.

These accommodations include private hotels, residential quarters in police lines and those belonging to other departments. “We have been barred from visiting home till the elections are over,” said a candidate from north Kashmir who did not wish to be named, adding that all facilities including accommodation, food and other logistics have been provided by the government.

Asked how they spend their time, the candidate, a school dropout responded: “The election is the last thing we discuss. We are just passing time there.”

For the past few days, the footfall of J&K police and paramilitary forces has grown considerably on roads in the city and towns across Kashmir. With the fall of dusk, each exit and entry point and major crossing across city are taken over by the forces. The situation is alike in the towns.

While the Centre has already rushed 30,000 additional paramilitary personnel to the Valley, more than 56,000 of the troopers are already stationed in the region apart from J&K police’s own force of around one lakh personnel.

“Where else will you find that candidates can’t campaign and are instead caged and the entire region turned into a garrison?” asked National Conference general secretary Ali Mohammad Sagar. “Delhi couldn’t hold parliament elections in south Kashmir for almost two years and today these parties are taking pride in announcing that they have won uncontested,” said Sagar, questioning the credibility of the polls.