The deaths have led to differences between the state police and the army, as well as between coalition partners BJP and PDP. 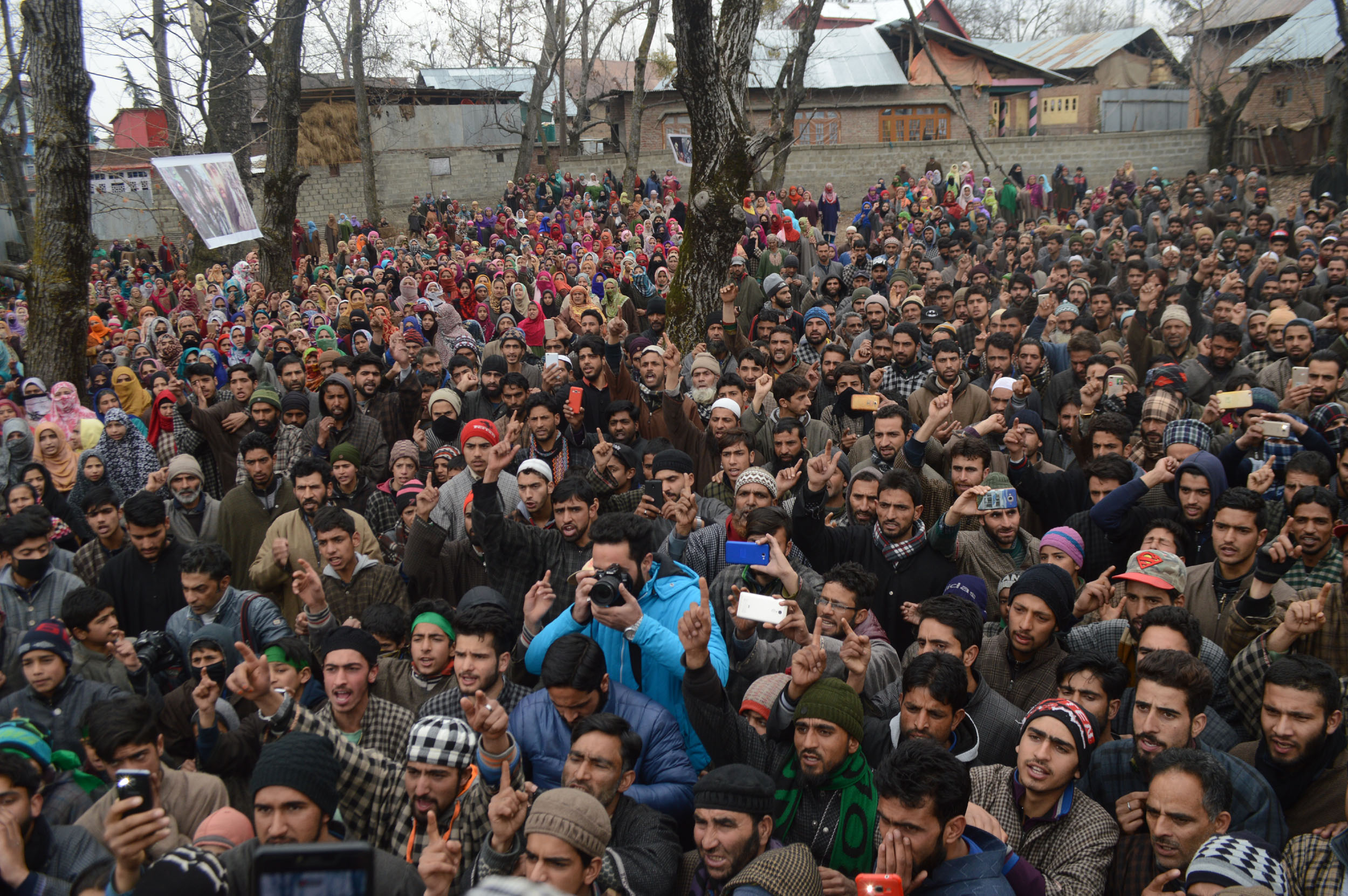 Shopian: Beyond deserted markets and past large tracts of barren apple orchards, Ganawpora, a nondescript village, was in deep mourning. Boys as young as eight-year-old Asif sat in small groups outside the Lone family’s house, whispering about the tragedy that struck the village on January 27. Inside, Javaid Ahmed Lone is in tears. “My son was a blossoming flower. They killed him in front of my eyes. How can a father live with pain of having seen his son die?” Lone cried.

His son, Suhail Ahmad, and another youth from the nearby Balpora village, Javaid Ahmad Bhat, were killed when army soldiers fired at youth who were part of a protest triggered by the army’s move to remove banners depicting pictures of militants and a black flag with ‘Kalima’ written on it.

Since then, the civilian death toll in Shopian has risen to five in less than two weeks. These fresh civilian killing have brought the Jammu and Kashmir police and army at loggerheads after the police registered a murder case against an army unit involved in the Ganawpora killings.

The FIR has even divided the ruling coalition partners, the Bharatiya Janata Party and People’s Democratic Party. The BJP is demanding that the case against the army be withdrawn, while chief minister Mehbooba Mufti has said that the case will be taken to a “logical conclusion”.

On January 24, a militant from Ganawpora village, Firdous Ahmad, was killed during an encounter in Chaigund village. He was the Lone family’s next-door neighbour; and it was outside his house that the banners and black flag had been placed. According to Lone, at around 10 am on January 27, an army patrol entered the village, demanding these be removed. 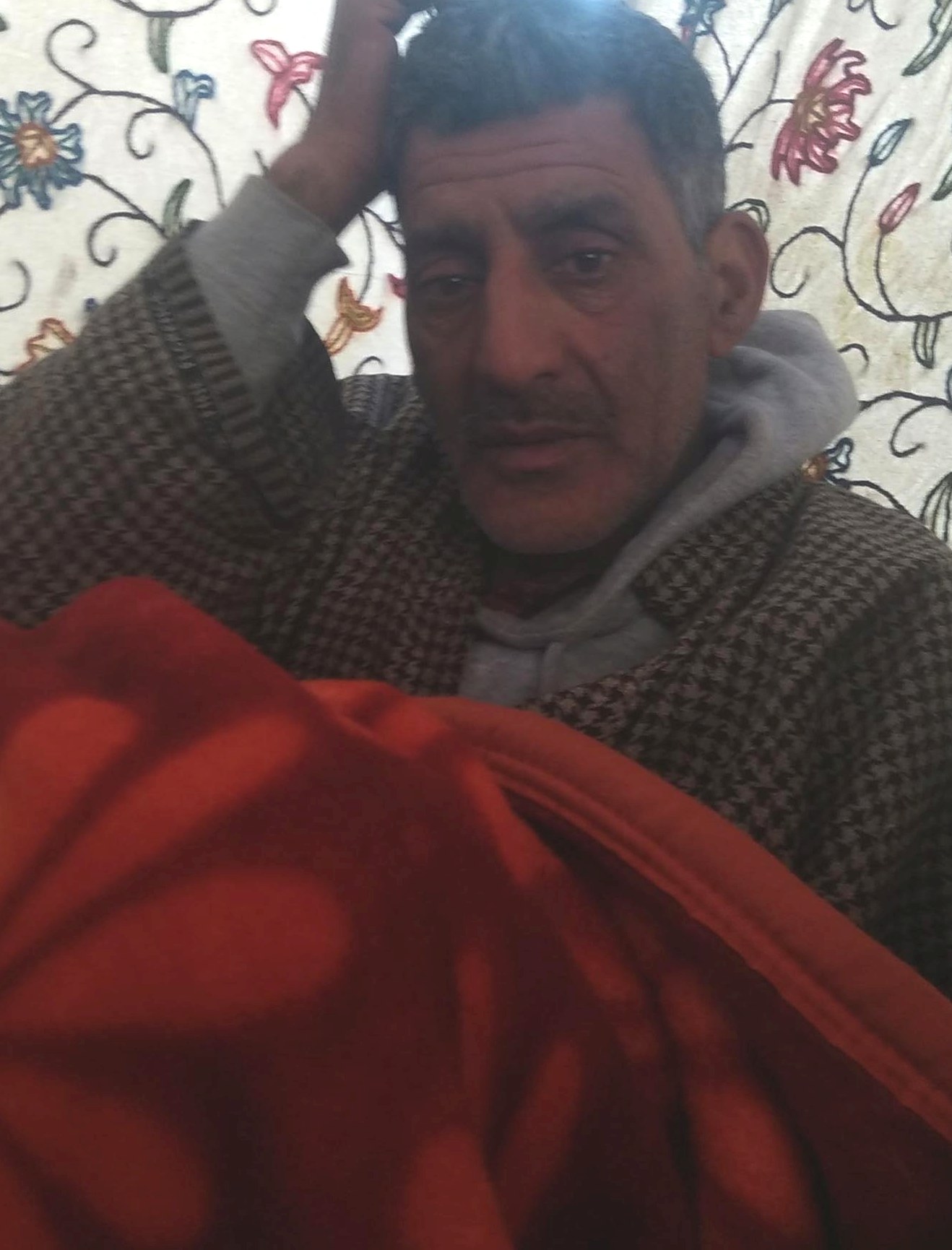 “The villagers objected to the demand…the elders intervened and after an argument the army returned,” said Lone.

But at around 3:30 pm, Lone said, the army came back, this time in large numbers, smashing windows of houses and resorting to aerial firing.

According to Lone, his son, a  Class 12 student, was inside his room when the army entered the village. Their house is located at the village entrance.

“The moment we heard the bullet shots, we immediately ran to the back of our house. The firing continued for around 30 minutes, though intermittently. Once it stopped, he (Ahmad) went out on the road…youth had gathered to protest against army highhandedness. I rushed out to ask my son to return. It was at this moment that the army, which was by now moving out of the village, fired directly at protestors. I saw my son collapsing on the ground. I ran towards him but he died in front of my eyes,” Lone said, his eyes brimming with tears.

Ahmad’s childhood friend Firdous Ahmad Khan said he was with Ahmad and Ganai (the two slain youth) when they were hit by bullets. “They were on my either side and suddenly both of them fell down. The next moment I saw them in pools of blood,” Khan told The Wire. 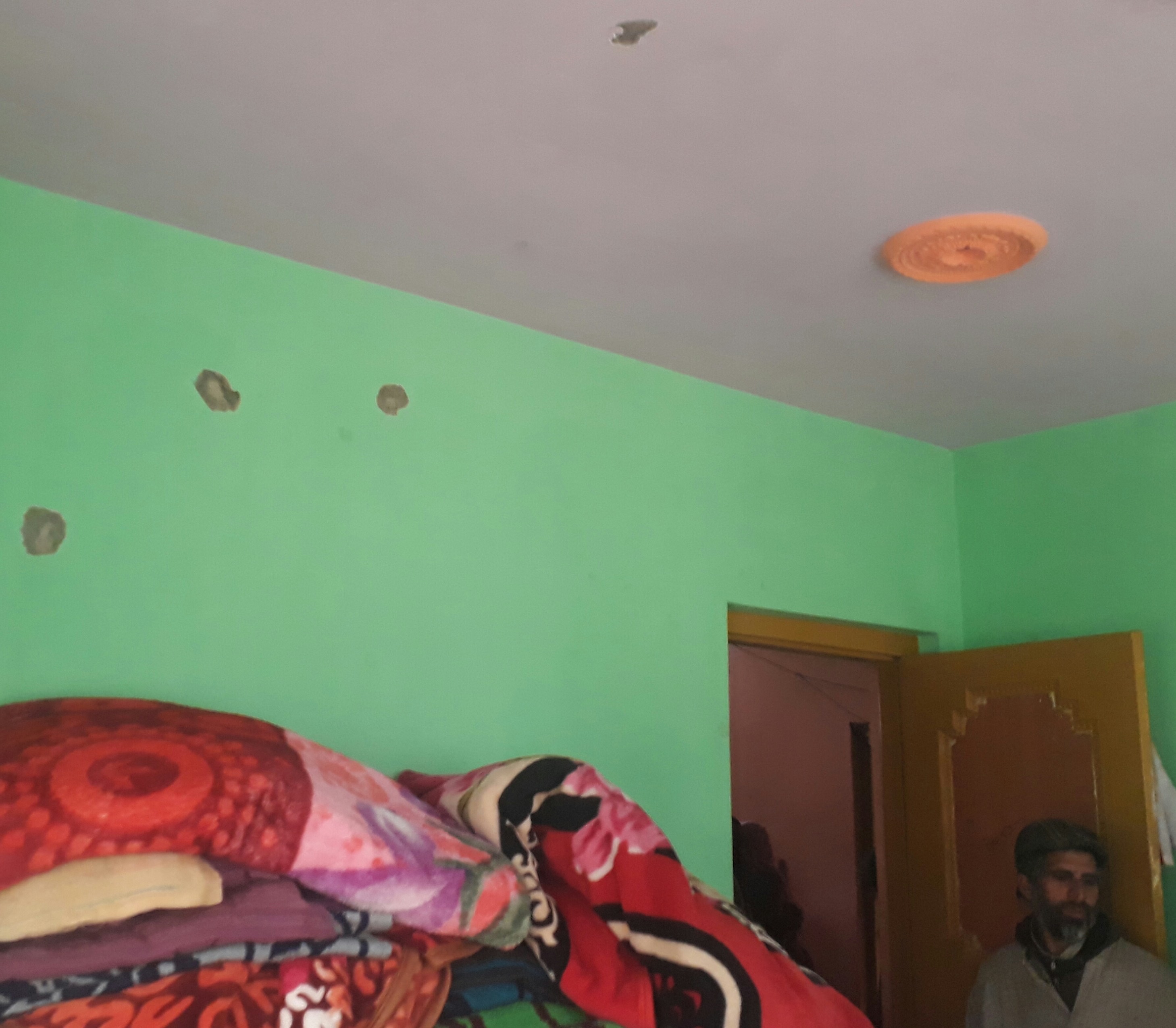 The army has said that its jawans fired in “self defence” when “protesters resorted to intense stone pelting and attempted to lynch an injured Junior Commissioned Officer”.

While it claimed that the number of protesters had swelled to 250, a group of village elders contested the claim, saying not more than 40 village youth were part of the protest.

“Considering extreme gravity of the situation Army was constrained to open fire in self defence to prevent lynching of JCO and burning of vehicle by mob,” a statement issued by the army said.

The statement came after police registered an FIR against the 10 Garhwal unit involved in the firing, and named Major Aditya in the case which has been registered under Sections 302 (murder), 307 (attempt to murder) and 336 (endangering life). The same day, the government ordered a magisterial probe by the deputy commissioner Shopian, asking him to submit a report in 15 days.

Tensions between the army and the Jammu and Kashmir police escalated further when the army filed its version of events, saying it opened firing in self-defence after seven of its personnel were injured.

The Gawanpora killings took place just four days after a minor boy, Shakir Ahmad Mir of Qalampora village in Shopian, fell to bullets allegedly fired by forces during the Chaigund encounter. Two militants, Firdous of Ganawpora and Sameer Ahmad Wani of Odoo, also in Shopian, were killed in the encounter.

Two teenage girls were also hit by bullets allegedly fired by the forces during the encounter. Both of them are battling for their lives at Srinagar’s Shere-e-Kashmir Institute of Medical Sciences (SKIMS).

“My son (Shakir Mir) was playing cricket in a nearby field along with other village boys when he was shot dead by forces,” said Mir’s father at his Qalampora house. The Jammu and Kashmir police have said that Shakir died in “cross firing”.

The situation in the district deteriorated further when another youth, Rayees Ahmad Ganai of Narpora village, was hit by a bullet in the head during army firing in Gawanpora and succumbed to his injuries on January 31. The next day, a ten-year-old boy, Musharaf Fayaz Najar of Chaigund village who suffered injuries when an unexploded shell went off near an encounter site in nearby Chaigund village, also died in hospital.

Doctors at SKIMS are trying their best to save the two girls, Saima and Sumaiya, cousins from Chaigun village, who were shot during the Chaigun encounter. Saima, who is in the intensive care unit, is the younger sister of slain militant Sameer.

Her uncle, Muhammad Ayoub Wani, said that while the encounter was going on in the village, Shakir’s killing led to massive protests. “We had no idea that our son (Sameer) is trapped in the encounter. Both (the two girls) were home and also came out when people were marching in protest. The forces resorted to firing and both of them were hit by bullets,” said Wani.

The civilian killings in two separate but related incidents are being seen as a blow to the government’s move to build bridges with people, particularly the youth, in south Kashmir. With anger simmering in the Valley, there is a shadow looming over the panchayat polls scheduled from February 15.

‘Meaningless’ FIRs and ‘no hope for justice’ 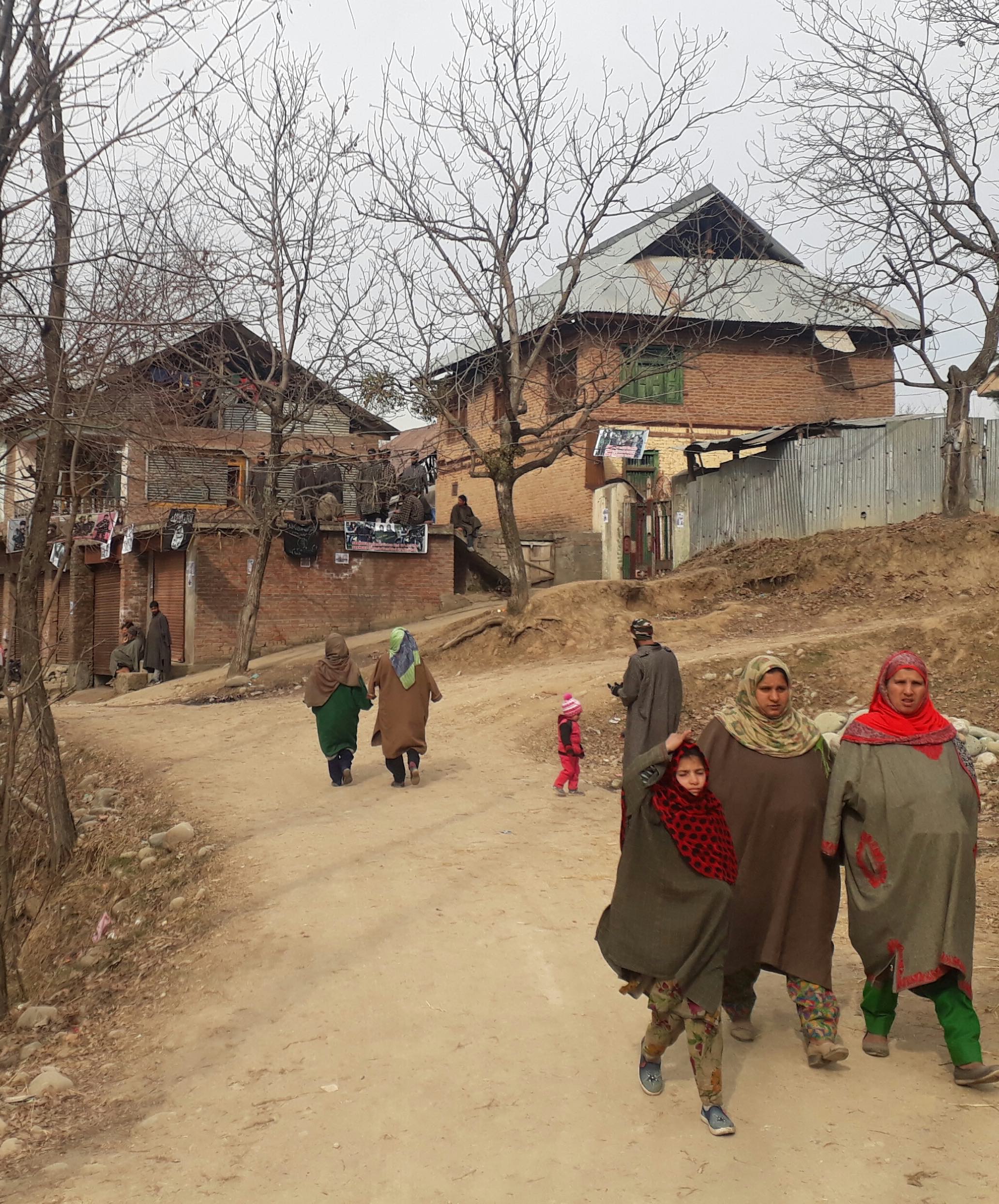 The entrance to Ganawpora village, with the houses of the Lone family and slain militant Firdous Ahmad in the background. Credit: Mudasir Ahmad

The state assembly, which is in middle of its budget session, has witnessed frequent disruptions by opposition parties in the past week over the killings. On Friday, National Conference working president Omar Abdullah demanded a probe by the police’s special investigation team into the killings.

“It is an extraordinary situation wherein army has lodged a counter FIR and therefore investigations should be carried out by a high-level team,” Abdullah said in the house.

His demand came after BJP MLA from Ramnagar R.S. Pathania sought the withdrawal of the FIR against the army. Another BJP legislator, Ravinder Raina, even dared the Jammu and Kashmir police to register “as many FIRs as you want”.

“There is nothing like magisterial enquiry. Army enjoys impunity under AFSPA and has its own court. Police FIRs are meaningless and don’t work,” Raina had said at a function in Jammu.

In her speech in the assembly, chief minister Mehbooba Mufti, however, backed police action, assuring people that the probe ordered into the Gawanpora killings would be taken to a “logical conclusion”.

Mehbooba even revealed that the J&K police had advised the army against going through the Gawanpora route in Shopian, as a civilian and two militants had been killed in an encounter in the area earlier.

Reacting to this war of words between the political parties in the house, political analyst Noor M. Baba argued that the scene was unfolding along “expected lines”. 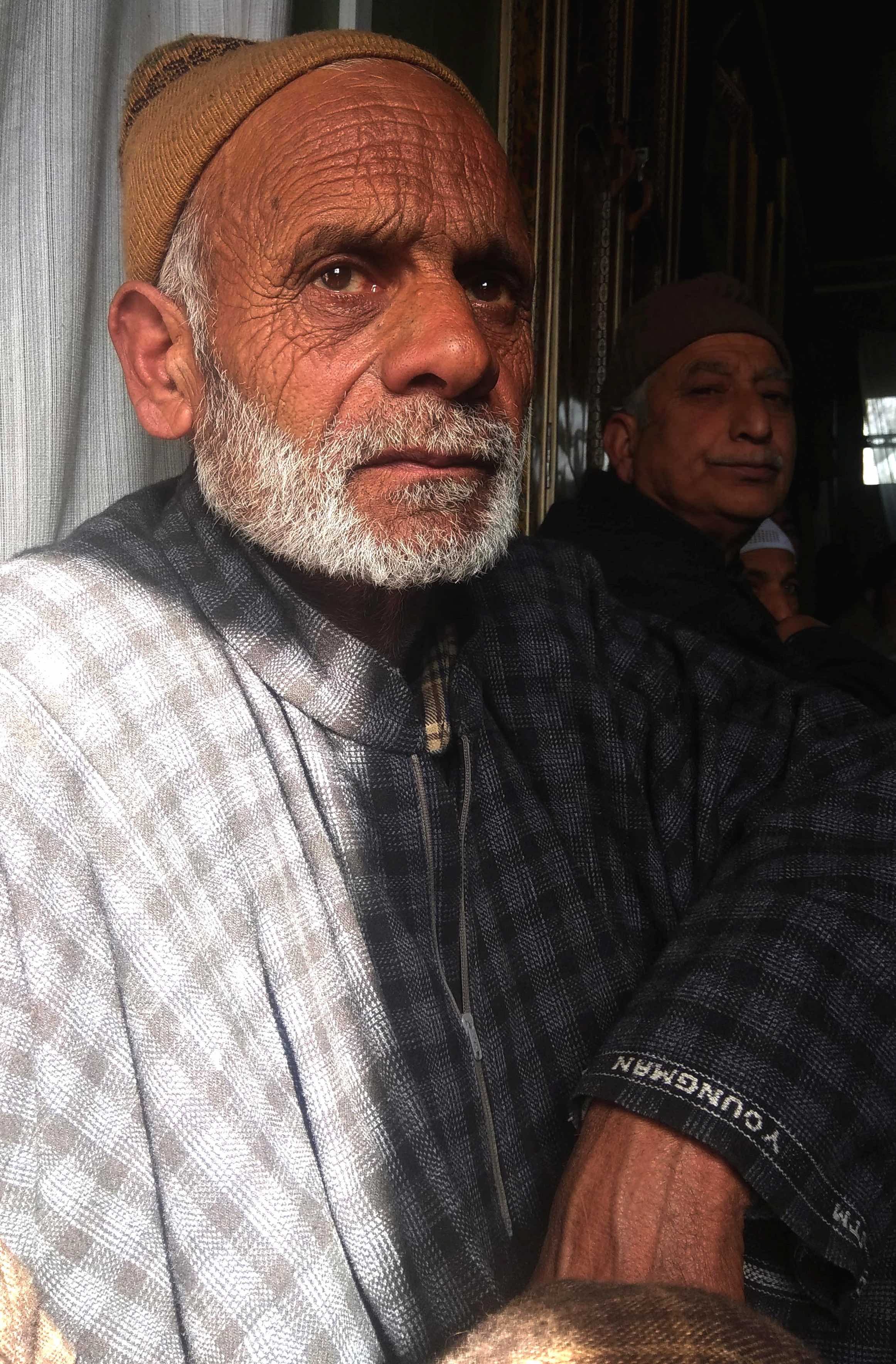 “Each party is merely trying to address their constituencies and are playing to the galleries,” he said, adding that the reality is that the armed forces enjoy immunity under the Armed Forces (Special Powers) Act and the government can’t initiate any action unless it gets sanction from the defence ministry.

Two such widely-reported cases are the Pathribal fake encounter and the Machil fake encounter, in which either the defence ministry didn’t give permission to prosecute accused soldiers or charges against the accused were dropped even after their conviction by the general court martial.

“What logical conclusion will you give to Shopian case when 47 out of 50 requests for prosecution of armed forces have been rejected by the Centre since 2000?” Abdullah asked the chief minister.

He was referring to information provided by the Centre to the Rajya Sabha on February 1, that of the 50 requests for prosecution of armed forces personnel in cases of human rights excesses in J&K from 2001 to 2016, at least 47 have been denied by the defence ministry while the other three cases are pending.

Statistics like these have meant that families of the civilians killed in Shopian have little hope for justice.

“This (the magisterial probe) is merely a time-buying tactic. They haven’t achieved anything in the past and nothing will come out this time too,” said Abdul Rashid Bhat, Javaid Ahmad’s father.