The massive crackdown on mainstream politicians has left the Valley leaders, workers and supporters in both anger and shock.

Srinagar: As Kashmir’s political leaders continue to be imprisoned or under house arrest for the ninth straight day, there is no word from the government about the reasons for clamping down on the mainstream camp.

The who’s who of the Valley’s political class have been detained. One among them is a former junior external affairs minister, another is an ex-Union cabinet minister. They both have been chief ministers of J&K in the past. The third was the chief minister of the last regime in J&K.

All three of them – Omar Abdullah, Farooq Abdullah and Mehbooba Mufti – besides many former state cabinet ministers, ex-lawmakers, party heads and scores of political leaders are among those who were rounded up by the J&K police, in one of the massive crackdowns by the government of India on Kashmir’s mainstream camp.

The clampdown started the night before the Centre read down Article 370 and Article 35, which accorded special status to the J&K in the Union of India, and divided the state into two union territories, on August 5. Criticism from all mainstream parties

As expected, the move evoked strong criticism from all political parties whose plank in the recently held state and parliament elections was to protect J&K’s unique position in the Union of India.

While Omar, the vice president of National Conference, described it an “onslaught” on the people of Jammu and Kashmir, Mehbooba, the Peoples Democratic Party president, tweeted that after revocation of Article 370, India will be seen as an “occupational force” in Kashmir.

For National Conference president, the senior Abdullah, the move was the “biggest betrayal” committed on the people of J&K, who, according to the veteran leader, had chosen secular India over Pakistan at the time of partition.

Various official and high-end accommodations, some of them located on the banks of the world famous Dal Lake, have been converted into jails.

Omar, who was the foreign affairs minister in the Atal Bihari Vajpayee-led government, has been jailed in Hari Niwas, the official residence of the state’s chief minister.

Mehbooba, who would defend the alliance with BJP as the only hope for resolving Kashmir’s political problem during her tenure as chief minister of the PDP-BJP alliance, too was shifted to a separate block in Hari Niwas.

The senior Abdullah, the ex-Union minister for renewable energy and three-time chief minister of J&K, is under house arrest at his Gupkar residence.

Hotel converted into a jail

The Centaur hotel on the banks of the Dal Lake has also been turned into a jail for ex-state ministers and political leaders like Peoples Conference chairman and former BJP ally, Sajjad Lone, his party leader Imran Ansari and Omar’s political advisor Tanveer Sadiq. Both Lone and Ansari were senior ministers in the previous state government.

National Conference senior leader and former law minister Ali Muhammad Sagar, PDP spokesperson Waheed-ur-Rehman Parra, deputy mayor Sheikh Imran are among more than 30 political leaders and workers who have been shifted there during past 13 days.

Less than a kilometer away is the posh Gupkar, where the residences of Kashmir political circle’s who’s who reside. It has been locked down. “All of them (political leaders) who live on the road have either been jailed or put under house arrest,” said a senior police official.

The situation is no different at Friends’ Colony, outside Srinagar airport, where senior politicians like National Conference’s Abdur Rahim Rather (ex-finance minister), Choudhary Ramzaan (former cabinet minister) and former water resource minister Saif-ud-Din Soz of Congress have been detained at their official residences.

“Soz sahab is under house arrest. He can neither come out nor can anybody go inside to meet him,” a policeman guarding his residence’s told The Wire.

Many others arrested so far, including High Court Bar Association’s president Mian Qayoom, some businessmen and Kashmiri youth have been imprisoned in jails in Agra, Jhodpur and Jammu. 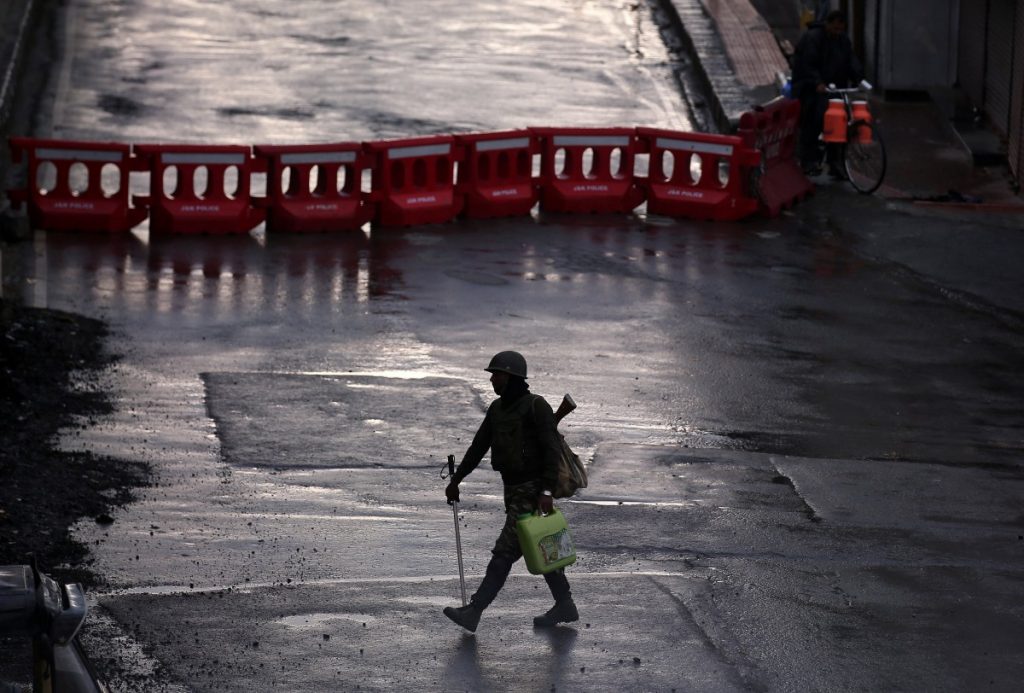 The move has left the Valley’s political leaders, their workers and supporters, in both anger and shock. “The government has already pushed Hurriyat leaders to the wall. Now they have decided to squeeze the space available for mainstream leaders. Does the government of India want to crush the mainstream altogether in Kashmir and run the state directly from New Delhi?” asked a National Conference member. He said choking political voices will have dangerous consequences for New Delhi.

“For the past 70 years, mainstream leaders have been holding the Indian flag high in the Valley, sometimes at the cost of the lives. See what they (the Centre) have done to the mainstream,” said a PDP leader.

“I fear there will be no mainstream in Kashmir now. The entire Valley is now on the other side of the divide,” he said.

A senior police official said more than 1,300 persons, including politicians, business leaders, lawyers and scores of youth, have been shifted to these new jails.

Now word from the government

But there is no word from the government on the charges under which the political leaders have been arrested. The government’s spokesperson, Rohit Kansal, held two media briefing in Srinagar on Tuesday. He was repeatedly asked about the charges. But each time, he ducked the question. “All the arrests have been made following the assessment made on the ground and in accordance with the law,” Kansal told the media in the morning.

Also Read: In Kashmir, the Plan Is Not Just to Control but Also Humiliate an Entire People

In the evening when Kansal was asked the same question several times, his response was also the same. “Local authorities are taking all such steps as may be necessary to maintain public order. I assure you, everything that is being done is being done under appropriate law,” Kansal told The Wire when asked about the charges against the jailed mainstream leaders.

To a separate question on when the government plans to end the communication blockade in Kashmir, Kansal acknowledged that people were facing “difficulties”. Landline and mobile services, along with the internet, remain suspended in Kashmir for the ninth straight day today.

“We are conscious of the difficulties faced by the people, but ‘reasonable restrictions’ are sometimes necessary in order to stop mischief mongers from carrying out untoward incidents,” he said.