Farooq Ahmad Dar said for him, justice will only be served if those who tied him to an army jeep are punished. 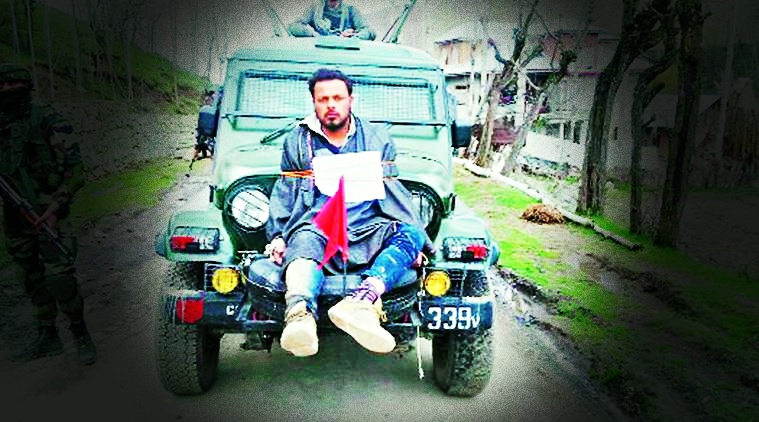 Srinagar: The Jammu and Kashmir police’s investigation into the Budgam human shield case has conclusively established that the victim, Farooq Ahmad Dar, did in fact cast his vote on the day of the Srinagar by-polls, April 9, before he was tied by an army major to the bonnet of a jeep and paraded through several villages for nearly five hours.

Corroborating the claims of 26-year-old Dar, a shawl weaver from Chill village, the investigation report notes that he was on way to his home from Gampora village, where he had gone to attend a condolence meeting at a relative’s house, when he was picked up by an army detachment in Utligam village.

Dar, the report, said was accompanied by his neighbour Hilal Ahmad Magray, a witness in the case.

“During investigation it came to the fore that Farooq Ahmad Dar has cast his vote at polling booth installed at his native village (and) after casting vote (on April 9) he left, along with Hilal Ahmad Magray for condolence meeting to Gampora village,” reads the police report, a copy of which has been accessed by The Wire.

The report goes on to add that Dar was picked up amidst stone pelting and treated as a “human shield under threat” by the army, which “kept him under wrongful confinement and paraded/moved him around within the area”.

Under the constitution, maintenance of law and order is a state subject but the report will be difficult to dismiss as ‘politically motivated’ since the J&K police reports to a coalition government of which the BJP is a major constituent.

Also read: The Human Shield Is Not Human

The police had ordered an investigation into the case after the incident evoked widespread condemnation, with human rights activists demanding action against Major Leetul Gogoi from 53 Rashtriya Rifles, who authorised the action, and his unit.

Under criticism, the army had justified strapping Dar to the vehicle claiming that he was “instigating a stone-pelting mob” and “could have been their ring leader”.

But on April 15, six days after the incident, Dar had told The Wire that he has “never ever in my life hurled stones on forces”.

“I am not able to understand why I was beaten ruthlessly and then tied to the vehicle. What was my crime?” Dar had said.

He had also shared with The Wire his voter slip serial number – 612 – to prove that he had cast his vote on the day when the parliamentary constituency spread over three districts of Budgam, Srinagar and Ganderbal witnessed the lowest ever turnout – 7% – in its electoral history.

Dar was among the few people who went out to cast their vote on the day when eight civilians were killed by security forces and mobs tried to attack some polling stations.

A police official said the staff at the polling booth in Chill confirmed to the investigation team  led by deputy superintendent of police, Magam, that Dar cast his vote. “It was also proven through the records kept by the election authorities concerned of those who had voted at the polling booth,” said the official.

The investigation report was submitted to the director general of police S.P. Vaid by the senior superintendent of police Budgam last month. In the report, the police also said that the army wrongfully confined Dar before releasing him in the evening of April 9.

Dar had told the police’s investigation team that he cast his vote and was not part of any stone-pelting mob.

“These were his first remarks when we summoned him for recording his statement,” said the police official.

Also read: I Was a Human Shield

Speaking to The Wire on Monday, Dar said the investigation has only proven what he has been saying ever since he was subjected to “a shocking human rights violation by the forces”.

“But what about punishing those who subjected me to these atrocities? Why is the police as well as the government silent on punishing the culprits?” asked Dar. “I will feel justice has been done in the case the day the perpetrators are brought to the book.”

The police investigation has come to the fore at a time when the state government has not yet fulfilled the State Human Rights Commission’s order that the government should give Dar Rs 10 lakh as compensation. An official in the state home ministry told The Wire that if the government abides by the SHRC recommendations this time, it will set a precedent for the future. Moreover, the official said, since the state government or police was not involved in the incident, they should not have to own responsibility.

On July 10, commission chairperson Justice (retiredd) Bilal Nazki observed that Dar had been subjected to “torture and humiliation” by the army, besides “wrongful confinement”, resulting in “psychiatric stress which may remain with him for the entire life”.

Though the commission asked the government to pay Rs 10 lakh compensation to Dar within six weeks, the recommendations have yet to be implemented almost three months later.

In a video of the incident that had gone viral on social media, Dar, wearing a pheran (a traditional winter cloak) and jeans, was seen tied to the bonnet of a moving army jeep, followed by an anti-mine vehicle and a bus ferrying army men.

“Aisa haal hoga pather walon ka, yeh haal hoga (Those who pelt stones will meet the same fate),” a warning was heard from inside the vehicle.

A medical examination of Dar at the Government Psychiatric Diseases Hospital in Srinagar confirmed that he had developed “psychological problems including acute stress disorder” following the incident.

However, on May 29, army chief Bipin Rawat had said that the army was facing a “dirty war” in Jammu and Kashmir which has to be fought through “innovative” ways, defending the use of Dar as a human shield. He subsequently awarded Major Gogoi a medal, event though the army’s own inquiry into the incident was pending at the time.

The SHRC order, however, argued that the law “doesn’t permit even chaining or handcuffing” of any person including convicts.

“How can one approve making an innocent person a human shield, and parading him chains tied to a jeep for hours,” Justice Nazki said in his order.