The central and state governments need to engage with the youth in Kashmir, channelising their energies into vocational training, employment opportunities and engagement with the rest of India. 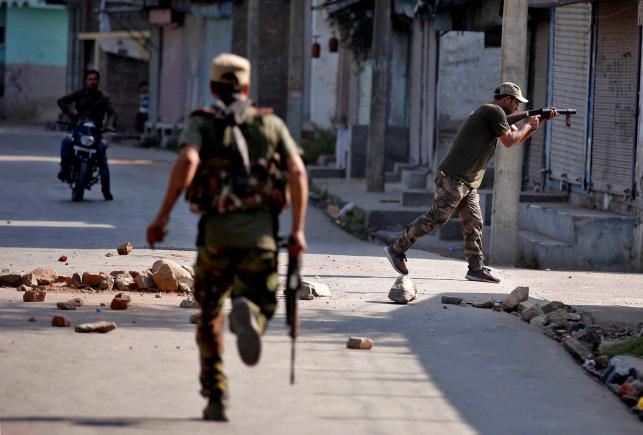 It is ironic that successive governments have always talked about how the Kashmir issue can’t be resolved using force – but repeatedly proceeded to attempt exactly that. Credit: Reuters

The current conflagration in Kashmir invokes a sense of déjà vu. Despite intermittent progress, the state seems to revert to the status quo every few years, with Kashmiri youth and the government locking horns once again. Except that this time around, the situation is far more portentous.

First, the current stone-pelting ‘movement’ has developed into a Catch-22 situation for the government. Whether it is videos of troops being jeered at and heckled by Kashmiri youth, or those showing protestors being used as ‘human shields’ – the dirt falls on the government. Coupled with increased tensions with both our traditional adversaries, this sense of alienation is fertile breeding ground for seditious elements.

Second, the demography of protestors, which consisted of youth in their mid to late 20s during the 2010 stone-pelting incidents, has shifted to much lower ages. A majority of the stone pelters (or ‘sangbaazis’, as adulated locally) are teenagers, which makes them far more risk taking, hot headed and reckless. The lethal combination of these two conditions creates a tinderbox where the halo of ‘David vs Goliath’ virtually writes itself, thus ensuring a swelling in the protestor’s ranks and a global ratcheting of the situation.

Increasing troops, curfews, arrests and skirmishes just exacerbates the already explosive situation. It is only a matter of time before some outnumbered security personnel are pushed over the brink and gun down ‘kids’ in self-defence, thus losing whatever moral high ground they have left.

It is ironic that successive governments have always talked about how the Kashmir issue can’t be resolved using force – but repeatedly proceeded to attempt exactly that. True, development cannot take place in an atmosphere of insecurity, but the question that needs to be answered is what the state or central governments have achieved, even during the relatively peaceful times or, more importantly, in the peaceful places of the Valley?

There are some hard facts we need to confront if we seek meaningful solutions to the Kashmir problem.

Kashmir is not seeking just a military or a political solution. Like most disturbed regions of the world, the foundations of this unrest lie in suboptimal governance and it is in that space where the government should manoeuvre first. This would also be supported by virtually all stakeholders.

For instance, most readers might not even know that Jammu and Kashmir still has the colonial practice of migrating the government machinery from Srinagar to Jammu and back, every year, thus effectively giving only six months of mindshare to each respective state. What prevents the government from stopping this largely self-serving practice of bureaucratic machinery being unavailable to its own people for half the year? Why can’t MLAs of Kashmir stay put in the Valley and push through their developmental projects, instead of this six month staccato? If a small state like Goa can have its own bureaucratic apparatus, what stops the government from creating principal secretaries and their allied counterparts for both Jammu and Kashmir, instead of shuttling the same lot from one state to another every six months ?

If Kashmir is to be treated like any other state, why not benchmark the time taken for approval of projects, rolling out of developmental initiatives and bureaucratic red tape compared to other progressive states like Gujarat and Maharashtra? Why can’t the Centre institute tax incentives for service and manufacturing industries to be set up in the Valley to attract external investments – as was successfully done in the northeast? Why can’t we communicate to the rest of India and the world, that only 15% of the state is affected by disturbances that are being portrayed as manifold – while the bulk of the state is safer than most metros of India?

The prime minister recently urged Kashmiri youth to choose between terrorism and tourism. For all the hype on tourism in Kashmir (and a reality check for those ‘patriotic mainlanders’ who want to teach Kashmir a lesson by boycotting tourism there) revenue from tourism is less than 10% and is seventh in terms of the source of revenue for the state. The total number of tourists, including the Amarnath pilgrims who visit Kashmir annually, is less than what Dubai services in two days.

Moreover, the bottleneck is not ‘the prevailing security situation’ as is propagated by vested interests. Instead, it is the lack of infrastructure. Ambitious master plans for creating tourism hubs gather dust awaiting approvals and even local investors face an uphill battle in just expansion of existing capacities – let alone new projects.

The Valley’s main sources of revenue are horticulture and handicrafts, not tourism. Both of these sectors are largely unaffected by unrest. As a matter of fact, some argue that they thrive during unrest. Unless we create a systematic ‘skin in the game’ by promoting service industry-based employment in the Valley – where even a few days of loss of work hurts financially – there is no strategic ‘disincentive for disturbance’. Threatening thousands of teenagers ‘with dire consequences’ if they come into the streets is not a long-term solution. Creating avenues for channelising their adolescent energies into vocational training, employment opportunities and engagement with the rest of India is the way to dispel this feeling of alienation and trust deficit.

But arguably, one of the gravest risk India faces is the vitriolic narrative by some sections of the politically organised and those on social media, whose standard operating procedure is to label anyone who is not acquiescent as unpatriotic. Any sensible narrative which runs contrary to their line is shredded by attacking the messenger. This apparently helps stoke a nationalistic fervour which translates into ‘front row TRPs’ and cowers down other points of view.

While this “McCarthysim” is definitely not limited to Kashmir, it has now begun to influence the national narrative which is further alienating the Valley. We need to build positive alternate narratives rather than constantly reacting with denial, jingoistic counter accusations or shutting down the internet. Or else, paradoxically, our domestic self-proclaimed patriots may surpass the damage that we usually attributed to the quintessential ‘foreign hand’.