'No Point of Voting': Pulwama Records 6.7% Turnout for DDC Polls, Lowest in the Valley

Saturday's District Development Council elections in J&K were the first polls held in the erstwhile state after Article 370 was scrapped in August 2019.

A scene of a polling booth during the first phase of the DDC elections at Gund in Ganderbal district of central Kashmir, Saturday, Nov. 28, 2020. Photo: PTI/S. Irfan

Pulwama: Early on Saturday morning in Pulwama’s Achgoza area, many people were sitting in front of shops discussing the ongoing District Development Council (DDC) elections. Everyone had an opinion vis-à-vis the elections but almost no one had cast a vote.

This hilly village has around 500 households and has always been restive area. The two polling booths in the village were down the slope on the outskirts of the village at a government high school. The path leading to the booth – dotted by the police and members of the paramilitary force – was a forbidden pathway for the villagers.

“Early morning some five-six people came and cast their vote. They left the polling booth from the other direction they had entered,” said a local staff member who works in the school. Deliberating as to why those who had voted left from the other exit, he said that they did not want to be seen and singled out by the villagers. “Casting a vote is akin to deception in the village,” he said.

The village has dilapidated roads and poor infrastructure. “There has been no development since ages, these elections are a total farce and have no meaning. They cannot change anything in the village,” said a local on the condition of anonymity.

The paramilitary forces guarding the polling staff were also puzzled by the lack of voter turnout. One of them said that in their hometown in Rajasthan, candidates spend lakhs of rupees for campaigning and votes for such elections. “I didn’t see any such atmosphere here,” a member of the paramilitary force said.

Four kilometers away from Achigoza is Drabgam village – an area which has earned the distinction of being a militant hotbed. The famous Hizb ul Mujahideen commander Sameer Tiger – who was gunned down in an encounter – was from the same village.

The village has regularly drifted in and out of news headlines for security cordons and human rights violations for the last several years.

Also read: Jammu and Kashmir: Seven Members of a Family Are Contesting the DDC Polls in Budgam

Not a single vote was cast out of 5500 eligible votes in the village. A villager working in his orchard adjacent to the polling booth told The Wire that “there is no point of voting. Tell me, if we vote, will there be a full stop innocent killings, tortures and abuses?”

Just see where those people who used to toe New Delhi’s line are nowadays, he added.

Pulwama district has witnessed a huge rise in militancy in recent years, especially after the death of Burhan Wani. People living in the district – mostly the youth – have alleged that treatment from the forces in the area has turned their lives into “hell.”

Incessant encounters and civilian killings in the area have further alienated the youth from the government. Notably, in Pulwama district, only 6.7% voting was recorded, the lowest in the Valley.

The upper reaches of the Pulwama district, where mostly the Gujjar community resides, witnessed relatively larger voting turnout. For instance in Sangerwani village, some 30 kilometres away from the main town of Pulwama, surrounded by pine trees and hutments, around 300 villagers cast their votes. 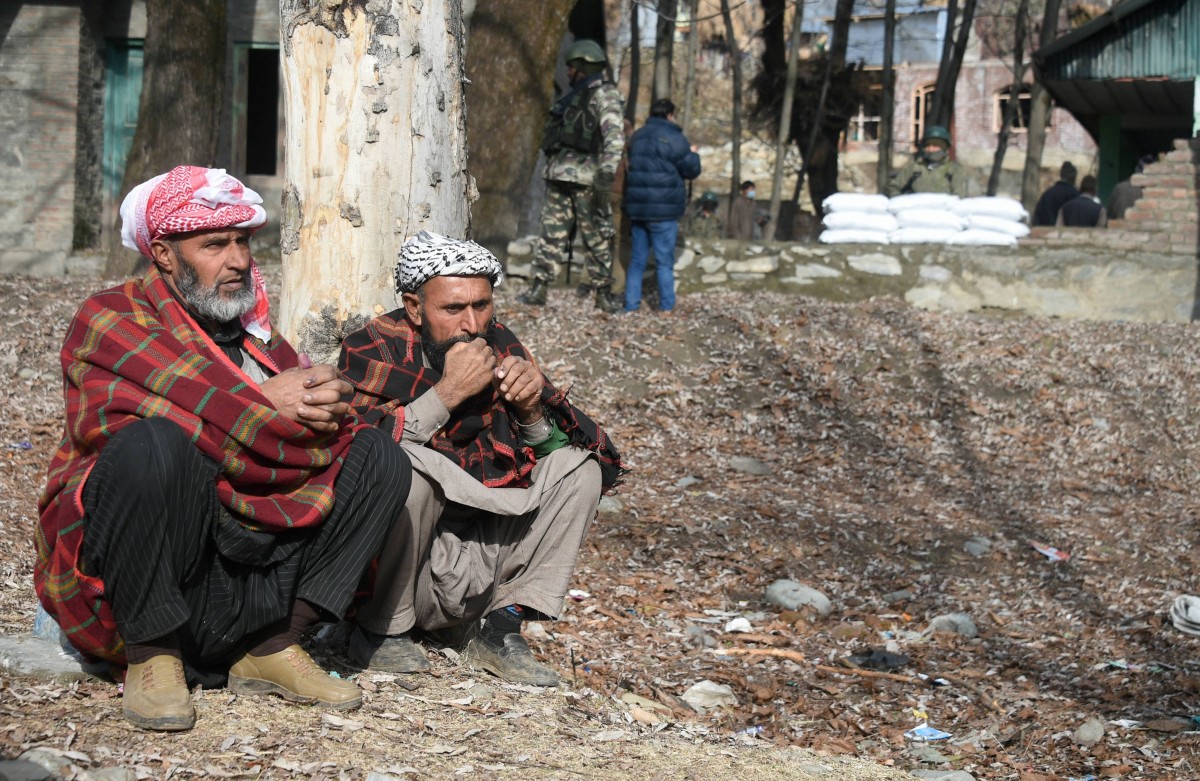 Voters wait at a polling station to cast their votes for the first phase of the District Development Council (DDC) elections in Thune area of Gund in Ganderbal district of central Kashmir, Saturday, Nov. 28, 2020.Photo: PTI/S. Irfan

Most of them said that recent action by the authorities against the Gujjar community has made many of them anxious and the candidates fighting in the DDC polls have promised to safeguard their rights.

“We are voting for only one purpose – we don’t want our land to be snatched from us,” said 65-year-old Abdul Majeed Gorsi, speaking about the issues his community was facing currently outside the polling booth. “If we lose these lands, we will die with hunger. We don’t have any other income source and we eat what we harvest from these lands,” he said.

The villagers have cast votes in favour of the candidate who is from their own community and has assured them that the decision taken by the authorities of land retrieval from Gujjars will be reversed.

In the adjacent village of Sangerwani, people shared a similar reason for voting. However, a few also said that none of the hamlets had witnessed any development despite multiple promises from leaders in previous elections.

Meanwhile, State Election Commissioner (SEC) K.K. Sharma in a press briefing said that amid the COVID-19 pandemic, a large number of people had participated in the first-ever DDC polls and 51.7% voting was recorded in phase one in the Jammu and Kashmir Union territory. Jammu recorded 64.2% polling while in Kashmir, 40.65% voting was recorded.

Saturday’s DDC elections in J&K were the first polls held in the erstwhile state after Article 370 was scrapped in August 2019.

SEC Sharma said that barring a small incident of stone-pelting in South Kashmir’s Kulgam district, the election process for the phase-1 of DDC polls was conducted peacefully.

“There was a small incident of stone-pelting (at Kulgam). Police have already taken cognizance of the incident,” he added

A total of 43 DDC constituencies went to polls where 7 lakh voters were registered.

Sharma said the first phase recorded large participation of people and most of the voting took place between 7 am and 8 am. “Out of the 362000 votes polled, 193,000 were male and 169,000 were females,” Sharma said. The SEC congratulated all the candidates, including those who fought independently, for taking part in the DDC polls.

Meanwhile, Inspector General of Police (IGP) Kashmir, Vijay Kumar, said that the overall situation had been under control throughout the Kashmir division with the exception of one minor incident of stone pelting at the CR Pora polling station in Kulgam district, in which one voter had sustained injuries.