'DDC Polls Are for Development; Nothing to Do With Kashmir Conflict': Budgam Candidate

Rayees Ahmad Wani has been a neighbour of slain militant Shakeel Wani, who was gunned down within six months of joining militancy.

A man casts his vote at the DDC polls in Budgam. Photo: Kaisar Andrabi

Budgam, Kashmir: The last two elections in the remote region of Pakherpora in central Kashmir’s Budgam district witnessed low or almost negligent voter turnout. This time, however, Pakherpora had relatively a better turnout and a sizeable percentage of voters queued outside the booths while braving the chilly weather on December 8.

The reason for the low turnout in Pakherpora is the lack of development in the area over the years. The region, which comes under the Charar-i-Sharief constituency, had its own public representative in the erstwhile state assembly for 37 years but did not have even a 50-bed hospital.

The village is located in the centre of the Pirpanjal range and attains significance owing to its proximity to the famous tourist destination, Yousmarg. There is also a shrine of the famous Sufi saint Syed Ali Aali Balakhi that makes it a frequent visiting destination for thousands of people across the Valley.

With the District Development Council (DDC) elections taking place for the first time in J&K, a 31-year old candidate from the village, Rayees Ahmad Wani, decided to contest elections and asked people to vote in his favour. He promised people development that the village has failed to see in the last few decades.

Wani, an advocate in the sub-district court in Charar-i-Sharief said that he had no plans to contest elections but was urged by his friends and relatives in the village to do so. 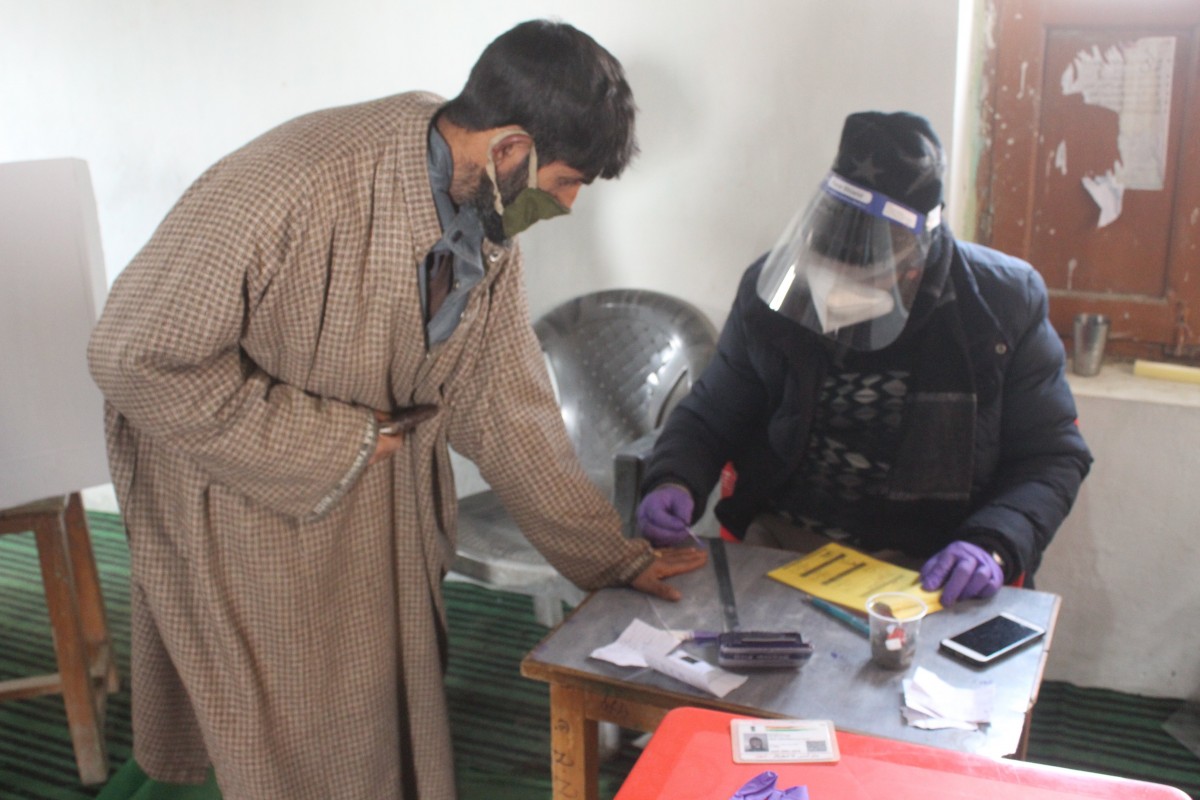 “The area has a unique identity across the Valley but despite former finance minister Abdul Rahim Rather being from the same constituency, we have not witnessed any development in the area,” Wani said.

Like many other villages and constituencies in J&K, where a lot of young and new faces entered the fray to contest the DDC elections with a common promise for development and better future, Wani too decided to put forth his candidacy.

Unlike a majority of the candidates who are fighting elections independently, Wani had joined the People’s Democratic Front (PDF) – a regional party led by a former legislator, Hakeem Mohammad Yaseen, who is from the same district.

Yaseen’s party has good support in his own constituency (Khan Sahib Budgam) where people have consistently voted for him as their representative for the last decade.

Wani feels that the fact that Yaseen commands the support of the people and has faith in the mainstream political system is key. His priority is to meet the people’s expectations.

From more than 2,400 eligible voters in Pakharpora village, around 550 cast their votes – which is a significant number in the village. The village Pakharpora is viewed as an area with a heavy presence of foreign militants and security forces. Militants have been particularly active in the area, which is located strategically in the district of Budgam, for it leads into South Kashmir as well as the city of Srinagar.

Apart from the 1990s, when Kashmir witnessed the first wave of militancy in the region, in the recent years, the village has seen Shakeel Ahmad Wani who was a government teacher until he joined the ranks of the militancy. Six months after he took up militancy, locals gathered at what was a large funeral.

Soon after his death, the people of the village rejected the brand of mainstream politics that was once visible in the area. Youngsters actively participated in stone-pelting incidents that took place around the area. Many of them have landed behind bars multiple times. 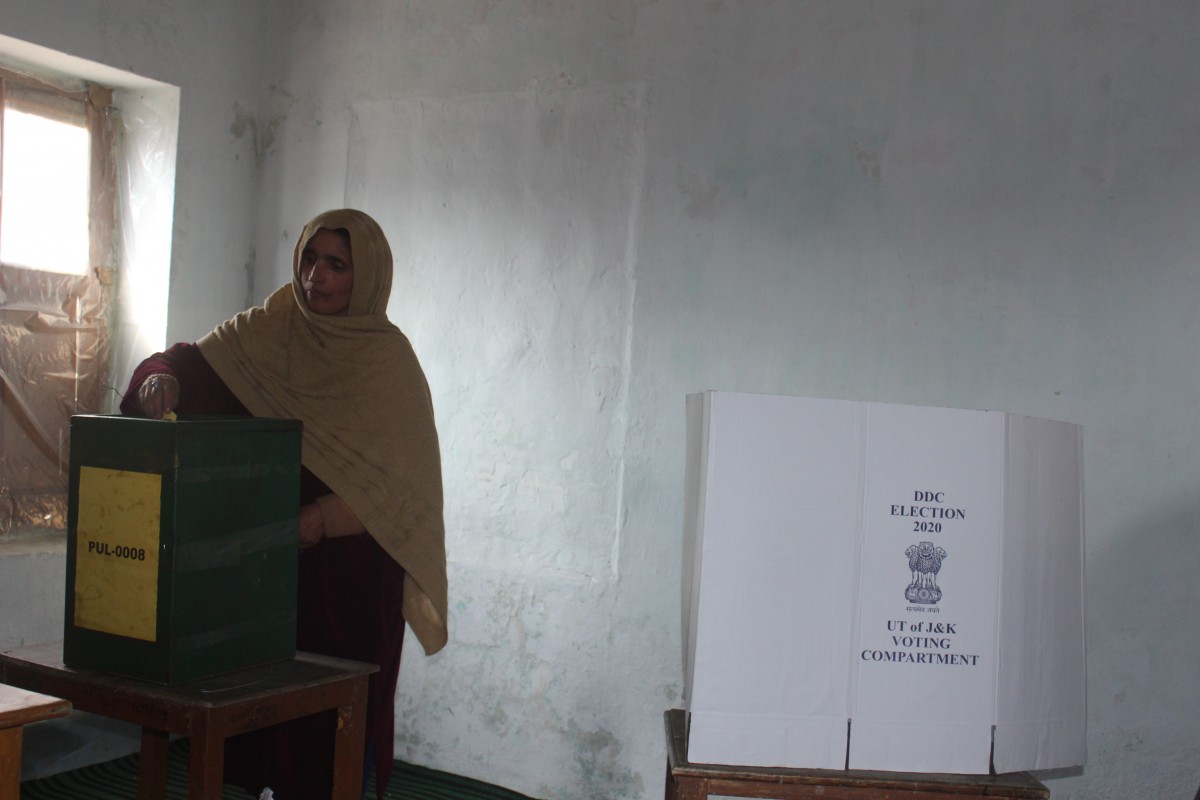 Contestant Wani was Shakeel’s next-door neighbour. However, Wani thinks local elections have nothing to do with the Kashmir conflict and are centred around development in the region.

“Not only in my area, but in general, very few people are in support of political movements. Their reason is valid because they have been betrayed and exploited in the past, but I believe, if their grievances and hardships’ would be addressed, there will be a positive change on the ground,” Wani told The Wire.

The polling booth located at the entrance of the village, surrounded by woods and a stream, flowing from a deep gorge on the front, was surrounded by Wani’s relatives and friends in the morning.

“We are hopeful that he will develop this area as our pleas have been discarded by all the government and authorities despite our major support since the last elections. This was a much-needed step to stand for our own rights,” said Basit Ahmad, a first-time voter from Pakharpora.

Other residents who spoke to The Wire also expressed sentiments similar to Ahmad’s. “We have been treated as second class citizens and this has kept us behind in every aspect. We want our candidate to voice our issues,” said a voter.

Addressing a press conference at Jammu, the SEC said that barring a few minor incidents of stone pelting at Anantnag, overall polling was peaceful.

“In Jammu, 66.67% voting was recorded. In Kashmir, barring Srinagar, DDC constituencies in other nine districts went to polling and recorded 33.57% voting,” Sharma said. A woman gets her finger inked at Budgam. Photo: Kaisar Andrabi

The lowest turnout in Jammu division was in the Jammu district which recorded 60.24% voting. Besides, the Kashmir Division recorded 33.57% average voter turnout with the Bandipora district recording the highest polling at 56.40% followed by Kupwara district at 52.35% and Budgam with around 45.65%.

Notably, around 95% of residents from South Kashmir’s Pulwama and residents from Shopian stayed away from the polling booths as the slogans of development no longer moved them to exercise their franchise. 21.89% polling was recored in Anantnag, 26.94% in Kulgam, 8.12% in Pulwama and 5.52% in Shopian.

Watch | In Kashmir, Some Are Casting Their Votes Hoping It Can Save Their Homes

In South Kashmir’s Anantnag district, three local journalists were allegedly beaten up by the police while reporting. The incident was widely condemned by regional political parties and the Kashmir Press Club.

Replying to queries about the incident, Sharma said that a minor incident had taken place when miscreants tried to disrupt the polling. “When media men reached there, miscreants started pelting with more pace, police separated scribes from the miscreants. An FIR has been registered under sections 103, 306, and 307 against miscreants,” he said.

He said that a complaint was also received by a political party in Rajouri and police have taken the cognisance of the incident. Sharma said that phase-6 of the DDC polls will be held on December 13 and all the preparations are in place for the smooth conduct of the remaining phases of polling.