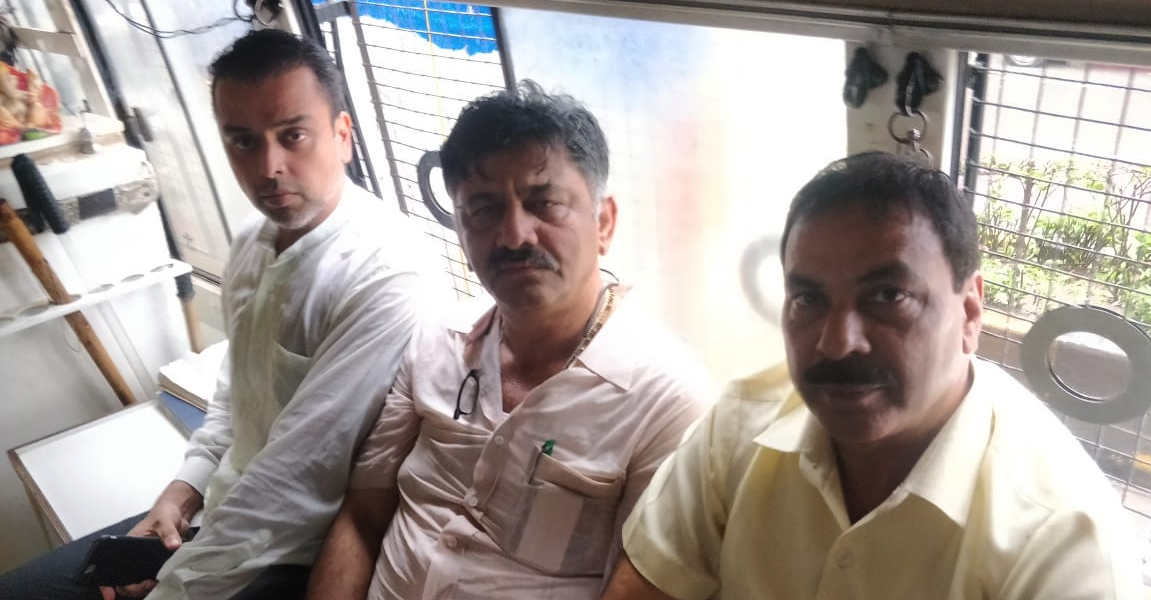 Milind Deora, D.K. Shivakumar and a Congress leader in a police van after their detention on Wednesday. Photo: Twitter/@milinddeora

New Delhi: To add to the distress of the coalition government of the Congress and Janata Dal (Secular) in Karnataka, two more Congress MLAs resigned on Wednesday afternoon. Karnataka assembly speaker K.R. Ramesh Kumar, however, has not accepted their or any of the other MLAs’ resignations yet, instead giving them time till July 17, when he will arrive at a decision.

Earlier in the day, Mumbai police detained Congress leader and Karnataka minister D.K. Shivakumar after stopping him from entering the Renaissance Mumbai Convention Centre Hotel, where rebel MLAs of the Congress and JD (S) are staying. Section 144, which prohibits assembly of more than four people, has been imposed in the area.

Shivakumar and other detained Congress MLAs, including Milind Deora, have been housed at the Kalina University rest house. Deora alleged in a tweet that their detention was an instance of ‘state-sponsored intimidation’ as the leaders had not engaged in any kind of stir. He was echoed by Karnataka chief minister H.D. Kumaraswamy, who tweeted that the police’s alleged manhandling revealed the Bharatiya Janata Party’s designs.

We are currently being detained by @MumbaiPolice in spite of zero provocation.

We did not protest, raise slogans or mobilise karyakartas.

This is a blatant example of state-sponsored intimidation pic.twitter.com/XJCIMB0HEJ

Manhandling Ministers and MLAs is very annoying and unbecoming of #MumbaiPolice. Such hasty Act by Maharashtra Government reinforces the suspicion on #BJP of #HorseTrading. This is a blackmark on the republic setup of our country.@CMOMaharashtra @narendramodi @Dev_Fadnavis

Meanwhile, in Bengaluru, Congress leaders, including Ghulam Nabi Azad, were detained for agitating near Raj Bhawan. The Congress and JD(S) had been protesting in Bengaluru — an occasion that doubled as an opportunity to show strength and unity between the coalition allies. JD(S) chief and former prime minister H.D. Deve Gowda was present along with Congress brass including Siddaramaiah and K.C. Venugopal, along with Azad.

Ten rebel MLAs had written to the Mumbai commissioner of police on Tuesday expressing fear that Shivakumar, along with Kumaraswamy, “were going to storm the hotel” in Mumbai’s Powai area.

The MLAs, who had resigned over the course of four days starting last Friday and set forth a chain of events which has once again made the position of Karnataka’s Congress-JD(S) coalition government precarious, also moved the Supreme Court on Wednesday, accusing Ramesh Kumar of deliberately delaying the acceptance of their resignations.

Ramesh Kumar had, on Tuesday, rejected the resignations of nine of the 14 coalition MLAs on the ground that they were not tendered in the correct format, Indian Express had reported. He had also scheduled interviews with the five MLAs whose resignations were in order, over the course of the next six days.

The apex court will hear the matter on Thursday, said counsel for the MLAs, Mukul Rohatgi.

The parliament, too, felt the heat of Karnataka’s ongoing political turmoil. Congress’s leader in the Lok Sabha Adhir Chowdhury spoke on Maharashtra Police’s alleged mistreatment of Shivakumar in Mumbai.

In the Rajya Sabha, Congress’s Rajeev Gowda, Dravida Munnetra Kazhagam’s Tiruchi Siva, Samajwadi Party’s Ravi Prakash Verma, Communist Party of India’s D. Raja and Communist Party of India (Marxist’s) T.K. Rangarajan gave notice under Rule 267 to discuss the issue of “defections being engineered to dislodge elected governments”. The uproar over the issue led to the adjournment of the Upper House until 3 pm.

At the heart of these blames of having orchestrated the coalition government’s troubles is Bharatiya Janata Party’s Karnataka chief B.S. Yeddyurappa, who sat in protest outside the Vidhana Soudha in Bengaluru on Wednesday morning. He also criticised Shivakumar’s symbolic tearing up of the MLA’s resignations and called, once again, for Kumaraswamy to resign as chief minister and “make way for a BJP government”. Yeddyurappa met both Karnataka governor Vajubhai Vala and speaker Ramesh Kumar on Wednesday.

The entire Congress leadership has been vocal in its criticism of the BJP leadership in the light of the latest chapter of ‘Operation Lotus‘. Karnataka Congress Legislature Party leader Siddaramaiah pointed fingers at BJP chief Amit Shah and Prime Minister Narendra Modi for trying to bring down the state government.

@BJP4Karnataka and @BJP4India are offering money, position & misusing central agencies to destabilise our govt. This is an attempt to gain backdoor entry to form unethical govt just as they did between 2008-13. Though they lack capability & eligibility, they are being selfish.

At around the same time when Yeddyurappa and his party leaders were at the sit-in, high drama was unfolding in Mumbai outside the hotel at Powai. Shivakumar, who is irrigation minister in Kumaraswamy’s cabinet, had left for Mumbai on Tuesday evening, ostensibly to convince the rebel MLAs to return to the fold. He had even booked a room for himself at the hotel. The booking, ANI reported, was cancelled by hotel authorities, who cited “some emergency”.

Barred from entering the building, Shivakumar settled outside it with a cup of beverage in hand and spoke to reporters on the injustice of the cancellation. “They should be proud of a customer like me. I love Mumbai. I love this hotel. Let them cancel. I have other rooms also,” he said.

He then notched the rhetoric up a peg and said that he had no plans to leave without “meeting his friends”.

Karnataka Minister DK Shivakumar outside Renaissance Mumbai Convention Centre Hotel: Nothing is permanent in politics. There’re no friends&no enemies.Anyone can turn at any moment.I’m trying to contact them(rebel MLAs).I’ll get a call.Their heart is beating to meet their friend. pic.twitter.com/2cdXiSn4dk

“They’ll call me. Their heart will break. I am in touch already. All of our hearts are beating,” he said.

The hotel-bound MLAs were having none of it. A steady stream of back and forth emerged between Shivakumar on the outside and the MLAs inside, thanks to the active role played by mediapersons in relaying accounts live.

Yeshwanthpur MLA and Congress leader-turned-dissident S.T. Somashekar said while the intention was not to hurt Shivakumar, they would absolutely not be meeting him on Wednesday. “We have faith in him but there is a reason we have taken this step. Friendship, love and affection are on one side. With and gratitude and respect we request him to understand why we can’t meet him,” he said.

Karnataka’s municipal administration minister and Congress rebel Ramesh Jarkiholi echoed Rayareddy. He also added that no one from BJP had come to meet them either.

Meanwhile, from his station outside the hotel, Shivakumar also found the opportunity to observe that “nothing is permanent in politics” and that there are no friends or enemies in the field.

Also read: The Odds Are Stacked Against H.D. Kumaraswamy in Karnataka

Shivakumar, along with Kumaraswamy, have been trying their best to reinforce the idea that the coalition government is not, after all, on the brink of collapse. While the former retweeted photographs from a routine government meeting on irrigation featuring JD(S) and Congress ministers, the chief minister has stoically maintained that there is no trouble.

Yet, reports have said that the JD(S) and Congress leaders still in the fold have allegedly been quarantined by both parties. ANI has tweeted visuals of JD(S) leaders housed at a Bengaluru resort practicing yoga and eating at a village.

On Monday, in an effort to make it possible for a reshuffle that could accommodate all the rebel MLAs in the Karnataka cabinet, all JD(S) and Congress ministers in the state had tendered their resignations after a day of fervent meetings.

This article will be updated with the latest developments as the situation unfolds in Karnataka and Maharashtra.