Karnataka Polls: Who Stands Where in the Mosaic of Caste, Local Dynamics

In the past, all six regions in the Southern state have shown stark differences in voting patterns and that trend is likely to continue in 2018 as well.

The BJP sees Tipu Sultan as a "religious bigot" and a "brutal killer". Credit : Wikimedia Commons

The centre of political action has shifted to the South of the Vindhyas with the stakes high for both the Congress and the Bharatiya Janata Party (BJP) in the Karnataka assembly elections scheduled to be held on May 12, across the 224 constituencies. Little wonder that the high-voltage Karnataka elections are largely being seen as the ‘first semi-final’ ahead of the ultimate showdown in 2019 when the Lok Sabha polls are due.

A favourable verdict is extremely important for all three key stakeholders – the Congress, the BJP and the Janata Dal (Secular). The Congress will try to find its lost mojo back, the BJP will be hoping for the ‘Modi Magic’ to work, while H.D Deve Gowda’s JD(S) will try to stay relevant in the politics of the state by emerging as the kingmaker, going with the highest bidder after the elections.

Karnataka is a tough state to predict. This is because the Southern state, unlike any other Indian states, does not vote in a uniform way. Politically, the state is divided into six regions – coastal Karnataka, Bombay Karnataka, Hyderabad Karnataka, Central Karnataka, Bengaluru and Old Mysore.
Each of these six regions has its own history, political dynamics, caste equations, socio-cultural characteristics, influential leaders and local issues. In the past, these regions have shown stark differences in voting patterns and that trend is likely to continue in 2018 as well. For instance, incumbent chief minister Siddaramaiah’s anti-Hindi and pro-Kannada pitch maybe an issue of significance in the urban areas of Bengaluru but may have almost no impact in the coastal region where Hindutva may be the deciding factor.

Coastal Karnataka, also known as Karvali, is picturesque. Lush green paddy fields, dotted with coconut and arecanut trees complement the Arabian Sea running along its coast. It could have been an ideal, calm place to live in but in the recent years the region has become a communal tinderbox. A small fight can easily snowball into an all out communal riot. There are villages where Hindus are not allowed to sell land to Muslims and vice-versa. Communal clashes in the region date back to the 1990s, when riots broke out after the Babri Masjid’s demolition in Ayodhya. Since then, the region has been a political lab for carrying out Hindutva experiments.

Coastal Karnataka is the BJP’s bastion and Hindutva will continue to be the deciding factor in the assembly polls. In this region, the Congress and the BJP are in a direct contest. In the 2013 polls, the Congress swept the region winning 13 of the 19 seats. This time round, the BJP has raised issues like the murder of 24 RSS-BJP workers, beef ban, ‘minority appeasement’ by the Congress-led state government and the celebration of Tipu Jayanti. The Congress on the other side is banking on the 25% minority votes and the popularity of its local leaders.

In 2013, the Bombay Karnataka region was one of the most important reasons behind the Congress storming to power as it swept 31 of the 50 seats. The region, which includes the districts of Belgavi, Hubbali-Dharwad, Bagalkote, Vijaypura and Gadag, is seeing a bipolar fight between the Congress and the BJP. The Lingayat issue, the Mahadayi water dispute, sugarcane prices, drought and farmer suicides will be the talking points in this region. Dominated by the Lingayats, the Bombay Karnataka region is a traditional BJP stronghold. In the previous assembly elections, there was a three-way split in the BJP’s Lingayat vote. One section remained with the BJP, another was captured by the Karnataka Janata Paksha of B.S. Yeddyurappa and a third went to the Congress. This time round, with the Lingayat strongman Yeddyurappa back in the party, the BJP is hopeful of consolidating the Lingayat vote and emerging as the biggest party in the region. However, Siddaramaiah’s move to recommend a new religion tag for the Lingayats is being seen as an attempt by the Congress to split the Lingayat vote, like in 2013. Former chief minister Yeddyurappa’s personal popularity and the dominance of Lingayats is also seen as giving an edge to BJP in the region.

The Mahadayi water dispute between Karnataka and Goa is another major issue here. Last year, the Karnataka BJP, led by Yeddyurappa, tried to broker a water sharing deal with the BJP government of Goa. The party hoped that even a small breakthrough would help it make major electoral gains in the Bombay-Karnataka region. However, BJP’s allies in Goa refused to accept any such move and, to make matters worse, the irrigation minister of Goa, Vinod Palyekar, even referred to Kannadigas as ‘harami’ (a four-letter word) causing a major embarrassment for Yeddyurappa. The Congress is now using this incident to channelise anger against the BJP and Yeddyurappa.

The Hyderabad-Karnataka region, which was a part of the Nizam’s erstwhile Hyderabad state, is one of the most underdeveloped regions of Karnataka. The districts of Ballari, Yadgir, Koppal, Raichur and Kalburgi account for 40 seats. The demographics of the region are quite interesting. Muslims, Schedule Castes and Schedule Tribes are numerically significant. A considerable vote of the Lingayats is also present here.
The region has been a Congress bastion, except in 2008 when the BJP emerged victorious riding on the rising influence of the Reddy brothers. With the return of the Reddy brothers in the BJP, the BJP seems confident of winning majority of the seats in the region. It seems to be a case of ‘Reddy, Steady and Go’ for the BJP as Gali Janardhana Reddy has been able to get seven tickets for his family members and close aides. According to press reports, the mining scam tainted, G. Janardhana Reddy, who has been barred from entering Ballari by the Supreme Court, has set up base at a farmhouse near Chitradurga to monitor the BJP’s campaign in the region.
The Congress is hoping to put up a strong show banking on the development works in the region, its decision to grant special status to region under Article 371(J) and the influence of senior leader Mallikarjun Kharge among the SC, ST and Dalit voters in the region.

The land of the influential mutts and seers and the home turf of BJP’s chief ministerial candidate B. S Yeddyurappa, Central Karnataka includes the four districts of Shivamoga, Chitradurga, Davangere and Chikkamagluru. There is a three-cornered race between the Congress, the BJP and the JD(S),  all of which have their own pockets of influence in the region. In the 2013 elections, the BJP performed miserably because of the split in the party and Yeddyurappa forming the Karnataka Janata Paksha. With Yeddyurappa back in the BJP, the saffron party will be hoping to perform strongly on his home turf.

In Shivamoga, it’s a battle between two seasoned politicians of the Congress and the BJP. While Yeddyurappa is the BJP’s biggest face in the region, the BJP is suffering from infighting and factionalism in the Central Karnataka belt. The 87 year old Shamanur Shivashankarappa is the Congress’s tallest leader in the region. While there was some speculation that he may defect to the BJP, he is contesting the polls from Davangere South constituency.

In a state where caste combinations and equations influence and dominate the politics and poll outcomes, Bengaluru is the odd one out. Civic issues, infrastructure, development, party affiliations, candidates influence the voter in Bengaluru more than anything else. Urban areas have always been the BJP’s strength throughout the country and even in Bengaluru, the BJP has traditionally enjoyed the upper hand.

The incumbent Congress is battling heavy anti-incumbency in the region. Civic apathy, potholes, burning lakes, the steel bridge controversy and the crumbling infrastructure has provided enough ammunition for the opposition BJP and JD(S) to attack the Congress. Prime Minister Narendra Modi’s campaign may have the maximum impact in this urban region. The Congress seems to be targeting the urban poor with popular schemes like the ‘Indira Canteens’. Siddaramaiah’s pro-Kannada rhetoric, pitch for a separate state flag and removal of Hindi sign boards from metro stations may help the Congress. There are about 10 lakh Telugu voters in Bengaluru region and after Andhra Pradesh’s  Special Category Status row with the BJP at the Centre, it will be interesting to see how they vote. 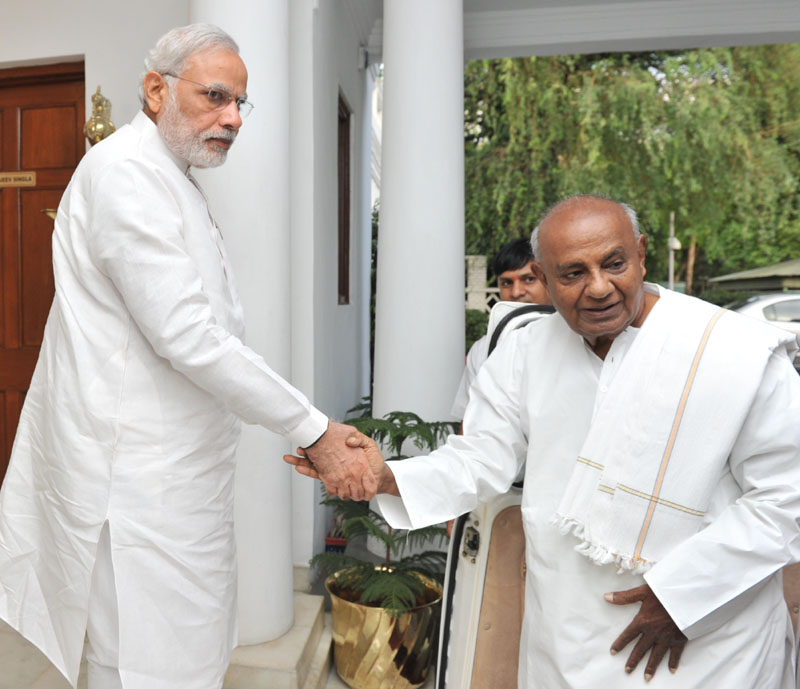 The highlight of the Karnataka elections so far has been that almost all opinion polls have predicted a hung assembly. It will be the Old Mysore region which will decide, whether there will be a hung assembly or whether any party is able to get a clear majority. The region consists of the districts of Mandya, Mysuru, Chikkabalapur, Chamrajnagar, Ramanagarm, Hassan, Kolar, Tumkuru, Kodagu and Bengaluru rural districts.

As one reaches the Old Mysuru region, an old rivalry between Siddaramaiah and his mentor H.D Deve Gowda gets reignited. The BJP has little presence in the region and the fight here is largely between the Congress and the JD(S). While Siddaramaiah banks on his AHINDA (Alpasankhyataru (Minorities), Hindulidavaru (Backward Classes) and Dalitaru (Dalits) vote bank, the JD(S) relies heavily on the dominant Vokkaliga community for its success.

Mandya has emerged as the hotbed of Cauvery river politics and the issue will be a major factor in the assembly polls. The BJP, which has largely been seen as a ‘Lingayat’ party has failed to win the support of the Vokkaliga community. But with former Congressman S.M. Krishna joining the BJP, the party is trying to win the Vokkaliga votes and make inroads into the Old Mysore region.

Congress president Rahul Gandhi set the cat among the pigeons when he described the JD(S) as a B-team of the BJP. The statement was actually an attempt to prevent the JD(S) from getting the anti-BJP minority and Vokkaliga votes in the region. The Congress realises that if the JD(S) wins majority of the seats in the region, it will emerge as the kingmaker and the JD(S)-BJP may come together to keep the party out of power.
The JD(S) will try hard to win at least 25-30 seats in the region, which will help it to emerge as the kingmaker after the elections.

Omkar Poojari is a student of politics and economics at St. Xavier’s College, Mumbai. He recently travelled through different parts of Karnataka to follow the assembly election campaign closely.