Karnataka: Numbers Beyond Him, Yeddyurappa Resigns as CM Before Floor Test

The house has now been adjourned indefinitely. 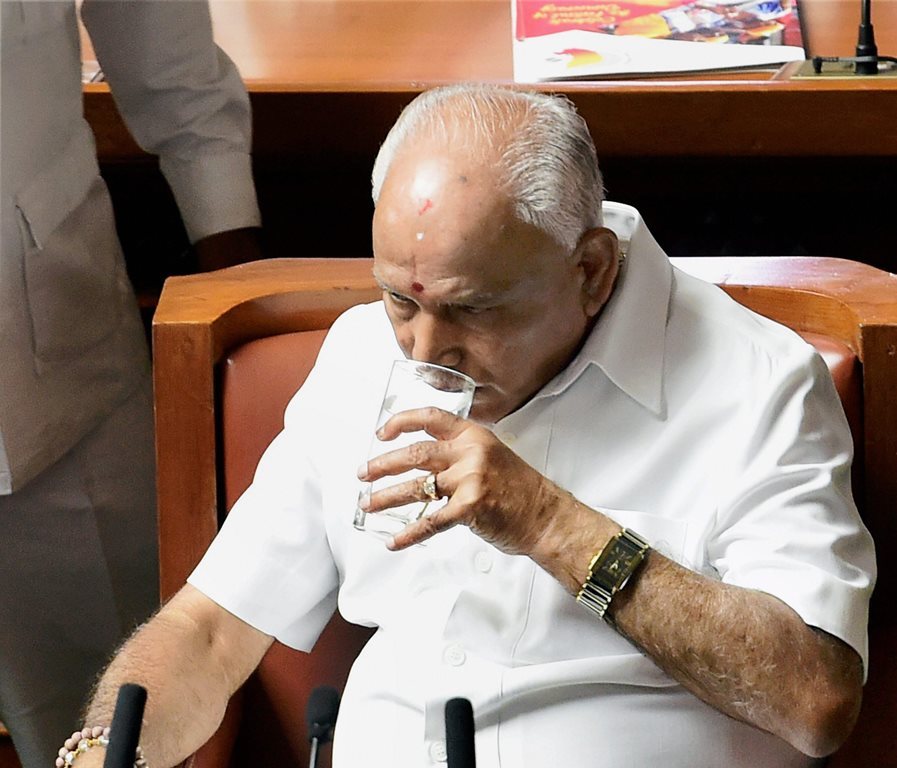 B.S. Yeddyurappa in the Karnataka assembly on Saturday. Credit: PTI

New Delhi: With the BJP having failed to induce the support of the requisite number of legislators from the Congress or Janata Dal (Secular), Karnataka chief minister B.S. Yeddyurappa chose not to subject himself to a floor test in the Karnataka assembly and instead announced his resignation.

Though Yeddyurappa moved the motion seeking the confidence of the house when the special session of the assembly started at 4 pm today, his remarks made it clear that he had been unable to split the opposition. “I had hoped they would have voted for us on the basis of their conscience but this was not to be … I am resigning as chief minister and going immediately to Raj Bhavan to inform the governor of my decision”, he said at the end and then promptly walked out of the Vidhan Soudha.

What Yeddyurappa said was an appeal to conscience has been described by the opposition as appeals based on bribery. The Congress and JD(S) have released multiple audio recordings made by their MLAs in which offers of money and ministerial berths are made to them, allegedly by Yeddyurappa himself, his son and G. Janardhan Reddy, the mining baron from Bellary. The BJP has dismissed these recordings as “fake” but their veracity would likely become the subject of police investigation once the JD(S)-led government which is likely to now be sworn in takes charge.

In his brief speech to the assembly before resigning, Yeddyurappa said he was facing an agni pariksha – a trial by fire. “If we had received 113 seats instead of 104, we would have made this state a paradise,” he said. “People have blessed us with 104 seats. The mandate wasn’t for Congress or JD(S) yet they formed an alliance to form the government. I condemn the backdoor politics done by Congress and JD(S).”

“My only aim in forming the government in Karnataka was to help the poor and farmers and waive off their loans. All that Congress has done is try to divide the society on the basis of caste and religion. I wanted to serve the people of Karnataka,” he added.

The house has now been adjourned indefinitely.

Several Congress and JD(S) leaders had said that Yeddyurappa was likely to resign before the floor test. They have been proved right.

The Karnataka assembly was in session for about 20 minutes, and a floor test was supposed to be held in which the minority BJP government, headed by B.S. Yeddyurappa, was to prove its majority.

Saturday’s denouement is likely to place a large question mark over the role of governor Vajubhai Vala, who insisted on inviting Yeddyurappa to form the government despite the BJP falling short of a majority by eight MLAs and the JD(S)-Congress combine staking claim with 117 MLAs on its side.