Morality, Unambiguity and the Curious Case of India's Governors

Karnataka's fractured mandate ensured that former BJP MLA and Karnataka's governor Vajubhai Vala was pushed into the spotlight. By law, the governor is bound to invite H.D. Kumaraswamy to form the government, so which way will he tilt? 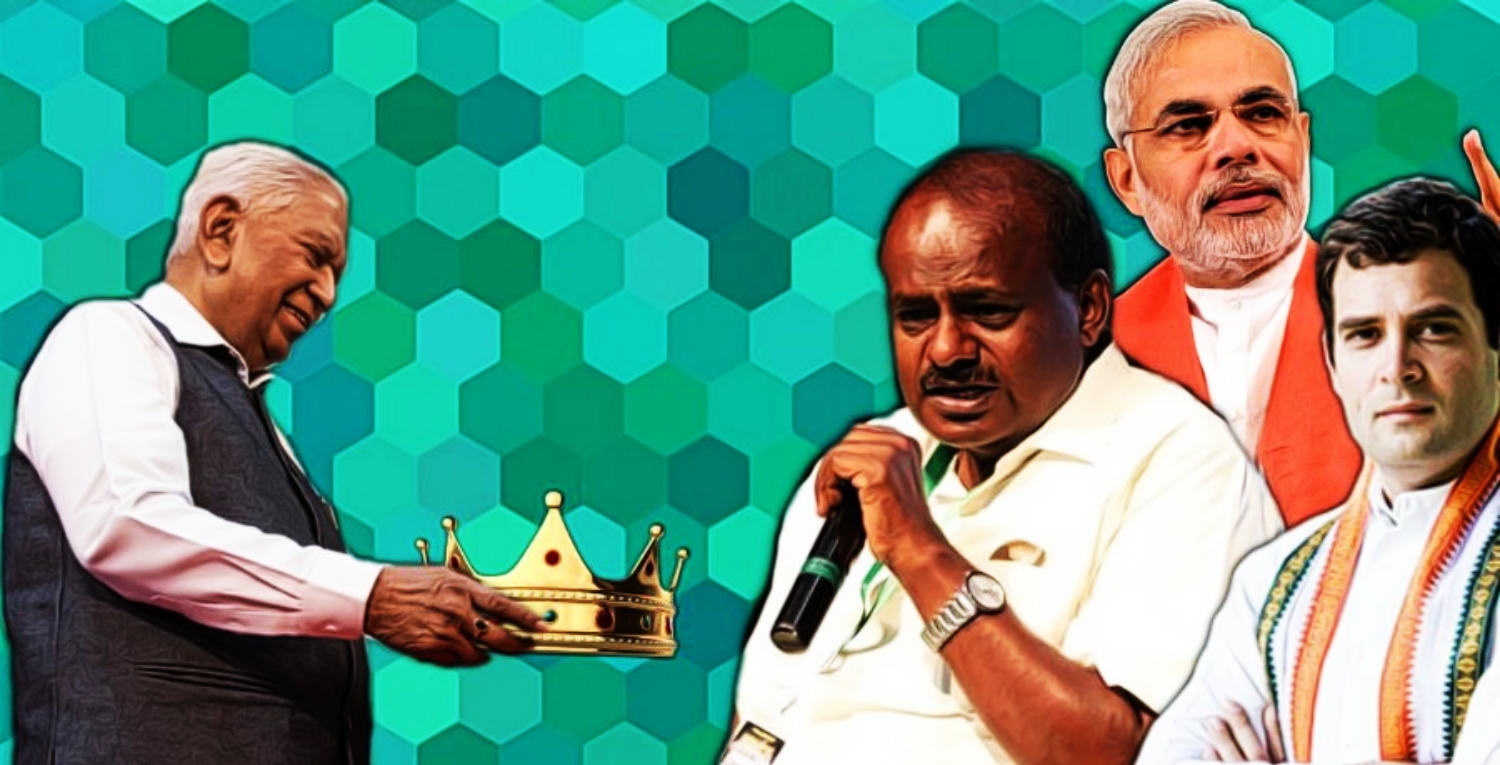 It is simply stupid to lament about the falling standards of morality in the domain of politics in these bad times. Not because morality, in the true sense, is not free from values such as class and other socio-economic factors; it is stupid to raise concerns about falling moral standards because it is best to deal with the domain of politics from stated legal principles, which indeed are available to us, etched in stone and hence need not suffer the subjectivities of interpretation.

Let me deal with the issues thrown up by the Karnataka state assembly elections, held on May 12, where the results were declared on May 15. As the counting process, now rendered faster thanks to the silicon technology facilitated electronic revolution – the electronic voting machines (EVMs) – we also found an abuse of this by journalists, particularly those ill-equipped in handling big data science (but arrogant enough to claim they knew all) ‘projecting’ the final tally just a couple of hours after the machines were unlocked for counting. And the anchors ended up declaring the winner, giving the BJP 120 MLAs and even labelling Rahul Gandhi a failed leader even before it was lunch time.

Their lack of skills in big data science was revealed sooner than their ‘shows’ lined up for the evening. And rather than conceding their lack of skills, journalists began extolling morality and even declared the Congress-Janata Dal(S) post-poll combination unethical. If there was any concern for ethics in public life – and I consider journalism as a calling as part of public life – they ought to have expressed regret for having called it wrong and given 120 seats to the BJP in Karnataka.

Well. Lest being accused of contradicting oneself, let me desist from calling the TV people names from an ethical or moral premise.

Unfortunately, many of those who called it wrong from the studios happen to be the big bosses of the enterprise and hence not vulnerable to be sacked for calling it wrong. And their subordinates, just to keep their jobs, were let loose by the bosses who anchor shows to make up stories of how the goings on were perceived as amoral and unethical; some have even got on with reporting on ‘missing’ lawmakers.

The domain of ministry making and inviting anyone from among the lot of claimants for the chief minister’s job, left with the governor of the state, indeed is not caught in binds of morality and ethics. Instead, constitutional law is unambiguous on the parameters. It must be added that such clarity in the law came out from the Supreme Court on two distinct occasions (in 1994 and 2006). It is also important to add that the higher judiciary went about clarifying the position after it found lofty ideals prescribed by the Justice Sarkaria Commission on moral, ethical and good behaviour were flouted with impunity by our political class across the spectrum.

Take for instance what the Sarkaria Commission had to say about who shall be made the governor of a state and vested with powers including deciding on claims to government formation:

‘The Governor should be eminent in some walk of life and from outside the state. He should be a detached figure without intense political links or should not have taken part in politics in recent past. Besides, he should not be a member of the ruling party.’

The incumbent governor of Karnataka, Vajubhai Vala, ought not to have been there in the first place. Not only was he a member of the ruling BJP in the recent past; he is also there because he had vacated his assembly seat for Narendra Modi to contest elections after he had become chief minister of Gujarat.

Modi, it may be recalled, replaced his own party’s Keshubhai Patel on October 7, 2001. Patel’s chief ministerial career ended after dissidents in the BJP sought his removal. Modi was not an MLA then and Vala vacated his own seat, leading to a by-election. Since then, it is not as if Vala has faded away. He remained a minister, became the speaker of the Gujarat assembly in December 2012 and was sent to Bengaluru in September 2014. All the while, he was an active player in the BJP.

Contrast this with the Sarkaria Commission’s ideal on what should make a governor.

Vala, however, is not the only one of this kind and the BJP is not the only sinner. The gubernatorial office had turned a sinecure for political players either when they grew old or whenever they were found creating problems for their party colleagues in the state unit. Raj Bhawans across the country have got only persons who were in party politics all through and until recently. It was, hence, that the apex court stepped in to put things in order.

For instance, a nine-member constitution bench of the Supreme Court in the Bommai case (interestingly involving the Congress, the BJP and the Janata Dal and Karnataka as well as some role reversals) got the court to address, even without reference, on the rule to be followed by the governor while inviting the prospective chief minister to be sworn in. This, incidentally, came up in the course of ruling on the centrality of the floor test as against the governor’s discretion when the majority support for an incumbent government was questioned.

The apex court, after stressing that the governor shall not exercise his judgment in determining the support to a chief minister in power and shall promptly ask that to be established on the floor of the House, hastened to add that the mandatory nature of a floor test it spoke about applied to an incumbent government losing its support among the legislators and not to contexts where the formation of a government after elections throwing a fractured mandate.

In paragraph 396 of the judgment, authored by Justice Kuldip Singh for the bench, the apex court held:

‘We make it clear that what we have said above is confined to a situation where the incumbent Chief Minister is alleged to have lost the majority support or the confidence of the House. It is not relevant to a situation arising after a general election where the Governor has to invite the leader of the party commanding majority in the House or the single largest party/group to form the Government. We need express no opinion regarding such a situation.’

It just so happened that Raj Bhawans continued to be occupied by persons with political masters and the Supreme Court was called to intervene, once again, in 2006. The petitioner, this time, was Nitish Kumar, an ally of the BJP then and now (although he had a brief interlude when he joined hands with Lalu Yadav on the grounds of secularism) against the decision of the then Bihar governor Buta Singh (who too had moved from one party to another but ended up in the Congress, where he had began) to recommend the dissolution of the state assembly even before a government was formed in the state.

Expounding in detail on the exercise of discretionary powers vested in the governor, a task that the apex court left without elaboration in the Bommai judgment, the majority judgment of the five-judge bench in the Rameshwar Prasad vs Union of India case, was unambiguous on whatever was the governor’s job in the aftermath of an election and where the mandate was fractured. In doing this, Justice Y.K.Sabharwal, then the Chief Justice, also speaking for two others in the bench endorsed what the Sarkaria Commission said on this and thus lent to it the status of law. The apex court held:

“It is clear that the leader of the party which has an absolute majority in the Legislative Assembly should invariably be called upon by the Governor to form a Government. However, if there is a fractured mandate, then the Commission recommends an elaborate step-by-step approach and has further emphasised that “the Governor, while going through the process of selection as described, should select a leader who, in his (Governor’s) judgement, is most likely to command a majority in the Assembly. The Governor’s subjective judgement will play an important role.”

Upon being faced by several contesting claims, the Commission suggests that the most prudent measure on part of the Governor would be to test the claims on the floor of the House. Despite best efforts, if ultimately a viable ministry fails to emerge, a governor is faced with two alternatives – he may either dissolve the assembly or recommend President’s rule under Article 356, leaving it to the Union government to decide the question of dissolution. The Commission expressed its firm view that the proper course would be “to allow the people of the State to settle matters themselves”.

The apex court went on further in this regard to specifically address the situation that is now before Vajubhai Vala in Bengaluru. It said:

– An alliance of parties that was formed prior to the Elections.

– The largest single party staking a claim to form the Government with the support of others, including “independents”.

– A post-electoral coalition of parties, with all the partners in the coalition joining the Government.

– A post-electoral alliance of parties, with some of the parties in the alliance forming a Government and the remaining parties, including “independents” supporting the Government from outside.

It is clear that while options one and two do not present before us in Karnataka, option three is very much there and the governor, by law, is bound to follow that and invite H.D. Kumaraswamy to form his government in the state. Vala may recall that Buta Singh, who as governor did not follow this – it was only a precept from the Sarkaria Commission at that time and not the law laid down as it is now – was compelled to quit as Governor on moral grounds (for whatever it meant to him and others) then.

In other words, the law of the land holds that the post-poll coalition struck by the Congress and the Janata Dal (S) along with two other MLAs prima facie commands the support of majority in the Karnataka assembly; and the Governor’s job is to ensure that Kumaraswamy proves this on the floor as early as it can be. The Governor can insist that it be done in a couple of days too.

Meanwhile, it is relevant to cite an observation that Justice Arijit Pasayat made, concurring with Justice Sabharwal in the Ramshwar Singh case. And I quote:

It has become imperative and necessary that right persons are chosen as Governors if the sanctity of the post as the Head of the Executive of a State is to be maintained.

It is true that the Congress party initiated the business of turning Raj Bhawans into spaces where its elderly or troublesome leaders could be sent to. But that does not make such appointments as that of Vajubhai Vala justified. It is time that our TV anchors learn to raise such constitutional questions and restore the principles rather than attempting lessons of morality and ethics. Let the law govern us first; morals and ethics will soon come into place.