A Non-Marxist’s Gratitude for Karl Marx

Even when differences prevail, it is difficult to escape Marx and all his ideas. 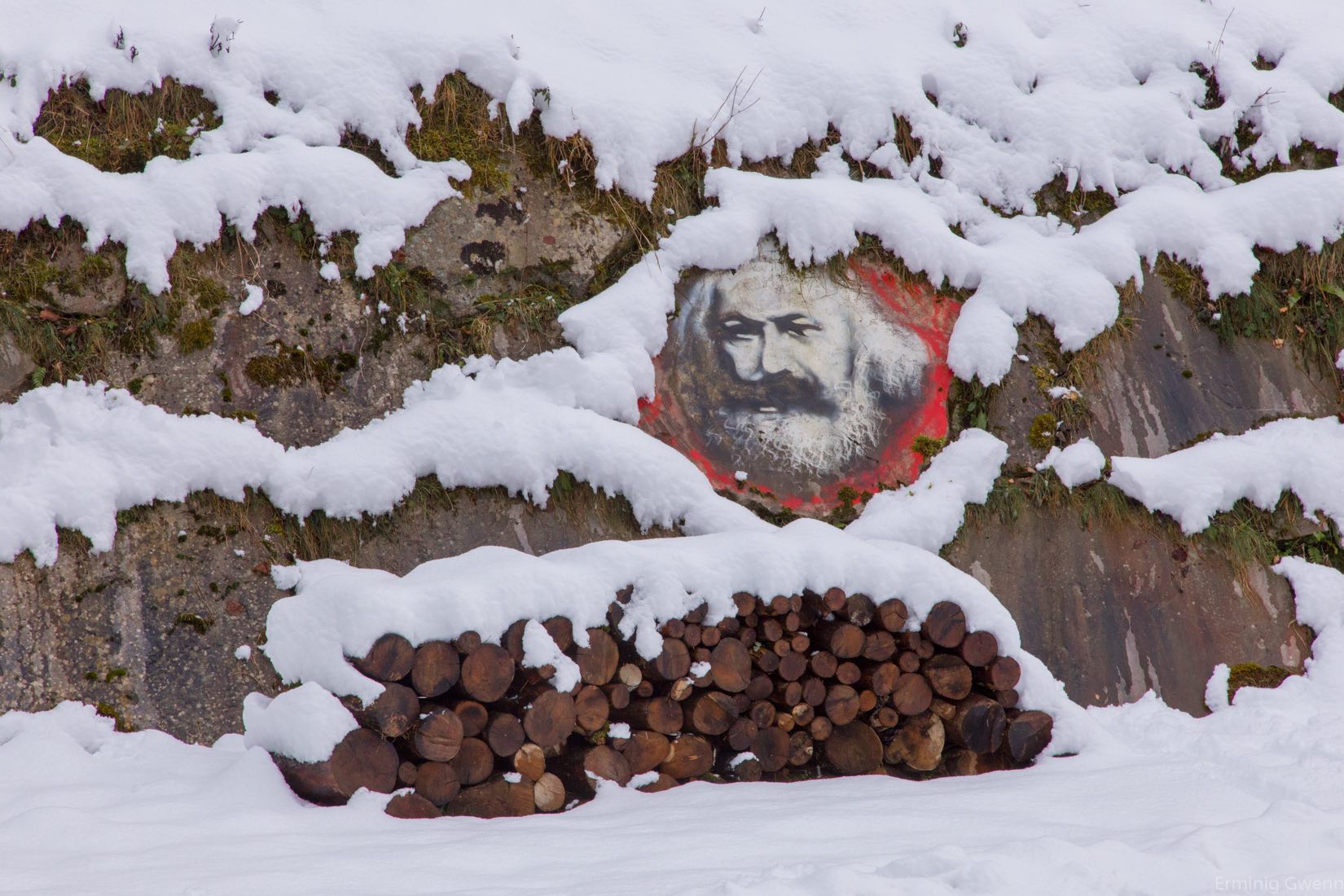 Marx was possibly the founder of the most appealing secular religion in modern times. Credit: Etienne Valois/Flickr CC BY-NC-ND 2.0

On Karl Marx’s birth anniversary I hear a call from within; I feel like invoking him and paying homage to the prophet of modern times. If by being a Marxist one means following a set of strict guidelines – unconditional acceptance of the postulates of historical materialism or the inexorable laws of history leading to the maturation of class conflict and resultant social transformation; or becoming an activist comrade in a leftist political group and negating all other visions of socialism as ‘utopian’ – I am not a Marxist. And yet, the oceanic currents in his thinking continue to fascinate students and wanderers like me.

A political economist revealing the ‘mysterious’ character that commodities acquire in the process of market-mediated exchange; a political theorist exploring the formation of classes, the social character of the state and the dynamics of power in a conflict-ridden society; and an existential philosopher negotiating with Georg Wilhelm Friedrich Hegel and Ludwig Feuerbach, and reflecting on the loss of man’s ‘species character’ in an alienated work sphere – Marx seems to be all-pervading. And that is why I dare to recall him even in our times characterised by the fall of the Berlin Wall, the collapse of the Soviet Union and the assertion of neoliberal global capitalism.

The gift of Marx

To begin with, I wish to refer to a set of four insights from Marxian thinking which, I believe, have altered our ways of seeing the world in a significant way – even Marx’s opponents cannot escape this influence. First, it is absolutely important to remember his profound moral/spiritual critique of capitalism. No, I do not wish to negate its importance by saying that it was merely the romanticism of ‘young’ Marx. Instead, I see the limits to ‘epistemological break’ and find an extraordinary affinity between ‘Hegelian’ Marx’s reflections on alienation, estranged labour, the ability of money to alter everything into its opposite and the death of all ‘heavenly ecstasies’ in the ‘icy water of egotistical calculation’ in his Economic and Philosophical Manuscripts and Communist Manifesto, and what the ‘mature’ Marx described in Capital as ‘commodity fetishism’ – the way human relations get transformed into relations between objects and commodities. What else do you see in the IPL – a mix of global capitalism, corporate media and cricket spectacles?

In fact, capitalism transforms us into commodities and destroys us – our human potential, our creativity and relationships. And this led Marx to give us a noble (yet feasible) dream – an aspiration for communism: ‘the true resolution of the strife between existence and essence, objectification and self-confirmation, freedom and necessity’, love generating love, and a ‘whole man’ cultivating all the faculties of being. We should not lose sight of this fact in the name of merely theorising labour time, surplus value and profit, even though, as a look at A Contribution to the Critique of Political Economy would suggest, it has its importance.

Second, he opened our eyes, equipped us with the spirit of critical consciousness – the ability to see how our ideas are related to our social location, our engagement with the forces and relations of production and how the ideology of the ruling class (those who control the production relations) often projects itself as the dominant common sense, an indisputable truth. And we need to overcome the trap of this ideological illusion – or ‘false consciousness’ – to see how society actually functions: say, the way the idea of ‘fair competition’ conceals the reality that in a class divided society, because of the asymmetrical distribution of wealth and power, there is actually no equal race. This is like redefining the state. Beneath its apparent neutrality lies its essential interest to retain the status quo through its coercive as well as ideological apparatus. In a way, it was Marx’s gift – the ability to see beyond the doctrine of ‘official’ truth.

Third, Marx enabled us to see a new meaning in conflict. Conflict is not just an aberration, a ‘law and order’ problem. Conflict is not necessarily negative. Instead, conflict is rooted in the process of social formation itself. The conflicting class interests, as his sharpened dialectical logic suggests, become the driving force in the progressive movement of history. In fact, it is through this methodology – the continual dialectical interplay of thesis and anti-thesis – that we see a pattern in history. We understand, say, how the new modes of production led to the rise of the aspiring industrial/ bourgeois class that eventually caused the demolition of feudalism, how the growth of the nationalist bourgeoisie in colonial India generated a pan-Indian freedom struggle, or how the vicious circle of ‘Maoist upsurge and fake encounters’ is inseparable from an economic model that displaces, humiliates and marginalises the local inhabitants in the hinterland of Chhattisgarh and Jharkhand. 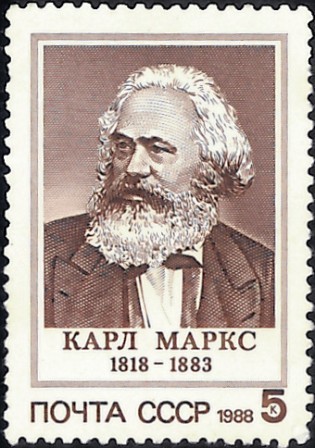 A stamp with Karl Marx on it from the Soviet Union. Credit: Wikimedia Commons

And finally, Marx helped us to see the possibilities and boundaries of human agency. In the material world our freedom is not absolute because we are historically located actors governed by the constraints of socio-economic structure. Ideas, morality and religion, Marx said in The German Ideology, do not have the resemblance of autonomy because what individuals are “coincides with their production, both with what they produce and how they produce”. Yet, we should not forget that Marx’s materialism was not like the mechanistic materialism of Feuerbach. Between consciousness and reality lies praxis, and it is through praxis that as collective subjects we regain our agency and, far from being passive spectators of history, take part in historic transformation. Marx was not a detached observer formulating the ‘iron’ laws of history; instead, he was a passionate, reflexive thinker making us aware of our historic responsibility. The 11th thesis on Feuerbach makes this point abundantly clear: “The philosophers have interpreted the world in many ways. The point, however, is to change it.”

No wonder that with such magical thinking Marx could inspire people from every walk of life – artists, political activists, academics, philosophers. Even when differences prevail, it would be difficult to escape him. For instance, even though a sociologist like Max Weber came forward with a more nuanced reading of social stratification through the categories of ‘class’, ‘status’ and ‘power’ or pleaded for the role of ideas (or Calvinism) in the making of capitalism, the ‘ghost of Marx’ would continue to haunt him. Likewise, while an Indian Marxist, because of the growing force of Ambedkarism, acknowledges the relative autonomy of caste, he does not forget to see its economic base in, say, landholding patterns in a semi-feudal economy. Or for that matter, Jean Paul Sartre’s existentialism was not altogether indifferent to the conscience of Marxism. In fact, Sartre’s anguish over ‘bad faith’ was not fundamentally different from Marx’s reflection on the agony of alienated man. And Michel Foucault, despite his critique of the Marxian grand theory of power, retained the same critical spirit in depicting the dynamics of “micro physics of power” through the technologies of surveillance and discipline.

However, there are dangers – economic determinism and the violence of authoritarianism – that we cannot afford to forget. Luckily, creative, non-orthodox Marxists have come forward and regenerated its emancipatory spirit in the context of the changing times. Take, for instance, the possibility of Marxism being degenerated into a reductionist, deterministic, positivistic doctrine. Thank Antonio Gramsci; he evolved a powerful critique of this sort of ‘vulgar evolutionism’ and ‘positivism’ that he saw in Nikolai Bukharin and Georgi Plekhanov. The influence of the idealist philosopher Benedetto Croce and his immense sensitivity to the domain of culture and human possibilities led him to nurture a ‘philosophy of praxis’. There is no mechanistic or deterministic rule that makes history move. As politics is the realm of creative action, one can “foresee,” said Gramsci, “to the extent one acts”. With Gramsci we realised the need for reconciling the “feeling of the popular element” and the “thinking of the intellectual element”, the importance of a counter-hegemonic struggle in the domain of culture and the delicate balance of “war of movement” and “war of position”. With Gramsci, Marxism restored its essential humanism.

Likewise, the burden of ‘scientism’ (we should not forget that Marx too was a child of the European Enlightenment – its rationale of scientific determinism, be it Newtonian theory or Darwinian evolution, proved to be an obstacle. The changing social reality in the 20th century – the reduction of science into an ideology of domination leading to technological violence and instrumental rationality, the growth of non-reflexive culture industry and the mass psychology of fascism, the rise of ‘authoritarian personalities’ like Adolf Hitler, Benito Mussolini and Joseph Stalin – needed a new mode of thinking and analysis that classical Marxism could not provide. A great thing happened. The Frankfurt School emerged and we were meaningfully enlightened by Theodor Adorno’s path-breaking reading of culture industry, Marcuse’s analysis of new forms of social control promoting the practice of ceaseless consumption by ‘one-dimensional man’ and Erich Fromm’s delicate engagement with Freud, Marx and deep religiosity leading to the celebration of ‘being’ rather than ‘having’ mode of existence. A culture-sensitive, dialogic and psychologically-enriched tradition within Marxism emerged. And why should we forget our own M.N. Roy – his reminder of the seeds of authoritarianism in the notion of the ‘vanguard’ or the ‘dictatorship of the proletariat’ and his ‘radical humanism’ and its celebration of some sort of party-less, decentralised democracy? All these experimentations, I believe, could retain the pluralistic tradition within Marxism and save it from the monopoly of its ‘official’ practitioners.

Marx was indeed a turning point – possibly the founder of the most appealing secular religion in modern times. Yet, he missed something deep that the likes of Rabindranath Tagore and Mahatma Gandhi realised. He missed what Tagore would have characterised as the ‘poet’s religion’ – an aesthetically enriched religiosity with a sense of gratitude and prayer, a religiosity that strives for our rhythmic connectedness with the universal: something beyond the parameters of ‘class analysis’. And he also missed what Gandhi would have regarded as a journey to the inner world: a constant work on the ‘self’ for transforming politics into an act of love and sarvodaya. Marx missed this intuitive music of the soul because of his embeddedness in the Western discourse of reason.

But then, this is what life is all about. We have to continuously learn, unlearn and expand our horizons. If we become sufficiently experimental and choose to walk with humanist Marx, poetic Tagore and visionary Gandhi, it is possible to find an exit route from what has been happening in the domain of Indian politics and culture – militant nationalism as an ideology that conceals social contradictions, hyper-masculine aggression in the name of development, poverty amidst vulgar affluence and jobless growth, and a manipulated public sphere selling politics as a ‘brand’ product.

Avijit Pathak is a professor at the Centre for the Study of Social Systems, Jawaharlal Nehru University.