Kanhaiya Kumar: This Election is About the Struggles of Past and Our Hopes of the Future 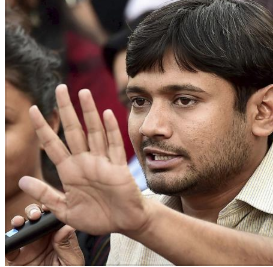 Events unfolded in ways that I didn’t realise when I became an ‘accidental politician.’ I have always been political, but just a few years ago me and my friends would have laughed at any suggestion of contesting an election for parliament.

I may be an academic by training; but we live in a society where we see violence around us, be it literal, mental or systemic, and so more than anything else I am an activist. But now, after five years of the current regime, I am in politics. And yet, I am not a ‘politician.’

The story of who I am is not special. I was like most people around me – in school, I gave polio drops; in college, I worked at a coaching class; in Delhi, as I studied for the UPSC examm, I took up a job. My own brother worked as a guard in Assam, and sent me money for UPSC coaching classes. The government’s addition of CSAT to UPSC however, destroyed my chances of ever being in the civil services. CSAT made the possibility of Hindi-medium and, especially, humanities students entering the all-India services almost negligible; moreover I could not afford the CSAT classes. But I do not look at it with any regrets. It is while studying for the UPSC that I had my academic and political awakening. So far, so normal.

It is when I came to JNU that I realised that I could contribute, through my research, to the betterment of my people. But for me, JNU was never just an institution, it was a space with a life of its own that let you learn freely, not just from texts but from lived experiences and from social movements. Activism was always a priority; even when I contested for the post of president of the students’ union, I never thought that students would support me in such large numbers. This is where my life changed track completely.

Throughout my political journey, I have always questioned and criticised the people who abused their positions of power. The current regime was different though. Police intimidation and lathi-charges happened earlier; but the co-ordinated campaigns of slander, of fake-news, of absolute hatred, and the use of absolutist labels like ‘anti-national’ were very new indeed. There is an old adage, usually attributed to Pericles, which goes:  ‘Just because you do not take an interest in politics does not mean politics does not take an interest in you’. Well I took an interest in politics, and politics certainly took an interest in me.

When we were attacked by the state, we had two options – to fight or to surrender. But in my opinion, we only really had one. So we fought, and that fight brought me where I am today. I am not here to show you what will be the alternative of this or that party; I am here to show you what should be the alternative politics of this country. This alternative politics is not just a fight against oppression, but a fight for freedom and equality. It is not just against the BJP-RSS’s Hindutva chauvinism, but for Ambedkar’s social inclusiveness. It is not just against a mobocracy, but for a truly participatory democracy. It is not my fight. It is ours.

Our vision for the future

The first step to bring about any change is to take politics out of the pockets of the rich, and put it back into the hands of the average taxpayer. It is her/him that funds the government, but her/his issues are completely missing from our debates. Why? Because this is not a government run for the taxpayer, it is a political machine run for the rich. It is such systems that must be brought down; the government must be returned to the people.

Finally, it is through this alternative politics that we must shape our democracy – from a procedural to a participatory one. This alternative politics will help us build a new framework for welfarism, one that is accountable and transparent, yes, but most importantly, one that is inclusive. It should listen to the marginalised and speak truth to power. It must stand for true participation, for the right of every citizen in this nation to speak, to organise and to contest elections. Only with this framework can we build a democracy that stands the test of time, a democracy that helps the India of the future realise the dreams that remain unfulfilled from the past.

We shall fight. We shall win.

Kanhaiya Kumar is the Communist Party of India candidate for the Begusarai Lok Sabha constituency in Bihar.