A large number of opposition parties, both local and national, have objected to the Centre's move. 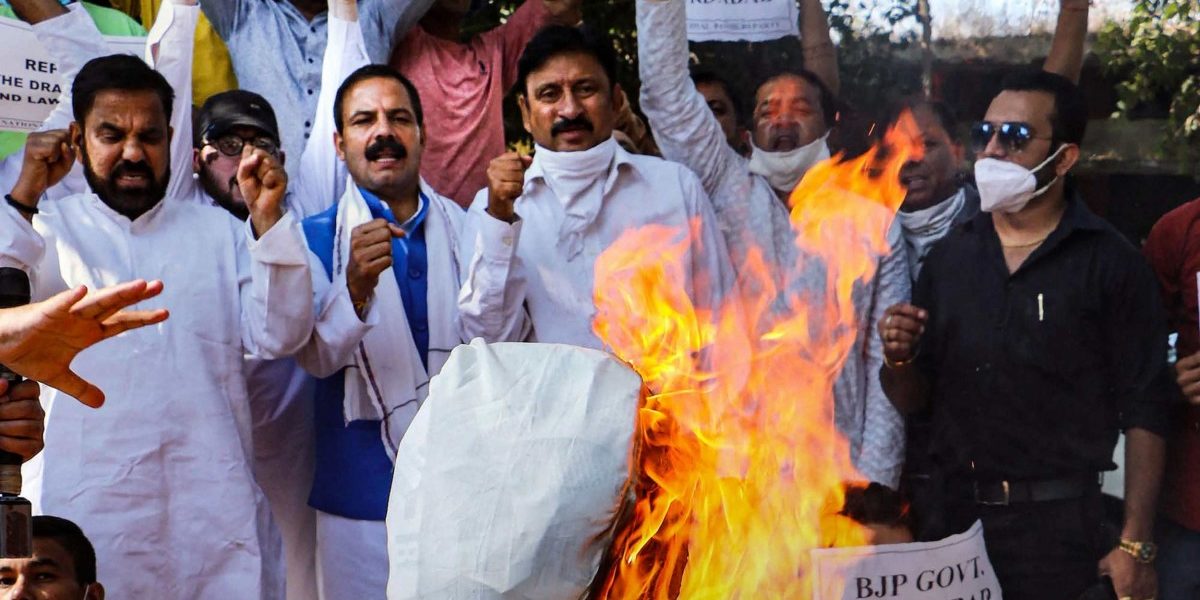 Activists of Jammu and Kashmir National Panthers Party (JKNPP) burn an effigy during a protest against the central government, in Jammu, Wednesday, October 28, 2020. Photo: PTI

Srinagar: As the anger grows in Jammu and Kashmir over the new land laws, which allow any Indian citizen to buy land in the Union territory, the separatist Hurriyat Conference on Wednesday broke its silence and called for a one-day shutdown on October 31 to protest the “anti-people moves” by New Delhi.

This is the first time since August 5 last year, when the Government of India stripped J&K of its special status and split the state into two union territories, that the Hurriyat led by Mirwaiz Umar Farooq has issued a shutdown or protest call.

“A policy of permanent demographic change is aggressively being pushed to snatch our land, destroy our identity and turn us into a minority in our own land,” said a joint statement issued by Mirwaiz and senior party leaders including Abdul Ghani Bhat, Bilal Ghani Lone and Masroor Abbas Ansari.

While denouncing the “incessant anti-people orders” issued by the government of India to “intimidate and psychologically torture” the people of J&K, the Hurriyat said this “imperial approach” was bound to fail.

On October 27, less than a week before the first anniversary of the reorganisation of the erstwhile state of J&K into two Union territories, the Ministry of Home Affairs issued an order, the Union Territory of Jammu and Kashmir Reorganization (Adaptation of Central Laws) Third Order-2020, amending several J&K land laws and introducing some new laws to allow any person from across India to buy land in the region.

Until last year, outsiders were not allowed to buy property including land in the J&K. These rights were exclusives reserved for “permanent residents” of the J&K. But in August 2019, the Centre read down Article 370 and Article 35A to remove this protection.

“One after other, laws are being invented and amended and forcibly thrust upon the people of J&K. From bringing in the arbitrary domicile law and opening-up residency rights in J&K to non-permanent residents to laws exploiting our natural resources, and now brazenly repealing the land law, to let anyone from across India to own land in Jammu and Kashmir, the exclusive rights of people of J&K over their land and property have been taken away in order to ease the settling of outsiders,” the Hurriyat leaders said.

The domicile law was brought in by the Government of India in March this year to replace the Permanent Resident Certificate (PRC) in J&K. The law opened up jobs to the outsiders, which was barred under Article 35A.

Under the domicile law, a person from any other part of country who has been living in J&K for at least 15 years is eligible for all jobs in the UT. The law also extends domicile rights to children of central government employees who have served in the J&K for at least 10 years.

“People of J&K are not some dumb driven cattle who will yield to these imperial laws. People have proved by the strength of their unfailing will and their immense sacrifices, that they are not a dead but alive and determined nation who will withstand such assaults upon them and their motherland,” said the joint statement, adding that the people of J&K completely reject and condemn these “appalling imperial measures.”

Both the domicile law and the new land laws have been described by the mainstream political parties and people as a move by the BJP-led government at the Centre to change the demography of J&K, by settling outsiders in the region.

The Hurriyat asked the people to hold a peaceful shutdown to register their resentment against the laws and also demanded their immediate withdrawal.

The separatist group reiterated its stand of engagement and dialogue among stakeholders for the resolution of the Kashmir issue. “Rather than pursuing a peaceful resolution of the Jammu and Kashmir issue, involving millions of humans living in the uncertainty of a conflict, as per their will and to ensure peace in the region, all attempts are being made to undermine that possibility by the government of India,” the amalgam said.

On Tuesday, the J&K Lieutenant Governor Manoj Sinha had justified the new land laws, saying the decision was made to encourage development and peace in the region.

The latest move by the Government of India has, however, led to a political storm in J&K. While the People’s Alliance for Gupkar Declaration, a coalition of six Kashmir-based political parties, has termed the new law a “massive assault” on the rights of people of J&K, other political parties too have condemned the changes.

J&K Congress chief G.A. Mir said his party rejects the new land law and vowed to fight for the protection of people’s rights. “Betrayal and politics of deceit are the hallmark of BJP, which is hell-bent upon snatching everything from the people of Jammu and Kashmir and Ladakh by amending and bringing in different laws,” he said.

He termed the new land laws as an assault on the rights of people and said Congress would not accept such “anti-J&K decisions” by the Centre.

The J&K Apni Party led by Altaf Bukhari, which is believed to be close to the corridors of power in Delhi, said a party delegation will meet Prime Minister Narendra Modi and Union home minister Amit Shah, to voice the party’s concern and demand protection of land and other rights of the people of J&K and Ladakh.

National Conference MPs Hasnain Masoodi and Muhammad Akbar Lone said that land laws were “another step to alienate people of J&K and curb their constitutional rights.”

“The incumbent ruling dispensation has defaulted on the assurance of Kashmiriyat, Jamhooriyat and Insaniyat and the new notification is a case in point. The MHA notification about (land laws) abates the rights of the people of J&K and places them at lowest pedestal than other countrymen,” they said, in a joint statement.

Some Jammu-based political parties and activists also came out in open against the new land laws, in mounting troubles for the BJP.

NPP leader Bhim Singh said he will knock at the doors of the International Court of Justice, if the Supreme Court of India turns down his plea against the new land laws.

“What the government of India has done is unconstitutional, illegal and irrational. It has stabbed the people of Jammu and Kashmir in their back and has betrayed them. It has violated the Constitution of India,” he said.