While hoardings of chief minister Raghubar Das were accompanied by a picture of Modi, JMM's Hemant Soren appeared to be confident appearing by himself in his party's banners.

Voters display their fingers marked with indelible ink after casting their votes during the fifth phase of the Jharkhand Assembly elections, in Godda district, Friday, Dec. 20, 2019. Photo: PTI

Dumka, Jharkhand: At around 11 o’clock in the morning, shopkeepers in the busy Teen Bazar Chowk of Dumka town, the seat of tribal politics in Jharkhand – also known as the second capital of the state – slowly turn up to their shops to deck them up. Christmas is near and they expect customers from rural areas around the city, to flock here to shop.

But more than buyers, one can see flags of the BJP and its arch-rival Jharkhand Mukti Morcha (JMM) flying atop the houses, through the narrow lanes. This display of rivalry of flags in Dumka indicates not only a contest between Hemant Soren of the JMM and Louis Marandi of the BJP, but a larger electoral contest between the two camps in the 16 constituencies of Santhal Pargana – the area that goes to polls on December 20 in the last phase of the Jharkhand Assembly elections 2019.

“Both Hemant Soren and Louis Marandi are equally inaccessible to the people. While Hemant Soren likes to rely entirely on the thekedars (contractors), Louis Marandi too cares little for the people,” said Nirmala Putul, the poetess mukhiya of Dudhani Kurwa gram panchayat, which forms a part of the prestigious Dumka constituency.

Putul, whose poetry ‘Nagara ki tarah Bajte Sabd‘ (Words sounding like the Nagara) has earned her many literary accolades including the Sauhadra Samman by the Uttar Pradesh government, the Jharkhand Kala Sanskriti Samman by the government of Jharkhand, the Mizo Adivasi Samman by Mizoram among others, said, “Last time, there was a strong Narendra Modi tide and Hemant Soren had been washed away from Dumka seat. This time people have seen both Modi and Marandi.”

Prime Minister Narendra Modi had held a rally in Dumka on December 15 – where he made his controversial “identify them by their clothes” remark – and two days later in Bhognadih, on December 17, Modi, in a bizarre statement, dared the Congress to announce that it would give Indian citizenship to all Pakistanis.

Both Dumka and Bhognadih had been carefully chosen by the BJP as venues for the prime minister’s rally. While Dumka is the second capital of Jharkhand and home to the JMM patriarch and statehood warrior Shibu Soren, Bhognadih is the birthplace of Sido-Kanho – the Santhal warrior brothers who waged war against the British and perished.

Shibu Soren began his political journey from Sathal Pargana after he formed the JMM along with Vinod Bihari Mahato and A.K. Roy, fighting for a separate state of Jharkhand. For the first time the Jharkhand statehood movement, that had its origin in Chotanagpur with Jaipal Singh and was later pursued by N.E. Horo, had shifted to Santhal Pargana.

With this, the seat of tribal politics in Jharkhand too had shifted to Santhal Pargana permanently. Chief minister Raghubar Das, during the last two years, had tirelessly toured the length and breadth of Santhal Pargana and had held numerous rallies to weaken the JMM and win over voters for the BJP. He had also called for a JMM-mukt Santhal Pargana.

But the situation at the ground level appeared to be the opposite of Das’s call. 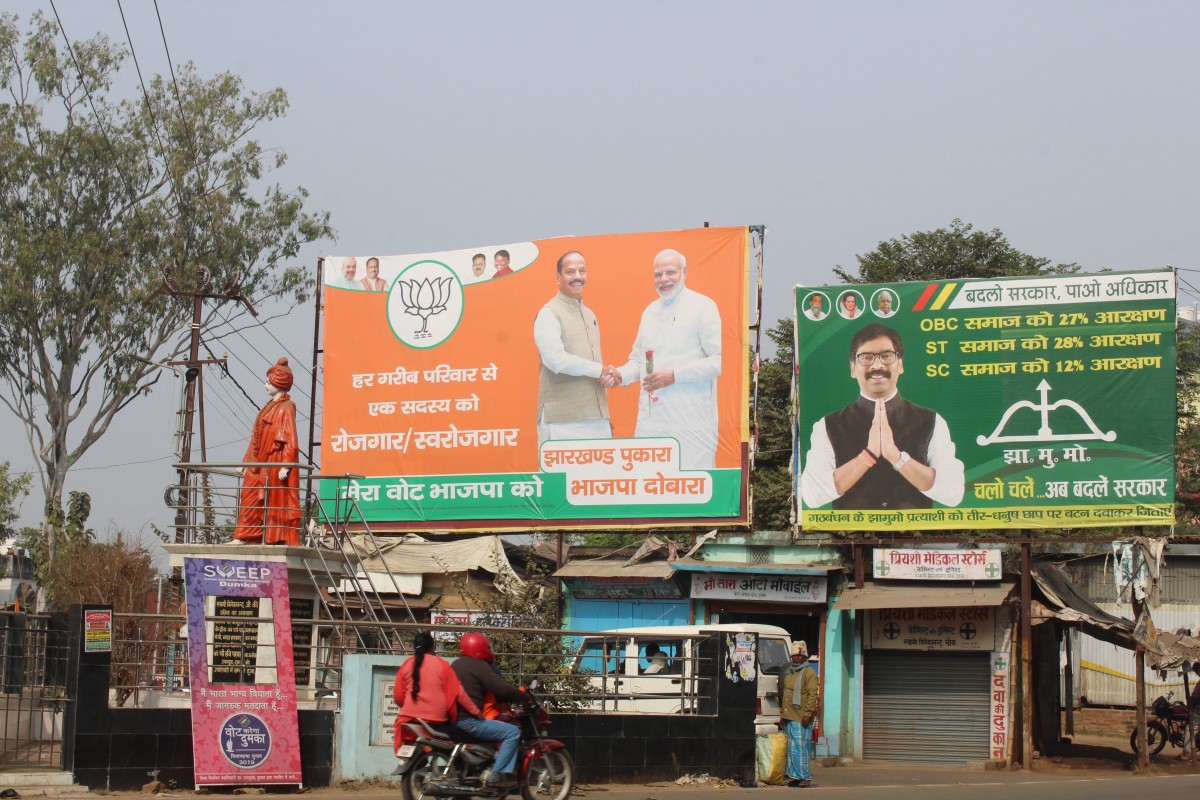 A couple rides past hoardings of JMM and BJP at Swami Vivekanada Chowk in Dumka. Photo: Santosh K. Kiro

Murmu said that since in towns like Dumka, Jamtara and Deoghar among others, a lot of people from Bihar and Uttar Pradesh, who had come and usurped jobs and work, were provided patronage by the BJP, a reason why voters will go back to the JMM.

There is another reason why locals are upset. The sand in the Santhal Pargana rivers is being mined by Bihar contractors and their men, and is smuggled out to Bihar. Due to this, the sand, that normally should be available at Rs 200-300 per tractors, is being sold to the locals at Rs 1000-Rs 1,500 per tractor. Hills in the region too are being cut and converted into chips – all by contractors of Bihar origin. “The local tribal and non-tribal households, who want to construct houses, now have to pay very high,” Murmu said.

The sand in the river Ganges is of poor quality, according to Murmu, and hence high-quality sand from Santhal Pargana rivers like Mayurakshi, Tebra, Bhurbhuri, Dhobe, Vashnai etc, is being eyed by the sand contractors of Bihar. They have acquired sand mining contracts in these rivers from the Jharkhand government and are selling it to the locals at a very high price.

Important leaders whose fate will be decided in this phase of elections include UPAs chief ministerial candidate JMM’s Hemant Soren – who is contesting from two seats, Dumka and Barheit, JMM’s Lobin Hembrom from Boriyo Stephen Marandi from Maheshpur, Nalin Soren from Shikaripara, Congress’s Alamgir Alam from Pakur and Irfan Ansari from Jamtara, among others. Jharkhand Vikas Morcha’ Pradeep Yadav from Godda, former BJP state president Tala Marandi, who had opposed the CNT Act amendment effort and was subsequently denied a ticket, is contesting on a ticket from the Ajsu party from Boriyo. Many voters pointed out that Das’s bad treatment of para-teachers and anganwadi workers will also work against the BJP. Para-teachers had been brutally lathi-charged by the Raghubar Das government when they had held a protest during the statehood day celebrations in Ranchi last year. Many who were severely injured were from the Santhal Pargana. Similarly, anganwadi workers too had been mercilessly beaten up during the demand for increase of remuneration. Most of them hailed from Santhal Pargana.

Even members from the business community feel that the BJP is all talk and no work. “Our business has been badly hit due to bad policies and poor governance. We have become poorer. Many from our business community are no longer with the BJP this time,” said Amit Modi, a businessman of Dumka who deals in pipes.

Also read: Shibu Soren’s Magic Endures in the Santhal Parganas. But Can it Win Polls?

“Though Prime Minister Modi is frequenting Santhal Pargana, there is no Modi wave. We would much like him to sit in his office and work, instead of his flying around and addressing rallies,” Modi said.

Santhal Pargana’s Modi may claim that a chunk of his business community voters have deserted Delhi’s Modi, but government officials say the opposite. “It is true that many in the business community are disenchanted with Prime Minister Modi, but when they go to press the button, they press the lotus, saying: aur kisko denge (who else will we vote for),” said a government official in Dumka, who too has been deployed in poll duty.

The JMM, however, is hoping that supporters of the self-dented BJP will fall in its bag. “There is gatbandhan lahar (coalition’s wave) in the entire Santhal Pargana. It is true that Raghubar Das tried to dent the JMM vote bank with his frequent visits and rallies. But voters are with us,” claimed Ranjit Besra, a JMM leader of Santhal Pargana.

Congress leaders Rahul Gandhi and Priyanka Gandhi too held rallies in Santhal Pargana for JMM-Congress-RJD coalition candidates. Priyanka addressed a rally in Pakur on Wednesday. The contest, however, is tough for both the camps, going by the voting pattern as was candidly pointed out by the government official.