A party spokesperson said its omission was a mistake and that the JMM would be raising the issue in its election campaign. However, a source said the omission was deliberate. 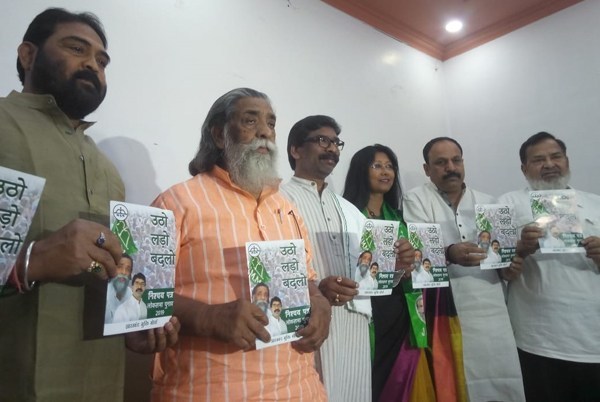 New Delhi: In its election manifesto released on Friday in Ranchi, the Jharkhand Mukti Morcha (JMM)  makes no mention of lynching cases and how the party is going to tackle the problem if voted to power. It may be noted that the state has gained notoriety for cow related mob lynching and recorded one of highest numbers of cases in the country. Most of the victims belong to marginalised communities such as Muslims and Adivasis.

In the last three years, at least 17 Muslim men have been killed in cow related mob lynchings. Earlier this month, in an incident of cow related mob violence, a Christian Adivasi was killed and three others sustained serious injuries.

When asked about non-inclusion of mob lynching as an issue in the manifesto, spokesperson Supriyo Bhattacharya told The Wire it was a mistake by the party. “It is an important issue, I agree, and feel we have committed mistake by not including it. However, we will certainly raise it in our public meetings and during the campaign,” said Bhattacharya. Notably, party strongholds such as Jamtara and Pakur districts have witnessed cow related mob violence.

However, a source in the party told The Wire that the omission was not a “mistake” as the issue of mob lynching was very much there in the draft manifesto. The party seems to have dropped the issue deliberately to appease non Muslim votes, the source added.

The JMM is the second largest party in the opposition coalition — the mahagathbandhan led by the Congress – and is contesting on four out of 14 seats, namely Dumka, Rajmahal, Giridih and Jamshesdpur. Moreover, it is the only opposition party to have won seats in the 2014 Lok Sabha elections – Dumka and Rajmahal in the Santhal Pargana division – apart from ruling the Bhartiya Janata Party (BJP), which won 12. 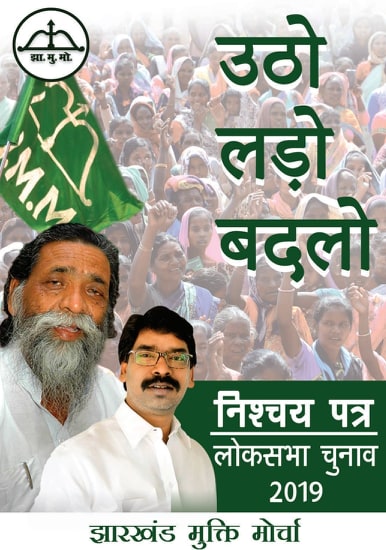 In its ‘Nishchay Patra’, the JMM has termed the BJP government  a ‘double loot ki sarkar’, accusing the ruling party’s Central and state governments of attacking the socio-cultural and economic rights of Adivasis. It also refers to attempts to make changes in the Chhotanagpur Tenancy (CNT) Act and Santhal Pargana Tenancy (SPT) Act – two crucial legislations which had empowered the state’s Adivasis. The JMM manifesto promises to scrap the Land Acquisition Amendment Act 2018 (Jharkhand) and Land Bank Policy.

The party manifesto also talks about the plight of undertrials in the country, especially those belonging to the marginalised communities, and promises to amend existing laws to limit police powers to arrest in petty cases. On the other hand, it promisees to resist amendments in the SC and ST (Prevention of Atrocities) Act and make it powerful and impactful.

The JMM also says that mandatory linking of Aadhar for rations and other social schemes have been a major hurdle in availing them and maintains that the party is not in its favour of any linking that is not voluntary. According to a report, in October 2017, an 11-year-old girl, Santoshi Kumari in Simdega district of the state, died of starvation after her family’s ration card was cancelled for not being linked to Aadhaar. Several similar cases have been reported across the country.

The party in its manifesto has endorsed Congress’s NYAY (minimum income guarantee) scheme. Like the grand old party, the JMM has also promised to give 33% reservation to women in government jobs at the Central level. In addition, the party has promised reservation in the private sector as well.

Elections in the state will take place from Monday and will be be held in four phases, ending May 19. There are four parties in the opposition alliance. Apart from JMM and Congress (contesting on eight seats), the other parties in the grand alliance are the Jharkhand Vikas Morcha (contesting on two seats) and the Rashtriya Janata Dal (1 seat).

In the BJP-led National Democratic Alliance, there are only two parties – the BJP and All Jharkhand Students Union (AJSU) party. While the BJP is contesting on 13 seats, AJSU has been allotted only Giridih.