Key local issues for tribals in the state, such as land rights and the attempt to dilute the Forest Rights Act, find no mention on the generic hoardings puts up by the Congress.

Ranchi: If hoardings of political parties are any marker of a party’s intentions, then local issues seem to have no place in the Congress’ agenda in Jharkhand.

In the state capital, Ranchi, and neighbouring Lok Sabha constituency Khunti, local issues find no mention in hoardings put up by the grand old party. The Congress is the biggest partner in the state-level grand alliance (mahagathbandhan) and contesting seven out of 14 seats.

The hoardings that the Congress has put up are generic and talk about only broad issues such as 33% reservation for women in government jobs, better medical facilities, free education upto Class 12 and its NYAY (minimum income) scheme.

Also read: ‘Gathbandhan’ Will Not be Formidable if the Left is Left Out

There is no mention of Adivasis, despite the state having a large and most influential population of tribals. Their key issues, like amendments in land rights acts and the attempts to dilute the Forest Rights Act, etc do not figure in the campaign material visible so far. It should be noted that over the last few years, there have been massive protest in the state over these changes.

Instead, Congress president Rahul Gandhi’s face adorns most of the hoardings. 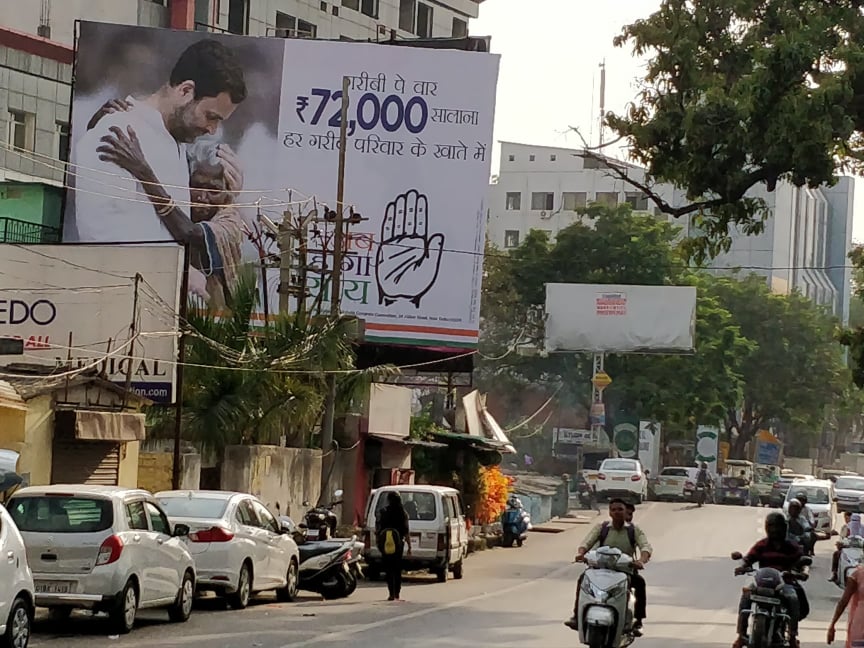 Other hoardings put up by the party feature the party’s Ranchi candidate and former central minister Subodh Kant Sahay. In these too, there is no mention of the main issues that plague the state. Nor is there any mention of the broader issues either; “Sahaj, saral, sabke Subodh (natural, simple, everyone’s Subodh)”, read these hoardings, that have a large image of Sahay along with smaller pictures of other leaders part of the grand alliance.

On the other hand, in the hoardings put up by the ruling BJP Adivasis and Jharkhand have been used as key words, apart from showcasing the party’s report card over the last five years. Moreover, BJP’s hoardings also all-out attack the opposition.

BJP’s hoardings also have photos of state Chief Minister Raghubar Das, at least one more state-level leader of the party, as well as photos of Prime Minister Narendra Modi and the party president Amit Shah. 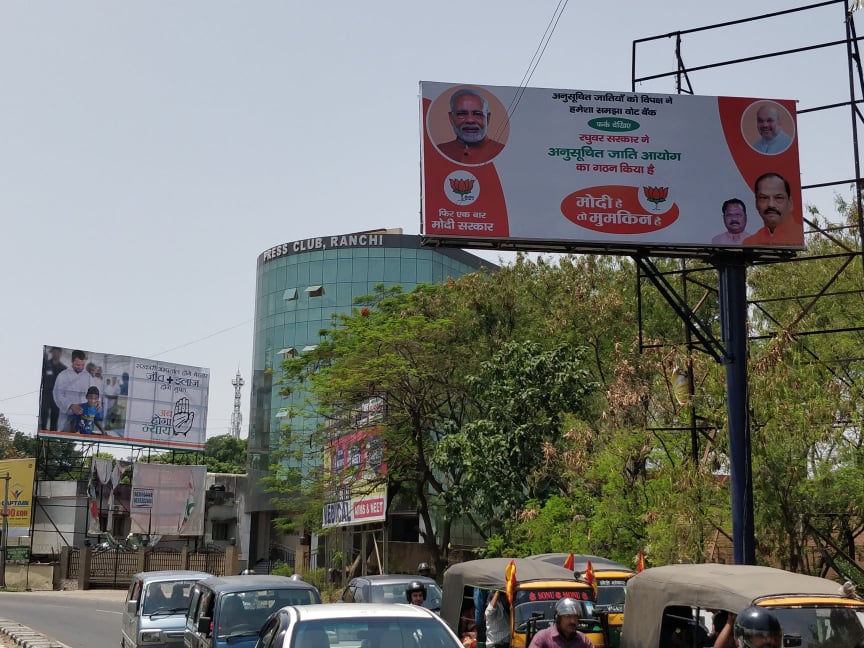 When asked about the hoardings, Jharkhand Pradesh Congress Committee (JPCC) media in-charge Rajesh Thakur told The Wire, “These hoardings are designed and sent to us by the central office (AICC) so I won’t be able to tell you exactly why local issues are missing.”

Agreeing that local issues are important, he added, “A list of local issues, such as land grabbing, starvation deaths, unemployment and corruption in the Momentum Jharkhand Investors Summit, etc. were sent to the AICC by the state unit. And we are hoping that in the second round, those issues will be raised”.

He asked The Wire to contact Pravin Jha, AICC secretary in-charge of communication for further clarification on the matter.

When The Wire contacted Jha, he said, “This is a national election hence local issues do not matter much. Moreover, we are a national party trying to build a national narrative.”

When asked about the status of local issues, the AICC secretary said, “Those issues will be raised in bhashans (public speeches and meetings).”

About why there are no hoardings countering the claims about the work done by the ruling party, Jha said that the part does not “want to indulge in negative campaigning”.

This reporter was then asked to contact AICC media coordinator Rohan Gupta. Despite trying several times, Gupta could not be reached.

Commenting on the Congress’s approach in the state, a local journalist, on the condition of anonymity, said, “Due to their non-seriousness and lack of clear cut strategy, the party has given a cake walk to BJP in many seats where they could have easily tapped into anti-incumbency and made it difficult for the ruling alliance to win.”

“Look at the Hazaribagh seat, they announced the candidate just two days before the last date for nomination. Similarly, they took a lot of time to decide candidates for Khunti and Dhanbad,” he added.

While Hazaribagh has been in the news for mob lynching, Khunti was the base of the popular Pathalgadi movement.

There are total 14 Lok Sabha seats in the state, of which five are reserved for Schedule Tribes (ST) and one for Schedule Castes (SCs). According the 2011 census STs constitute 26.3% and SCs 12.08 per cent of the total population of the State.

Elections in the state will take place in the last four phase from April 29 on. Other parties in the grand alliance are Jharkhand Mukti Morcha (contenting on four seats), Jharkhand Vikas Morcha (contesting on 2 seats) and Rashtriya Janata Dal (1 seat).

In the BJP-led National Democratic Alliance, there are only two parties – BJP and All Jharkhand Students Union (AJSU) party. While BJP is contesting is on 13 seats, AJSU has been allotted only the Giridih seat. Currently, out of 14 Lok Sabha seats, 12 are represented by BJP and the remaining two by the Jharkhand Mukti Morcha.