With Jayalalithaa's Death, Politics in Tamil Nadu is Set to Turn Fluid, Unpredictable

Over the years, Jayalalithaa perfected an idiom of governance that leveraged state-funded populism to fuel a cult of personality that had few parallels anywhere in India. 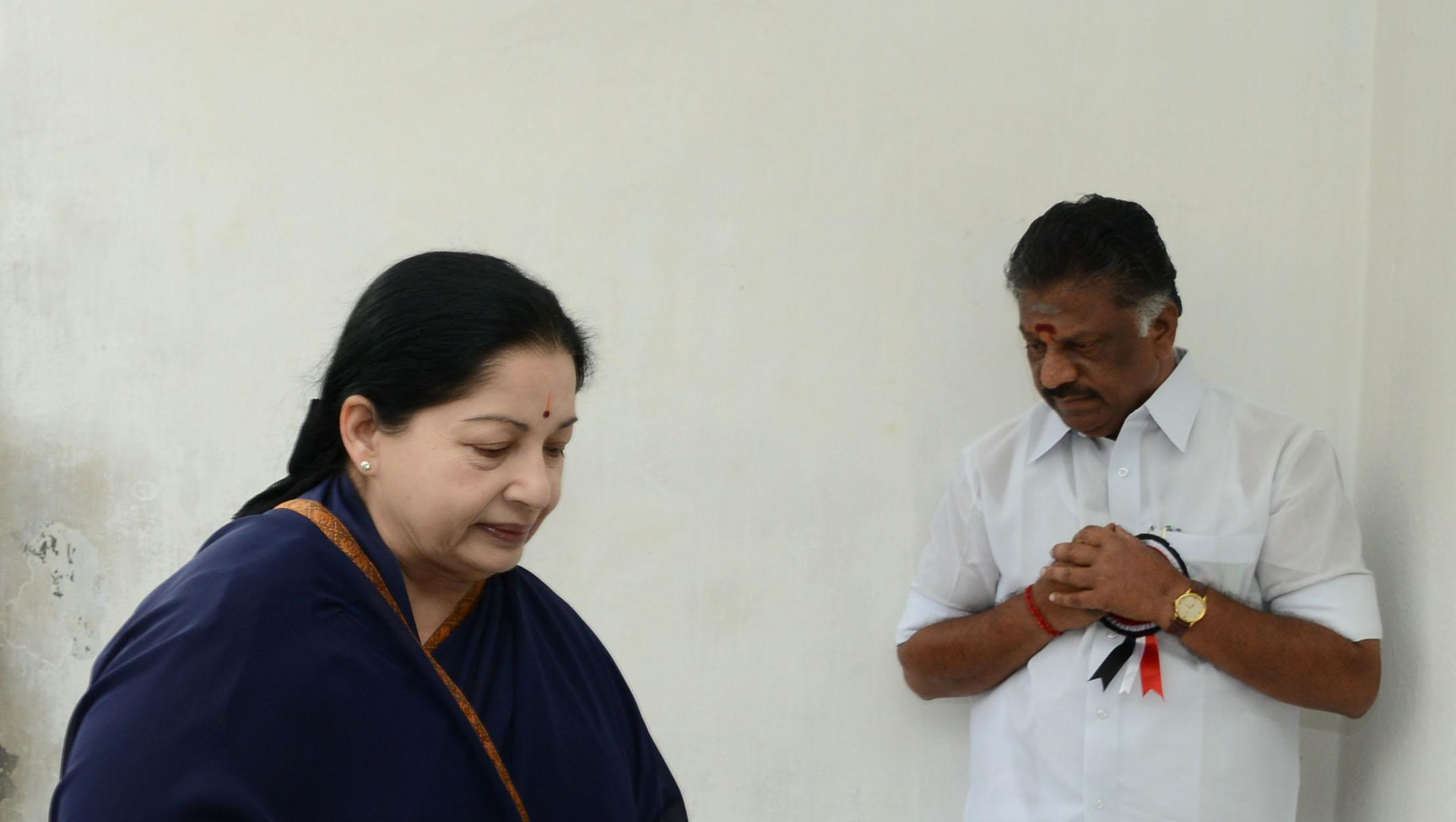 In this photograph from 2013, J. Jayalalithaa arrives at a party meeting while O. Panneersaelvam, who is now Tamil Nadu’s chief minister, waits in the corner. Credit: M. Vedhan, The Hindu.

The death of J. Jayalalithaa on Monday, December 5, brings to an end the life of an extraordinary Indian politician – a single woman who gave up acting in movies to make the treacherous world of politics her own, establishing her leadership in a society where sexism is woven deep into the cultural fabric. But her demise also brings the curtain down on an entire political era in Tamil Nadu, the state she ruled firmly but not always fairly for 15 years over three decades. The certitudes which have governed Tamil politics are unlikely to survive her exit from the stage – an outcome that is at once testimony to the strength of her individual hold over the electorate but also to the essential weakness of her political legacy.

As chief minister, she ran an administration that produced some of India’s best social and economic outcomes despite the populism and caprice that were the hallmarks of her rule. She embodied not just unrestrained executive authority but a following among the party faithful and broad masses of the state that was almost devotional. Over the years, she perfected an idiom of governance that centred around leveraging state-funded populism (Amma canteens, Amma water, Amma pharmacies) to fuel a cult of personality that had few parallels anywhere in India – until the rise of Narendra Modi as BJP leader and eventually prime minister of India. In her party, she was the only person whose voice mattered ultimately. But as her own stature and clout grew, that of others in the party – not to speak of the party itself as an institution – shrunk in proportion. That is why her death places a big question mark over the long-term survival of her party. The smooth confirmation of O. Panneerselvam as chief minister only tells us that the MLAs of the All India Anna Dravida Munnetra Kazhagam (AIADMK) – and Jayalalithaa’s confidante Sasikala Natrajan – do not want to create a situation where infighting leads to fresh elections less than a year after the party romped back to power. Panneerselvam has done the job before, as Jayalalithaa’s personal nominee. As a Thevar, he has the right caste affiliations too, an issue that has been central to AIADMK’s electoral strategy in recent years. But as 2021, or possibly 2019 (when the next general election is held) draws closer, it is hard to see the AIADMK cohering as a formidable electoral force under him or Sasikala or any other party leader.

In the Dravidian-centric politics of the state, Jayalalithaa, supreme leader of the AIADMK, was one pole around which power revolved, the other being the Dravida Munnetra Kazhagam of her arch-rival, M. Karunanidhi. In a twist of fate, the DMK patriarch, now 92, is also ailing. But unlike the AIADMK, there is in place a succession plan of sorts whose strength, paradoxically, lies in the the fact that it is essentially dynastic.

There are, in India, broadly speaking, three types of political parties. The first are those which are cadre-based and ideologically-driven, such as the Bharatiya Janata Party on the right and the Communist parties, the Aam Aadmi Party and possibly the Janata Dal (United) of Nitish Kumar on the left and centre. The second are dynastic parties – that may have had their origin in an ideology or world view, such as the Congress, the Shiv Sena, the DMK, the Akali Dal or the Samajwadi Party but which are today essentially closely-held family properties. The third type are the single leader-driven parties, structured solely around the charisma or cult of personality of the supremo, such as Mayawati’s Bahujan Samaj Party, Mamata Banerjee’s Trinamool Congress and Jayalalithaa’s AIADMK.

Political succession rarely poses existential problems for parties of the first type. The fate of the dynastic parties, on the other hand, depends to a large extent on the number of dynasts and the individual capabilities of the sons or daughters, nephews or nieces, chosen to inherit the political property. But it is in parties of the third type that succession poses the greatest crisis for there is neither the convenience of blood nor a political mechanism to choose a successor, and even if there were, there is certainly no leader who can aspire to play the larger-than-life individual role that the electorate has come to expect of the party.

A woman in Tamil Nadu stands next to the free ‘Amma’ fan provided to her by the Tamil Nadu government. Credit: Shome Basu

The irony is that Jayalalithaa managed to overcome this problem when her own political mentor, AIADMK founder M.G. Ramachandran died in December 1987. At the time, it was far from certain that the mantle of leadership would be hers. Indeed, the dynastic-patriarchal tradition in Indian politics thrust power into the hands of MGR’s widow, Janaki, if only for 24 days. But the party knew its future would be more secure under the charismatic Jayalalithaa and rebelled against its new leader. President’s rule was imposed and the DMK came to power when elections were held. But in the run-up to the 1991 polls, the Janaki faction of the AIADMK meekly returned to the ‘mother’ party. Jayalalithaa won comfortably, becoming chief minister of Tamil Nadu. She was only 43. This is also when she consciously styled herself as ‘amma’, or mother. Kalyanraman explains the significance:

“During a students’ agitation against a hike in the fares of state-owned buses, Jayalalithaa pleaded with students not to disrupt their studies. Barely in her forties, she adopted the role of a mother figure in doing this. Over time, Amma has become a political and marketing brand – a reminder to Tamil Nadu’s poor that ‘The Mother’ is watching.”

From then on, the die was cast and it was clear that the party, despite Jayalalithaa’s own liberal cultural moorings, would go further and further down the autocratic path. The unchecked authority she enjoyed proved disastrous for her and the decisions she took in her first tenure as chief minister – many of which were cited in allegations of corruption – would return to haunt her for the rest of her political career. Unlike the BJP and Congress, which take a more ‘mature’ attitude towards the crimes and misdemeanours of their ‘national’ rivals and seldom launch proper investigations and prosecutions when they come to power, politics in Tamil Nadu was a lot more personal. Thanks to the sharp personal rivalry between Karunanidhi and Jayalalithaa, actual cases got filed, actual investigations were conducted and an incriminating docket was prepared that even at the time of her death was the subject of litigation before the Supreme Court.

The rivalry between the two titans of the state would sometimes get expressed in other, more destructive forms. When Karunanidhi built a grand edifice on Mount Road in order to shift the cramped state secretariat, Jayalalithaa promptly moth-balled the building when she returned as CM in 2011 – until a campaign by The Hindu led her to announce it would be converted into a hospital. A wonderful public library established by the erstwhile DMK government also came into her cross-hairs before she backed off in the face of public pressure. Garden-variety criticism of the kind opposition parties make would, in Tamil Nadu under Jayalalithaa, routinely be turned into a case of criminal defamation against the leader – and the media that reported the leader’s remarks.  As editor of The Hindu during her third – and least capricious term as CM – I had two criminal defamation cases slapped against me for merely reporting what DMK leaders had said in a press conference. While the disproportionate assets matter against Jayalalithaa in the Supreme Court will now no doubt be abandoned, those defamation cases will likely linger on even after her death.

If the AIADMK gradually weakens, it is tempting to speculate over what might take its place. The DMK will almost certainly go into the next elections under M.K. Stalin’s leadership and would hope to profit over the long haul from the death of their most formidable political opponent. But this may also be the moment for the smaller parties – the Pattali Makkal Katchi, the MDMK of Vaiko, the Dalit parties – to try and expand their influence. Vijaykant’s DMDK will also fancy its chances, as will the Congress and BJP, especially the latter.  All told, Tamil Nadu politics which had become rather stagnant of late finally has a chance to turn fluid. And less predictable.