Some of the demands raised included the right to healthcare and the universalisation of the public distribution system (PDS) without Aadhar linkage. New Delhi: At the week-long virtual Janta Parliament that concluded on August 26, opposition leaders proposed the drafting of a Common Minimum Programme, based on resolutions framed during the session, to forge broader unity.

Some of the other demands that were raised included the right to healthcare and the universalisation of the public distribution system (PDS) without Aadhar linkage and a basic income. The session was convened to discuss urgent COVID-19 related policy issues, according to the initiative’s website.

The organisers said that world over, in many countries, arrangements have been made for MPs to convene online and hold sessions as well as committee meetings. “That has not been explored in India so far, though discussions on this have been going on for some time now. The monsoon session of parliament ordinarily should have started by mid-July. With Parliament not being in session, the absence of the most important platform to seek representative accountability during the Covid pandemic has created a crisis of its own,” they said.

After the conclusion of discussions, various leaders from opposition parties praised the initiative and said they would build on the ideas generated during the sessions.

Representing the Indian National Congress, K. Raju stressed on his party’s opposition to the Environment Impact Assessment (EIA) and ordinances in agriculture and proposed that civil society members meet with individual MPs to advocate for these issues.

“With the economic slowdown and COVID-19, the worst sufferers are the poorest of the poor. From the beginning, Congress has been demanding that the government put money into the hands of the poor in the form of a universal basic income. That is the most urgent collective demand,” said Raju.

Communist Party of India (Marxist) leader Sitaram Yechury said that the Janta Parliament had been a useful exercise since parliament had not been convened since the lockdown. Yechury also condemned the recent attacks on civil liberties and the right to food and information and held that a Common Minimum Programme would not be successful by the efforts of a single party or movement.  “We need to have a joint action plan to raise these issues within Parliament and outside,” he said, according to a press release. 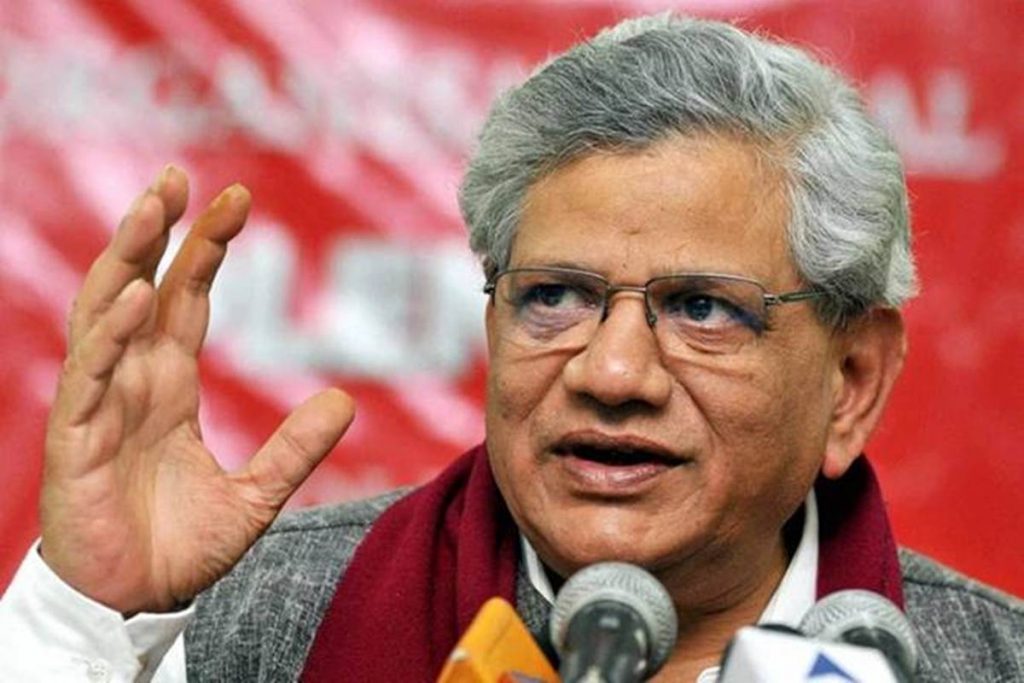 The general secretary of the CPI(M), Sitaram Yechury has also written to the Rajasthan chief minister Ashok Gehlot condemning the lawlessness in the state. Photo: PTI

National Secretary of the Communist Party of India (CPI), D. Raja, raised the issue of electoral reforms and held that the present government was increasingly starting to bypass the parliament.

Kodikunnil Suresh, chief whip of the Congress in the Lok Sabha and a member of the Lok Sabha Speaker’s panel, held that the proposals discussed by the Janta Parliament should be taken into consideration by all the central and state governments. He also expressed concern about the number of ordinances promulgated by the government.

Rashtriya Janta Dal’s Manoj Jha said that the Janta Parliament was a testament to how constructive and productive parliamentary deliberations were and expressed his apprehension about the government’s record of introducing new bills in Parliament on the same day that they had to be considered. “We should strategise together so there is convergence between Parliament House in Delhi and this Janta Parliament which has gathered voices from the ground across the country,” Jha said and added that a common agenda would also be useful for his party in the upcoming elections in Bihar.

Sanjay Singh from the Aam Aadmi Party said that the Centre was not convening parliament in a deliberate attempt to avoid being questioned about its decisions to disinvest from various national assets such as SAIL, COAL and the railways. Singh also criticised the BJP state governments’ handling of the COVID-19 pandemic and cited the example of Uttar Pradesh, where he said two cabinet ministers had passed away due to the novel coronavirus. He also said that the government had failed to provide adequate relief to people during such extraordinary times.

Activist Medha Patkar concluded the session by urging MPs to bring these issues to the parliament and said civil society would rally around them in solidarity and work on a common minimum programme but also search for a “Common Maximum Agenda”. She also expressed concern about other developments in the country and independent institutions like the judiciary while citing Prashant Bhushan’s on-going contempt case. “As civil society, we will have to take some time to discuss the possibility of helping to draft a common agenda for the Opposition,” said Nikhil Dey, leader of the Jan Sarokar collective that hosted the event, according to The Hindu. Dey added the collective also would reach out to individual political parties, including the ruling party with resolutions.

The session was adjourned after 43 hours of discussions after a reading of the preamble of the constitution. A comprehensive set of policy proposals issued by the Janta Parliament in light of the ‘new normal’ brought about by COVID-19 can be found here.