PDP Announces It Will Be Forming an Alliance With Congress, NC in J&K

The move to form a new government is meant to halt the march of Sajjad Gani Lone, separatist-turned-mainstream-politician who shares a cosy relationship with the BJP.

Srinagar: The Congress Party along with two major regional powers of Jammu and Kashmir – People’s Democratic Party (PDP) and National Conference (NC) have discussed the possibility of meeting the governor to stake claim to form government.

Altaf Bukhari, senior PDP leader and former finance minister of J&K, said on Wednesday that the party leadership has conveyed to him that an alliance will be formed with Congress party and NC. Bukhari had a meeting with former chief minister Omar Abdullah at his residence on Gupkar road, following which he spoke to the media.

“This is a move to safeguard the special status of the state. Between 55 and 60 MLAs are with us,” the PDP leader said. “Our identity is under attack. Articles 370 and 35A are under attack.”

This statement is the first public confirmation from the PDP that the party has agreed to form a coalition government with its arch rival, the NC. The PDP was in alliance with the Congress between 2002 and 2008.

Earlier, political leaders from the three parties had told The Wire that their leaders have held week-long “informal meetings” to chalk out a strategy to form a government. A senior Congress leader told The Wire that the parties also discussed the possibility of the “Centre not dissolving the state assembly and avoiding fresh elections”.

Other key agendas of the said meetings include important roles taken up by key leaders of the three parties – both before and after the possible government formation.

“We have had several informal meetings with the two parties (NC and PDP) this week and there are many reasons for this. The governor has hinted at keeping a status quo, which means he will not dissolve the assembly and keep it in an animated state, thus avoiding a fresh election. President’s rule will be imposed soon and it would have been ideal to dissolve the assembly but this has not happened. Instead, the BJP is attempting to break regional political parties and form a new alliance,” the leader said.

A senior political leader from the PDP said on the condition of anonymity that the chief ministerial face of the “grand alliance” has not been decided upon yet. The priority, for now, is a “new government representing a grand alliance”. 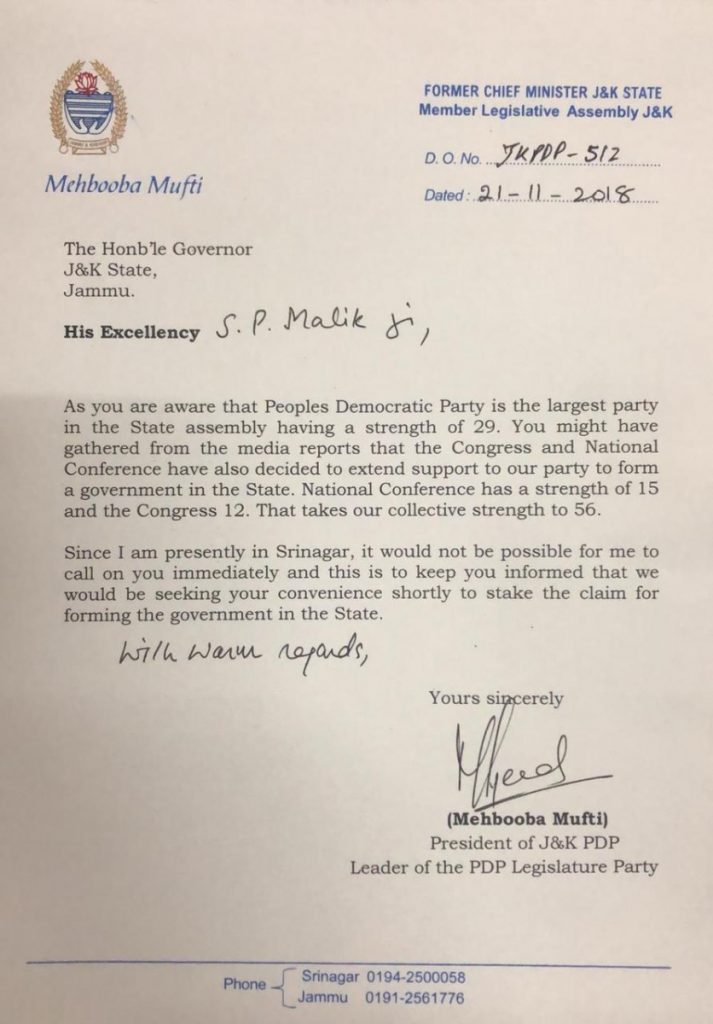 Letter by Mehbooba Mufti to J&K governor S.P. Malik informing him of the possibility of a Congress-NC-PDP alliance staking claim for forming government in the state. Credit: Special arrangement

The PDP has 28 MLAs, followed by NC with 15 and Congress with 12 which will take the alliance well above the majority mark of 44.

“The Congress Party is in no rush to form a new government. We have struggled for last four years and will continue to do so but we will also not stand by while BJP tries back channels to form a new government which does not have the mandate of the people,” said J&K Pradesh Congress Committee president G.A. Mir. He added that the possibility of a formal meeting will be decided by the two major parties this week.

“We have 12 seats while PDP and NC have 28 and 15 respectively. If the decision to meet formally today or tomorrow will come, we will oblige,” Mir added.

Senior leaders from the three parties also said that the move to form a new government is meant to halt the march of Sajjad Gani Lone, separatist-turned-mainstream-politician who shares a cosy relationship with the BJP.

Since the BJP-PDP government in J&K fell on June 16, Lone and disgruntled PDP leaders have been in talks to form a new alliance with the BJP, thus prompting talks of a third front in Kashmir.

Imran Ansari, a powerful PDP leader and now a rebel MLA told this correspondent that Lone stands a chance of becoming the chief minister of the state.

Also read: Ending Alliance With PDP May Not Help BJP in 2019

“There will be only one face in the third front. That will be of Sajjad Gani Lone,” Ansari had told the correspondent in the second week of October.

The BJP has 23 seats in the state assembly and has been relying heavily on a split within the PDP. The state is currently under Governor’s rule which cannot be extended after it completes its six-month period on December 19.

Governor Satya Pal Malik last week reportedly said that the state is headed for President’s rule but the state assembly will not be dissolved, for now.

On Tuesday, Muzaffar Beigh, one of PDP’s founding members and Lok Sabha MP from Baramulla, held a press conference throwing his weight behind the so-called third front.

He said he would “seriously consider” joining a third front led by Lone.

“Sajjad Lone is like my son. If Sajjad is interested in (formation of the third front), it should be encouraged,” Beigh said.

Minutes later, Lone took to Twitter, calling Beigh his “favourite uncle” and said that he was humbled by Beigh’s statement. “I am humbled by Muzaffar Beigh Sahib’s statement. A person of his stature, experience and intellect can be the defining attribute of the emerging third party. I remember him as my favourite uncle during my childhood. I was his pampered brat,” Lone said.