The People's Democratic Party, the BJP's ally in the state, and the National Conference have spoken out strongly against the Centre's call for 'larger debate' on the future of Article 35A. 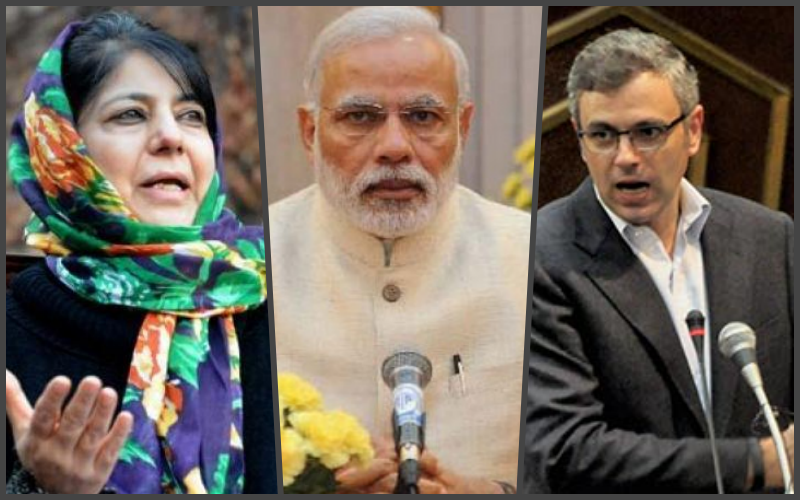 The Centre's decision not to file a counter-affidavit on a petition seeking the repeal of Article 35A has been met with outrage in Jammu and Kashmir. Credit: PTI

New Delhi: The BJP and Sangh parivar‘s attempts to dilute Article 35A of the constitution is being viewed in Kashmir as an attempt to disregard and breach the state’s special status. Article 35A allows the Jammu and Kashmir legislature to define the list of ‘permanent residents’ of the state, who are eligible to vote, work for the state government and own land.

The BJP’s efforts to change this provision – which was one of its election promises and the Sangh’s proposed method to ‘end the conflict’ by changing the state’s demographics – has come into the limelight again because of an ongoing case in the Supreme Court. A petition was filed by Delhi-based NGO We the Citizens demanding that Article 35A be repealed because of its ‘unconstitutional’ character. Attorney general K.K. Venugopal, appearing for the Centre, had told the Chief Justice J.S. Khehar-headed bench that given the “sensitive” nature of the issue, the Centre wanted a “larger debate” on it. He also asked that the matter be referred to a larger bench given the constitutional issues involved; the court agreed, saying a three-judge bench would hear the matter in six weeks (which finish at the end of August).

National Conference leader and former chief minister Omar Abdullah has now told the Indian Express that “if there is debate on (the legality) of the Article, you will have to debate the accession itself,” because the state’s accession to the Indian Union and its special status are “two sides of the same coin.”

“Like Article 370, Article 35A was negotiated between the princely state of J&K and the government of India and it is the bedrock of accession,’’ he said. “How can the Attorney General welcome a debate on Article 35A? Are they ready for a debate on accession? The special status of J&K is enshrined in the Constitution and it cannot be tampered with or removed. It is an article of faith.”

It is not just the opposition in Jammu and Kashmir that has criticised the Centre’s statements. Chief minister Mehbooba Mufti, whose People’s Democratic Party came to power in alliance with the BJP, had said that any attempt to dilute Article 35A would be a fatal blow to Indian nationalists in the state.

“Who is doing it? Why are they doing it? (challenging the Article 35A). Let me tell you that my party and other parties who carry the national flag there (in Jammu and Kashmir) despite all risks… I have no doubt in saying that there will be no one to hold it (if the article is diluted),” Mehbooba said in Delhi at the end of July. Her government also expressed concern at the NDA government’s decision not to file a counter-affidavit to the petitioners in the Supreme Court.

“We were hopeful that the Centre will take a clear view (in the SC) on the issue (challenge to Article 35A) especially after the recent Presidential Order (on GST) where it was reasserted in unequivocal terms that J&K’s special status will be protected,” PDP leader and public works minister Nayeem Akhtar said, according to the Indian Express. “The Permanent Resident Act forms the core of J&K’s special status within the Union. If it is removed, there will be nothing left to our special status.”

The BJP had condemned Mehbooba’s remarks, which the state unit of the party evening saying that Article 35A is “not a sacred cow that cannot be touched”. Both Articles 35A and 370 (granting special status to Jammu and Kashmir) were meant to be temporary, the party argued.

Historians have also questioned the petitioning NGO’s claim that Article 35A is unconstitutional, saying that to claim the article it is not legal because it was not added to the constitution as an amendment but in the appendix is “specious”, as the article is part of a much larger system put in place in Jammu and Kashmir after independence and the state’s accession. In an article in Hindustan Times, historian Srinath Raghavan has written:

“…the article [35A] does not by itself confer any right on J&K state subjects. The Instrument of Accession signed by the Maharaja of Kashmir in October 1947 specified only three subjects for accession: foreign affairs, defence and communications. In July 1949, Sheikh Abdullah and three colleagues joined the Indian Constituent Assembly and negotiated over the next five months the future relationship of Kashmir with India.

This led to the adoption of Article 370, which restricted the Union’s legislative power over Kashmir to the three subjects in the Instrument of Accession. To extend other provisions of the Indian Constitution, the Union government would have to issue a Presidential Order to which state government’s prior concurrence was necessary. Further, this concurrence would have to be upheld by the constituent assembly of Kashmir, so that the provisions would be reflected in the state’s constitution. This implied that once Kashmir’s constituent assembly framed the state’s constitution and dissolved, there could be no further extension of the Union’s legislative power. This was the core of J&K’s autonomy.

Following another set of negotiations in 1952 between New Delhi and Srinagar—known as the Delhi Agreement—several other provisions of the Indian constitution were extended to J&K via a Presidential Order in 1954. Among other things, this order empowered the state legislature to regulate the rights of permanent residents. These were subsequently defined in the J&K constitution of 1956. Article 35A of the Indian constitution merely clarifies the different status of J&K in this regard. Questioning the validity of this Article has no bearing on the rights of state subjects. Nor can the Presidential Order of 1954 be questioned without questioning the validity of other provisions of the Indian constitution it extended to J&K. What’s more, such orders have periodically been used to amend the state’s constitution.”

The Jammu and Kashmir constitution, adopted in 1956, defines a permanent resident as a person who was a state subject on May 14, 1954, or one who has lived in the state for ten years and has legally bought immovable property there. This definition can only be changed if the Jammu and Kashmir legislature passes the amendment with a two-thirds majority.