Will the Centre Listen to Mehbooba's Repeated Request for Dialogue in Kashmir?

BJP's decision to oppose the other parties' call for a unilateral ceasefire suggests that the Centre won't let go of its iron-fist approach. 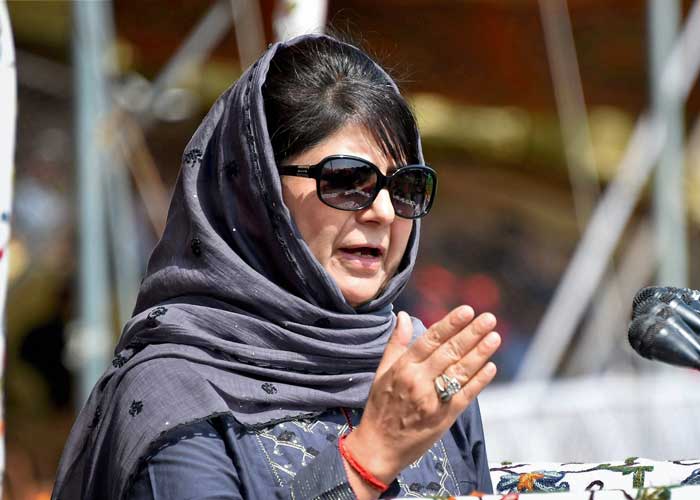 Srinagar: In the last ten days, at least 13 civilians have been killed in Kashmir, including six in the volatile Shopian district. The killings took place at a time when the state government was preparing to reopen its offices in the summer capital of Srinagar last week, and hoping for a peaceful beginning.

The violent chain of events triggered another wave of protests across the region, after which authorities suspended mobile internet for three days and closed down all educational institutions.

Since then, people are gradually resuming normal activity. But chief minister Mehbooba Mufti knows the situation could deteriorate at any time, given the frequent encounters between militants and security forces the Valley has been witnessing.

There is a long summer ahead, and in view of the rising civilian fatalities and protests that follow, the government, it seems, has run out of ideas on how to deal with the situation. That the Centre continues its iron-fist policy on Kashmir has only added to Mehbooba’s worries.

In the last two months, the embattled chief minister has urged the Centre at least seven times to restart dialogue on Kashmir. The latest time was last Monday, when five civilians including two teenagers were killed in forces’ action on protestors in Shopian, following the encounter in which five militants were gunned down. But every time, the Centre has not followed through.

The ruling Peoples Democratic Party (PDP), headed by Mufti, and other political parties have been pushed to the margins in Kashmir, as people’s anger grows. Not a single party, ruling or opposition, has been able to hold a public rally. The situation is particularly bad in the south, which continues to remain tense due to frequent gunfights and civilian causalities.

It is against this backdrop – with the threat that mainstream politics may become redundant – that the chief minister on Wednesday (May 9) chaired a four-hour all-party meeting to try and find a way forward.

Coming out of the meeting, Mehbooba told the media that all parties unanimously agreed on the need for a unilateral ceasefire in Kashmir

“Everyone (all parties) agreed that we should appeal to the Centre to consider a ceasefire like the unilateral ceasefire in (former Prime Minister Atal Bihari) Vajpayee’s time in Ramzan (later this month) till Amarnath yatra and Eid,” she said.

The “joint appeal” for a ceasefire came days ahead of the prime minister’s visit to Kashmir, and has been endorsed by the New Delhi-based Concerned Citizens Group.

“The security forces must observe the ceasefire strictly and should fire only when fired upon,” reads a statement issued by the group, adding the Centre must initiate a purposeful dialogue with all stakeholders in a time-bound manner. Members, including Yashwant Sinha, Wajahat Habibullah, Kapil Kak, Bharat Bhushan and Sushobha Barve, have also appealed to “all concerned” in J&K to abjure violence during Ramazan and the Amarnath yatra and respond positively to the initiative of the government, if taken.

A senior PDP minister said the “all-tough approach” of the Modi government towards Kashmir has left the PDP disappointed. “Is killing the solution? If the last few years are any indication, this approach hasn’t taken us anywhere, and in fact the situation has gone from bad to worse,” the minister said, asking not to be named.

Every civilian killing, he said, was breeding more anger on the ground. “Today we can’t travel around in our own constituencies, not even in our own localities,” the minister said, terming the prevailing situation “grim”.

Official figures about rising fatalities this year suggest he is right. At least 29 civilians have been killed in security forces’ action on protesting youth since January 1, while militants have killed seven civilian for their links with the forces, apart from a BJP activist in Shopian. On the other hand, the number of militants killed this year so far has already crossed 50, including some top commanders.

It is the civilian fatalities which have lead to repeated cycles of protests and anger. A civilian was crushed under an armoured vehicle in the downtown area of Srinagar on May 7 during protests which broke out after the forces gunned down three militants in the highly congested Chattabal area.

The next day, in Shopian, ten persons including five civilians were killed by the forces and a few days later a youth injured during the clashes succumbed to his injuries at at Srinagar hospital.

The situation turned even uglies when R. Thirumani, a 22-year-old tourist from Tamil Nadu, was killed after being hit on the head with a stone during a protest on the city’s outskirts. He died at a local hospital.

“The operations against the terrorists have been a success, but it is the refusal of the civilian population to stay away from gunfight sites, despite repeated warnings, which is a cause for worry,” a senior police official from South Kashmir told The Wire.

The official, however, hurried to add that killing militants could only help “contain the situation”. “It will not lead to a solution (to the Kashmir issue). That will instead come from a political initiative.”

Several top officials from both the J&K police and the army have in the past repeatedly supported the idea of dialogue in Kashmir, including director general of police S.P. Vaid and Major General B.S. Raju, head of the Victor Force which performs counter-insurgency operations in south Kashmir.

A senior political analyst from Kashmir said the urgency shown by the state government in pushing for dialogue is the outcome of the “compelling situation” it finds itself in.

According to him, the situation in the Valley has gone from “bad to worse” and has “badly affected” the image of the chief minister and the PDP.

“We understand the compulsions of this government to press for talks, but the question is whether New Delhi has any compulsion to break the ice and accommodate wishes and aspirations of the state government. There doesn’t seem to be any compelling reason for them to do so, especially when the BJP is using Kashmir and Pakistan (as campaign issues) for (the upcoming general) elections,” the analyst said, adding that the J&K government has been “squeezed on all fronts”.

“The tourist season has begun on a bad note…the civilian killings have not stopped. Unfortunately, the state government is left with only wishes for talks on Kashmir,” he said. “The call for ceasefire is a desperate attempt by the state government to get a breather to try and reclaim lost ground in the Valley.”

With the region caught up in a vortex of violence and Valley-based political parties calling for a truce, will the Centre respond this time?

The prospects seem bleak given that on Thursday, the BJP, Mehbooba’s ally, said the party didn’t give consent to any proposal on a ceasefire during the Wednesday meeting and would instead “oppose” it.

“It isn’t in national interest. The demand is aimed to give a way out to demoralised militants, ease pressure and save them,” BJP state chief spokesperson Sunil Sethi told a press conference in Jammu. According to a party insider, this press conference was called on directions from the high command to make the party’s position clear.

The BJP’s opposition could not only point to the fate of the ceasefire demand, but also suggest a further weakening of Mehbooba’s position in the government.