The NDA enjoys a majority in the lower house of parliament and was expected to see through the moves. 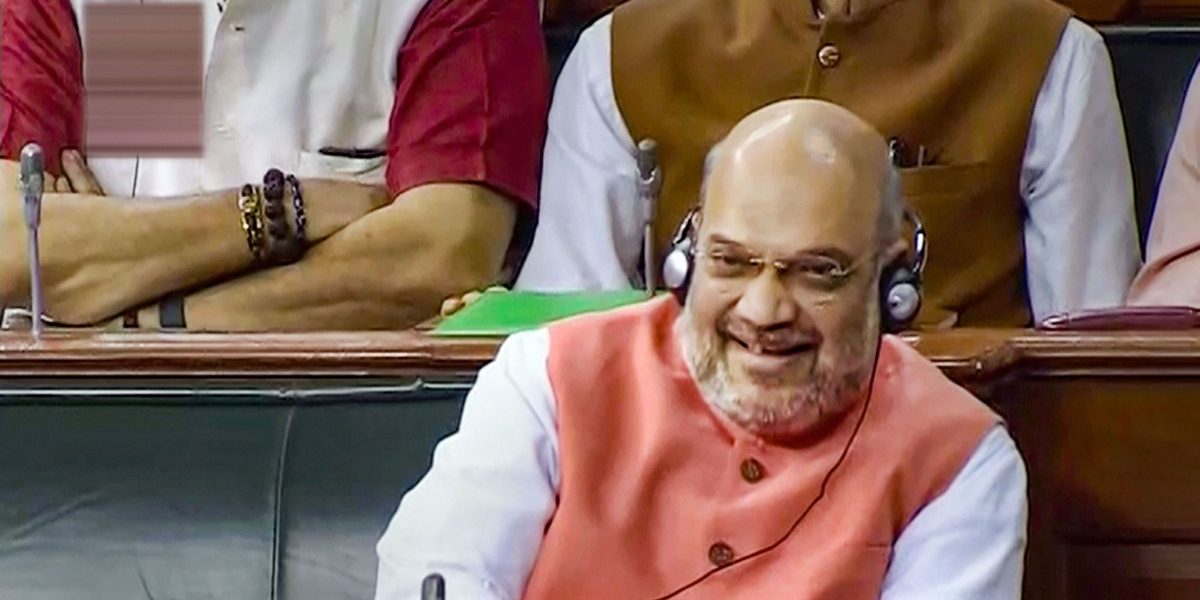 Home minister Amit Shah in the Lok Sabha during the debate on Article 370 and the reorganisation of J&K. Photo: PTI

New Delhi: After a day of debating the Centre’s moves to revoke Article 370 and bifurcate the Jammu and Kashmir into two Union Territories, the Lok Sabha on Tuesday passed the resoective resolution and Bills.

The BJP-led National Democratic Alliance enjoys an overwhelming majority in the lower house of the parliament and was expected to see through the moves. The resolution to revoke Article 370 was passed with 351 votes in favour, 72 against and one member abstaining.

The Jammu and Kashmir Reorganisation Bill was also passed by the Lok Sabha.

After the Bill and the resolution were passed, the Lok Sabha adjourned sine die. While according to the schedule, the house was supposed to be adjourned till Wednesday, parliamentary affairs minister Prahlad Joshi had earlier requested the speaker to adjourn the Lok Sabha sine die on Tuesday. He said once the discussion on the Bill and the resolution ends and they are put to vote, the house would have finished all the matters to be discussed.

The government has issued a gazette declaring that Article 370 would cease to be operative from Tuesday itself, hours after the resolution was passed in the Lok Sabha.

The order says “all provisions of the Constitution, as amended from time to time, without any modifications and exceptions, shall apply to the State of Jammu and Kashmir”.

Article 370 shall cease to be operative in Jammu and Kashmir from August 6, 2019 onwards. Government notifies President’s declaration in the Gazette of India, within hours or Lok Sabha passing the resolution on Tuesday pic.twitter.com/U6rmsro0wj

Speaking to an NDTV reporter in Srinagar, National Conference chief Farooq Abdullah said on Tuesday afternoon that home minister Amit Shah was ‘lying’ when he said in the Lok Sabha that he had not been detained. “I was detained in my own house,” said a visibly emotional Abdullah.

Shah had earlier denied in the Lok Sabha claims of the former J&K chief minister being detained, saying the leader was “neither detained nor arrested; he is at his home on his own will.”

The Lok Sabha on Tuesday morning began discussions on the Jammu and Kashmir Reorganisation Bill and the resolution on reading down Article 370 of the constitution which, which was passed by the Rajya Sabha on Monday. A number of opposition parties on Monday had supported the move, making things easier for the government. Others, however, criticised the government’s decision as well as the hush-hush and rushed manner in which the changes were brought in.

Home minister Amit Shah defended the decision in the Lok Sabha, at one point even standing up to shout that they (the government) “would give their lives” to ensure the unity of India, including Kashmir.

Also read | Why Jammu and Kashmir Was Dismantled

“This is a historic moment in India’s history. What we’re discussing today will impact generations. Many have been questioning the legality of the president’s order that I brought in Rajya Sabha yesterday. Parliament has the right to make laws on Jammu and Kashmir,” Shah said.

The DMK had earlier in the day put forth its strong disagreement with the resolution, as well as the government’s decision to take political leaders in the Valley into custody. “Farooq Abdullah, a member of this House is missing,” party MP Dayanidhi Maran said. “He is arrested. We have no intimation about his whereabouts. You as a Speaker should protect the members. You should be neutral.”

West Bengal CM, Mamata Banerjee: I have no information about Farooq Abdullah, Omar Abdullah and Mehbooba Mufti. I appeal to the government that they should not feel isolated. They are not terrorists. They should be released in the interest of the democratic institutions. https://t.co/t6ydEA2HW5

The Congress appears divided on the issue. A number of member have tweeted saying that in their “personal opinion”, revoking Article 370 is a good thing and they stand behind the decision. The party, though, has said that it disagrees with the move. Former Congress president Rahul Gandhi tweeted that the government was “unilaterally tearing apart J&K, imprisoning elected representatives and violating our Constitution”.

National integration isn’t furthered by unilaterally tearing apart J&K, imprisoning elected representatives and violating our Constitution. This nation is made by its people, not plots of land.

This abuse of executive power has grave implications for our national security.

Also read | ‘The Arrest Is an Attempt to Break Her Spirit,’ Says Mehbooba’s Daughter

Inside the Lok Sabha too, the Congress failed to put up a convincing opposition to the Modi government. When Amit Shah asked Congress’s Manish Tiwari to make the party’s stand on the matter clear, Tiwari said, “Things can’t always be measured in terms of black and white, you have many shades of grey in between.” He argued that the problem was that the Jammu and Kashmir assembly (which doesn’t exist at the moment as the state is under president’s rule) wasn’t consulted.

Congress’s Adhir Ranjan Chowdhury also caught eyeballs when he disputed the Centre’s claim that Kashmir was an “internal matter”. Several commentators said that his lack of proficiency in Hindi may have led him to make what people are calling a “self-goal”.

Unlike the Rajya Sabha, the Modi government has a clear majority in the Lok Sabha. It should therefore have no problem passing the resolution as soon as it is put to a vote. Opposition parties including the YSR Congress, Telangana Rashtra Samithi, Aam Aadmi Party and AIADMK have also expressed their support for the move.