The decision was taken at a meeting of all signatories to the Gupkar Declaration from last year. Jammu and Kashmir National Conference President Farooq Abdullah addresses a press conference along with his son Omar Abdullah, Peoples Democratic Party (PDP) President Mehbooba Mufti and others after meeting of signatories to the Gupkar declaration, at his residence in Srinagar, Thursday, October 15, 2020. Photo: PTI

Srinagar: In a significant development, political parties in Jammu and Kashmir that are signatories to the ‘Gupkar Declaration’ on Thursday formally announced the formation of an alliance to “constitutionally fight” for the restoration of the erstwhile state’s special status.

Top leaders of these parties met at the residence of National Conference president Farooq Abdullah in Srinagar, and reaffirmed their commitment to fight unitedly for the rights of people which were “unconstitutionally snatched” on August 5 last year, the day the Centre read down Article 370 and divided the state into two union territories.

“We have named this alliance as People’s Alliance for Gupkar Declaration,” Abdullah told reporters after the meeting. “Our battle is constitutional; we want the government of India to return to people of the state the rights they were enjoying prior to August 5, 2019.”

Also read: Why Has the ‘Back to Village’ Programme Failed to Take-Off in Kashmir?

“We discussed all the issues concerning the future of our people,” said Abdullah, reiterating the parties’ commitment to the Gupkar Declaration.

The Gupkar Declaration was a unanimous resolution passed by all mainstream political parties, with the exception of the Bharatiya Janata Party, at Farooq’s residence on August 4 last year, the day before the Centre revoked J&K’s special status. As per the declaration, the parties had resolved they would stand “united and defend identity, autonomy and the special status of the JK against all attacks and onslaughts whatsoever”.

Today was the first time after August 5 last year that all the signatories to the declaration met to discuss their future strategy. Farooq had on August 15 this year called an all-party meeting to discuss the situation in Kashmir, but the administration did not allow the meeting to take place.  Later, on August 22, the parties passed a joint resolution, vowing to carry forward the Gupkar Declaration.

Farooq, who is a former J&K chief minister and current MP from Srinagar, said the meeting was also held to greet the PDP chief after her release from detention. “We congratulated Mehbooba Mufti who has been released from detention. It was totally illegal and unconstitutional,” he said, while demanding the release of other political leaders under detention.

Soon after her release, Mehbooba had said that political leaders and people of Kashmir will never forget the “humiliation caused by the Centre’s decision to abolish the special status of Jammu and Kashmir”. “We have to get back what Delhi snatched from us in an undemocratic and illegal way,” she had said.

The National Conference chief said the alliance will also reach out to people and political parties from other regions including Jammu for a broader consensus on the issues confronting J&K. “We want to have a broader discussion on the issues,” he said. 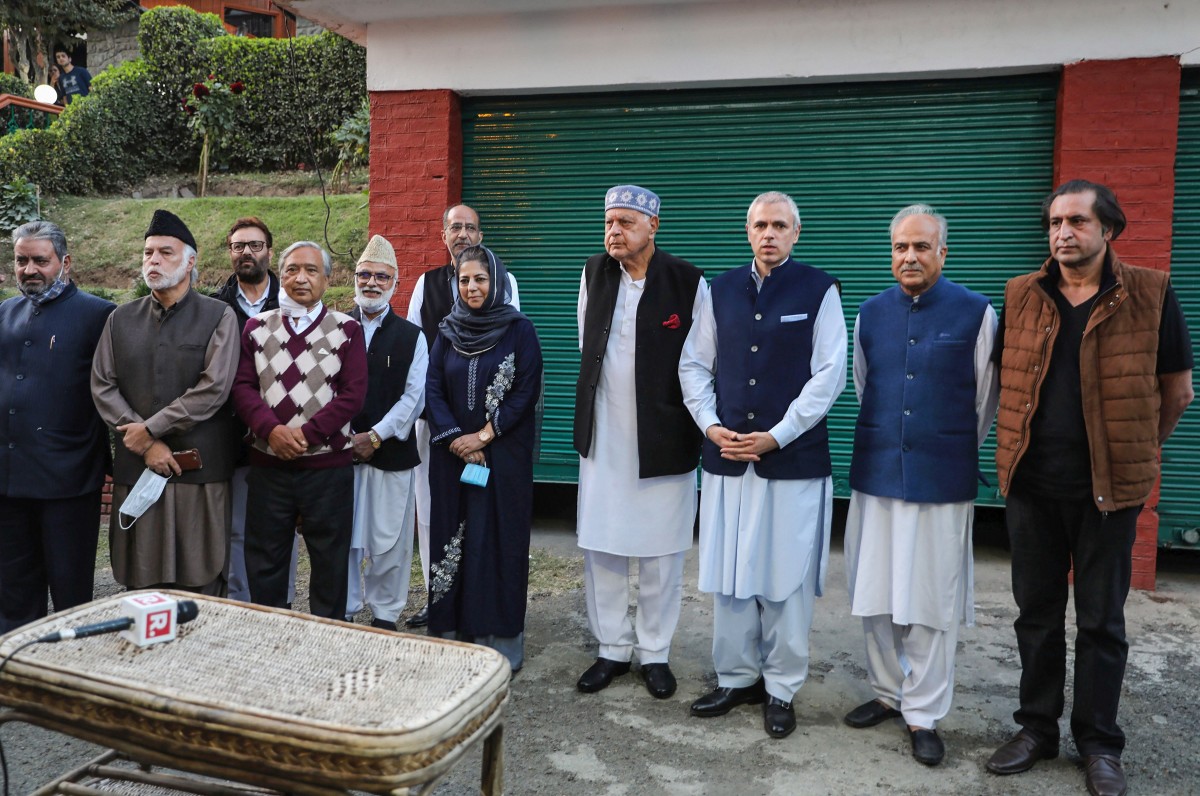 Tarigami, who attended the meeting, told The Wire that the leaders discussed the implication of the decisions taken by the Centre on August 5 and onwards, on the future of the people of J&K and Ladakh. “We reiterated that whatever the government of India has done is an assault on the relation between J&K and the Union of India. There is no question of accepting anything other than restoration of J&K’s special position and Article 370 which were snatched from us in an authoritarian and undemocratic way,” Targami said.

He said the new alliance will not remain confined to political parties only. “We will reach out to Kashmiri Pandits, ethnic and regional groups, civil society, business community and everybody else in Kashmir, Jammu and Ladakh, for the larger cause,” Targami said.

Also read: Rambagh Encounter: After Years of Relative Calm, Militancy in Srinagar on the Rise Again

Though the leftist leader said the future activities of the alliance will be driven by the “agenda” to fight for restoration of J&K’s special position, he said the individual parties will continue with their “own individual  activities”.

In the August joint resolution, the parties who are signatories to the Gupkar Declaration have vowed that their “individual political activities will be subservient to the sacred goal of reverting to the status of J&K as it existed on August 4, 2019.”

Asked whether today’s meeting discussed participation in the assembly elections, if and when they are announced, Taragami said: “The issue wasn’t discussed at all. It is irrelevant to discuss the issue at this point of time.”