The leaders condemned the incident as an attempt to malign the indigenous movement seeking right to self-determination. A protest against the unfurling of an IS flag at Jamia mosque in Srinagar. Credit:Twitter/Mirwaiz Umar Farooq

Srinagar: Days after masked youth unfurled an Islamic State (IS) flag at the historic Jamia mosque in the heart of the summer capital Srinagar, a collective of separatists, civil society groups and trade bodies are planning to take on the terrorist group’s supporters.

A protest against the ‘desecration’ of the mosque has been scheduled for Friday. Separatists, under the banner of Joint Resistance Leadership (JRL), civil society groups and trade bodies in the Kashmir Valley are expected to participate in the protest.

It will be led by Mirwaiz Umar Farooq, separatist leader and the Valley’s head priest who delivers Friday sermons at the mosque. The “peaceful protest” on January 4 will be joined by JKLF chairman Muhammad Yasin Mailk and representatives from the Syed Ali Shah Geelani-led separatist group.

“All of us need to stand up and defeat the elements which are trying to malign our struggle,” Farooq said, referring to the December 28-incident at the 624-year old mosque, which triggered a torrent of condemnation and outrage across the Valley. Soon after the congregation prayer last Friday, a group of masked youth forced their entry into the mosque. They created a ruckus and waved an IS flag. One person even climbed the pulpit and waved the flag. The mosque was largely empty at the time.

Two days later, Farooq met Malik and Geelani to garner support against the “shocking” incident. “We discussed it in detail… the mosque is important from both the religious and political point of view. We discussed it and felt it was definitely a well thought attempt to divert our movement towards something which is totally alien and is globally condemned,” Mirwaiz said about the meeting, which finalised Friday’s protest program.

After the meeting, Farooq, joined by Malik, had driven to the mosque and addressed the gathering there, asking people to be vigilant and “expose the black sheep involved in the act”.

On Wednesday, Farooq led a protest march to the mosque. Joined by traders and civil society members, he cleaned the pulpit. “Not only has the incident saddened the people of Kashmir, but there is growing demand for isolating these elements (IS supporters),” Mirwaiz said, addressing people.

He stressed upon the need for a collective effort to unveil the masked faces responsible for the desecration of mosque. He urged youth to remain vigilant and defeat “nefarious designs of enemies”.

“This is a vicious attempt to cause dissension among the Muslim fraternity in Kashmir. The people of Kashmir don’t have any global agenda. Our indigenous struggle is for the right to self-determination,” he said.

Later, Mirwaiz chaired a meeting of Awami Action Committee, a scoio-politcal organisation he leads. “It [the unfurling of the IS flag] was a move to usurp a politically significant pulpit and a ploy against separatist leadership. We will not let these miscreants hijack our movement,” he told the meeting, toughening his stand against those responsible for the incident. 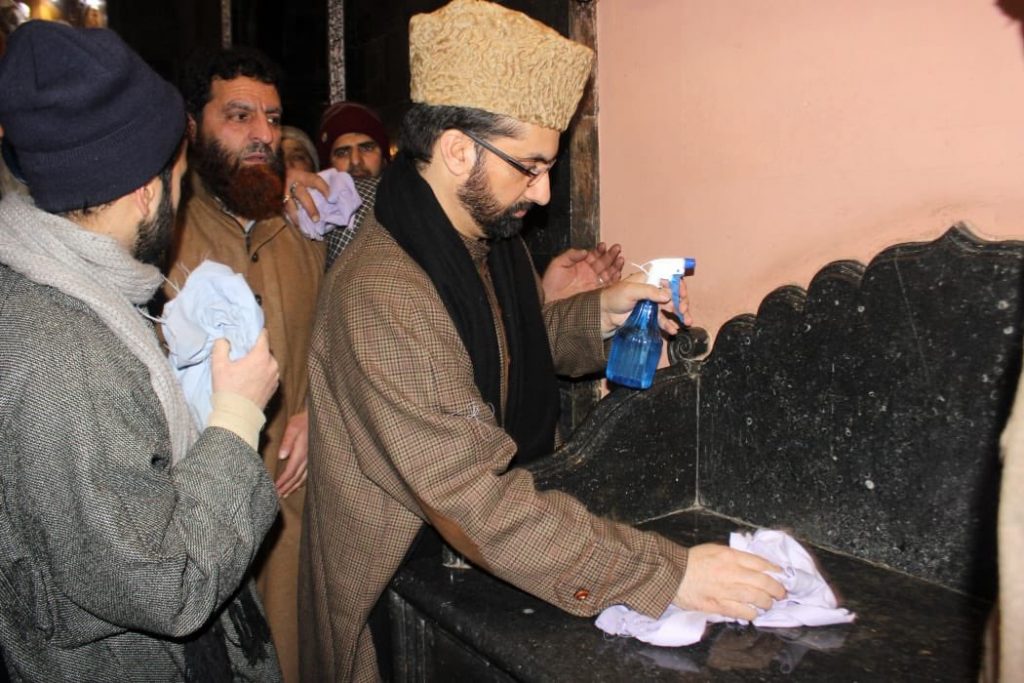 Kashmir Center for Social and Development Studies (KCSDS), a civil society forum, termed the incident as a “deplorable act”. “This unfortunate act needs to be condemned by one and all. The Jamia mosque epitomises peoples’ identity, struggle and political aspirations. A sponsored group of miscreants tried to defame the indigenous Kashmir movement by linking it with global miscalled Islamic terrorist movement,” the forum said its chairperson Hameeda Nayeem.

“These underhand tricks played by invisible forces through their hoodlums are part of a psychological war waged here to create dissension in people and fragment the unified cohesive community to sabotage not only the resistance but to obfuscate the reality for outsiders,” Nayeem said.

Farooq said separatist leaders, including Yasin Malik, representatives of business bodies and civil society groups will offer Friday congregation prayers at the Jamia mosque. They will later participate in the protest against the “desecration of the mosque and attempts being made to link the Kashmir struggle with ISIS”.

He invited people from all walks of life to join the program, adding that the mosque is the fulcrum for the people’s aspirations and their political rights.

The Kashmir Economic Alliance (KEA), an umbrella organisation of different trade bodies, has already lent its support to the program.

“We can’t afford to sit silent…there is a need to expose these miscreants who want to defame Kashmir. Friday’s program is important as it will send the message loud and clear,” said KEA chairman M. Yasin Khan.

IS presence in Kashmir minimal

Addressing a media conference in Srinagar on Wednesday, J&K police chief Dilbagh Singh ruled out the possibility of a large-scale presence of the IS in Kashmir, though he said the ideology was radicalising youth in Kashmir.

“A section of youth is being radicalised. Otherwise, the presence of ISIS is not that big in Kashmir,” he said, adding desecration of the Masjid’s pulpit was an “effort from IS elements to try and show their presence” in the Valley.