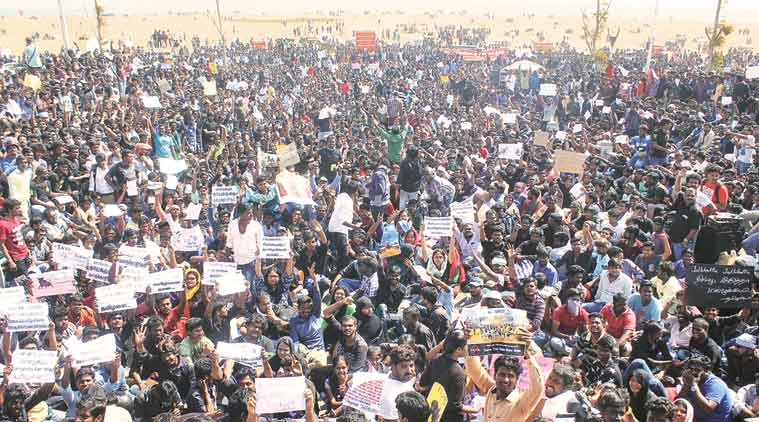 Protestors gathered at Marine Beach in Chennai to demand a lifting on the restrictions on the traditional sport of Jallikattu. Credit: PTI

Chennai: The traditionally peaceful state of Tamil Nadu is on the boil. Since January 17, tens of thousands of college students have been protesting against the ban on conducting Jallikattu (a bull taming sport). The protests began at Marina beach, Chennai and have spread to other cities and regions of the state.

Jallikattu is part of the four day Pongal festival celebrated in January; this year, because of the Supreme Court’s ban and the absence of any remedial move from either the Centre or the state, the sport did not take place.

For the past few days the protestors, said to number almost 30,000, have been sleeping and eating on the beach and their numbers have grown steadily. Dozens of television crews and scores of media persons were also there with local channels continuing their live coverage uninterrupted since the first day. The heavy police presence pushed the protestors on the sands and the service road of the beach. Surprisingly, a large number of women, mainly college students, have also joined the crowds. Protests have spread to other parts of the state and the government has shut down colleges indefinitely asking students to vacate their hostels immediately. Among the protestors on the beach in Chennai are hundreds of IT professionals too.

Jallikattu was banned by the Supreme Court on May 7, 2014 along with rekla racing (bullock cart racing) in Karnataka. A division bench headed by Justice K.S. Radhakrishnan (since retired) in a detailed order struck down the Tamil Nadu Regulation of Jallikattu Act, 2009, which had paved the way for conducting the sport. “Forcing a bull and keeping it in the waiting area and subjecting it to the scorching sun are not for the animal’s well being. Forcing and pulling the animal by a nose rope in to the closed, narrow enclosure called “vaadivasal” (meaning entry point in Tamil), subjecting it to all forms torture, pain and suffering by forcing it to go in the arena and overpowering it in the arena by bull tamers are not for the well being of the animal”, the bench observed.

Following this, there has been no Jallikattu since 2015. But there was an attempt in January 2016 to restart it. The Ministry of Environment and Forests issued a notification which allowed the use of bulls in events like jallikattu. This was challenged by the Animal Welfare Board of India, People for Ethical Treatment of Animals (PETA) and other animal rights activists. On January 12, 2016, the Supreme Court stayed this notification and, after final arguments in December, reserved its final orders. At one stage the court said, “The country cannot import Roman gladiator – type sport as it is against the culture of compassion towards animals. One can use computers for indulging in bull fighting. Why tame bulls for it?”

The students mounted their protests after that. Interestingly, there is no unified command or leadership to gather and lead them. They came from several colleges and institutions. Their anger is palpable. They are not interested in legal details or court judgments. All they want is that jallikattu should be conducted. “We don’t want any explanations. Enough is enough. Why can’t the Central government promulgate an ordinance and conduct jallikattu? When Modi could promulgate a land ordinance again and again, then why can’t he promulgate one for our jallikattu?” asks P. Janaki Devi, a placard-holding college student squatting on the sands.

The general perception among them is that the Centre is not according proper respect to the Tamil’s sentiments. “Prime Minister Modi gave an appointment to Tamil actor Gautami, but he refused to meet 50 AIADMK MPs when they went to meet him last week demanding a solution to jallikattu. In November, when AIADMK MPs went to Modi’s residence to demand his intervention in the issue of constituting a Cauvery Management Board, the same thing happened. Modi refused to meet our MPs and only an officer at the PMO received their petitions. So the Centre has an inherent bias against Tamil Nadu and continues to humiliate us,” says E. Janakiraman, an undergraduate from a city college.

After a short meeting between Chief Minister O. Panneerselvam and Prime Minister Narendra Modi in New Delhi on Thursday morning, the PMO tweeted that it cannot intervene as the matter is being heard by the Supreme Court. Panneerselvam later told media, “We will take a good decision soon”.

Significantly, the protesting students are not allowing any leader of any major political party to come near them. The visit of DMK executive president M.K. Stalin was resisted and he was not encouraged to stay for long at Marina beach. At several places in the state, local MLAs belonging to both the DMK and AIADMK have ben prevented from entering the venues of the protests. The protestors are totally leaderless and this is apparently hampering the efforts of the government to reach a settlement with them.

But how have the protests been sustained? Who is behind them? Some say that the whole agitation has the support of some politicians and even, tacitly, the government.  “We all know how our police work. In Chennai, the police will not allow people to gather at the beach without prior permission and here they were allowed. Initially I thought that the ruling dispensation was doing this to divert the media’s attention from the press conference of Jayalalithaa’s niece Deepa. She was expected to make some big announcement on that day. Then the crowds became too large and now it’s spiralling out of control” says a retired senior intelligence official on condition of anonymity.

“Students belonging to top private institutions are boycotting their classes. These institutions, where the fee is very high, do not allow any indiscipline and misconduct, but the managements have kept quiet despite their students coming out on the streets. It’s common sense to understand that this can’t happen without some sort of tacit blessings from their respective managements” he further says.

Some analysts also feel that the protests are being backed and sustained by opponents of the new chief minister O. Panneerselvam who want to undermine his authority. These elements want to generate animosity against the Centre in general and Modi in particular. “My gut feeling is that those in the ruling party who don’t want Panneerselvam to continue surely have a hand in sustaining these protests,” says a senior AIADMK leader from northern Tamil Nadu who did not wish to be identified.

It is noteworthy that the state’s Dalit population has remained aloof from the protests. “Where were these protestors when in over a dozen places across the state jallikattu was abandoned simply because Dalits were about to take part in the sport? The dominant castes won’t allow bulls reared by Dalits to take part in jallikattu. Nor they will allow Dalits to tame the bulls owned by dominant castes. There were repeated clashes immediately after a Dalit overpowered a bull owned by a dominant caste man” says Vanniarasu, deputy general secretary, Vidhuthalai Chiruthaigal Katchi (VCK), a Dalit party.

“Untouchability is still rampant in jallikattu. Look at the FB postings even today. They are targeted against Dalits. When you can’t democratise jallikattu even in this modern age then why should I oppose the ban?” asks, Jeya Rani, a Chennai based writer and journalist. She is not surprised at the turnout, since she feels the forces behind it have strong networks and infrastructure.

A few analysts are of the view that the failure of the government is the main reason for the present crisis. “In Andhra Pradesh, jallikattu was held in chief minister Chandra Babu Naidu’s village without much of a noise or fuss. In Tamil Nadu, there is a failure of the political leadership to engage with the students who have begun to think that the state’s interests are repeatedly being betrayed by the Centre. There are frustrations on so many fronts and issues like jallikattu are just becoming an outlet for the youth to ventilate their anger,” Ramu Manivannan, professor and head of the department of political science, University of Madras, told The Wire.

With no signs of an early resolution to the issue, normal life is coming to a halt. Schools have announced they will be shut on Friday. Cinema halls in the state will be closed and traders have announced a complete hartal.