From checking criminal backgrounds to leaving no place in the city to legally slaughter chickens, the Jaipur Municipal Corporation seems to be doing all it can to make things difficult for meat sellers. 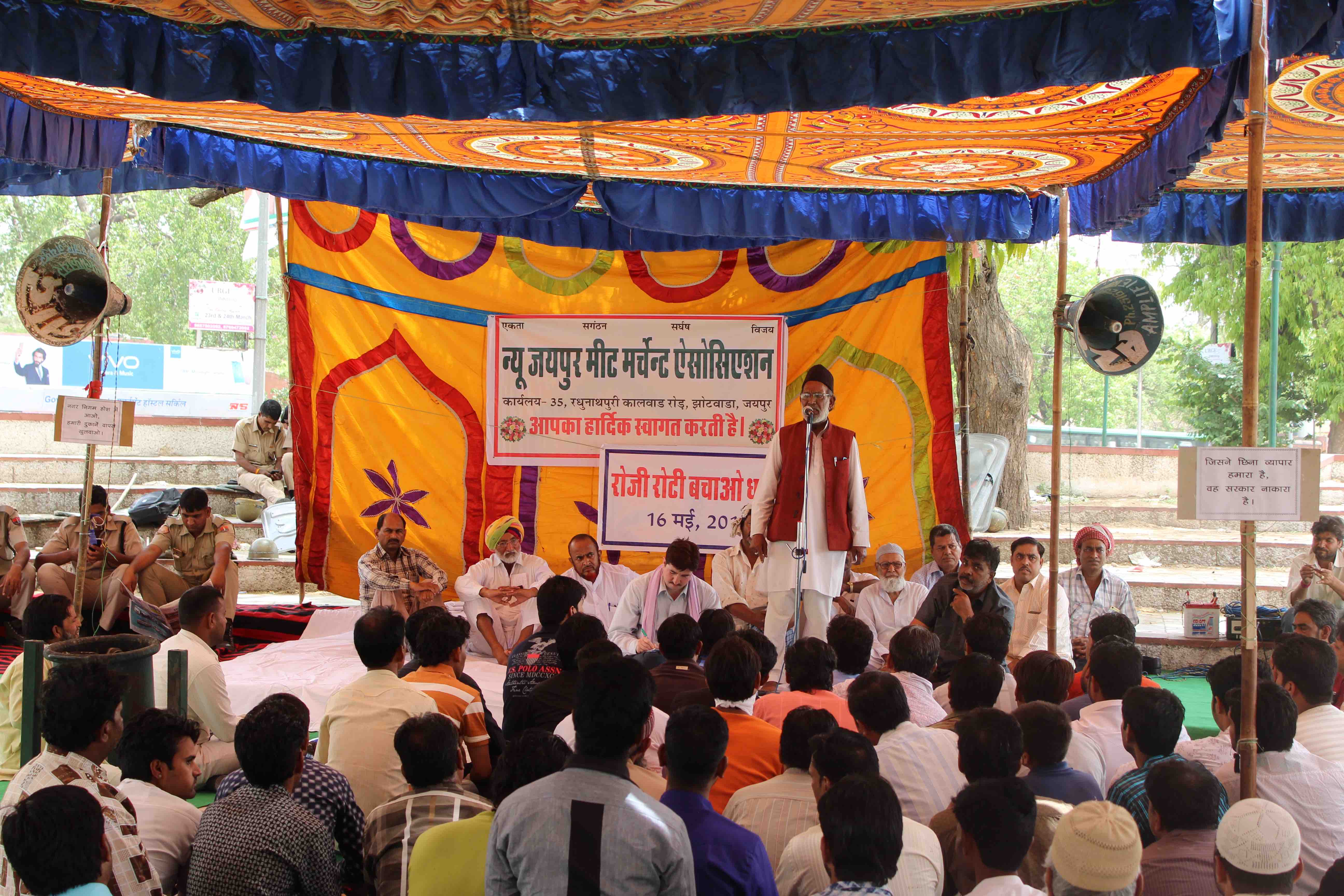 Jaipur: In the last three weeks, the Jaipur Municipal Corporation (JMC) has sealed approximately 100 meat shops in the city. The closures are apparently because these shops had not renewed their licences – but the owners have alleged that the JMC has not issued any licence renewals since 2016.

After spending decades working in the meat business, the owners are confused by the sudden crackdown. “The licences for the year 2016-17 were not issued because a proposal for licence fee increment was under consideration,” Kamlesh Meena, a senior veterinary officer at the JMC, told The Wire.

Meat shop licences issued by the JMC are valid only for one year. “The renewal process takes almost the whole year. We start applying from April and get the renewal in February, just two months before its expiration. The licence should be renewed for at least five years,” said Abdul Rauf Qureshi, president of the New Jaipur Meat Merchants’ Association.

“I was working in my shop as usual when some officials came asking for a licence. This was the first time I had encountered any interference with our business. I showed them the latest licence I had (from 2015) and daily slips from the Chainpura (legal) slaughterhouse. But they wanted only the renewed licence, which nobody has. They started threatening me, saying they will take action using Section 133 and make me close my shop. Our shop is the oldest in the area, it’s almost 50 years old now. My father used to run it and now I take care of it,” said Riyazuddin Qureshi (37), a meat seller in Sindhi colony, Jaipur.

Section 133 of the Code of Criminal Procedure is the “conditional order for removal of nuisance”. “If the conduct of any trade or occupation, or the keeping of any goods or merchandise, is injurious to the health or physical comfort of the community, and that in consequence such trade or occupation should be prohibited or regulated or such goods or merchandise should be removed or the keeping thereof regulated,” the section reads.

However, another meat seller in the area, Mirazuddin (65) has stopped coming to his shop after threats from officials. 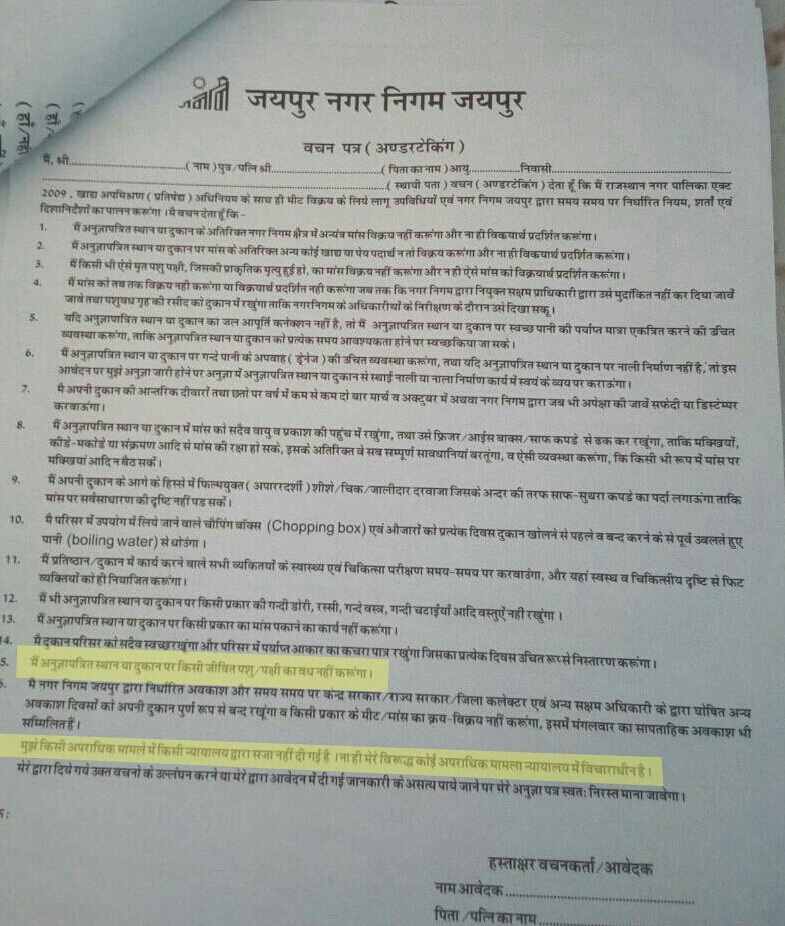 The new licence form issued by the JMC says that the owners must not have any criminal background. It also requires them to submit lease documents for the last 99 years. In addition, the licence fee for meat shops has been raised from Rs 10 to Rs 1,000. “Why are we being questioned about our criminal background? Is every merchant in this country supposed to go through a background check or is it just us?” asks Mohammad Arif, a meat seller from Hassanpura.

“My shop is on rent. Asking the owner for lease papers will mean that he will ask me to vacate the shop straightaway,” added Arif.

The JMC has also barred animal and bird slaughter at meat shops. This has left no place for the meat sellers to slaughter chickens, as the one and only legal slaughterhouse in the city doesn’t have this facility.

When The Wire asked Meena about why these conditions were added for licence renewals, he claimed that they will force meat sellers to carry out their business “legally”, since most sellers don’t use the city corporation’s Chainpura slaughterhouse. However, he accepted that prohibiting chicken slaughter at the shops was a mistake and said this provision will be revoked.

Jaipur’s only legal slaughterhouse is located 25-30 km away from the main city. It also lacks basic amenities like running water and regular garbage collection, and is well connected. It remains open only between 4 am and 8 am.

“The Chainpura slaughterhouse is 30 km from my house. I leave home at 3 am in order to reach on time. In winters, it gets even more difficult for us. A few months ago, one of our colleagues, Mohammad Umar, was bitten by a snake at the slaughterhouse becaue he couldn’t see the snake lying near the animals in the dark,” said Papu Qureshi, who has been a meat seller for 25 years.

“Yes, there is some problem with the water supply in the slaughterhouse, but we are improving on it. It will be done shortly,” said Meena, when asked about these difficulties.

“The city should have at least ten slaughterhouse to accommodate our needs. The JMC must also create a proper, well-maintained garbage disposal system. The Chainpura slaughterhouse is in such a bad condition that nobody can stand there even for a minute. Nobody takes care of the hygiene in the slaughterhouse. It is assumed that since butchers slaughter animals, unhygienic conditions won’t bother them,” added Abdul of the meat sellers’ association.