Why Congress Should Tie up With JAYS, the Adivasi Movement in MP That Began on Facebook

A socio-political movement, Jai Adivasi Yuva Shakti is creating a ripple in the districts of west Madhya Pradesh ahead of the state's assembly elections, and has spurred the dream of creating a leadership of adivasis – for adivasis.

Dr Hiralal Alawa represents the contrarian trend among the beneficiaries of reservation who secure government jobs, join the teeming urban middle class, and sunder their links with the marginal community to which they belong. Few take the trajectory Alawa took – he chose to leave the prestigious All India Institute of Medical Science, Delhi, to return to his home village of Bheslai, in Kukshi tehsil of Dhar district, Madhya Pradesh.

Kukshi has become the epicentre of the Jai Adivasi Yuva Shakti, a socio-political movement, which Alawa spearheads. Popularly known by its acronym JAYS, it began as a Facebook page that Alawa created in 2012. His was an attempt to instill self-respect and pride in tribal youths. It is evident from his explanation to affix Jai to Adivasi Yuva Shakti: “We are treated as animals, yet we do jai-jai [hail] of others. It is time we began praising ourselves.”

His pitch found an instant echo among the educated, either already beneficiaries of reservation or studying to take competitive examinations for entering professional colleges or securing government jobs. Discussions on Facebook gradually widened to include issues such as the skewed nature of development and the pressing need to build a leadership owing allegiance to adivasis than to the national parties.

JAYS acquired ample traction in social media to leap out from the virtual world to land in Madhya Pradesh’s tribal heartland. On May 16, 2013, Alawa convened a panchayat of his Facebook followers in Barwani. Over 3,000 people attended. “The consensus was that our current leaders are failing us – they are not taking up the issues of unemployment, malnutrition, the absence of educational infrastructure, or question the manipulation of our cultural identity,” Alawa recalled.

The success at Barwani inspired Alawa to summon yet another panchayat in October in Indore. The 2013 assembly elections were a month away, and JAYS asked students staying in hostels to turn down politicians whose wont it was to offer them money to campaign for them. “These are the politicians who supply daru [alcohol], murga [chicken], and paisa (money) to adivasis to get their votes. We gave a call to make videos of these illegitimate activities,” Alawa said with a chuckle.

Five years later, JAYS is creating a ripple in the districts of west Madhya Pradesh, where adivasis account for roughly 45% of its population. For instance, adivasis comprise 87% of Jhabua’s population; in Barwani nearly 70%. No wonder its rallies have been quite a draw – for instance, the kisan panchayat it held in Kukshi on October 2 pulled in an estimated lakh of people. The support that JAYS has elicited has spurred the dream of creating a leadership of adivasis – for adivasis. It has prepared a list of 80 constituencies from where it plans to contest in the forthcoming November assembly elections.

Simultaneously, JAYS is in parleys with the Congress for forging an electoral alliance. It has demanded 40 seats for itself, but is willing to settle for less than one-fourth of it – and also contest these on the Congress symbol. It’s a case of tempering exuberance with reality.

JAYS will want to enter the assembly to demonstrate that its representatives are made of different mettle. Yet it hasn’t developed sinews to take on the national parties on its own. But fight it will, either as part of an electoral alliance or alone.

Dr Anand Rai, the prominent whistleblower in the Vyapam scam who has joined JAYS and is counted among its principal strategists, said, “We want to align with the Congress because we too want to fight for secularism and battle corruption, of which the Bharatiya Janata Party is guilty in Madhya Pradesh. Also, we do not have the funds required to fight elections nor are our party structures firmly in place. Yet there is tremendous pressure from our supporters to fight the Assembly elections. Our experience will train us for the future.”

But what is mere experience for JAYS could well turn out ominous for the BJP and the Congress. Political scientist APS Chauhan, of Jiwaji University, Gwalior, pointed out, “JAYS and Gondwana Ganatantra Party [another tribal outfit] are like unguided missiles – you just can’t tell which party they might hit.” Likewise, Yatindra Singh Sisodia, director, Madhya Pradesh Institute of Social Science Research, Ujjain, said, “JAYS could well play a decisive role in determining who wins and who doesn’t in as many as 28 assemblies constituencies.”

JAYS has harnessed the virtual world’s tools to bring together an articulate segment among adivasis to froth and fume at the incessant exploitation by those in whom they reposed their faith and hope.

In a way then, JAYS is the adivasi version of #MeToo and last year’s Not In My Name, both of which the middle class elite in metros initiated as social media campaigns that eventually spilled out in the real world.  JAYS represents the imagination of the adivasi middle class that reservation has spawned. Like the better known social media campaigners, JAYS has harnessed the virtual world’s tools to bring together an articulate segment among adivasis to froth and fume at the incessant exploitation by those in whom they reposed their faith and hope.

Unlike #MeToo and Not In My Name campaigners, though, JAYS’ appeal is far wider because it quickly created structures to bring under its umbrella the aspiring adivasi youth wishing to become middle class. It is these students who go to their villages to explain to the elderly why they should support JAYS. There is also a cultural perspective to their rage and activism. “Education and jobs through reservation do lead to assimilation. But it can also lead to an acute awareness of threats to a group’s cultural identity and the need to preserve it,” Sisodia said.

The search for identity

Anxieties over identity are triggered through a complicated process. Born to a school teacher and anganwadi worker, Alawa experienced the stings of stigmatisation when he left home to join a high school in Susari village, where he stayed in hostel. He and other tribal children were derided for their inability to speak Hindi flawlessly. “They used to call us adibasis, not adivasis. The word adivasi means dwellers from ancient times. On the other hand, basi means stale as in basi food,” Alawa reminisced.

In 2001, Alawa shifted to Indore to join one of its coaching shops. The glitz and shine of urban India provided him a frame of reference to feel anguished at the deplorable, exploitative conditions in which his community languished in. After completing his MBBS in Rewa and MD from Gwalior, which was where he adopted the identity of Jai Adivasi Yuva Shakti for his Facebook posts, Alawa shifted to Delhi, where he did three years of senior residency in AIIMS. He was contracted for a year as assistant professor in rheumatology. “Though the contract ended in December 2016, it could have been extended. But I decided to return to Madhya Pradesh.”

The decision to leave Delhi was largely because the city only deepened his anguish at the plight of his people. Alawa evoked the imagery of speed to explain the difference between the India he had come out from to reside in the India where he worked. “In Delhi, life is hellishly hectic; people don’t have time to spare. In adivasi villages, life is slow; people play cards to kill time,” Alawa said.

The slowness of life back home was symptomatic of a deeper malaise – the lack of agency advisasis have in determining the kind of existence they should have. It was to win back for his people the right to imagine their own world that Alawa began to organise panchayats far more frequently on his return to Madhya Pradesh than what he used to from distant Delhi.

One such panchayat impressed Rai to no end. Having already met Alawa after reading a media account of him, Rai decided to join JAYS, which embraced him enthusiastically because of the fame he had acquired for blowing the lid off the Vyapam scam. An OBC, Rai symbolises the attempt of JAYS to widen its adivasi base to include other subaltern groups.

About the panchayat he first attended, Rai said, “There were speakers from outside. There were motivational speeches. The audience was explained the importance of the Fifth Schedule, the provisions of PESA or the Panchayats (Extension to Scheduled Areas) Act, the Forest Rights Act and such like. I felt JAYS could well be the vehicle for change.”

Also read: Is Congress Worried About a Rejuvenated BSP?

Alawa feels most of these Acts, designed for the welfare of Scheduled Tribes, have not been implemented or are infringed with impunity. For instance, the Fifth Schedule provides for a 20-member Tribal Advisory Council to advise the government in states having scheduled areas. Tribal MLAs are to constitute 15 of the 20 members of the Council; the remaining five from civil society representatives.

“The tendency is to appoint all 20 members from the ruling party,” said Alawa. “They agree to whatever the government wants.” The consequence is that the government imposes its own idea of development and welfare on adivasis. For instance, the Madhya Pradesh government constructed pucca houses under the Pradhan Mantri Awas Yojna. These remain unduly hot until late night, compelling people to sleep outside. Toilets have been built in front of dwelling units, leading to these not being used at all.

“Our idea of development is different. It does not mean having ACs and cars,” said Alawa. “Simultaneously, in the name of development, the BJP government has appropriated more land of adivasis in 15 years than what had been done in the previous decades by the Congress.” 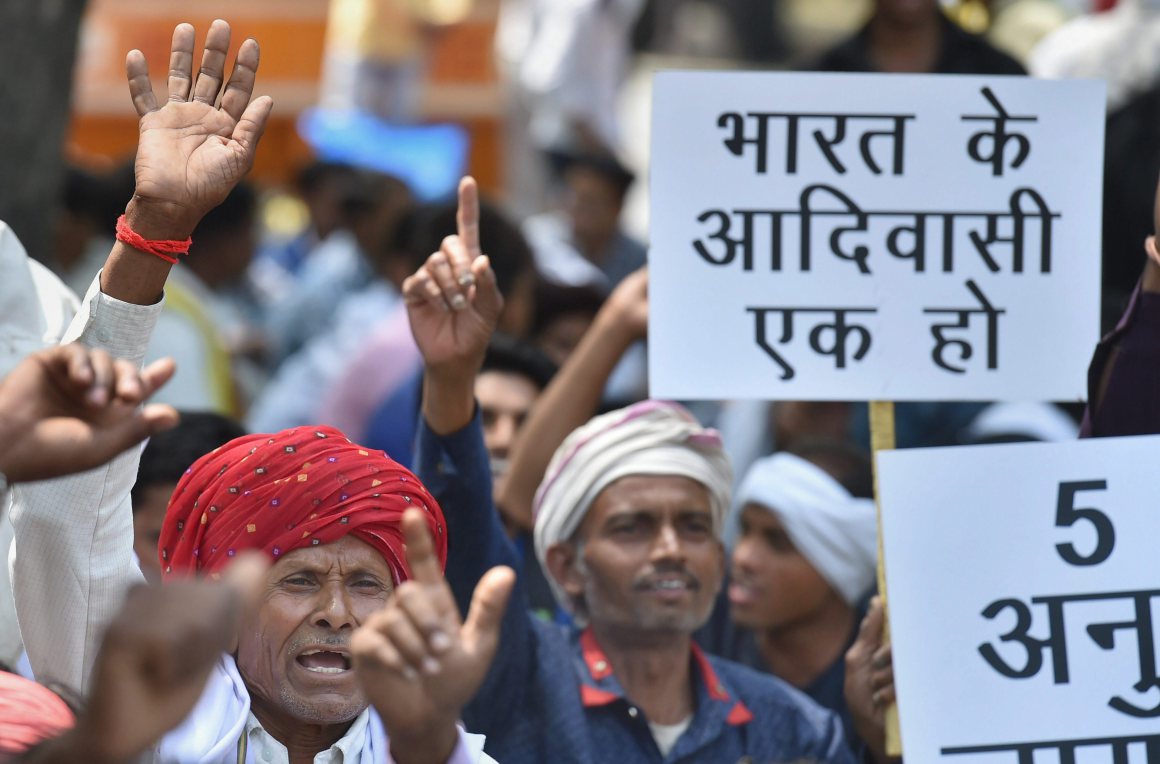 A uniform development model for the entire country homogenises the diversity of lifestyles. This is compounded in tribal areas because of cultural interventions that seek to transform their very being and create the new adivasi. Imitating the strategy of Christian missionaries who are said to have brought education and healthcare to tribal areas for evangelical purposes, the Rashtriya Swayamsevak Sangh has sought to Hinduise the adivasi. “We are opposed to all attempts to change our identity. Without identity, our wajud [presence] will end.”

The attempts to Hinduise adivasis is not confined to the ideational level alone. It is also through the strategy of creating conflicts between Hindus and Muslims. According to Alawa, RSS affiliates trigger communal tension and skirmishes and instigate adivasis to engage in violence. “I have been asking people what harm Muslims have done to them that they want to fight them… Our biggest foe, anyway, is the RSS.”

JAYS gets a thumbs up from Ishrat Ali, who heads the Qazi Council of Madhya Pradesh. “JAYS has re-established the idea of brotherhood in the area. This is a consequence of having an educated leadership. Alawa understands why there is an attempt to replace the flowers of many colours that comprise India’s cultural bouquet with that of one colour.”

There is a structural reason why there is a lowering of communal temperature in west Madhya Pradesh’s tribal belt. “Fact is a lot of adivasis have deserted RSS affiliates to join JAYS. At many places, RSS is unable to hold its shakhas,” Rai said.

In many ways then, JAYS is waging a battle that the Congress should have fought. That alone should be a reason for India’s grand old party to grant a handful of seats to JAYS. It is not just about notching a significant electoral victory before the 2019 Lok Sabha elections, but also about rallying small groups sharing ideological similarities to fight for India’s soul.