Is the Indian Media Failing to Perform a Necessary 'Activist' Role?

Can journalism and activism – usually seen in contradiction to each other – overlap without undermining the objectivity of the journalist? 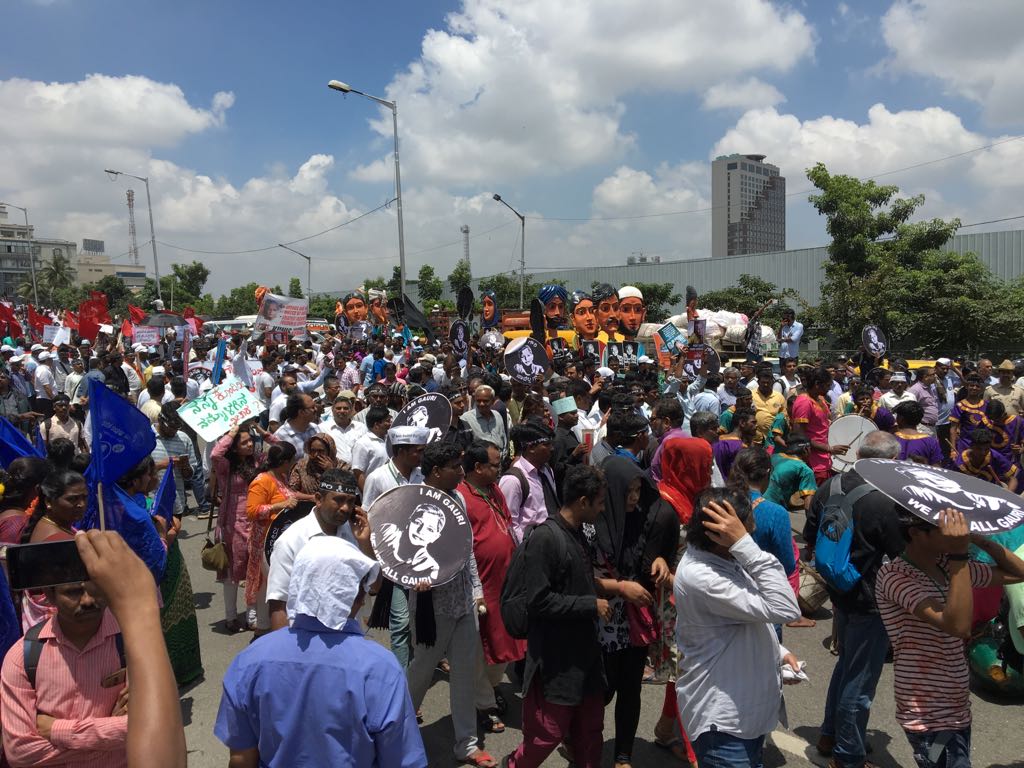 Protest march in Bangalore for Gauri Lankesh on September 12. Credit: The Wire

The assassination of Gauri Lankesh, editor of the Kannada weekly Lankesh Patrike, on September 5, sparked unprecedented protests among journalists across India. Hundreds gathered at Delhi’s Press Club to express outrage over her murder. Many expressed surprise that such large numbers of mediapersons (rarely known for such gestures of dissent) showed up that day. A rare expression of solidarity and anger indeed. Some present on the occasion even emphasised the need to take the protest forward, to make it something more than a one-off. The conversations gestured towards a changed reality, one even those who have so far been reluctant to take cognisance of, were forced to recognise.

No doubt, reporters working with small media networks and away from Delhi’s media glare are more vulnerable than the well-connected journalists in the capital. For instance, earlier this week, 28-year-old Santanu Bhowmik, employed with local cable TV network Din Raat, was brutally murdered while covering a  a violent clash between the Indigenous People’s Front of Tripura (IPFT) and the ruling CPI(M)’s tribal wing Tripura Upajati Ganamukti Parishad in western Tripura’s Mandai area, situated about 25 km from the state capital Agartala. He was fatally attacked with sharp weapons, allegedly by the IPFT members, despite identifying himself as a journalist.

The field of journalism has perhaps never been as fraught as it is today. Over the last decade or so, the number of reporters imprisoned, even killed on the job, has gone up alarmingly. If dangers in the world outside have multiplied and assumed different forms, the newsroom too has been transformed into an embattled space. Labelled “difficult” (a convenient tag attached to editors who exercise critical autonomy), many top editors have been – and are still being – summarily shunted out. This is making the day-to-day running of journalistic enterprises difficult if one doesn’t bend to the will of the powers that be. On the other hand, the emergence and proliferation of online and digital media platforms profoundly impacted the ordinary practice of mainstream journalism. Not only has the fast-changing character of media blurred the distinction between traditional and non-traditional media, conventional distinctions between journalism and activism have also been smudged by blogs and internet journalism.

Also read: If the Indian Media Did Its Job, Gauri Lankesh Wouldn’t Have Been Killed for Doing Hers

Against this complicated background, its pertinent to ask: Who is a journalist today? Can she also be considered an activist in an expanded sense of the term? Can the dual roles, usually seen in contradiction to each other, sometimes overlap without attracting professional flak? Or, is there an inherent conflict in such conflation – a conflict loaded with the potential to undermine objectivity of the journalist, the credibility of her work?

In his book The New Censorship: Inside the Global Battle for Media Freedom, Joel Simon tackles some of these daunting questions, asking:

In an era in which technology has changed everything about the way news is gathered and delivered, is it possible to draw a line between journalism, activism, and other kinds of speech? And is it necessary to do so?

The last question is particularly relevant at a time when many trained journalists are prickly about being labelled an ‘activist’ – activism being viewed primarily as the domain of political parties, non-governmental organisations, and activists frequently dismissed as jholawallas whose ‘job’ is to protest. A different logic appears to guide the profession of journalism. In the interest of doing their job (dispassionate rather than passionate has become a qualifying hallmark), journalists are expected to keep a ‘safe’ distance from activists, not get too involved in the subjects they are reporting about, a dictum that often ends up producing disinterested journalists, sadly lacking in the curiosity and passion to engage fully with the world around them.

Since the 1990s, the world in general, and media in particular, have undergone dramatic mutations. Because, about two decades ago, the traditional media space was not so crowded with journalists of all stripes and technologies of all kinds, it, like the world in general, sometimes appeared to be a safer place.

Contemporary media, like the contemporary world, is a different beast altogether. Contrary to common wisdom in countries like ours, where all hope continues to be pinned on the promise of modernity and economic globalisation, globalisation has spawned a gamut of wars around the world, and intensified fault-lines within countries. The wars in West Asia – largely a legacy of the West’s predatory foreign and economic policies – have triggered a series of never-ending humanitarian crises. It doesn’t take much to suggest that images of wretched women, children, and men – refugees, stateless people, sometimes washed up on the shores of seas, and others huddled in camps or queueing up for food – are among some of the most devastating visual markers of this century. Reporters, tracking these developments across the world have been in the straight of fire of fundamentalists, repressive regimes, armed militants. In many ways, the dangers faced by reporters in the field and civilians under siege are open to comparison today. 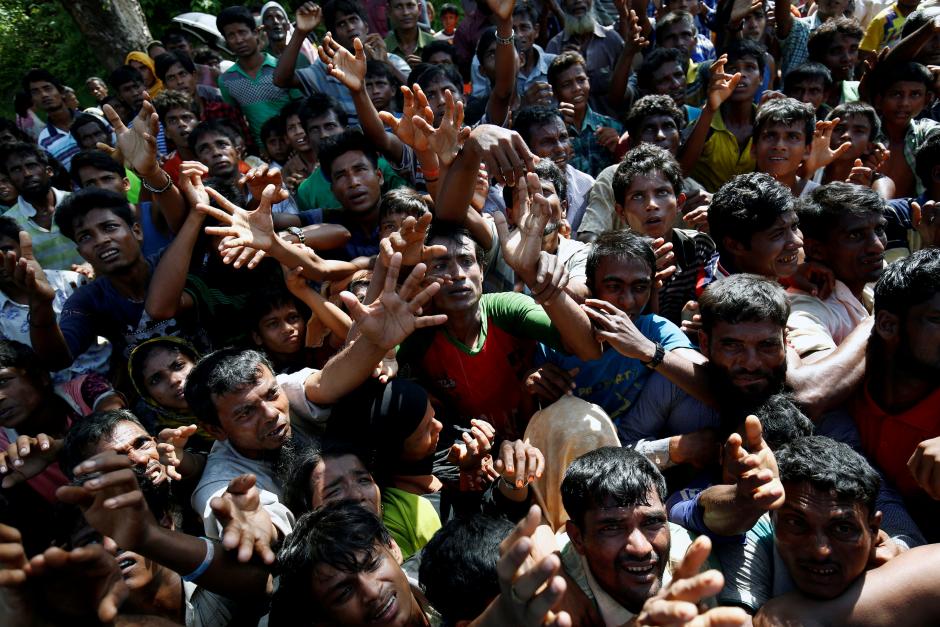 It doesn’t take much to suggest that images of wretched women, children, and men – refugees, stateless people, sometimes washed up on the shores of seas, and others huddled in camps or queueing up for food – are among some of the most devastating visual markers of this century. Credit: Reuters

According to the Committee to Protect Journalists, of a total of 227 journalists were killed worldwide since 2011, more than one-third died in Syria alone, 84 among them local Syrian journalists. Between 2012 and 2014, more than 80 journalists were kidnapped in that country. Physical attacks and threats are not the only occupational hazards confronting journalists. Overall, media autonomy has been under more and more intensified attack across the globe. At home, since the change of guard at the Centre in 2014, dissenters or simply communities practicing a different way of life, are under intense scrutiny. In the US, the media has been at the receiving end of the Donald Trump presidency since it secured power in November 2016.

In India, as in the US, persecution by the government is taking place on two broad levels. On the one hand, there are attacks on dissenting voices within media organisations and occasionally on the organisations themselves. On the other, there are attacks on dissenters in civil society, coupled with the relentless persecution of minorities, leading, slowly, to the normalisation of violence in daily life. Muzzling the media is proving to be far easier in India than in the US, where journalists are fighting back at every opportunity (often to the benefit of their ratings). Is the US media – which is exposing the Trump administration’s repeated missteps, prejudices, and racial biases – then performing an ‘activist’ role? That the US media is not doing ‘objective reporting’ is abundantly clear. This, then, raises a further question: Is the Indian media failing to perform a necessary ‘activist’ role in order to safeguard not just its own right to dissent but also the rights of dissidents at large?

We have moved into a dangerously volatile age where the meanings of terms like ‘activism’ and ‘activist’ need, perhaps, to be redefined. Their implications today go beyond conventional notions of activism: taking to streets, participating in demonstrations. No doubt, there are moments when such participation holds special meaning and is a dire requirement, as, for instance, during the large gathering protesting Lankesh’s murder. But how do we stay at the crease, unwavering and unrelenting, in the face of continued intimidation?

“The question of who is a journalist and who is an activist and whether they can be one and the same continues to roar along, most recently in the instance of Glenn Greenwald’s reporting for The Guardian on the secrets revealed by Edward J. Snowden,” David Carr wrote a few years ago in the New York Times. Indeed, Greenwald’s current organisation, The Intercept, is an excellent example of activist journalism, filled with extensive cutting-edge commentary and in-depth reportage that’s always politically aware and confrontational. In the face of such examples, journalists are usually asked: What about journalistic objectivity? Are journalists ready to sacrifice professional objectivity at the altar of activism?

A New York Times editorial in November 2014 took an uncompromising stand in the matter. The Chinese government was tightening the screws on the paper when it began investigating the wealth amassed by Communist Party leaders’ relatives. The paper responded to the government’s tactics of harassment with an editorial categorically stating that it had “no intention of altering its coverage to meet the demands of any government – be it that of China, the United States or any other nation.” Quoting the editorial, Dan Gilmor, in an article on Wired, wrote: “The writers framed this as a journalism issue: the right of a news organisation to report what its journalists believe is the truth. They were also standing up for a wider freedom: people’s ability to get the information they wanted from the sources they chose…. The Times was making more than a business decision. It was engaging in an overtly political act—and abandoning any pretense of journalistic ‘objectivity.’”

Of course, it doesn’t help matters that such principled positions are often easier to take when the government at the other end is China, and not the US. The media – including the Times’ reporter Judith Miller – played no insignificant part in whipping up sentiments for the war against Iraq in 2003, based on false evidence. Today, as a discussion on Democracy Now pointed out, some sections are doing the same with regard to North Korea.

This brings us to the vexed notion of objectivity, to the question of whether defending not just media autonomy, but larger social, cultural and political rights of citizens as a whole, should be considered part of journalistic ethics. If activism denotes resistance to violence in society at large, defence of rights – whether those pertain to the media or to individuals and communities – then this perhaps is the moment when journalists should consider not being shy of wearing that label anymore.