Is Bihar in For a Surprise With the Surge in Turnout at Opposition Rallies?

That Tejashwi Yadav’s rallies are drawing not just the Muslims and Yadavs, but young Bihari citizens across the board must be seen as the warning signal to the ruling NDA. Given that a large measure of his cool thus far has tended to reside in secure longevity at the top, be it in this camp or that, he seems frazzled at being called out by large sections of the people who are now upfront about counting his failures.

Whoever has watched journalist Ravish Kumar’s extensive and in-depth reportage about life in Bihar in recent times will know that the state continues to be at about the bottom of the pecking order in the matters of education, especially at college and university levels, and in terms of healthcare. Nor have Nitish Kumar’s 15 years in office much to show for in relation to industrial development or in the area of filling up vacant jobs, be they of teachers, doctors, policemen, or many other state services.

A vast number of the unemployed in all categories are thus out in the open, swelling opposition rallies, as are the tens of thousands of migrant labour, whose sufferings through the pandemic have been unconscionable and without redress.

Claims of infrastructure development are coming to be seen for what they are: more shadow than substance. And little known instances of corruption in the matter of so-called building activity have come to the fore: roads that were neither ever built nor repaired have consumed crores on paper. National Highway 80, traversing through the state, maybe an epitome of the realities in this regard.

Scenes of hospital beds afloat in rainwater, with bodies piled on one another come to mind, and population as large as Bihar has received the benefit of some 500 or so ventilators during COVID-19 times. 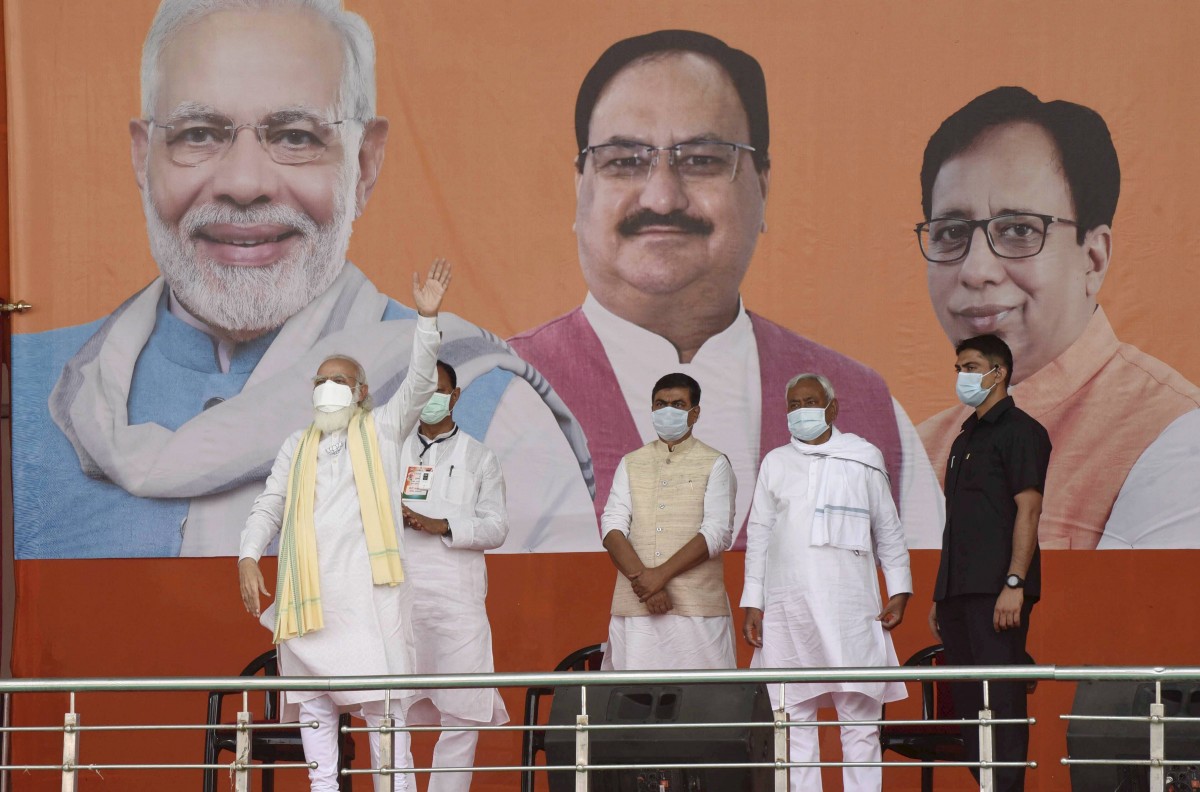 Unable or unwilling to have given the hoi polloi the gift of sound health infrastructure, Bihari citizens are now told they will receive the free vaccine — a  Faustian barter indeed. The unspoken subtext of that offer clearly is “give me your vote and I will give you the free vaccine.” The Shiv Sena has been quick to point out the cynical, craven, and unethical nature of that offer — as though only those who vote for the NDA can be eligible for the bounty of a free vaccine.

That the offer has come from a central minister makes it particularly crass. Whereas, in the richest country in the world, in the United States, Joe Biden believes vaccines, when they are duly cleared, must be available free of cost to all American citizens. But, here in the largest democracy, in India, the offer is made just to an electorate in one state due to vote a new government in.

As for the claim that electric power has been reached far and wide in the state, not one unit of this new electric supply has been generated in Bihar, but bought from elsewhere.

Cannily, the prime minister has chosen to take responsibility only for the last three years or so of the NDA rule in Bihar,  consigning the previous 12 years (of Nitish Kumar’s tenure as chief minister) to contentions with a hostile UPA. Given that logic, all states now run by opposition parties could well claim that their inadequacies ought to be ascribed to the fact that they have had to contend with a hostile NDA rule at the centre.

What makes  Nitish Kumar’s predicament peculiarly pathetic is the fact that opposition to him now comes stridently from both within the NDA and from a determined conglomerate of parties that were not as one before. 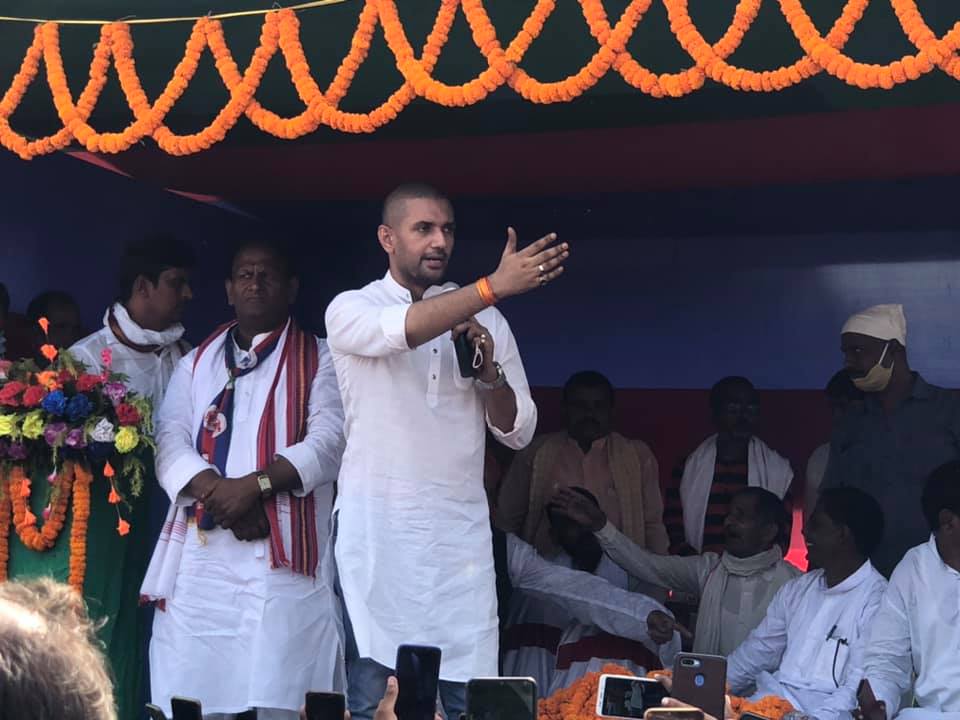 Although true that the LJP has never been formally in alliance with the JD(U), the Chirag Paswan-led revolt is of a new order, that he had walked out of the NDA alliance this time around.

The concerted attack by the Chirag-led LJP on the Nitish party no longer seems a friendly, internal contention, redeemed by courtesy, but a no-holds-barred pogrom to oust the JD(U)  and, in a rather abject cosying to the prime minister, make a bid for the chief ministership.

That the prime minister chose to say laudable things about the late Ram Vilas Paswan at a recent conclave, without making any comment on Chirag’s revolt against Nitish must have seemed the unkindest cut. Nitish Kumar is no political novice, and must have understood that should his party fare poorly at the hustings, a new argument may be found by the ever-pragmatic BJP  to embrace an altered equation within the  NDA. Not that Paswan’s party is poised to garner much more than a double-digit of seats.

If anything, Chirag’s revolt may end up adding handsomely to the BJP count, enabling it to jettison its so-often repeated support to Nitish Kumar’s position as numero uno, and step into the chair all on its own, should its numbers so warrant.

But here is the catch: if reports from the ground and the size and mood of the crowds thronging Tejashwi Yadav’s rallies are anything to go by, Bihar may be departing from a customary voting habit to a new order of assertion. That Tejashwi’s rallies are pulling in not just the Muslims and Yadavs, but young Bihari citizens across the board must be seen as the ominous warning signal to the NDA. Coupled with the booing that Nitish has been receiving in his rallies, where full-throated slogans were raised, lauding Tejashwi and his party, including the absent patron, Lalu Prasad Yadav.

In any other state, such things may have been understood as engineered interventions, but we must never forget that the electorate in Bihar has always been politically more enlightened and better informed than in most parts of India.

That the young and spirited Yadav scion has chosen to pitch his campaign around the issue of employment rather than on considerations of social identity is a masterstroke of sorts. Together with the fact that he has been able to back the resolve to fill up some 10 lakh vacant jobs from the money that, it turns out, is to an extent of some 40% of the budget (a contention not contradicted by the NDA) never spent by the Bihar government, it lends concrete credence to that resolve. All that, apart from the sums that according to him have gone down the drain in corrupt crony deals of one kind or another.

Taken together with the other commitment to waive off farm loans, what the  RJD-combine is offering seems pat to the objective requirements of vast segments of the population in Bihar.

If, therefore, the current contest is as close as a recent CSDS-Lokniti poll has shown, the NDA has everything to worry about.

Indeed, it may so happen that a vote transfer takes place from smaller groupings, should it seem to them that the RJD-gathbandan has a likely shot at power.

That the prime minister’s reference to the reading down of Article 370 and the concomitant Hindutva-related dog-whistles have shown negligible traction with the articulate masses testifies to the success of the momentum that especially Tejashwi has been able to generate in opposition to the sectarian campaigning by the NDA.

The fact that in the previous contests the Nitish-led NDA was able to garner a sizeable number of minority votes, as well as the favour of women voters, but no longer so, must add to the woes of the ruling dispensation. If migrant workers have had a life-changing experience through the pandemic, the women of Bihar have been reporting the horrendous consequences of the prohibition policy for their domestic lives.

And sections of the urban, upper-caste middle class who may have tended to favour an anti-minority agenda seem now distinctly far more anxious about employment-related concerns — a shift visible in the character of the crowds who have thus far flocked to Tejashwi’s rallies. The likely fruits thus of a traditional caste-based allegiance seem to have dwindled to the detriment of the NDA.

The fallout of Bihar elections

Should the NDA actually come a cropper in Bihar, the results may inaugurate and embolden a shift away from the mere personal clout of the prime minister in other elections to come, since the issues that have come to the fore in the ongoing Bihar campaign also afflict all other populations elsewhere.

Such a movement away from a homogenised, unitary politics of the last six years could firm up federal aspirations in states that continue to be ruled by non-NDA political forces, lending muscle to pending issues that now seem hopeless without any countrywide back-up. For one, such an eventuality may make people’s protests less amenable to strong-arm suppressions, obliging both the state-apparatus and the judiciary to draw new insights about the state of the republic.

It will not be the first time in India’s modern history that Bihar shows the way.