Is AAP Set to Replace the Congress as India’s National Opposition?

With a charismatic leader, an ‘alternative governance’ model and an understanding of electioneering in the online age, AAP seems geared to replace the Congress as India’s primary opposition. 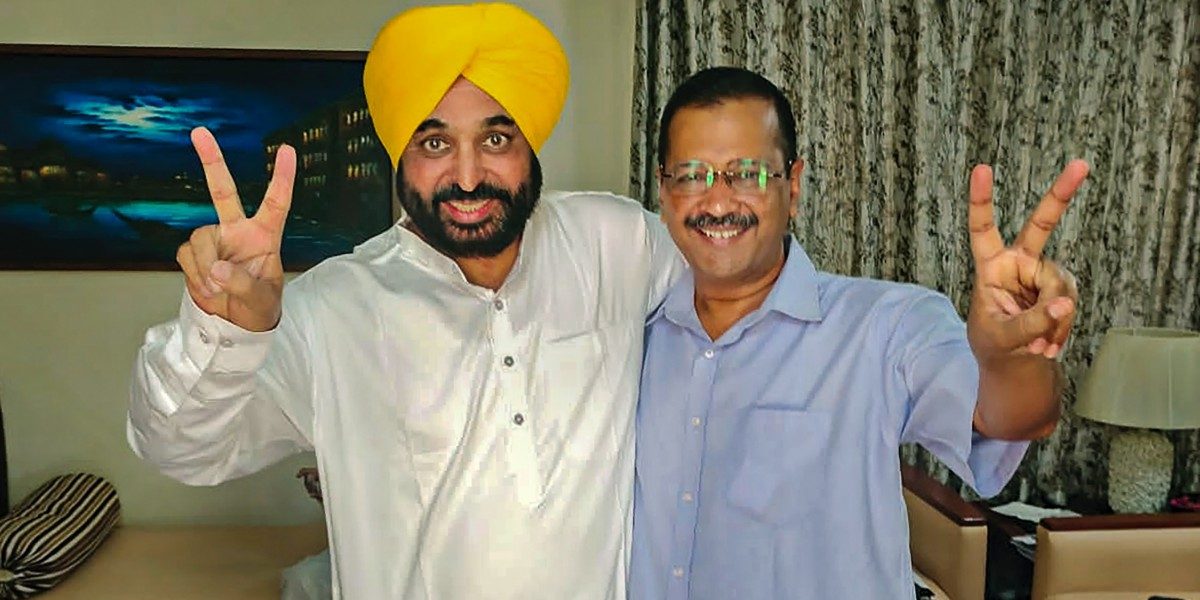 A landslide victory in Punjab has propelled the Aam Aadmi Party (AAP) from being a party ruling a ‘glorified municipality’ to becoming only the fifth Indian party to have succeeded in expanding beyond its state of origin and winning another state. The AAP now rules two states, as many as the Congress.

With Congress staring at an existential crisis after the dismal electoral record of winning only five of the 50 state assemblies up for grabs since 2014 and being routed in two consecutive national elections, the success of the AAP in sweeping yet another state has made mainstream the whispers that the AAP is the possible ‘national and natural replacement for the Congress’ .

As the AAP snaps at the Congress’s heels in Gujarat, Himachal Pradesh, Karnataka and beyond, here are five reasons why the party may well replace the Congress as India’s national opposition.

The Indian state, despite its stability, has lagged in delivering economic growth and jobs, reducing hunger, malnutrition and poverty and has seemingly surrendered on providing healthcare and education, ensuring urban governance, gender parity and reduced social stratification, and the like.

Such failures provide extraordinary scope for reforms that address these critical problems and thereby create new voter bases for a party.

Yet, the existing parties, especially the Congress, failed to offer an alternative paradigm. As such, we, the people, settled for the familiar trope of being ‘too populous to be well governed’. A sense of hopeless status quo-ism and a lack of imagination pervaded our approach to most public policy problems.

A Bharatiya Janata Party (BJP) government is hardly distinguishable from a Congress government, especially in states, as famously quipped by the ever quotable Arun Shourie. “The BJP is Congress plus cow,” he had said.

Congress has become a prisoner of its own legacy, defending archaic structures and laws, unable to free itself from outdated approaches to governance. It remains convinced in its sense of entitlement and seems content to just wait its turn as the opposition, to be voted into power because of eventual anti-incumbency. This entitlement and complacency is why the Congress has no marketable model of governance for states, unlike the AAP’s Delhi model and the BJP’s Gujarat model.

In such a vacuum, the AAP offers an alternate form of governance which reduces the cost of living and increases the disposable incomes of common folk through innovations in welfarism; enhances opportunities for upliftment and dignified existence for the deprived through reformed public healthcare and education systems; improves services delivery through the use of technology and updated delivery structures, like the doorstep delivery of services and provisions for universal water supply and sewage network access.

Through these steps, the party has astutely identified the unaddressed needs of voters, challenged itself to fulfil them and has thereby created a durable voter base that transcends old voter blocks. It is this durable base that explains why the AAP, after finding its feet in a state, sweeps it and may thus best the Congress in other states too.

Solves the riddle of the BJP’s ‘Hindutva’ and nationalist appeal

The BJP’s success under Modi versus the Congress has been underscored by party’s success in defining the Congress as ‘anti-Hindu’ and ‘anti-national’, thereby making the Congress a pariah for a significant section of voters. The BJP keeps these voters consolidated by constantly stirring the cultural and social pot and appropriating the mantle of ‘protector of national and Hindu interest’. As a result of the emotive appeal of Hindutva and nationalism, the BJP has created a bond with voters which has grown immune to failures of governance.

The AAP has successfully navigated this minefield with harmless symbolism, such as temple visits, one crore honorariums for martyrs, tiranga yatras and the Teerth Yatra yojana. It has also carefully avoided getting entangled in the cultural and religious debates that keep the focus of the polity on cultural differences instead of governance issues.

While the AAP has caught a lot of flack for pandering to the people’s emotive needs through the kind of religious and nationalistic symbolism that the BJP also uses, such criticisms neglect how a fractured polity, where society has become polarised on such divisive issues, is not fit to settle such debates. If anything, such contestations only prevent us from focusing on the things that unify us and leave the liberals alienated from a significant section of voters.

Thus, the AAP has struck a balance where those Hindus who feel alienated are brought back to the liberal fold by having their sentiments acknowledged and respected publicly, neutralising the sense of victimhood that the BJP has carefully nursed amongst Hindus and thereby allowing the elections to be fought on issues of governance.

The AAP wins another point against the Congress when comparing the appeal of their leaders; Arvind Kejriwal versus Rahul Gandhi.

Gandhi has not been in any position of governance and is unable to inspire confidence in the voters regarding his ability to govern, whereas Kejriwal has been a chief minister thrice and has been re-elected on the basis of his governance record.

Kejriwal is also a much more potent organisation builder and a more convincing public speaker. Further, Gandhi has been systematically demonised and, therefore, is widely perceived as the incompetent representative of a falling corrupt dynasty responsible for the corruption and nepotism that frustrated the common man’s aspirations, creating a sense amongst voters of a lack of alternatives to Modi.

In contrast, Kejriwal is perceived as a self-made man who cleared both the IIT and civil services entrance exams; won a Magsaysay award for social services; and is a renowned anti-corruption crusader. This makes him better placed to emerge as an opposition face behind whom the public can unite and credibly challenge Modi.

In the contest for national opposition space, the AAP has another ace up its sleeve –its mastery of new age electioneering.

The AAP has a domineering presence on various social media platforms; ostensibly has a better understanding of the search algorithms; has more passionate online volunteers; and has innovative multi-media messaging which allows it to disproportionately set the online – and thereafter, offline – narrative; a task the Congress often finds itself struggling at.

In fact, the Congress, the original ‘godfather’ of welfare politics and the party behind India’s 1991 reforms, is unable to claim ownership for either when compared with the BJP due to the latter’s superior narrative building.

A battle-ready party with a mission

The Congress is manned by demoralised, uninspired leaders and volunteers who are out of sync with the people’s expectations. The party has grown poorer despite its leaders enriching themselves. It has failed to attract new talent while its own leaders dump it to float their own parties or join its rivals.

In contrast, the AAP has an army of young, loyal, dedicated volunteers, with an abiding belief in the mission of the party. This helps it create a buzz and win the perception battle.

The rise of the AAP has not been without its share of hiccups. It was left for dead after the 2014 Lok sabha debacle, then again after the disappointing results in the 2017 assembly elections in Punjab and finally, after the 2019 Lok Sabha wash out where it won just one seat. Yet, because of an indomitable fighting spirit, the AAP has risen like a Phoenix from the ashes after every defeat

Pushed against the wall, it reinvents itself, appeals to a new voter base, throws in all its might and outflanks it’s more well-resourced rivals in perception battles, without being intimidated or shouted down.

This fighting spirit is ultimately what may help the AAP unseat the squabbling, exhausted, worn out and decaying Congress which often dies down in states where its pushed to the third position. And it’s this fighting spirit which may make the BJP wary of AAP’s emergence as its lead rival, ending its dream run of easy walkovers over the Congress.

With the loud AAP at its forefront, the opposition may finally find its voice, a proposition that should only endear the AAP to opposition voters more still.