Was the impassioned focus on Sharmila's electoral fate merely to delude ourselves that we are also concerned about Manipur and not just the numerically important ‘mainland states’? 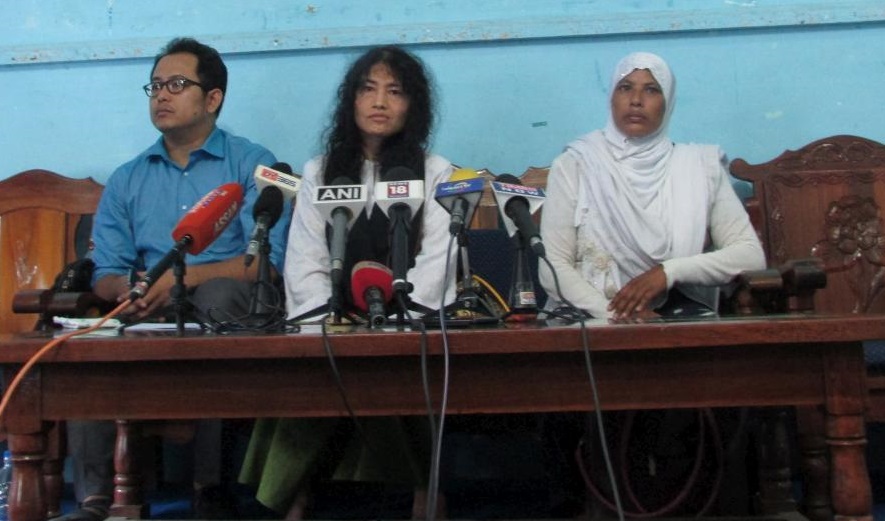 Irom Sharmila Chanu‘s followers outside Manipur, including many in the media, reacted to her abject failure in her first, and it seems last, foray into electoral politics with emotions ranging from disappointment to shock. There was a genuine sense of puzzlement. How could she lose and lose so badly – she got 90 out of 27,271 votes.

But some of her self-professed followers expressed disappointment in and even berated the citizens of Manipur for not having elected her despite her years of sacrifice. Some wondered if Sharmila’s loss implied the people of Manipur did not care one way or the other about Armed Forces Special Powers Act (AFSPA). Others conflated her loss with the emerging politics of ‘mainland’ India and expressed apprehensions at large.

Some of this thinking is plain lazy. Its loaded with ignorance. The rest is downright condescending. Most astute political observers from Manipur had little expectation from Sharmila as an assembly candidate to begin with. To most in Manipur, her winning the election would have been the shock, not her loss.

Was the impassioned focus on Sharmila’s electoral fate then merely to delude ourselves that we are also concerned about Manipur and not just the numerically important ‘mainland states’? Did we track her only to help glaze over the more sordid and longer story about Manipur’s location within the nation? A tale that needed more homework to stitch together. A story that would end up interrogating our social contract with Manipur more than the voting by people of Manipur. A story that would take us beyond the immediacy of Narendra Modi’s grand ascendance to the permanence of our sordid relation with the northeast states at large. I suggest to you dear reader, this was our case.

We got served the image of Sharmila as a less bitter, more palatable icon of the change that Manipur yearns for. We lapped it up. Surely Sharmila as an individual presented hope to several in Manipur as well. But as a politician, she could not convince the people of Manipur that an assembly election can change the nature of the state itself. Perhaps an assembly election cannot, the people of Manipur believed, and we would did not want to hear that story.

The post-result narrative of reportage on Manipur had three broad strokes. Okram Ibobi Singh had survived, the BJP had emerged the second largest party and Sharmila had ‘shamefully’ been defeated. The adjective was used for only the last of the three events.

Following the story of a globally iconised, sacrificing, peaceful lone warrior Sharmila helped many of us pretend to be engaged with Manipur’s elections. The citizens of Thoubal yoked that pretention away from us by giving her a mere 90 votes and electing Congress satrap Ibobi rather emphatically.

Having suddenly broken her 16-year fast, without keeping most of her close allies within the (already withering away) civil society support in loop, months before elections, Sharmila decided to join the electoral fray. Her decision was hers to make. But if it had taken a lot (and many others) to build an icon out of a fasting Sharmila, it would take much more to build a politician out of her after fasting.

In a state where clan and family relations can and do often trump political affiliations (flipping parties is not such a big deal, remember), she decided to fight from outside her locality and, worse still, fight the incumbent three time chief minister Ibobi in his constituency. Of all those who grudge Ibobi for what he has led Manipur to, and there is a lot to grudge, most acknowledge that like any old satrap he has kept his constituency pampered. The parallel one can draw is of a Sharad Pawar in Maharashtra.

To give another parallel of an activist-turned-politician, look at the less-than-fair example of Arvind Kejriwal. When he made the decisive call away from civil society activism, Kejriwal left almost all of his erstwhile civil society compatriots aside. He built his team and his cadre of mohalla-level workers. He engineered a complete political movement. He did not demand that his years of working on Right to Information be awarded.

Sharmila, on the other hand, shunned most her past allies and many of them were disappointed with her innate individualism. She did not actively seek a new team of political workers. Being Sharmila, the beacon of fresh, she got some self-driven youth support anyway. Her newly-crafted political outfit, Peoples’ Resurgence and Justice Alliance sought to put up merely three candidates, including her. Erendro Leichombam, her party’s 33-year-old Harvard-educated convenor, when asked what were the party’s core concerns, said, unemployment, corruption, AFSPA and divisive politics. He was quoted saying it in that order and the order counts. Clearly, even as he shared Sharmila’s idealism, even he was politically more astute than his leader in reading Manipur.

The historically-deprived communities from sparsely-populated hills of Manipur hold 20 seats in the assembly. The community in the densely packed valley, surrounded by the hills, holds 40 seats. Against this political division of geography and resources along ethnic lines, the hills seek greater economic and political space. With the size of the economic and resource pool remaining stagnant the valley feels claustrophobic. The hills ask for political freedom from the valley to different degrees and the valley clamours for ‘integrity of Manipur’.

Some outside the state might like to believe that the chronic corruption and undercurrent of violence-induced anarchy is an aberration. Most exhausted citizens in Manipur believe it’s the nature and part of the state by now – a stratagem that includes periodically stoking the fire under Manipur’s ethnic cauldron. Many underground groups can also be considered as part of such a state.

Some outside Manipur may marvel at the relatively better situation of the women in society, but most in Manipur would know the steel wall of patriarchy keeps the apparently powerful women civil society leaders from becoming full-time political party players.

Then, there is the politician-contractor economy that the Union government has fostered in the region since perpetuity, creating an elite that helps occasionally release the pressure from the cooker of a militarised society. AFSPA is just another tool for this ‘management’.

Ibobi, a Meitei from the valley, is one the most successful practitioner from the Congress stable of this art form in the region. So, true to his craft, Ibobi began his election campaign months ago along the same lines– much to the disadvantage of BJP at Centre which had sold up a fuzzy framework agreement with Naga communities from the hills. When a blockade of the valley by groups of the hill communities ensued, Ibobi had little political reason to resolve it and instead stood to gain from prolonging pain.

BJP tried for nothing new. It only tried to beat Ibobi at his game and win using the weight of Ibobi’s incumbency against him. It could not alienate the valley or its allies in the hills, it needed to merely tantalise and tempt all that it could do somewhat better than Ibobi for Manipur once in power both at the state and the Centre.

For BJP the northeast states hold the potential of partly compensating the potential losses it may suffer in a saturated north India during 2019 parliamentary elections. It has been working to get a grip on northeast politics since coming to power at the Centre (remember Arunachal Pradesh recently). It assessed the lack of any real opposition, a general frustration against 15 years of Ibobi’s rule, and a second generation of leaders looking to step out of Ibobi’s shadow. It made no grand commitment to building a party from a fresh base. Instead, it built the party’s substratum by clobbering together anti-Ibobi leaders. It did not imagine a new politics. It worked with the acceptance that a fluid and engaged relationship exists between the armed forces, the underground groups, the civil society and the political class.

A game of chess ensued between the BJP at the Centre and Ibobi, as each tried to outwit the other in stoking the ethnic strains between the communities in the hill and that in the valley. By creating seven districts that would potentially wedge the hill communities and consolidated the valley community, Ibobi played a master stroke. BJP sharpened its attack on Ibobi even when its local leadership felt shy of hitting out hard at the satrap.

The elections became about ethnic insecurity. Yet again. The larger game turning into a set piece, people continued to look for what everyone does from assembly elections which hold no promise of a real change – scraping for the near and immediate out of the individual constituency’s dynamics. In a state devoid of other opportunities, this could be a promise of a secure government job, or maybe a pending medical treatment and of course the most instantaneous deliverable – some cash.

Did the people act pragmatically? Did they know better than Sharmila that, yet again, changing a party in power does not hold the potential of changing the nature of the state itself and that a few good-hearted mavericks will not alter that reality? The political jostling post-results proves this was an assembly election to maintain status quo, albeit a febrile and corroding one. It also proves that large sections of media may have misread elections in Uttar Pradesh but we did not even invest in reading the one in Manipur.

Perhaps, we did not even do justice to Sharmila, a maverick citizen, who provoked by circumstances, once sat on a fast and her resoluteness over years moulded an icon of peaceful protest. The icon wished to step down the pedestal to become a ‘private citizen’ and then she instead became a politician – another public persona – seemingly on an impulse. When the citizens decided a maverick politician would not do, she played as much to her character and decided, as seemingly impulsive, to become a private citizen yet again, making out her political foray to be a misadventure.

Each decision of Sharmila’s public life can be critiqued with more nuance without diminishing her as the private individual who gave up 16 year of her life for the right cause.