It Is Time IPS Officers Stood Up to the Political Machinery

None of the police chiefs in the history of independent India have stood up to their political masters. None have sacrificed their career and post-retirement avenues to uphold their professional ethos. It is time this changes.

UP policewoman Shrestha Thakur stood up against BJP workers but was soon transferred to another district. Credit: YouTube 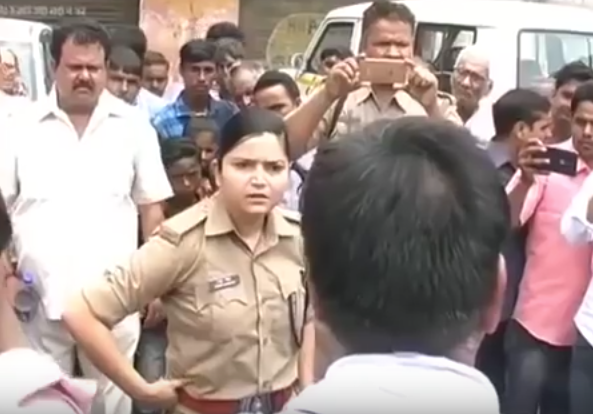 UP policewoman Shrestha Thakur stood up against BJP workers but was soon transferred to another district. Credit: YouTube

Shrestha Thakur, deputy superintendent of Uttar Pradesh police, became famous recently when a video of her standing up to BJP workers went viral. The 2012 batch officer, with professional maturity that betrays her age and personal ethics that demand adoration, will work under many IPS officers till her retirement. The way things are today, most of them will turn out to be spineless. No questions asked, no answers given.

The IPS world is a weird place. Most of its inhabitants have a strong sense of entitlement and a crippling understanding of accountability.

They say they are only 4,000 in a country of 1.3 billion people. They say the failure, real or imaginary, to establish the rule of law is not theirs. They say the incidents of mob-driven communal violence are not new to India. They say these incidents are neither planned nor predictable and also not entirely preventable. They say the police machinery is not always complicit; sometimes it is simply ineffective or incompetent. They say what is needed is thoughtful policy-making, not outrage and breast-beating.

I disagree. Completely. In principle. With proof. Without spleen.

The facts on the ground don’t validate the feelings of the baton-wielding bada khana-loving darbar-obsessed police leaders.

The policing architecture in India has become an unmanageable top-heavy structure that is in dire need of restructuring. All across the country, police headquarters have not been able to find productive work for hundreds of senior IPS officers at the director general, additional director general and inspector general ranks. There are too many generals and there are too many generalists. Specialisation is not a virtue in the IPS world, unless cultivating the political masters of the day is considered as a specialist job. At the bottom of the hierarchy, hundreds of young and dynamic IPS officers are rotting without field postings and stable two-year tenures because their police chiefs don’t have the spine to withstand political pressure to keep them away from any meaningful employment. It pays to be pliant and pliable. The young officers don’t understand this yet. This is what youth does to the young. Their senior colleagues understood this long ago. That is what experience does to the old. So the “4000 IPS officers for 1.3 billion people” argument is empty rhetoric.

Failure to establish the rule of law

Who was responsible for the protection of the citizens in Delhi during the 1984 massacre? The official death toll was 2,733. The police facilitated the massacre by driving the Sikhs out of a Gurudwara and leaving them at the mercy of a mob led by a local Congress party leader, according to the officially recorded testimonies of survivors. In several places, the police had even disarmed the Sikhs before the mob took over. The collusion was so pervasive that it took over 36 hours for the Block 32 of Trilokpuri massacre to come to light, although it was barely ten kilometers from the Delhi police headquarters. The chief of the Delhi police and the police leaders during the 1984 incident were all members of the IPS. Only one officer, Maxwell Pereira, stood up for the Sikhs and proved his mettle as a police leader. The rest of the top brass bowed to the party in power and grounded the police machinery to an administrative halt.

Who was responsible for the protection of the citizens in Gujarat during 2002 massacre? The riots resulted in the deaths of 790 Muslims and 254 Hindus; 2,500 people were injured non-fatally and 223 more were reported missing. When the entire police hierarchy fiddled with their paperweights in their air-conditioned offices, only two IPS officers, Rahul Sharma and R.B. Sreekumar, performed their constitution-mandated duty. Sharma showed the criminal mobs what a police leader worth his salt could do in a crisis. He ruffled the feathers of his superiors during his short tenure. His seniors were rattled because Sharma, in his line of duty, had opened fire on a Hindu mob that was on its way to attack a madrassa in Bhavnagar town. Sreekumar, as the police intelligence chief of the state, was the first whistleblower.

If 1984 Delhi and 2002 Gujarat can’t trouble the conscience of the IPS, then this roll of dishonour should do.

When these killings took place, the police chiefs of these states were members of the IPS. They were not only incompetent and ineffective, they also failed to prove their worth as custodians of the rule of law. None of the incompetent and ineffective IPS officers have been made to pay a price for their commissions and omissions. This is how the IPS world works. Lack of accountability is a given.

Year after year, state after state, community after disadvantaged community, hundreds of people can’t get killed in recurrent episodes of mob frenzy spread over several days without the active connivance of the police leadership. The violence in Delhi in 1984 is not an exception. Nor is 1987 Hashimpura. Nor is 2002 Gujarat. A Maxwell Pereira here and a Rahul Sharma there are exceptions. They are not the rule.

None of the police chiefs in the history of independent India have stood up to their political masters. None of them have sacrificed their career and post-retirement avenues to uphold their professional ethos. Invoking the National Safety Act for bovine smuggling is easy; protecting a young colleague from the political bullies is difficult.

This needs to change. This must change. It is time. It is time for the police chiefs in this country to stop marking time and start making their presence felt. India’s apex court gave a historic judgement in April this year. “There is a difference in the role of the chief secretary as the chief executive of the state and the DGP of a state – their roles cannot be equated. While the chief secretary can be removed if he or she does not enjoy the confidence of the chief minister or does not have a complete rapport and understanding with the CM, the removal cannot be questioned unless there is a violation of some statutory or constitutional provision. But that is not so with the state police chief.”

There is no eleventh commandment that says police chiefs should behave like passengers and that robust policymaking can turn spineless police chiefs into true leaders. The IPS world needs to remember this. Golf and PowerPoint presentations can wait.

Today it is Shrestha Thakur. Tomorrow, it will be another upright police officer.

Basant Rath is 2000-batch Indian Police Service officer who belongs to the Jammu and Kashmir cadre.