The political messaging was akin to his emotive election speeches, rather than including any concrete evidence to counter the opposition’s allegations against his government. 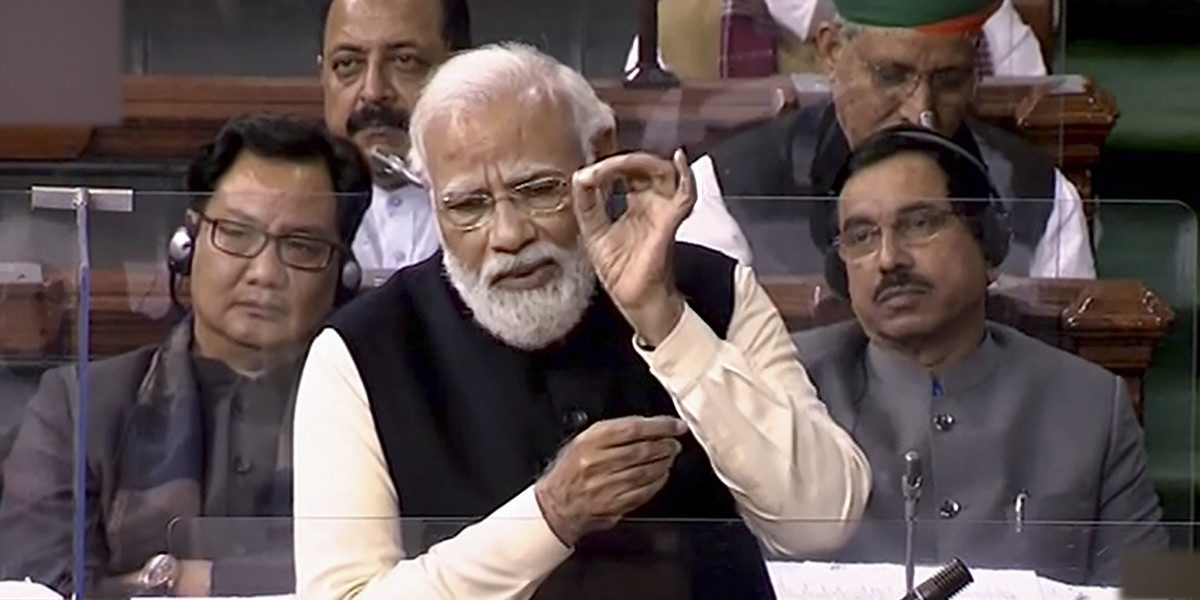 New Delhi: In his over 1.5-hour reply to the debate on the motion of thanks to the president’s address on Monday, Prime Minister Narendra Modi lashed out at the opposition ranks, in what appeared to be his answer to critics for consistently raising issues such as the high inflation rate, unprecedented unemployment and alleged mismanagement of the pandemic.

However, his speech contained more blame-shifting, tongue-in-cheek attacks on the Congress and previous governments it steered. The political messaging was akin to his emotive election speeches, rather than including any concrete evidence to counter the opposition’s allegations against his government.

A point-by-point reading of his response would show that the prime minister used the parliament’s time to give yet another diatribe against the Congress, even while viewers waited to learn about the initiatives his government has taken to curb wide-ranging distress in India. His party, since 2014, has drowned all criticism by pitching itself against the Congress, in attempts to impress people with the notion that there is no real alternative to the Bharatiya Janata Party.

Modi’s Monday speech also turned out to be a similarly repetitive exercise, even as his government has had to face a near-united challenge from the opposition over the last few days in the budget session of parliament.

Reluctant to speak directly on what had caused inflationary pressures on the Indian economy, Modi indulged in whataboutery. He spoke about how supply chain and logistics support systems across the world have collapsed, but stopped short of any elaboration. Instead, he quoted one of Jawaharlal Nehru’s statements on cascading effects of international factors on inflation to take a dig at the Congress. He said his government’s economic policies have made inflation its first priority, “unlike the Congress”, as the BJP is invested in the problems of the “common people”.

While he charged at the Congress for changing the norms to calculate poverty levels during the UPA tenure to bring around “17 crore people” above the poverty line, he glossed over the fact his own government had tweaked the standards for calculating inflation in 2018 to make the figures look more friendlier.

On the important issue of increasing joblessness, Modi disregarded the opposition’s criticism that his government’s decisions over the last few years such as demonetisation, a flawed Goods and Services Tax regime, and lack of support to MSMEs were primarily responsible for precipitating the largest-ever unemployment rate in over 50 years.

Modi circumvented the accusations by elaborating on his government’s “vision” – something which he has explained many times over. Refusing to hold his government responsible for failing to create enough jobs, Modi said that previous governments had entrenched the thought that the government is the only “bhagya vidhaata”, meaning that only the government can make a difference to people’s lives.

“The thought has impeded Indian youth’s ‘kaushal’ (skill) and dreams. The political class has only encouraged such an egotistic thought. No, the government doesn’t have to do everything,” he said.

“We have to understand that India can’t remain in the clutches of 19th and 20th century thoughts. It has to change according to the needs of the 21st century,” he said, adding that BJP had emulated the 21st century vision in the path to India’s progress. 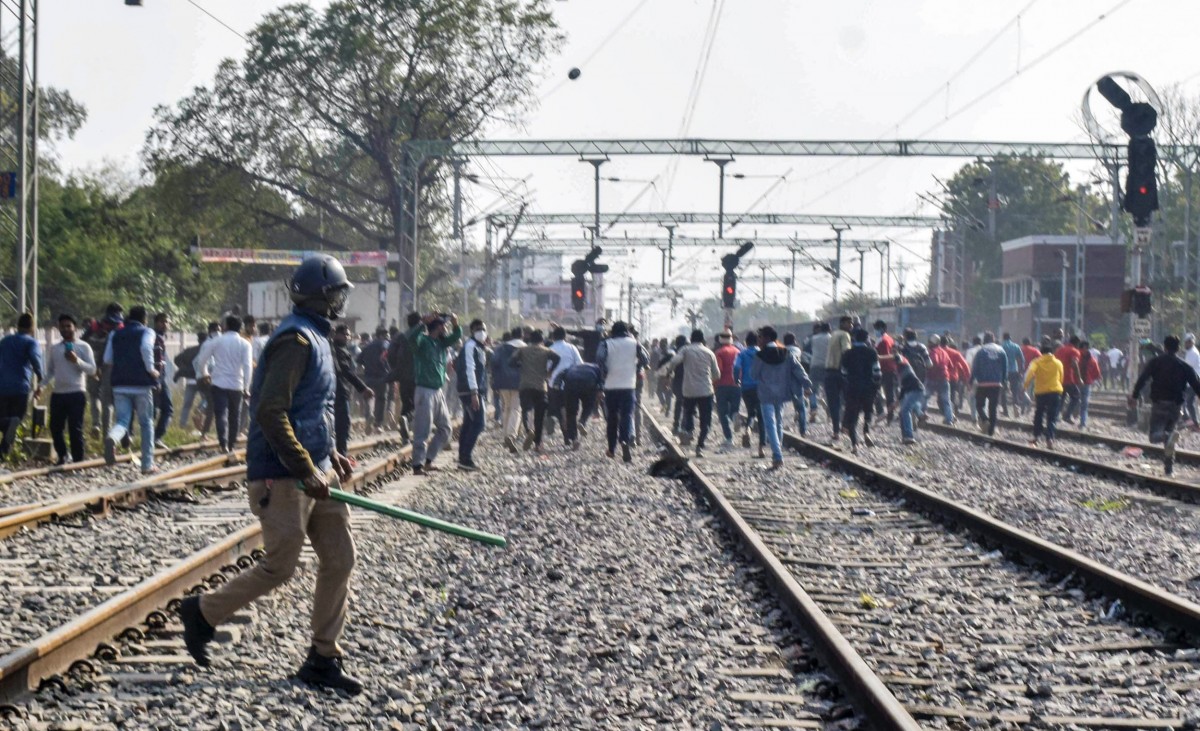 Modi, however, listed his government’s actions which have the potential to generate employment, although it is unclear how those steps would bring sustainable, quality jobs for two-thirds of India’s population who continue to be poor.

In an apparent response to Rahul Gandhi, who in his speech had spoken about the poor state of MSMEs in the current scenario, Modi said his government has given “necessary support” to the MSME and textiles sectors, cancelled more than 25,000 compliances, and simplified the tax structure to make it easier for entrepreneurs to set up businesses. “We have attempted to move towards our vision of Atmanirbhar Bharat and addressed the aspirations of 21st century Indian youth,” the prime minister said.

In one of the few concrete claims that he made during his speech, he said his government supported MSMEs with Rs 3 lakh crore which prevented 13.5 MSMEs from a complete collapse and saved 23 crore jobs. “Those parliamentarians who are connected to ground realities see the impact of our scheme for MSMEs,” he claimed.

In an apparent dig at the opposition for opposing the now-revoked farm laws, he said that his government took “big steps” in agricultural reforms that would have benefitted “small farmers” but the “opposition’s hate for them” prevented them, again indirectly alleging that opposition was responsible for an antiquated rural economy.

He went on to list a number of infrastructural projects that were paced up during his regime, even as he claimed that the number of start-ups has increased to over 7,000 from under 500 before 2014, and that India has the third-highest number of unicorns in the world. All such companies have the potential to become “multinational”, he said.

Over the last few years, the prime minister said, foreign direct investment has hit a record high and India is now among the top five countries in the renewable energy sector. He added that his government’s focus is on improving India’s manufacturing and service sectors, although the statistics say otherwise in both sectors.

Modi kept getting back to the theme of Atmanirbhar Bharat to say that India’s economic focus is now to manufacture its own defence equipment to make India stronger and also emerge as a global export hub of equipment in the future. Later, he spoke about the success of Mudra Yojana, although figures present a contrasting view. He similarly spoke about PM SVANidhi scheme – an incentivised micro-credit scheme for street vendors – although numbers indicate that only 11% vendors benefited from the scheme as of September 2021.

Summing up, he said that his government has made the private sector a stakeholder in India’s progress, and unlike the Congress, has encouraged entrepreneurs to lead India’s defence and mining sectors. Modi asserted that all such initiatives are generating employment across India. Whether or not he implied that the problem of joblessness is not as acute as it is being made out to be remains unclear.

On mismanagement of the pandemic

The prime minister’s biggest political spin-off was reserved for this section of his speech when he blamed the Congress and Aam Aadmi Party for catalysing the spread of the coronavirus in India’s hinterland. In his intent to attack the Congress, the prime minister accused the Shiv Sena-led Maharashtra government and AAP government in Delhi for providing train and bus tickets for daily-wage migrants who desperately needed to get to their villages in the face of a sudden lockdown announced by none other than the prime minister.

“You people (pointing at the opposition benches) pushed the labourers into difficulties,” he said.

“The Congress crossed the limit. During the first wave, when we had lockdown, when WHO was advising that ‘stay wherever you are’… the Congress at the Mumbai railway station gave tickets to labours to go and spread coronavirus. In Delhi, the government used mics on jeeps in slums to go home, arranged buses,” the prime minister said, likening these actions to “paap (sin)”. He said that the virus spread in states like Uttar Pradesh, Punjab and Uttarakhand also because of such poor decisions.

The claim belies the way most migrant labourers were thrown into a survival crisis after the prime minister announced a lockdown, only four hours before it was enforced. Not only was there a sudden commotion with people lining up at stores to stock up essentials but with the announcement also began one of the biggest migrations in independent India when daily wagers, stranded without jobs and shelter, began walking back to their homes hundreds of kilometres away. The prime minister may well remember that forced into such a crisis, not only the Shiv Sena-Congress-NCP and AAP governments, but also the BJP government in Uttar Pradesh and NDA government in Bihar arranged for buses to prevent additional commotion.

Migrant workers and homeless people queue to receive free food during a nationwide lockdown to slow the spread of the coronavirus disease (COVID-19), in Ahmedabad, India, May 1, 2020. Photo: Reuters/Amit Dave

During his speech though, Modi made no reference to the severity of the second COVID-19 wave in India, which saw oxygen and hospital bed shortages and an extremely high number – as yet not properly counted – of deaths. All of this had pointed to the government’s underpreparedness in facing the public health crisis.

In his legitimate defence, he said that the government has ensured that no one dies of hunger during the pandemic by distributing free ration to more than 80 crore people. He also claimed that India is very close to achieving a 100% target for the first dose of COVID-19 vaccine and remains close to 80% for the second dose. He also claimed that even during the pandemic, the government did not let the price of essential commodities “skyrocket”.

In what may be seen as a claim directed towards the poll-bound states, he said that the direct benefit transfer benefited crores of people during the time only because his government had ensured that the poor have a bank account. He also spoke about how his government ensured that there is a regular flow of fertilisers in the market to support farmers. He did not shy away from enumerating a list of projects that his government kicked off in poll-bound Uttar Pradesh, as he made references to newly-built canal projects in the state, Char Dham corridor and reviving the Gorakhpur fertiliser factory.

However, much of his stress remained on mocking the Congress, even as he accused the grand old party of misusing a global pandemic for its own propaganda. When the opposition benches interrupted him to demand concrete answers, Modi, who has often been criticised of using the parliament for BJP’s political messaging, said that he was forced to adopt such a tone and tenor because opposition leaders have misused the platform of the “pavitra (pure)” parliament for propaganda.

Since the Congress has lost any interest to come to power, much of its focus is to fuel the British doctrine of “divide and rule”, Modi said, adding that this was why the Congress members are the leaders of “tukde-tukde gang”. “This may fuel separatism in India,” Modi, whose party is often at the receiving end of criticism that its politics of religious polarisation may lead to a possible balkanisation of India, said.

Also read: The Issues Rahul Gandhi Spoke of Are Vital and Can’t Be Allowed to Drown in the Din

Laced with one jibe after another at the Congress and Rahul Gandhi, Modi said the grand old party has failed India’s aspirations to advance its own interests. He went on to name Indian states which have not returned Congress to power since the last two or three decades.

In attacking the Congress in a speech that was meant to respond to the opposition’s concrete criticisms, Modi came across as defensive. Pushed to a corner in most poll-bound states over livelihood issues, BJP appeared to have fielded none other than the prime minister himself to steer the narrative in its favour.

Over the last few days, one opposition MP after another attacked the Centre on these issues, while the Union ministers could not come up with convincing responses. As has happened before in such circumstances, it appears that the BJP’s last-minute resort was to fall back on Modi’s ability to deftly sidestep important concerns by indulging in rhetorical calisthenics, even as his speech failed to concretely address any of the opposition’s questions.