EC Concludes Mamata's Injuries Were Not Caused by an Attack, Suspends Director of Security

The poll panel has concluded that the West Bengal chief minister sustained injuries due to a lapse on the part of her security in charge. 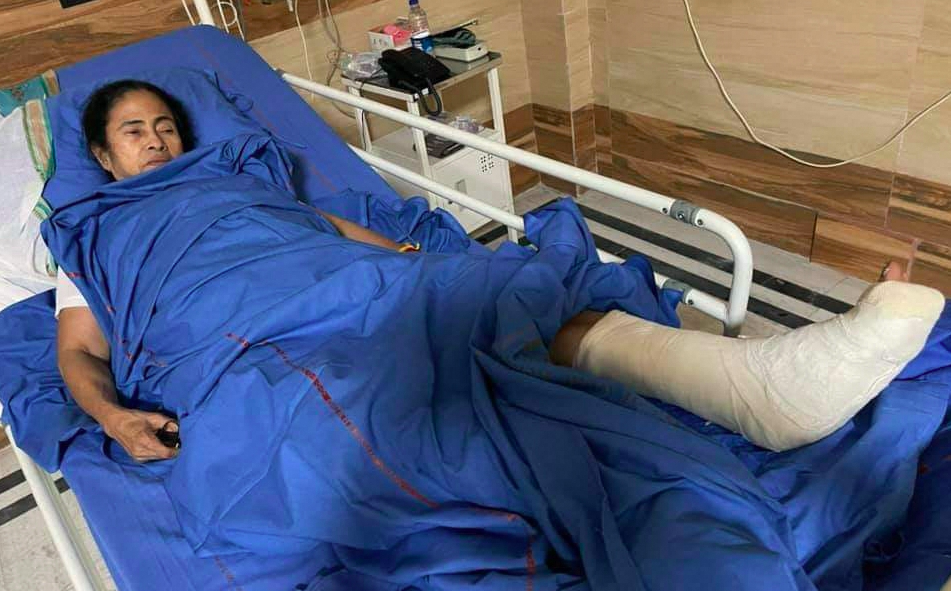 Kolkata: The Election Commission has concluded on Sunday that the incident in Nandigram which caused injuries to West Bengal chief minister Mamata Banerjee was an accident and not a planned attack, according to sources in the poll body.

The conclusion comes after the EC examined the report of two poll observers, which was submitted on Saturday.

The Commission concluded that Banerjee sustained injuries due to a lapse on the part of her security in charge, suspending her director of security Vivek Sahay. Additionally, the superintendent of police (Purba Medinipur) Praween Prakash was suspended and district magistrate Vibhu Goel was removed.

The EC’s observers had said that Banerjee was not using a bulletproof or an armoured vehicle despite being a star campaigner and it was a lapse on part of those responsible for her security, the EC believes.

While she was using an ordinary vehicle, her director of security, Vivek Sahay, was in a bulletproof car when the incident took place, the sources noted, citing the report of special poll observers Ajay Nayak and Vivek Dube.

Also, no approval was taken from the returning officer of the area where the incident took place, the sources said. Due to this, poll officials could not deploy videographers or flying squads, they added.

The incident which took place at Birulia bazar in Nandigram in East Midnapore district on March 10 after Banerjee filed her nomination had taken place “suddenly” though a “conspiracy theory” was spoken about, the report prepared by special observer Ajay Nayak and special police observer Vivek Dubey to West Bengal for the state election stated, a source at the CEO office said.

The report also said Banerjee was injured due to the suddenness of the incident.

“The incident was not a planned attack but an accident. It had taken place suddenly,” the source said, quoting the report.

About the injury to Banerjee, who is also the Trinamool Congress supremo, in the incident, the report also said that “the suddenness of the incident led to it. There was no conspiracy behind the incident.”

The report took into account the details provided by eyewitnesses present during the incident as well as the video grabs collected from them.

It also referred to the failure of the police personnel in-charge of the chief minister’s security in controlling the crowd which came “too close” to her.

“The local police and CM’s security failed to control the crowd and that led to the untoward situation,” the source said, referring to the report.

Following the Nandigram incident, state ADG (Law and Order) and nodal officer Jagmohan on Saturday directed all district administrations to arrange for the strictest security measures for the chief minister during her tours for campaigning in the districts for the eight-phase poll beginning on March 27.

“Security measures should be stringent for the CM. Security for other star campaigners must be tightened. We cannot take any chance after the Nandigram incident,” the source at the CEO said, quoting Jagmohan.

According to another official at the office of the CEO the two observers may visit South 24 Parganas, Howrah and Hooghly districts starting March 18.

“The two observers will meet senior officials of the district administrations and supervise the poll preparedness,” he said.

Meanwhile, state chief secretary Alapan Bandyopadhyay in a reply to the EC for a detailed report stated that the cause of the incident at Nandigram was “not clear from the video grab” collected from the place.

“The CM’s vehicle was passing through a crowded area. It was then that there was a push on the door of her car. But it’s not clear whether the push was deliberate or not. The video grabs collected are not very clear,” a source at the CEO said, quoting Bandopadhyay’s second report.

The chief secretary was learnt to have attached one video grab along with the report, he added.

The EC had sought reports from the state government as well as the two observers on the incident. The state administration had submitted its report on Friday.

Election to the 294 assembly seats in West Bengal will be held between March 27 and April 29. Votes will be counted on May 2.

Note: This article was updated to include the EC’s action to suspend Vivek Sahay.