Rahul Dubey had given shelter to around 70 protesters in his Washington home after he witnessed the police pepper-spraying those who stayed on the streets past 7 pm.

New York: An Indian-American, Rahul Dubey, who had opened the doors of his Washington DC home to over 70 people demonstrating against the killing of George Floyd, has been hailed among the Heroes of 2020 by the TIME magazine, which is honouring those who went above and beyond the call of duty this year.

The ‘Heroes of 2020’ publication also named Australia’s volunteer firefighters who risked everything to keep their country safe, food-stall owners Jason Chua and Hung Zhen Long from Singapore who didn’t let anyone go hungry during the COVID-19 pandemic, Pastor Reshorna Fitzpatrick and her husband Bishop Derrick Fitzpatrick of Chicago, who transformed their church to support their community during the trying year.

A newspaper deliveryman Greg Dailey, who began a grocery drop-off service in mid-March to anyone in need along his paper route and has since supplied more than 140 homes and conducted over 1,000 grocery runs in New Jersey’s Mercer county, was also named by the magazine. From citizens providing food and shelter to those in need to volunteers who protected their neighbours from natural disasters, these heroes went above and beyond the call of duty in 2020, TIME said.

TIME described Dubey as “The Man Who Gave Shelter to Those in Need.” 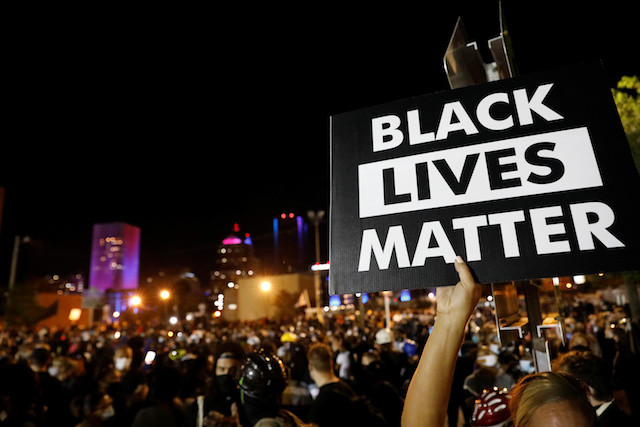 A demonstrator holds up a “Black Lives Matter” sign during a protest over the death of a Black man, Daniel Prude, after police put a spit hood over his head during an arrest on March 23, in Rochester, New York, U.S. September 6, 2020. REUTERS/Brendan McDermid

On June 1, as demonstrators filled the streets of Washington DC to protest the killing of African-American Floyd, Dubey was home, not far from the White House. After a 7 pm curfew, he noticed crowds in the street outside as “police had set up barricades seemingly to trap protesters, and were pepper-spraying those who remained. Dubey decided to take action, TIME said.

“I open my door, and I start yelling, ‘Get in’!” says Dubey, who works in the health care sector. All these people were swarming in. Dubey said he gave about 70 protesters refuge in his home, housing them overnight to avoid curfew breaches. “People were coughing, crying, strangers pouring milk into strangers’ eyes,” Dubey said. “They were sharing information, writing down numbers for bail bondsmen. It was this real camaraderie.”

A report in TIME said Dubey claims police officers made several attempts to breach his sanctuary that evening: posing as protesters trying to get inside, and attempting to intercept the pizza delivery he had ordered for his houseguests.

The move to open his door was driven by instinct, Dubey says nearly six months later. It’s what was needed. For his act, Dubey had been hailed as a hero and saviour as those who took shelter in his house started tweeting about it.

“Rahul saved lives last night,” one Black Lives Matter activist had written on Twitter. “He ended this with an inspirational speech about not giving up and keeping up the peaceful fight. What a guy. Thank you, Rahul.”

Dubey had told BuzzFeed News that it wasn’t a choice to open his door and provide refuge to the mostly young protesters. “If you had seen what was going on in front of my eyes, there was no choice. People were getting pepper-sprayed and beaten and slammed to the ground,” he had told the media outlet.

“I hope that my 13-year-old son grows up to be just as amazing as they are,” Dubey was quoted as saying by WJLA news.

Floyd, 46, died in Minneapolis on May 25 when a white police officer pinned him to the ground and knelt on his neck as he gasped for breath. The footage, which went viral, showed Floyd pleading with the officer, saying he can’t breathe. The four police officers seen in the footage have since been charged.

His death triggered nationwide violent protests with a section of the protesters resorting to looting and rioting across the country, leaving behind a trail of destruction.