Several BJP leaders have felt that their party's poor electoral performance in Haryana and Maharashtra could be attributed to the economic slowdown.

New Delhi: On the day when India’s quarterly GDP growth dropped to a six-year-low 4.5%, members of the opposition, the ruling party and its allies came together to slam the Union government for its inability to curb the economic slowdown.

Allies question BJP on the economy

The first to question the Union government were the BJP’s own allies. “The state of the economy is alarming, we all are concerned. It is causing alarm because of joblessness and lack of growth which is leading to unemployment.” Shiromani Akali Dal leader Naresh Gujral told the Indian Express.

Gujral went on to say that there was a sense of disquiet among NDA partners and that the BJP had not convened a single meeting with its allies to discuss important matters. “The allies are quite unhappy. The oldest ally, Shiv Sena, has already walked out and others are waiting at the departure lounge. Allies are not vying for positions, but there has to be consultation,” Gujral said.

In a similar vein, Janata Dal (United) leader K.C Tyagi too hit out at the Modi government for failing to protect India’s national assets. The senior leader said that his party was worried about the declining growth rate, the Centre’s plan to privatise public sector enterprises and the all-pervasive agrarian crisis which has led to a steep rise in distress migration.

“The government should not ignore or ridicule warnings of economists or former RBI governors. It should open modes of communication, there should be a meeting of political leaders and economists. People like (former PM) Manmohan Singh should be called to discuss the issue. Because this is not a matter of confrontation, it is a matter of consultation,” Tyagi told the Indian Express.

“Being a socialist party, the JD(U) has serious concerns about the pace in which assets of PSU are being sold to private firms. Selling PSU assets for revenue collection has proved to be a wrong method of dealing with economic crisis. During Atal Bihari Vajpayee’s time, there was a ministry for it, but it did not yield results. Even in Manmohan Singh’s term it happened but with no results,” he said, adding that the government should not have ignored or ridiculed warnings from economists and former RBI governors.

Gujaral, on the other hand, pointed out a “talent deficit” in Modi’s cabinet. He said that all those ministries which are being “manned by competent ministers” were doing well but most others were not because of a lack of efficient administrators. Which ministers Gujaral was pointing towards remains unclear.

While the BJP leaders who spoke to the national daily avoided public remarks, they did not downplay the crisis. “When NSSO reports on unemployment and rural consumption reports came to light, our people cited alternative statistics on automobile sale, Ola/Uber services, full airports, cinema earnings to counter. That the finance minister has come to a situation to admit slowdown, if not recession, is a way of acknowledging the situation ultimately,” a BJP leader told the daily on the condition of anonymity.

Another senior BJP MP said, “There is no buoyancy in industry/business these days. Even GST collections are down. It is a matter of concern. We will talk over it. But not on phone please.”

Another saffron party’s functionary said that the economy should be the government’s focus as the “situation doesn’t look promising”. The leader remained doubtful that the finance minister’s budget announcements had any sort of positive impact on the economy.

BJP leaders have felt that the poor electoral performance of their party in Haryana and Maharashtra could have been a result of this economic slowdown that had led to joblessness and general insecurities.

Such has been the impact of the slowdown that the National Democratic Alliance members took turns to question the government in the Rajya Sabha on Friday.

Gujral asked Goyal whether RoDTEP, a scheme to refund taxes to exporters who allege that the new taxes imposed by the Modi government has affected their standing in the global markets, would materialise anytime soon. Union commerce minister Piyush Goyal responded by saying that the scheme was being discussed between finance and commerce ministries.

Similarly, Narendra Jadhav, a nominated member, asked why India had not been able to take advantage of the US-China trade war that had led to manufacturing units fleeing China. Goyal then spoke about the slash in corporate tax and other economic measures to “boost entrepreneurship”. 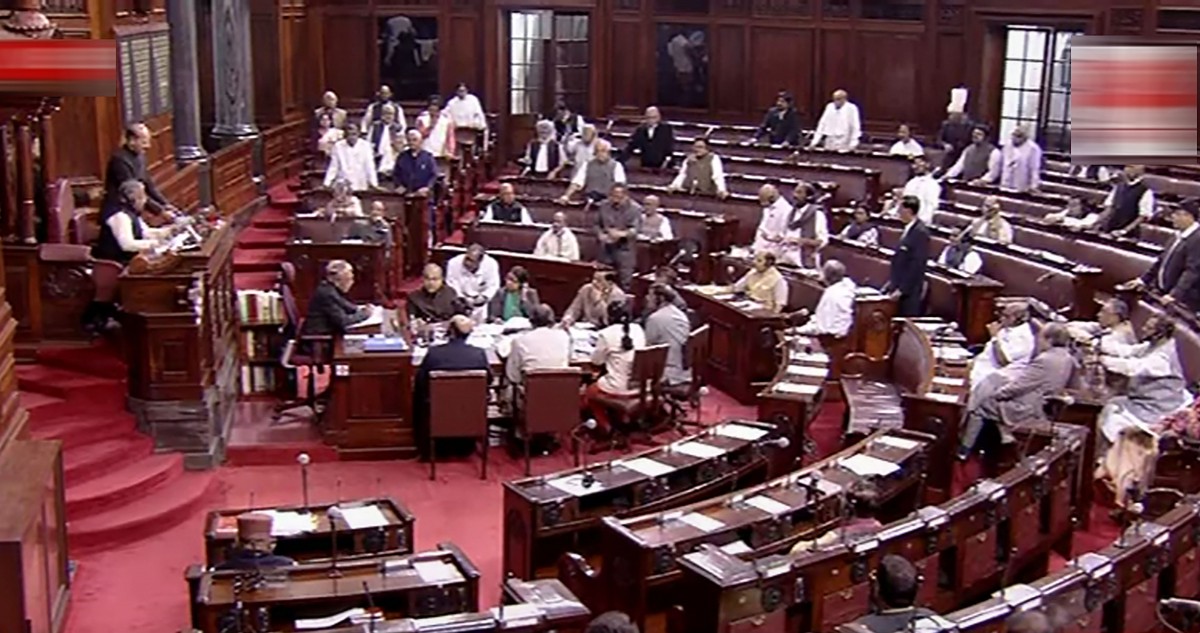 A view of the Rajya Sabha during ongoing Winter Session of Parliament, in New Delhi, Monday, Nov. 25, 2019. Photo: PTI

A BJP member Lt Gen D.P. Vats (retd) asked Goyal about possible job losses due to increasing automation. The commerce minister replied by saying that although it was true that “modernisation and technology upgradation” affects employment temporarily, “India cannot afford to be left behind”.

“I think, there is no empirical evidence or very detailed evidence of workers losing jobs in a very big measure,” Goyal said.

To a question by Trinamool Congress’s Subhasish Chakraborty on whether India is losing its competitive edge in the manufacturing sector, Goyal said that the government was taking steps to address these issues.

The Congress spokesperson Randeep Surjewala said that while the government concentrated on politics of religious polarisation for electoral gains, it had no inkling about how to contain the economic slowdown.

“India’s GDP has collapsed to an abysmal 4.5%. We are in a virtual free-fall. This is the lowest GDP quarter in 6 years. But why is the BJP celebrating? Because their understanding of GDP (Godse Divisive Politics) suggests double digit growth levels. All in the perspective,” he said on Twitter.

India’s GDP has collapsed to an abysmal 4.5%. We are in a virtual free-fall. This is the lowest GDP quarter in 6 years.

But why is the BJP celebrating?
Because their understanding of GDP ( Godse Divisive Politics) suggests double digit growth levels.

All in the perspective! pic.twitter.com/HsJuIPDDgV

Trinamool Congress Derek O’Brien too tweeted, “Lowest GDP growth in 26 quarters! No answers from FM. No wonder, full Opposition walked out of Rajya Sabha 40 minutes into the FM’s speech this week. And ministers dozed off in their seats #Parliament.”

CPI(M) general secretary Sitaram Yechury speaking at a conclave too spoke about the state of the economy and said that the lack of coordination between states and the Centre was also responsible for such a poor situation.

“This is the New India. This government wants a Hindu Rashtra which they want to do keeping states at bay. FM (finance minister) says this is not a recession, then what is the solution? The economy is the county won’t do better until there is public pressure. It is complete one-way traffic, no consultation. An authoritative govt which doesn’t want to listen to anyone,” he said.

Even the former secretary to the government Siraj Hussain, who is a specialist in the agrarian economy, joined the ranks of critics. “4.5% is bad news, this means there are no jobs and it really doesn’t bode well for the country, the government needs to give this a very serious thought,” he said.