Bhagwat's comments on Chinese "encroachment" into Indian territory contradicted Prime Minister Narendra Modi's assertion that “no one has intruded into our territory”, which had invited a lot criticism from the opposition. 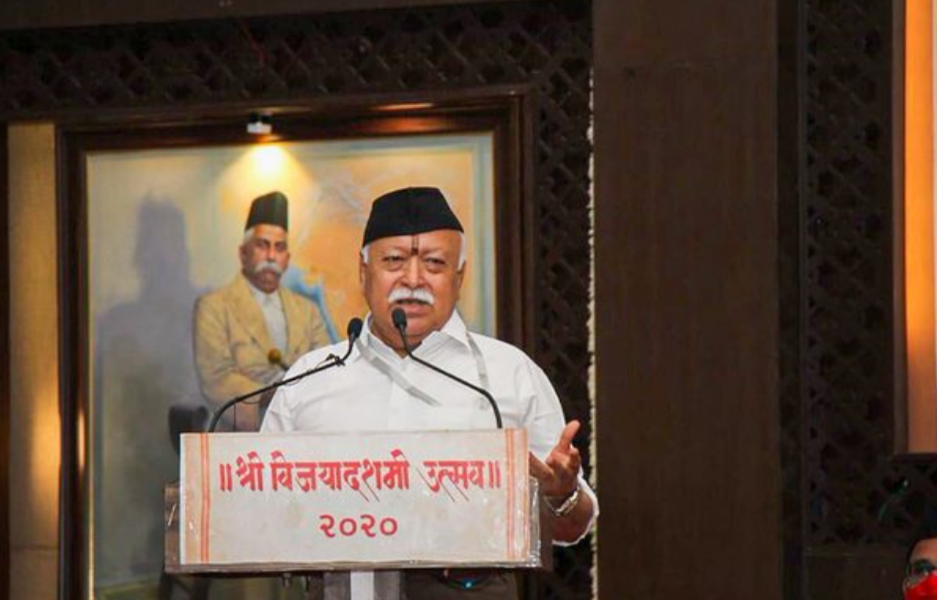 RSS chief Mohan Bhagwat speaks during the celebration on the occasion of Dussehra, in Nagpur, on Sunday. Photo: PTI

New Delhi: Rashtriya Swayamsevak Sangh (RSS) chief Mohan Bhagwat has called for India to be more powerful than China in terms of military preparedness, and strengthen ties with other neighbours to counter the Chinese. While doing so, though, he said that China had crossed into Indian territory – something Prime Minister Narendra Modi first categorically denied, and has since failed to mention.

“China encroached on our borders amid the pandemic,” Bhagwat said, adding the world knows the expansionist nature of that country. India’s response to the “encroachments” in Ladakh had “numbed and jolted” China, he reportedly said on Sunday at the RSS’s annual Vijayadashami event.

“We don’t know how it will react. So the way forward is to be alert and prepared. We should be more powerful than China in terms of military preparedness, economic conditions, international relations and also relations with neighbouring countries,” he said.

The government should forge an alliance against China with immediate neighbours like Nepal, Sri Lanka and others, he said. “India needs to grow bigger in power and scope than China,” he added.

The RSS, though, didn’t appear too happy that Bhagwat had openly contradicted the prime minister. Soon after the speech, the RSS tweeted an edited text of the address, changing “hamari seemaon ka jo atikraman kiya (intruded across our borders)” to “atikraman ka prayas kiya (attempted to intrude)”, the Telegraph reported.

Modi’s assertion that “no one has intruded into our territory” had invited a lot of criticism from the opposition. Congress leader Rahul Gandhi used the words in Bhagwat’s original to lash out at the government, saying the RSS chief too knew that Modi had lied. ANI deleted its original tweet quoting Bhagwat directly, but Gandhi shared a screenshot as proof.

Deep inside, Mr Bhagwat knows the truth. He is just scared to face it.

The truth is China has taken our land and GOI & RSS have allowed it. pic.twitter.com/20GRNDfEvD

On June 15, at least 20 Indian soldiers were killed in a brutal border clash with Chinese soldiers at the Galwan valley in Ladakh region. A few days after, on 19 June, Modi at the all-party meeting on China said, “Na koi wahan hamari seema mein ghus aaya hai, na hi koi ghusa hua hai, na hi hamari koi post kisi dusre ke kabze mein hain (No one has intruded and nor is anyone intruding, nor has any post been captured by someone).”

During his nearly 80-minute speech, the RSS chief supported the Centre’s move on the three contentious farm laws, and backed Uttar Pradesh chief minister Yogi Adityanath’s theory of an “international conspiracy” against the state government. However, there was no mention of the Hathras incident which had triggered widespread powerful protests against the Adityanath government, which the state police is investigating to look into alleged foreign influences.

Bhagwat also supported the Centre’s move over reading down of Article 370 in Jammu and Kashmir and the passage of Citizenship Amendment Act (CAA) in parliament.

On the pandemic, he said, “We need not fear the coronavirus, but should be alert and cautious. We cannot stop living. Coronavirus is spreading but fatalities are less. Due to the pandemic, we have started learning the importance of hygiene, cleanliness, environment, family values all over again.”