The BJP’s fear of losing in 2019 is taking India’s democracy into dangerous terrain. Vladimir Lenin famously said that “there are decades where nothing happens; and there are weeks where decades happen”.

The last few days in Karnataka politics saw opposition unity in India accelerate by months, ahead of the 2019 elections, while the BJP’s tactics offered a snapshot into how quickly political institutions can be degraded with one stroke into a future which may otherwise take years to materialise.

Following B.S. Yeddyurappa’s resignation, the opposition has reasons to celebrate. Several parties came together in the attempt to counter the BJP’s strong-arm tactics. The Congress and Janata Dal (Secular), or JD(S), were supported by Mamata Banerjee, the BSP’s Mayawati, Telangana’s K. Chandrashekar Rao, Chandrababu Naidu, the RJD’s Tejashwi Yadav, Sharad Pawar, Sitaram Yechury and others.

Regional parties have evidently wised up to the reality that the BJP is now the Walmart of Indian politics – a monopolistic giant that seeks to take over the high street peopled by smaller entities. Opposition unity in the past has usually been a languid, uncoordinated process where no one really takes charge of the matter; it meanders through gestures ahead of general elections and peters out because of irreconcilable turf battles. That will likely change now as the BJP’s ambitions and methods focus the minds of everyone else in the political arena.

This week also showed us that an orderly transfer of power after the Lok Sabha elections in 2019 can no longer be taken for granted. Yeddyurappa was sworn in without showing demonstrable proof of having the support of 112 MLAs. The governor of Karnataka rejected the JD(S)-Congress claims and the BJP reversed the arguments it made in the case of Goa that post-poll alliances can be invited to form governments.

We were reminded this week that Manipur has been the scene of brazen constitutional subversion wherein eight Congress MLAs, who joined the ruling BJP, do not sit on the treasury benches during assembly proceedings to avoid invoking the anti-defection law. All sorts of methods were used to engineer defections in Karnataka. H.D. Kumaraswamy alleged that Rs 100 crore was on offer for each MLA. The Congress has released tapes of conversations where money is discussed freely. Aircraft chartered to fly out its MLAs were allegedly denied permission by civil aviation authorities.

Spurious legal reasoning was deployed too. The attorney general of India argued before the Supreme Court that the anti-defection law does not apply to MLAs who have not yet taken their oath – an argument the court termed as “preposterous”.

All this is worrying because it is one more attempt by the BJP to weaken the checks and balances in the political system. Consider the state of other institutions that are meant to scrutinise government narratives and policy. The mainstream media, for one, now operates under great duress. Dissenting faculties and students in universities are subject to regular intimidation. Parliament is supposed to be a check on executive power but no longer works as one; its deliberative side has suffered especially. Lok Sabha speaker Sumitra Mahajan resolutely refused to table a no-confidence motion against the government in the last session of parliament.

If government formation in states is to be added to this list and gamed through money, muscle and control of media, then there would be (a) no assurance about the transfer of power nationally and (b) state assemblies would stop becoming spaces for contesting political ideas and policy. Such a turn for our institutions will dramatically alter the functioning of parliamentary democracy and force opposition politics off the halls of power to protests on the street. This would, at India’s scale, set the stage for great instability which the country cannot afford. Cooler heads in the Rashtriya Swayamsevak Sangh (RSS) would need to weigh the costs of such an approach – they would have to consider whether precipitating popular action and such confrontation is worth risking the gains they have made in state institutions so far.

It’s worth assessing why the BJP went down this desperate route in Karnataka, as the reasons may hint at its appetite for similar adventures in the future. Several factors may have influenced the decision. The BJP wants to maintain the veneer of dominance – taking Karnataka would have been a useful signalling device to the political class in south India and elsewhere that its advance is inexorable. The BJP spends heavily in campaigns; its politicians must also feel the pressure of securing returns on investment.

There is also the Narendra Modi factor. The Karnataka elections showed that he is not big enough to conquer South India all by himself. In some ways, the aftermath of the verdict was one big distraction from discerning the limits of his appeal. Large swathes of South India are evidently still impervious to his charm, even as youth reportedly gravitate to him. 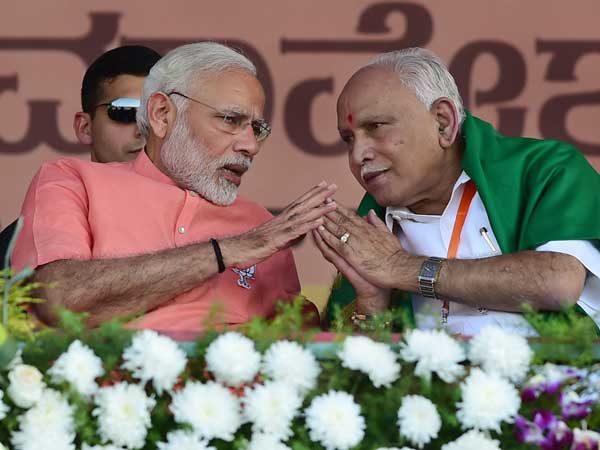 Note that the BJP threw everything into the campaign and yet its vote share is less than that of the Congress. There were full length advertisements in newspapers and many rallies. Fake news campaigns proliferated. The Reddy brothers were given a clutch of seats. Modi himself gave provocative speeches and got himself the wall to wall coverage that his party wanted, and yet it fell short. The BJP finds itself in a situation where Modi can no longer assure it of victory and yet the party needs to appear dominant – a scenario where the temptation to use other methods is great. If Modi remained the figure he was in 2014, the BJP wouldn’t be regularly needing governors now.

There is one more reason why the BJP is inclined to subvert norms and institutions in an effort to stay on in government. The BJP’s governance style has been such that it has put itself in a situation where it cannot afford to lose power next year. Modi’s tenure has been marked by serious political and ideological overreach – the last thing the party can countenance is the full story of its stint in power unfolding in public after 2019 through inevitable bureaucratic leaks.

The Indian public knows very little about how decisions were made on the big stories in the last four years such as demonetisation, the handling of the Reserve Bank of India, the targeting of Jawaharlal Nehru University and the Aam Aadmi Party government in Delhi, changes in textbook materials, the extent of RSS influence on institutions, the Goods and Services Tax and its awful aftermath, policies in Kashmir, the pricing of Rafale aircraft, and generally how the centralisation of power in the PMO played out in these. There will also be the fear of score settling by opposition parties in the future. There is plenty to hide and thus plenty incentive to try unscrupulous methods. India’s democracy may not be out of the woods just yet.

The opposition, however, know that they are not bereft of options. They’ve just got new gust in their sails because of Yeddyurappa’s resignation. The Congress-JD(S) alliance is not expected to be smooth but they will be mindful of the costs of losing in 2019. A major task of the opposition nationally is to project order from diversity to ensure they are believable to the media. The BJP should, in its own interest, downsize its style of politics and genuinely recommit to the norms of parliamentary democracy but there are few indications that it is willing to do so. More dramatic times lie ahead.

Sushil Aaron is a journalist. He tweets at @SushilAaron.