In UP's Purvanchal, BJP Pins Hopes on Welfare Schemes. But Will They Pay Off On Counting Day?

The BJP has devised a new vote bank in Uttar Pradesh called 'beneficiaries' (of welfare schemes), which the party thinks would offset the potential losses predicted due to price rise and unemployment. Purvanchal (Uttar Pradesh): The Bharatiya Janata Party (BJP) in Uttar Pradesh is hopeful of reaping electoral dividends in the state’s Purvanchal region based on the slew of welfare measures carried out by its Union and state governments. The party has even devised a new vote bank to describe those who benefited out of its welfare schemes, as ‘laabdhaaris or beneficiaries’.

There is a belief among the party base that its welfare schemes – such as ration, housing, pension, toilets, Kisan Samman Nidhi, cash credit to unorganised sector workers and e-shram cards – would have voters choosing the BJP over others.

Banking on the ‘beneficiary narrative’, BJP has carried out aggressive campaigns on social media to project that the electoral prospects of the party are strong. However, the situation on the ground is markedly different.

In Purvanchal, there is an increased political consciousness among the masses which overrides the ‘beneficiary’ narrative. How inflation, unemployment and other issues have rendered life difficult are the hot topics of public discussion. Meanwhile, a large number of people who are still not covered under government schemes feel that they have been discriminated against.

Also read: UP Polls 2022: Can Akhilesh Yadav Make a Dent in the BJP’s Brahmin Vote Bank in Purvanchal?

Narendra, who sells vehicle stickers at fairs at Kopiya in Sant Kabir Nagar, lives in Khalilabad’s Sudhiyani locality. He has been selling stickers for bikes and four-wheelers for many years and sells all kinds of stickers – fashionable ones, making a particular style statement and patriotic ones.

Narendra hails from the Dalit community and till two years ago he used to travel to many metropolitan cities, including Delhi, and earned around Rs 300 to Rs 600 per day. When the nationwide lockdown was abruptly imposed amid the threat of the coronavirus, he was in Kanpur and remained stuck there for 10 days. He somehow managed to reach home in a harrowing journey covered partly on foot, on an auto-rickshaw and a tractor-trolley. It took him seven days to reach his destination. After the traumatic experience, he could not muster the courage to leave his house again. Now, he makes a living out of selling stickers in local markets and fairs in and around Sant Kabir Nagar. He got registered on the government’s Shram Portal for labourers, but has not received any money yet. His son also applied for housing under the PM Aawas Yojana, but has not been granted any accommodation so far.

During the BSP rule, he got a house in the Kanshi Ram Colony. He has also been receiving ration. When asked whether welfare schemes would affect his vote, he says, “Oh Maharaj! Who votes for food and water? Our vote is decided.”

“This time, we will show what people are voting for.”

Saddam Hussain, a resident of Sauraha village, works at a brick kiln at Bansthan in Gorakhpur’s Pipraich assembly constituency where he transports bricks on his horse cart or ekka. Some Samajwadi Party leaders have brought Hussain along to Akhilesh Yadav’s rally and are clicking photographs and making videos on his cart.

According to Hussain, he carries 3,000 bricks daily to earn Rs 150 a day. Half of this money is spent on feeding the horse while the rest goes to support his family, which consists of his aged father, wife and two children. He works at the brick kiln for three months, and at the end of the season, he goes to Hyderabad for other work. He also works as a painter.

During the lockdown, he was in Hyderabad and was stuck there. When his savings started running out and was left without food or water, he set out on foot to reach his village accompanied by seven other labourers. He was soon exhausted and bought an old bicycle for Rs 2,000 from Chennai and rode it. It took him three weeks to reach home. Saddam says that hunger forced him to leave for Hyderabad again.

While Saddam is away in Hyderabad, his father looks after his horse, Raju. His two brothers are also labourers in other cities like him and work at the brick kiln when they return. He says his vote had drifted somewhere else in the last election, but not this time. Saddam has received the Kisan Samman Nidhi thrice but didn’t receive it afterwards. He says that though he gets ration, the salt is contaminated with glass particles. When asked about the claim that people are voting for the BJP for providing ration, he said, “This time, we will show what people are voting for.”

“It would be great if things could change. We are in great distress”

Near a bridge over Ganga at Ghazipur Ghat, Khan, a middle-aged man sells spectacles, rings, bracelets, and caps on a cart. Khan used to have a bicycle repair shop earlier. He was also a labourer in Delhi. As he did not profit much from the business, he started selling glasses near the bridge. He earns Rs 300 to Rs 400 daily. He lives in a locality on the banks of Ganga which has a dominant population of the Nishad community. 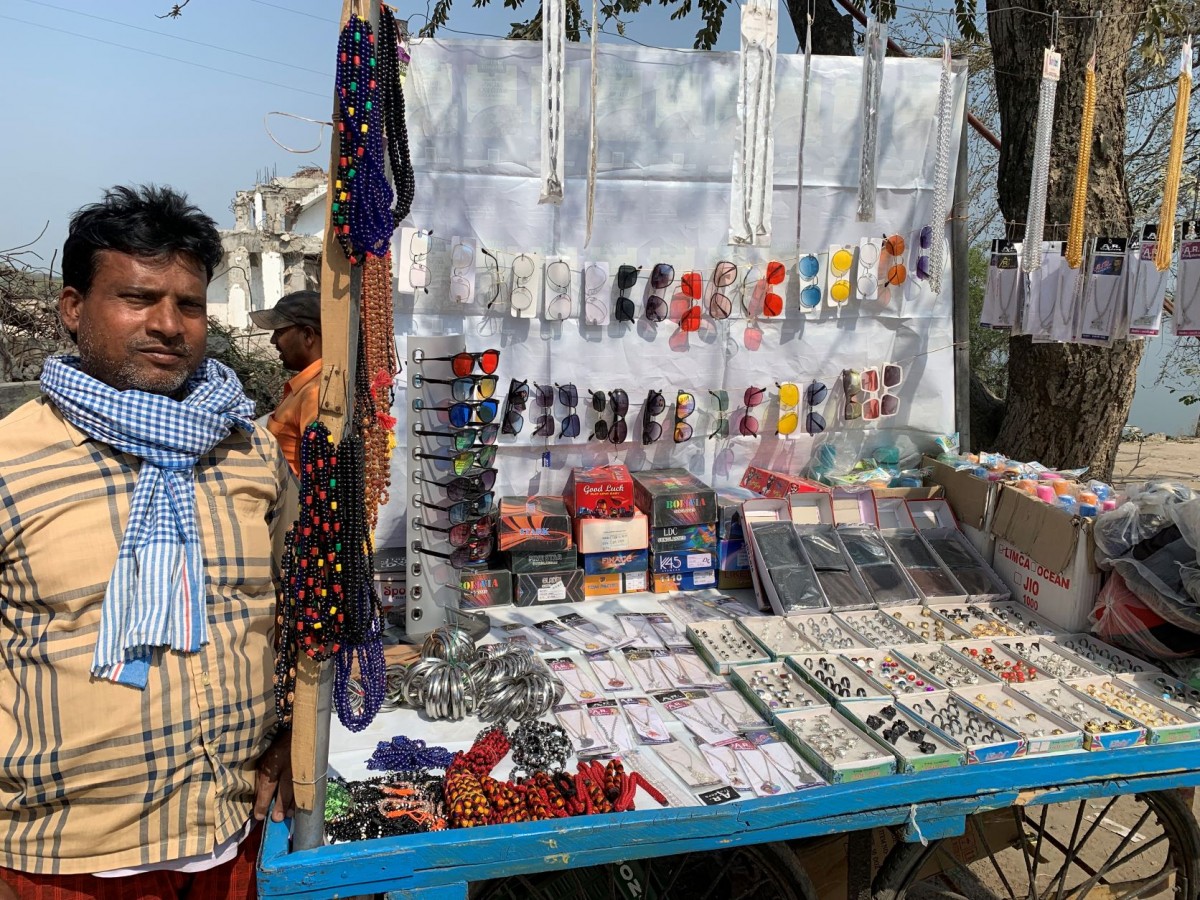 According to Khan, while the Nishad community members got houses worth Rs 2.5 lakh, poor people like him, living in dilapidated shacks, did not get it despite applying for housing.

“It’s been one and a half years since I applied,” he says. “My name was selected once under the toilet scheme, but was later struck out.”

Khan says that no Muslim in our locality has been granted the benefit of housing or other schemes. He is aware of the labour portal and has even registered on it, but has not received any money under it. He feels that there is discrimination in granting benefits of various schemes.

Also read: For Crying Out Loud: Emotional Campaigns Upend Predictions Ahead of Last Phase of UP Polls

When asked about the popular opinion in the elections, he says, “Do you think things will change? Let us see what happens. It would be great if things could change. We are in great distress. Earlier, we could eat and drink comfortably. Now, there is so much inflation that one has to think twice about buying even a litre of oil.”

“They are saying on the news that petrol prices are going to rise again,” he adds.

Soon a teenager standing near him shows him a video clip of the SP candidate’s roadshow and says, “Sahu ji (local SP candidate) is going to win.”

“There is anger among people due to inflation and unemployment.”

Sanjay Verma is a bhuja (a local roadside snack) seller in Ghazipur’s Durhiya village in Zamania assembly constituency. Verma opens shop at around three in the afternoon and does business till 8 pm. He says he makes around Rs 400 to Rs 500 rupees each day. An OBC, Verma had to leave his studies due to financial constraints and was forced to start working as a teenager. He worked at a sweet shop and learned how to make sweets. During the wedding season, he prepares sweets and other items for wedding functions and other parties. Once the season is over, he sets up his bhuja cart. He has a wife, two sons and a daughter. He says he could work as a chef at a fancy hotel or restaurant if he knew how to speak English.

“I have a lot of talent and know a lot of stuff,” he says. “I have struggled my whole life, and I am still doing it.”

Verma had also applied for housing under the PM Aawas Yojana, but did not get it. He has purchased an LPG connection out of his own pocket. Despite being a street vendor, he has not received benefits under any scheme.

He says, “Whoever received benefits and wants to vote, may vote. We didn’t receive anything. Inflation is the worst among all issues. Look at the hike in prices. Cooking oil and petrol are getting more and more expensive. People are angry because of inflation and unemployment. Therefore, people will not vote for the BJP. Here, the BJP and the SP are pitted against each other. But the SP is likely to win.”

“I am tired of listening to Modi ji”

Kodai village of Ghazipur’s Zahurabad constituency is located near the Purvanchal Expressway, about 22 kms from Mau. On the road to the village, 22-year-old Sandeep Yadav has set up a kiosk. Sandeep is a graduate and opened a shop two months ago with an investment of about Rs 40,000 as he could not find a job despite searching for more than three years.

Sandeep says that during the pandemic, he travelled to Barauni to train as a crane operator and worked as a labourer for two months. He also tried to find work elsewhere, but could not find a permanent job. Sandeep has two sisters who have pursued B.Ed and BTC, but both of them are also unemployed. Finally, he set up the kiosk.

Two young men, Rahul and Dinesh, sitting outside the kiosk, sarcastically remark that Sandeep has now become “atmanirbhar (self-sufficient). Sandeep says that he cast his vote for the first time in 2014. Back then, he had voted for the BJP as he was quite influenced by Narendra Modi.

“Modi ji used to make so many promises about things that would happen once his government was formed,” he says. “But now I am tired of listening to him.”

Mukesh, another local present there, says, “Modi and Yogi met but did not discuss unemployment whereas Akhilesh Yadav is talking about employment in every meeting.”