Unimpressed by unfulfilled promises over the years, voters are confused about who is most likely to seriously respond to their issues. 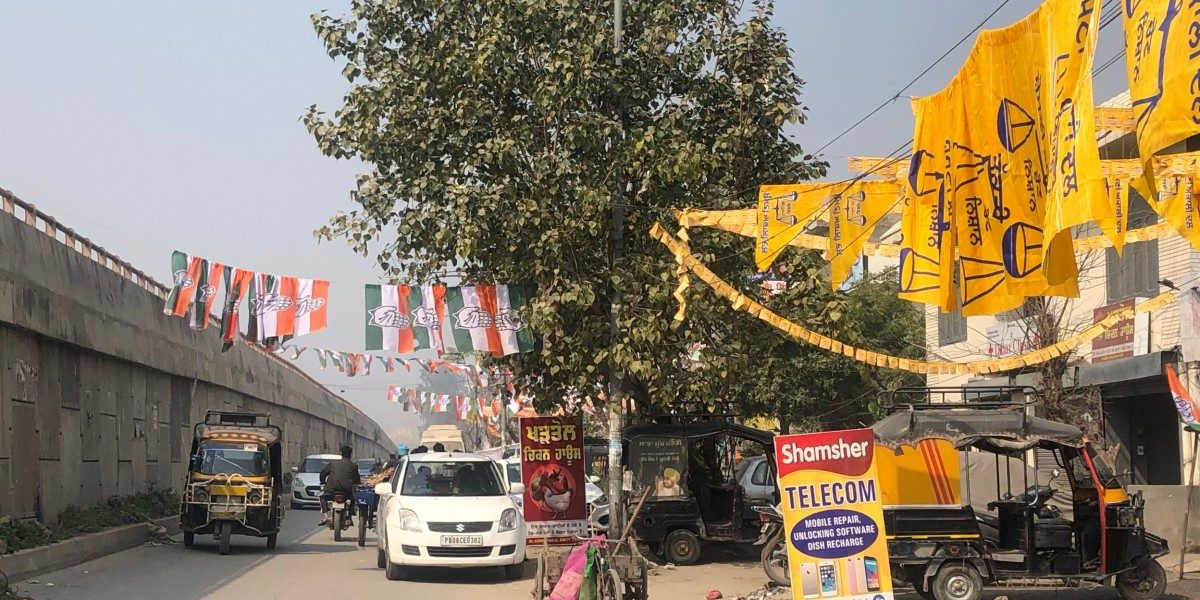 Jalandhar/Amritsar: In Punjab’s Dalit heartland and the NRI rich Doaba region, some key words that figure prominently in people’s conversations are Canada, unemployment, drugs and inflation.

Every Saturday, young people are found not outside multiplexes or shopping malls, but hotels and banquet halls to appear for the IELTS exam. This trend has been growing amongst the working class too.

Amidst hoardings of Congress, AAP, SAD-BSP, BJP candidates at IELTS centres, Mandeep Singh (23) from Ahmadpur village in Kapurthala, whose family runs a taxi service, said, “People in my village are talking about a ‘jhaadu (broom – AAP’s election symbol), but I am concerned about going to Canada. I could not clear my IELTS exam earlier but I will try again. Here we don’t have any jobs and even if we get one, the salary is meagre and inflation is a headache.”

Mandeep said, “Nearly every boy in our village has moved to Canada, Australia, the UK or New Zealand. Though people from Doaba have been going abroad for a long time, with the availability of study visas the trend has picked up pace. People want jobs and a good quality life, not lofty promises.”

Like Mandeep, there are several young people who find themselves caught between unemployment, moving abroad and the burning issue of drugs. 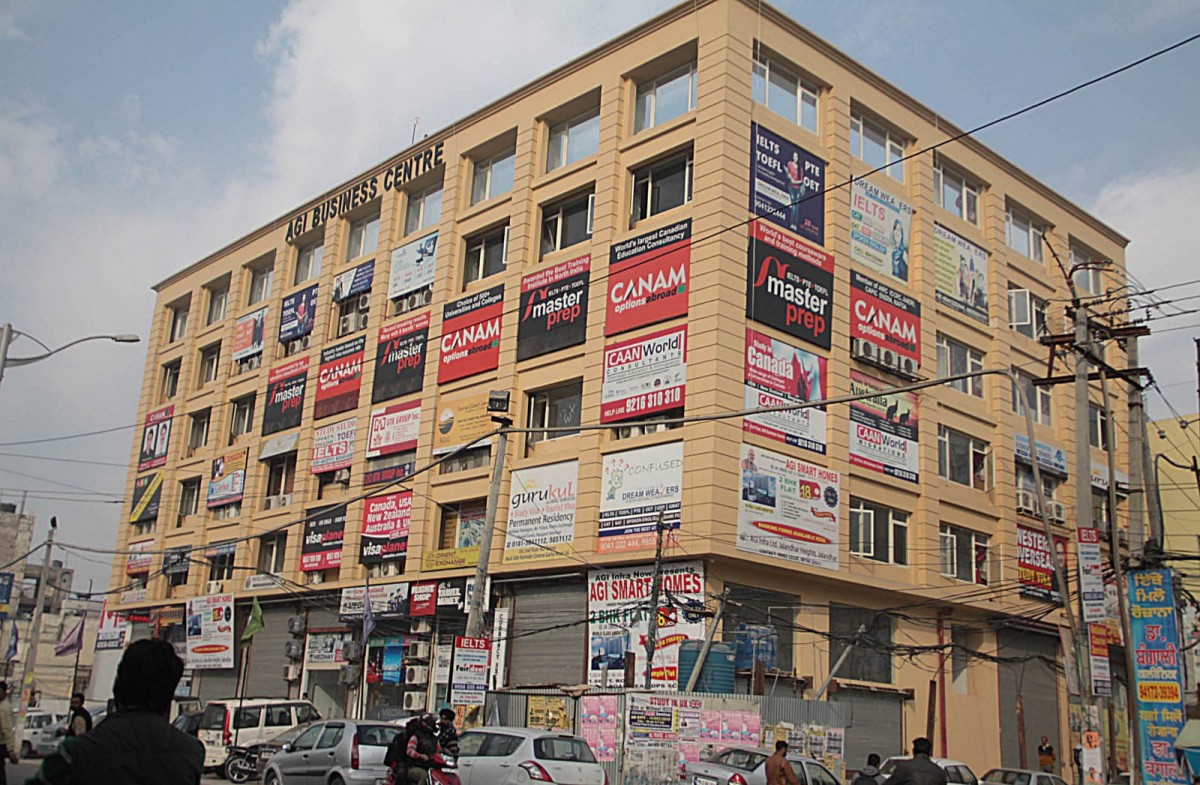 A view of a building in Jalandhar with visa offices of all countries, especially Canada. Photo: Kusum Arora

Varinder Pal, a young graduate, is back home in Adampur from Abu Dhabi in the UAE. SAD-BSP and the Congress are locked in a close fight here. He said, “I have been working in Abu Dhabi for the last four years. I have come home to appear for the IELTS exam and move to Canada and finally the US.”

On elections, he said, “Politicians are promising moon these days but none of them have come up with any agenda to address unemployment and drugs. People in our village are talking about chief minister Charanjit Singh Channi’s welfare measures and SAD-BSP candidate Pawan Kumar Tinu. We will decide between the two.”

At Dalit Dera Sachkhand Ballan, The Wire met three friends – Harpal, Jaspal and Vijay Kumar from Alawalpur and Ballan village of Jalandhar – who said Channi’s performance and the SAD-BSP was a topic of discussion in the villages. “Yes, AAP is in the popular discourse but Dalits have not forgotten how our Guru Ravidass temple was demolished in Delhi. Arvind Kejriwal didn’t do anything to stop it. Recently, a Sikh girl was raped and humiliated publicly, even then Kejriwal’s response was too late and not promising enough. These might sound like non-poll issues but Dalits feel left out when such incidents take place.”

“Channi has improved the lives of not just Dalits but all communities. His decision to reduce the power tariff and petrol-diesel prices, waiving off pending water supply bills, providing jobs and supporting farmers is likely to go in his favour. Also, he stayed overnight at Dera Ballan whereas other politicians just come for photo-ops and spend hardly an hour or two,” they said.

Voters also spoke about how drugs were a major problem in villages. In Chunaini Kalan village of Nawanshahr district, Chaman Lal and his friends Ram Shah and Shekhar said, “Whether it was SAD-BJP or the Congress, drugs continue to ruin lives, houses and marriages. ‘Chitta’ is available across villages but sadly for politicians it is simply a way to seek votes by claiming that they will end it. This is why people are talking about AAP and want to give them a chance. Jhaadu will have an impact.”

For three days, The Wire tracked voters’ moods in the Doaba and Majha region of Punjab. While Doaba has 23 seats, Majha has 25. Doaba accounts for over 32% Dalit votes, which is the highest in the country and a key factor in deciding the fortunes of all political parties.

On the other hand, Punjab’s Majha belt on the Indo-Pak border is home to early Sikhism and also famous as the ‘sword arm of the country’, for sending the maximum number of young people to the armed forces.

On the Jalandhar-Amritsar highway, The Wire met Harnek Singh from Kapurthala’s Jati Ke village and Jagtar Singh from Pandori Golan village of Tarn Taran district, who run a kinnow juice stall. When asked about election issues, both said, “Nasha (drugs). Come to our village and see how youth are neck deep into drugs. This is why they are going abroad. Inflation has also made life difficult. Edible oil prices are at Rs 200 per litre while pulses are above Rs 100 per kg. We are not able to save anything and governments hardly bother.”

At Baba Bakala assembly (reserved) seat of Amritsar, Charanjit Lal, a shopkeeper at Pheruman Chowk, Rayya said, “Congress infighting in our constituency in the past few days has dented its poll prospects. Khadoor Sahib MP Jasbir Singh Dimpa’s brother joined SAD a few days ago, leading to confusion among voters too. Though Congress is in the fight because of CM Channi’s work, AAP has an edge now. While people’s lives have been affected because of drugs, it is nobody’s concern. People want stability and jobs.”

Echoing similar sentiments, a helper at a fruit cart in the same market, Paramjit Singh, said, “I have made up my mind to vote for AAP. What have Congress, SAD-BSP and BJP given us other than compounding our problems? BJP ruined us with demonetisation while Congress failed to provide anything worthwhile during Amarinder Singh’s tenure. Congress brought Channi eyeing assembly polls only. But people will not be fooled this time.”

A few kilometres ahead, at the Jandiala Guru (reserve) assembly seat, an elderly Bhupinder Singh mentioned how both his daughters-in-law, despite having good qualifications, were sitting idle at home. “Then people talk about why the youth are moving abroad. There is hardly any youth left here. Everybody is rushing abroad for employment. Another big reason behind this trend is the communal divide in the country. There is a sense of insecurity among people, particularly youth. Look at this hijab issue in Karnataka. People want jobs, a good life, not Hindu-Muslim divide. We are followers of Guru Nanak Dev and it hurts to see how the country’s harmony was being disturbed,” he said. 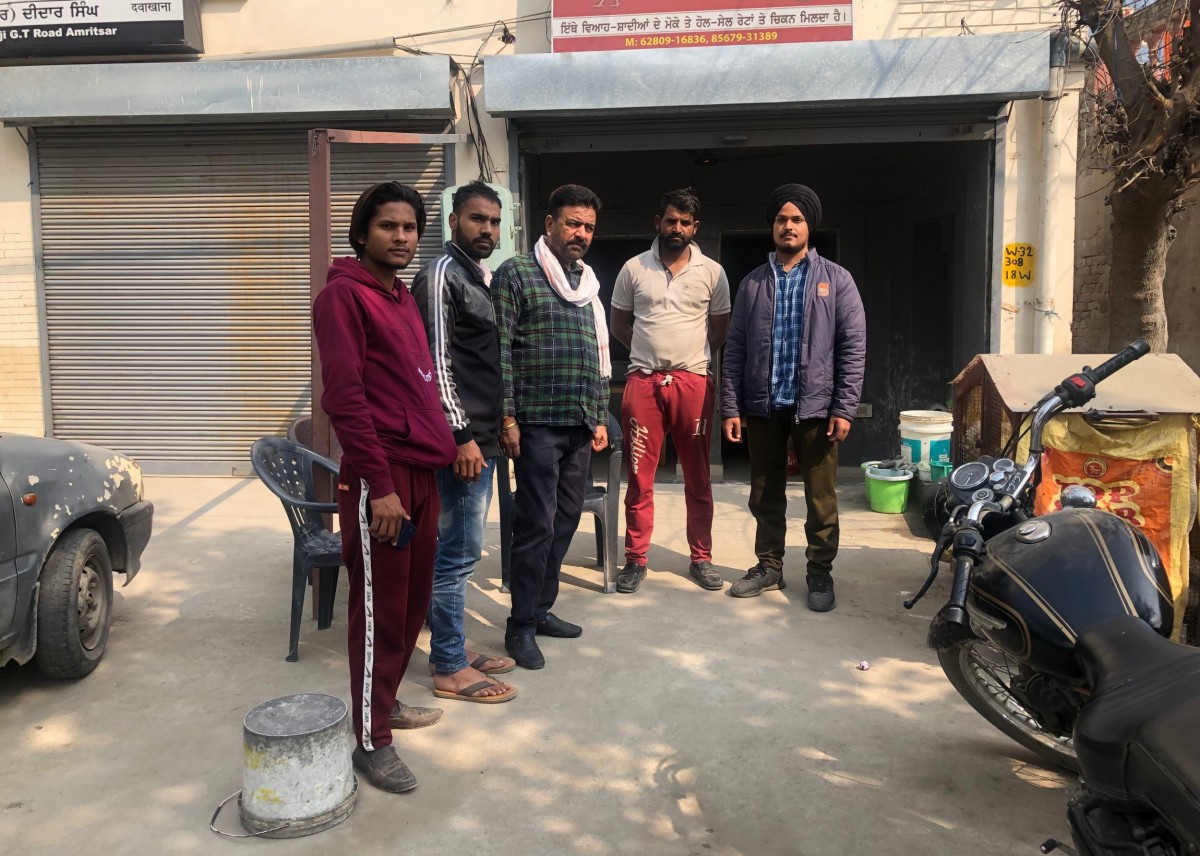 Voters talking to The Wire at Daburji in Amritsar East seat where Navjot Sidhu and Bikram Majitha are locked in a close contest. Photo: Kusum Arora

When asked about election issues, the shopkeeper said, “CM Channi has been claiming that sand prices have been reduced to Rs 5.50 per cubic feet and that a truck of sand would cost Rs 1,600. I have to construct my house. When I checked the sand prices, it is still available at the old rate of Rs 2,500. Basically, Akaliya ne jo beej boye si, Congress ne ohna nu pani dita (Whatever seeds SAD had sown during their tenure, Congress watered it). People feel cheated.”

The Wire also visited the Amritsar East constituency, which has become a hot seat after Punjab Congress chief Navjot Singh Sidhu challenged SAD’s firebrand leader Bikram Singh Majithia to contest against him. A mere visit to this constituency gave a sense of the fight between the two leaders, as every single house, shop, wall, road, highway, lane and even trees were choked with Congress and SAD flags, buntings, stickers and loudspeakers.

Dr Avneet Singh, who owned a clinic at Daburji in Amritsar East, said, “It is an interesting and tough fight. You can see how much money has been spent on the campaign. This time voters will vote for a candidate and not the party. The good one among the two will win.”

Another voter, Lakha Singh, a truck driver, also joined the conversation and shared how Sidhu helped his daughter-in-law get a job. “When I went to meet Sidhu along with my daughter-in-law, he told me that your work is done. She is my daughter, don’t worry. Within a week’s time, my daughter-in-law got the job. Sidhu’s accessibility and service have always remained his strong points,” he said.

A few yards away, Rupinder Kaur came out of her house for some work. The boundary walls of Rupinder’s house were flooded with party flags, hoardings and stickers. When asked about her preference, she said, “It is confusing for voters too. Bikram Majithia’s campaign is strong but we are yet to decide whom to vote for.”

On Amritsar’s Ghee Road, Jasbir Singh, an elderly man running a tea stall, said, “I am concerned about my day’s earnings. Unless a government announces a major economic boost for the welfare of people, common man’s issues will always remain the same. Congress, AAP and SAD are talking big but it is difficult to say who will form the government. 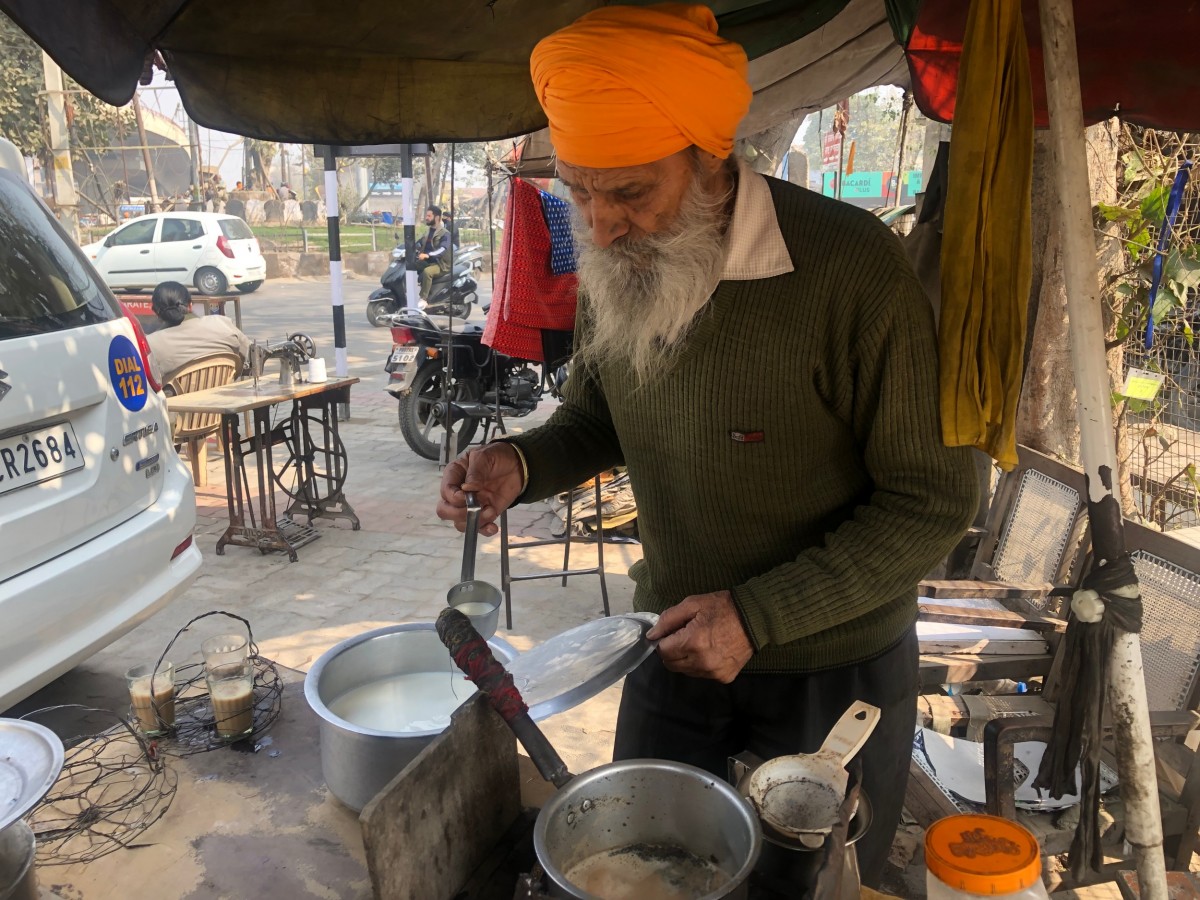 The Wire also met some voters from Batala on the Amritsar-Batala highway, who shared how the once flourishing industrial town is on the decline and nearly forgotten. Ramesh Kumar, a shopkeeper, said, “Batala used to be the hub of iron, casting and agricultural inputs industry. Over the years, it has seen a total fall. People need jobs and the governments are not even interested in saving the existing industry.”

Another local resident said, “Despite Amritsar being the nearest airport, no politician was doing anything. Over the years, cross-border trade has also come to a naught, which has affected industry prospects. Congress, SAD, AAP and BJP have been talking big but they have not announced anything concrete about how to boost industry. We need a solution for this.”

On the way back from Amritsar, Sukhbir Singh Badal was addressing a rally on Batala road announcing the party’s policies amidst chants of ‘Jo Bole so Nihal, Sat Sri Akal’. Earlier, at Gurdaspur’s Naushera Pattan village, when this correspondent spoke to two young men at a restaurant about elections, they said, “We have come on vacation from Toronto, Canada. Both of us are Permanent Residents of Canada now.”

When asked what was good about moving to Canada, the UK, the US and New Zealand, one said, “I am just 26 years old. I have a good job, own a car and I am planning to get married. Had I been here in India, I would have been jobless or working somewhere in the private sector at a meagre salary.”

The young men said that moving abroad was the best decision they could ever take. “No doubt as a student, life was difficult, but we are settled now. What else does one needs in life? But we are enjoying the poll season.”