While Channi claims to be a 'gareeb ghar ka beta', AAP candidate Labh Singh, who owns a mobile phone repair shop, tells the voters in his constituency of his real-life background when his only possession was a 2014 Hero Honda motorcycle. 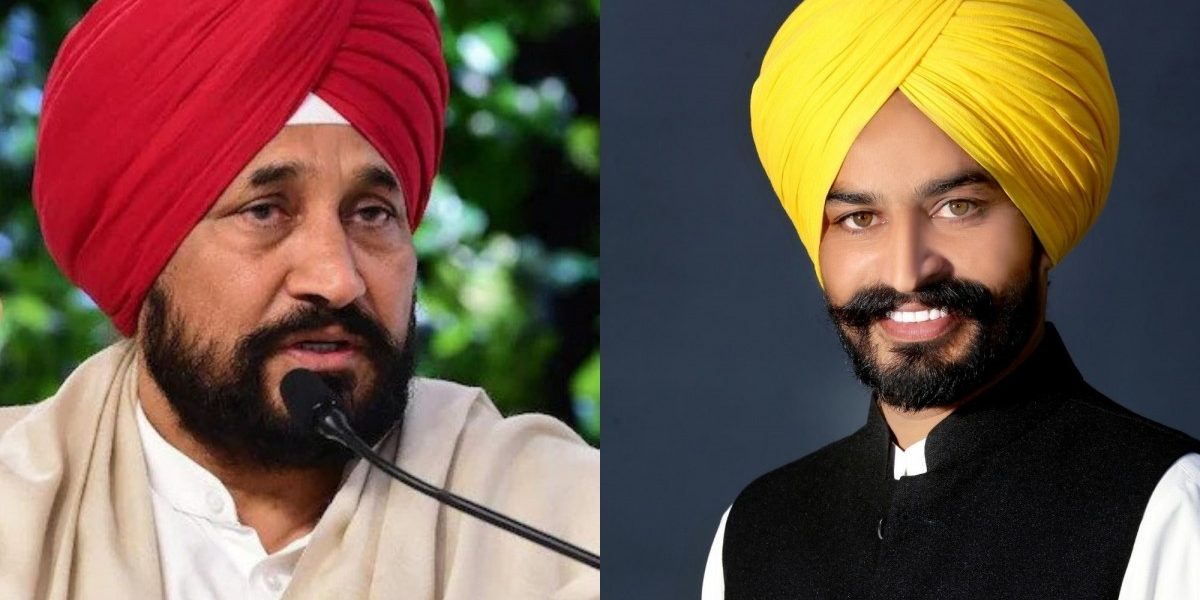 Jalandhar: If there is one assembly constituency in Punjab that has suddenly caught everybody’s attention, it is the Bhadaur seat in the Barnala district of the state’s Malwa region – the seat from which chief minister Charanjit Singh Channi has been fielded by the Congress against the Aam Aadmi Party’s (AAP) Labh Singh.

While the nation is focusing on the seat because of the key contest between the two candidates, in Bhadaur, the focus is on historical and political sentiments, rooted in the first assembly elections of the erstwhile Patiala and East Punjab States Union (PEPSU), held in 1952.

“During the 1952 polls, the Bhadaur seat witnessed a contest between King Nirpal Singh and marginal farmer Arjun Singh from Communist Party of India (CPI). Nirpal Singh, being a king, owned palaces, cars and huge amounts of money. His campaign was lavish. On the other hand, Arjun Singh, who led PEPSU’s Muzara (literally, landless farmer) movement in 1952, came from a humble family and campaigned on bullock carts. Despite a massive show of strength, Nirpal Singh lost the elections and comrade Arjun Singh won with a thumping majority,” Labh Singh told The Wire.

When The Wire spoke to the AAP candidate during his visit to Jalandhar, he said that ever since the Congress announced that Channi would be contesting from Bhadaur, the voters in the constituency were determined to repeat the history of the 1952 PEPSU assembly election by defeating him. While Channi (58) claims to be a “gareeb ghar ka beta (the son of a poor home)”, Labh Singh (35), who owns a mobile phone repair shop in Bhadaur’s Ugoke village, tells the voters of his humble background, when a 2014 Hero Honda motorcycle was his only asset; a fact that he mentioned on his election affidavit too.

Labh Singh pointed out that Nirpal Singh had spent Rs 1 lakh on his election campaign – a huge amount at that time – while Arjun Singh could only arrange Rs 1,000, but the latter still managed to win. “I am going to repeat this history in these elections. In fact, the voters have coined a slogan in Punjabi: ‘Dhuri to CM jitauna, Bhadaur to CM harana (Ensure victory for the CM from Dhuri and defeat for the CM from Bhadaur)’,” he said.

The slogan is a reference to Bhagwant Mann, AAP’s CM face who is contesting the assembly polls from the Dhuri constituency.

Also read: With Channi as Punjab CM Face, Will Congress Consolidate the Votes it Is Hoping For?

Labh Singh’s background is perhaps why voters in his constituency are not surprised when they meet him at a bus stand or see him boarding a bus to campaign for the upcoming elections, as opposed to Channi’s cavalcade of cars and security staff whenever he reaches Bhadaur.

“On an average, there are 50 passengers in the bus and this gives me a chance to interact with them personally. They, in turn, spread the word in different villages,” Labh Singh explained.

On a lighter note, he also said that he was thankful that the Election Commission of India banned campaign rallies in light of a spike in COVID-19 cases. “It has reduced my expenses. As I don’t have any bank balance, I am focussing on door-to-door campaigns,” Labh Singh said with a smile.

“People of Bhadaur have always stood against the feudal lords and these elections will be no different,” he said, taking a dig at the chief minister by calling him a “crorepati politician” as opposed to a “common man” like himself. Labh Singh, however, made no explicit reference to the recent Enforcement Directorate (ED) raids on Channi’s nephew in relation to his alleged involvement in illegal sand mining in the state.

Labh Singh told The Wire that he joined AAP in 2013 after the Anna Hazare-led ‘India Against Corruption’ movement. His father is a driver while his mother works as a sweeper in the government school in the village.

After passing Class 12, Labh Singh took up a diploma course in mobile phone repair and opened a shop in his village. However, his shop has been closed for the last three years now

Also read: From ‘Only Sikh Can Be CM’ to ‘Why Not a Hindu’: Is AAP Trying to Polarise Punjab Polls? 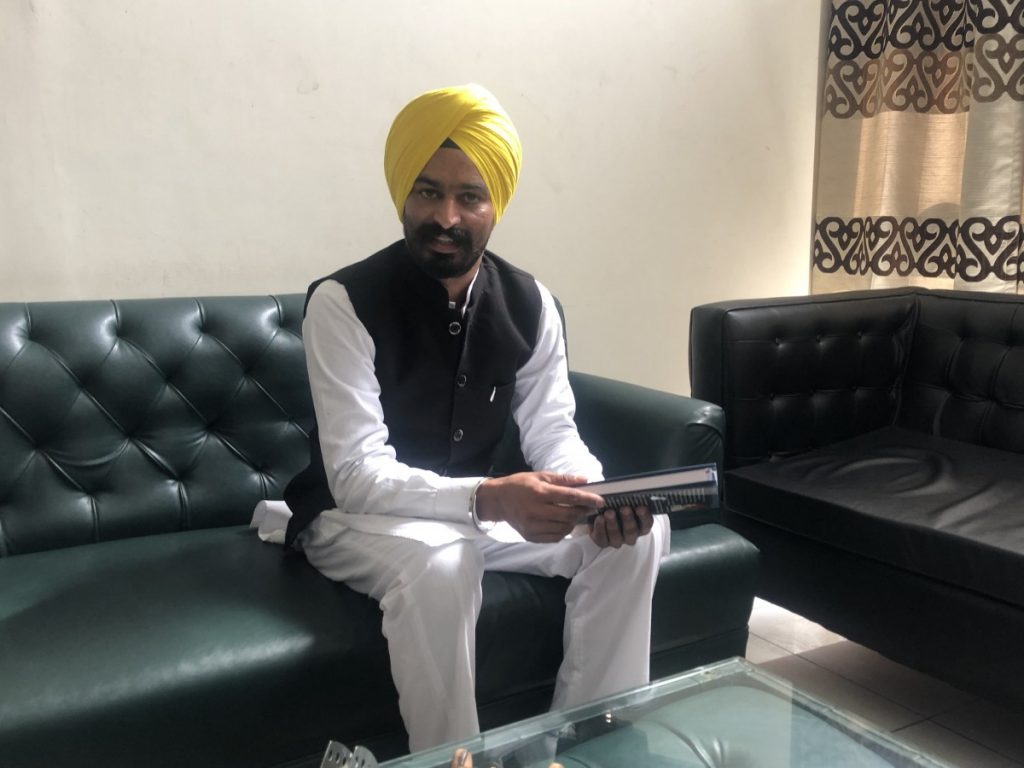 Labh Singh, speaking to The Wire while on a personal visit to Jalandhar. Photo: Kusum Arora/ The Wire.

Labh Singh’s elder brother, a retired soldier in the Indian Army, has also been campaigning for him. “Even I wanted to join the Indian Army but I was not selected. My elder brother served in the Army for 17 years and retired from the rank of Sepoy recently,” Labh Singh said, adding that, given his family’s financial status, he could not think of higher education and rather, decided to become an earning hand for the family.

When asked if the defection of sitting Bhadaur MLA Pirmal Singh Dhaula from AAP to the Congress was a setback for his party, Labh Singh responded by saying that the decision cost Dhaula dearly. “Pirmal left his home (AAP) and people were very angry with him. He was not even considered for a ticket by the Congress,” he said.

Bhadaur has 74 villages including two towns and was traditionally a Shiromani Akali Dal (SAD) stronghold until AAP emerged on the political scene in 2017 and Dhaula won the seat. The Congress, on the other hand, has won the seat just twice; once in 1969 and again in 2012.

Bhadaur falls under the Sangrur Lok Sabha seat, an AAP stronghold from where Mann won consecutive Lok Sabha polls in 2014 and 2019. In the 2017 assembly polls, AAP won a total 20 seats out of which 18 were from the Malwa belt alone while the other two seats were from the Doaba region.

A group of supporters who accompanied Labh Singh to Jalandhar told The Wire that AAP’s announcement of Mann as the CM face has lifted the party’s graph.

Harpreet Singh Brar from the Balloke village in Bhadaur said that many SAD and Congress workers have joined AAP in the past few days. “Labh Singh and his father remained at forefront in the farmers’ protest too. Our entire village, rather, the entire Malwa region, was at the Tikri border supporting farmers,” he said.

Another one of Labh Singh’s supporters, Gurpreet Singh Dhillon from Dhilwan village said that in the coming days, Mann as well as AAP supremo Arvind Kejriwal will be coming to Bhadaur. “That would give further fillip to Labh Singh’s campaign,” he said.