In Punjab, AAP Asks People for a Chief Minister, But Will That Be Enough to Win?

The small party’s experiment in direct democracy is one that holds out much promise. 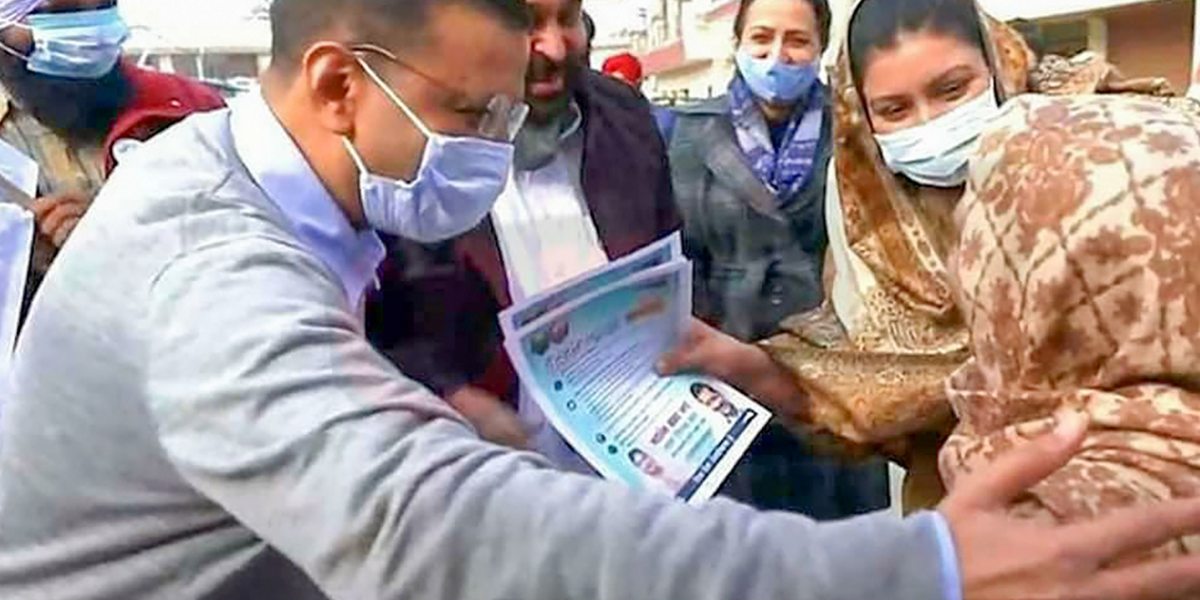 As the poll bugle for the five states heading for election next month was sounded earlier this week, the array of opinion polls released since put Aam Aadmi Party as the party in the lead in Punjab elections on account of intense infighting within Congress (especially between Navjot Singh Sidhu and chief minister Charanjit Singh Channi) and anti-incumbency against the Congress, the Aam Aadmi Party, with the appeal of its Delhi model of governance (cheap and reliable electricity and water and quality public healthcare and education) may bring over many voters to its side.

However, the road to power for AAP is full of formidable challenges: the popularity of Channi, a Dalit, has made AAP’s reach to Dalits more difficult and raises the stake. AAP is also handicapped with the absence of leaders other than Bhagwant Mann with statewide appeal and its organisation is weak. There are hardly any formidable local candidates. But what imperilled AAP’s chances most in a replay of 2017 elections (where against expectations of AAP sweep, it was the Congress that swept the polls) was its inability to project a chief ministerial face, spurring allegations of outside control and lack of local leadership.

But January 13, Thursday’s announcement by AAP of a public poll for choosing it’s chief ministerial candidate therefore could be a masterstroke that has the potential of converting a supposed weakness into a strength because of the following factors:

Will boost acceptability, legitimacy and popularity of the final CM candidate

A leader selected based on public polling will have the stamp of public approval. It will help him/her to get the party together behind him/her as a public polling is the fairest means a candidate in a democratic polity has. It levels the playing field in so far as anyone is free to mobilise the public opinion behind them and prove their worth in front of the ultimate gods in a democracy – the “Demos”, or the all-powerful people. The presence of such a fair process ensures that the contenders who lose out are more likely to get along with the party as the chief ministerial candidate will have the greatest legitimacy democracy affords anyone – of being the people’s choice. Thus with the decision AAP stands better chances of presenting a united front to the voters of Punjab.

Further, the leader who will get selected through the public polling becomes more popular amongst the general voters too as they perceive him/her to be a more legitimate option. Thus, AAP’s choice may be more popular because of being selected by the public rather than being perceived as being appointed by party leaders.

Will discredit and weaken allegations of outside control

For a long time, it has been speculated by AAP’s rival that the party was unwilling to name a chief ministerial candidate as Arvind Kejriwal was eyeing the job for himself as he wanted to keep the control of the Punjab government if it wins. This suspicion has aroused opposition from a significant section of Punjab voters who are particular about their Punjabi identity and wanted, not without merit, a Punjabi to lead Punjab.

But the decision to announce the chief ministerial candidate on January 17 and that too through a process of public polling will considerably weaken the allegation of outside control. It will help it gain trust and votes of a new section of voters who would have otherwise been sceptical of voting for an outsider lead party. But the absence of other formidable local leaders will perhaps limit AAP’s gain on this front.

The process of public polling will help mobilise its supporters as they will feel empowered in having their voice heard and valued. It will also bring in new voters who will be drawn by the novelty of having a say in deciding who will lead a party. They will also feel ownership of the decision.

On a tangible front, the party choice of voting through phone call, WhatsApp and message will ensure the party will gain valuable data regarding its potential voters and create a database of these voters numbers for further messaging and digital campaign. This will help it to adopt better to the EC’s mandate for virtual campaign than its rival.

The novelty of the decision will help it continue to set the narrative and dominate the public discourse. By stretching the voting out over the next four days, AAP has ensured that it can drive significantly the poll agenda for a crucial period of the final leg before elections.

Though like all masterstrokes it has its risks too, like a dark horse arising who can upset the AAP’s apple cart. But it can be still more transformative for our democracy if it can show the way for more internal democracy through a system of primaries for selecting leaders. The absence of this has prevented rise of new leaders to occupy the vacuum in the opposition space unlike many other western democracies where primaries ensure leaders who don’t perform are rooted out and fresh talent identified through an established leader selection process. The traditional process where the High Command choses a chief minister after victory results in an extremely high entry barrier for common citizens, thus reducing the influx of talent in politics and creating public disinterest in politics.

Watch | Exclusive: ‘Rumours of a Rift Between Channi and Me Being Used to Fool Voters’, Says Sidhu

However, the political astuteness aside the move’s transformative potential is limited by multiple issues plaguing AAP’s move:

For any such polling to truly reflect will of the people, it is necessary that the voters have real choices to choose from. But with no other AAP leader with an active Pan-Punjab base in the fray, the result will only incompletely reflect people’s choice.

No mechanism for limiting such voting to Punjab voters

The polling has not provided any mechanism for limiting the voting to Punjab voters, so it is in that sense limited in its utility in reflecting voter choice of Punjab.  This can be addressed by having mechanism to weeding out any non Punjab voters.

Absence of formal processes that can ensure informed choice

Unlike the western primaries, this polling is not accompanied by attendant processes like debates stretched out over weeks to enable candidates to be better examined by their party voters. Such processes also ensure that authentic, and often surprising leaders, emerge from the contestations based on informed choice. However, as AAP has only provided four days for polling the possibility of emergence of a fresh authentic leader based on debates and active campaigning is limited.

Absence of transparency regarding polling sample and results

The transformative impact of the move is also limited by the absence of transparency regarding polling sample and results. Thus, doubts regarding possibility of manipulation are hard to rule out. This issue can, again, be addressed easily by having transparent results open to verification.

Thus, the move has many practical limitations. Even so the move is a welcome experiment towards a more democratic party politics in India, which may become a foundation for more such experiments across political lines if it succeeds.