In Photos: The Story of Assam's 2021 Assembly Election

For the first phase, which will vote on March 27, electioneering appears to be low-key – in stark contrast to 2016. But the posters put up by various parties do capture the essence of their campaign.

Posters and billboards seen in constituencies of Upper Assam, which will vote on March 27, 2021. Photo: Sangeeta Barooah Pisharoty

Dibrugarh: When crisscrossing through the constituencies in upper Assam which are going to vote on March 27, what stands out is the low-key electioneering – a stark contrast to what was noted in 2016.

In the last assembly polls, the Bharatiya Janata Party (BJP) was challenging the three-term-old Tarun Gogoi government. Its campaign was backed by the popular jati, mati, bheti slogan to protect the land and identity of the majority Assamese community. It was also strengthened after Sarbananda Sonowal was projected as the chief ministerial candidate of a three-party alliance with regional parties. With Prime Minister Narendra Modi promising that the Centre would help his party’s government in the state find a ‘permanent solution’ to the ‘illegal immigrant’ issue, the air was thick with anticipation across upper Assam for poriborton (change) for the better.

Five years hence, there has been a constant flow of the usual star campaigners from the two major contenders for power – the BJP and the Congress – arriving from Delhi in chartered flights to join state-level leaders and their respective party candidates’ campaign. These include Modi, the Gandhi siblings and a litany of current and former Central ministers.

And yet, electioneering is much more subdued than before. Common modes of campaigning – posters of candidates and parties, flags, sloganeering by supporters, poll songs blaring from loudspeakers – are not as vibrant throughout the constituencies as what was observed in the last assembly polls. Booths set up by the parties across the constituencies are usually empty throughout the day, with small crowds spotted only during the early evenings – perhaps an expected consequence of the COVID-19 pandemic.

People on the street and leaders of parties are equally unsure of who will emerge on top on May 2, when results will be announced.

Traversing through the huge expanse of the state from Guwahati to the largest township in upper Assam, Dibrugarh, there may not be as many posters and billboards of various parties and their candidates as they were in 2016 – particularly of the BJP, but they do sum up the story of the 2021 Assam assembly elections. 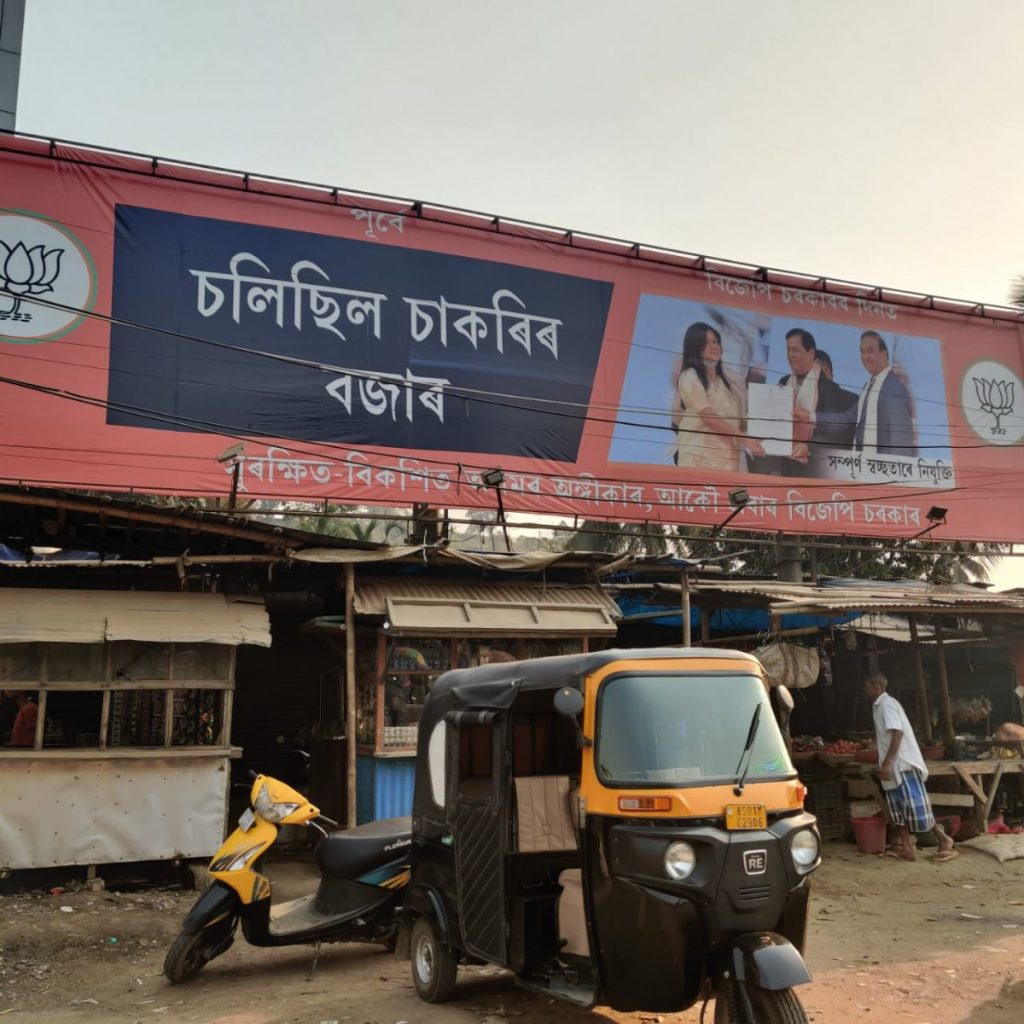 The ruling BJP is banking heavily on its direct cash transfer scheme and other welfare schemes offered to sections of people for votes during this election. It is also claiming to have granted jobs without monetary inducements. One such billboard, spotted on the National Highway 37 that links Guwahati to upper Assam, highlights the party’s poll strategy to return to power. 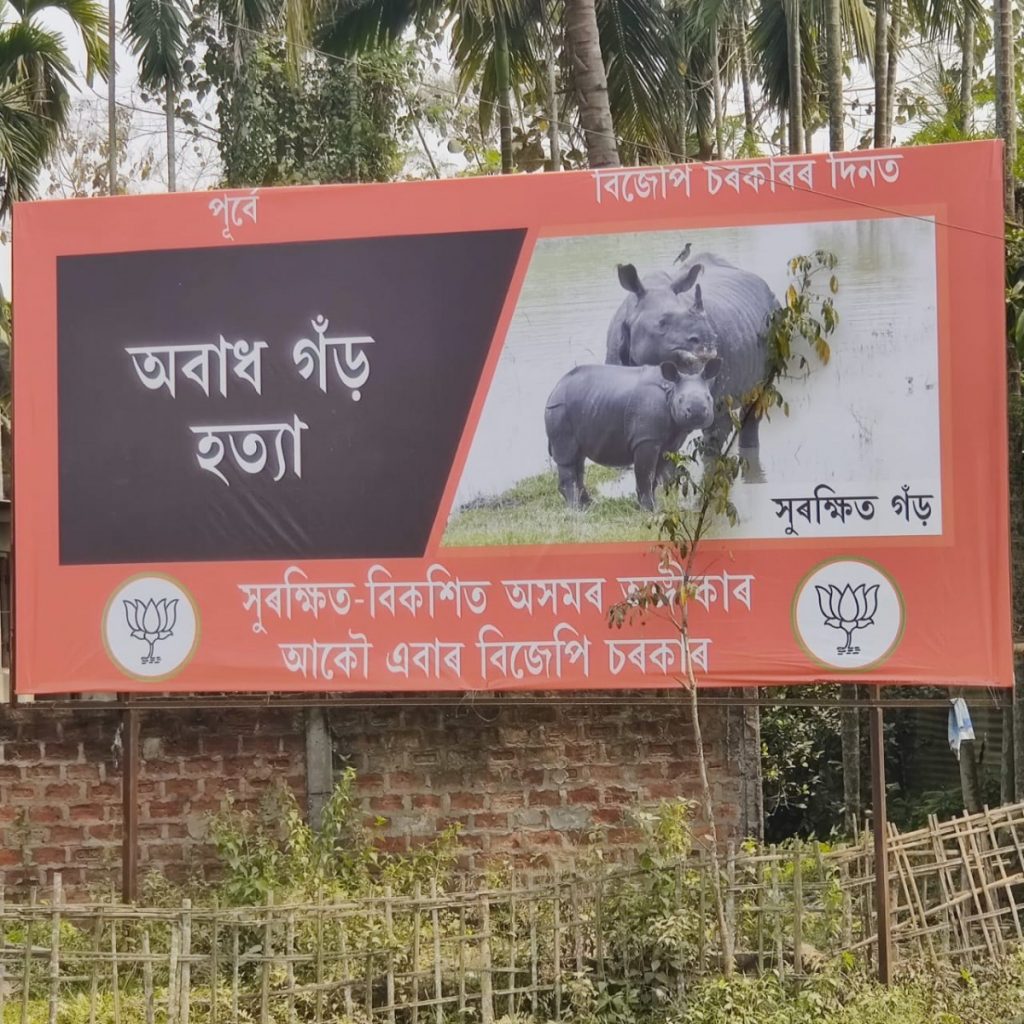 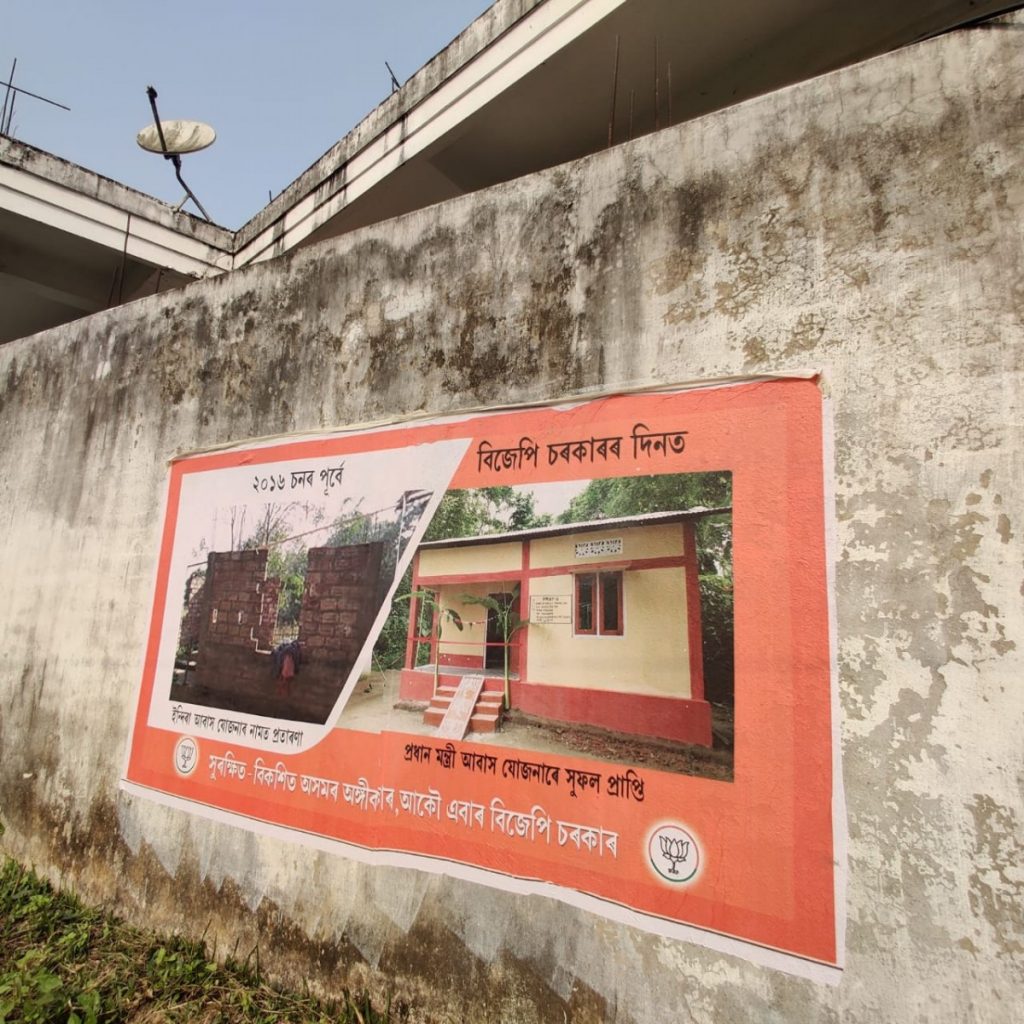 The Sarbananda Sonowal government is advertising itself as a vehicle of good governance. Throughout the Brahmaputra valley, the BJP’s posters on public walls and billboards particularly highlight three claims: protection of the state’s symbol, the one-horned rhino, from poaching; better delivery of houses in the state through the Pradhan Mantri Awas Yojana than that of the Indira Awas Yojana; and improving the condition of certain roads. These posters were spotted in the Samaguri constituency of Jorhat, one of the 47 assembly segment to go to the polls on March 27. 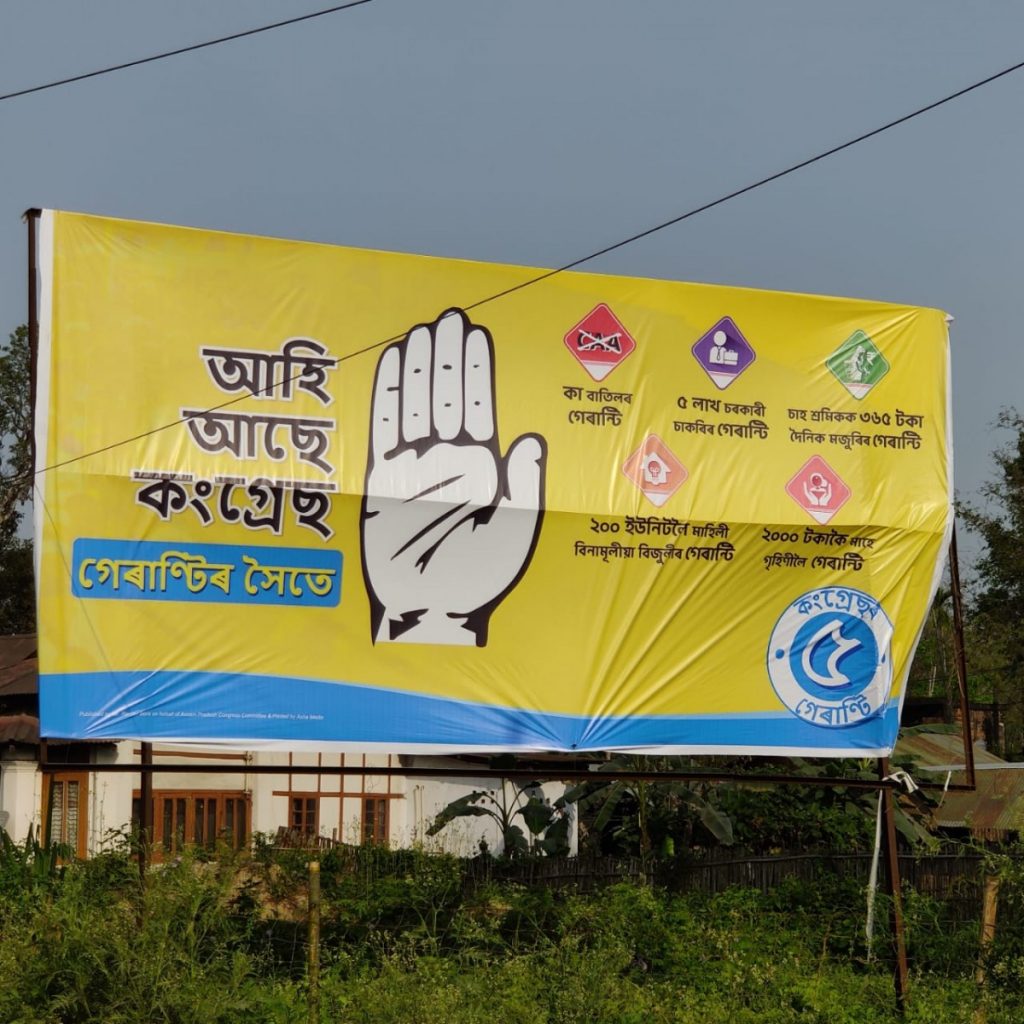 In contrast, the opposition Congress has promised people five deliverables if it comes to power. It promises to abolish the Citizenship Amendment Act, grant jobs to five lakh youth, give 200 units of free electricity, raise the daily wage of tea garden workers to Rs 365 and give Rs 2,000 to married women per month (as against the Rs 830 given by the Sonowal government). This billboard sighted in the Moran constituency, going to polls in the first of the three-phase elections in the state, highlights these promises. 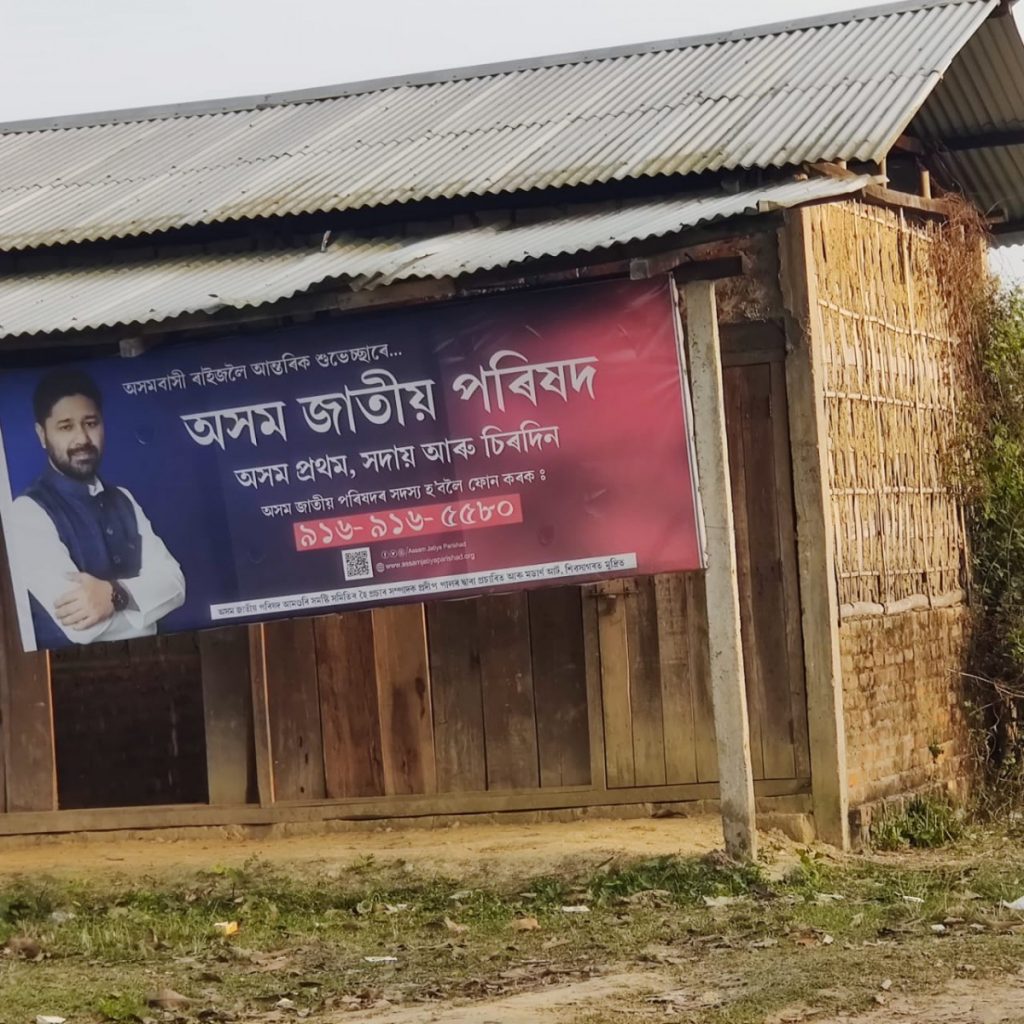 Apart from the BJP, its ally the Asom Gana Parishad, and the Congress, posters and signboard featuring Lurinjyoti Gogoi of the newly formed regional party Assam Jatiya Parishad and the incarcerated Akhil Gogoi, the face of its ally Raijor Dal, are also visible. This poster of the Assam Jatiya Parishad leader is from the Amguri constituency. 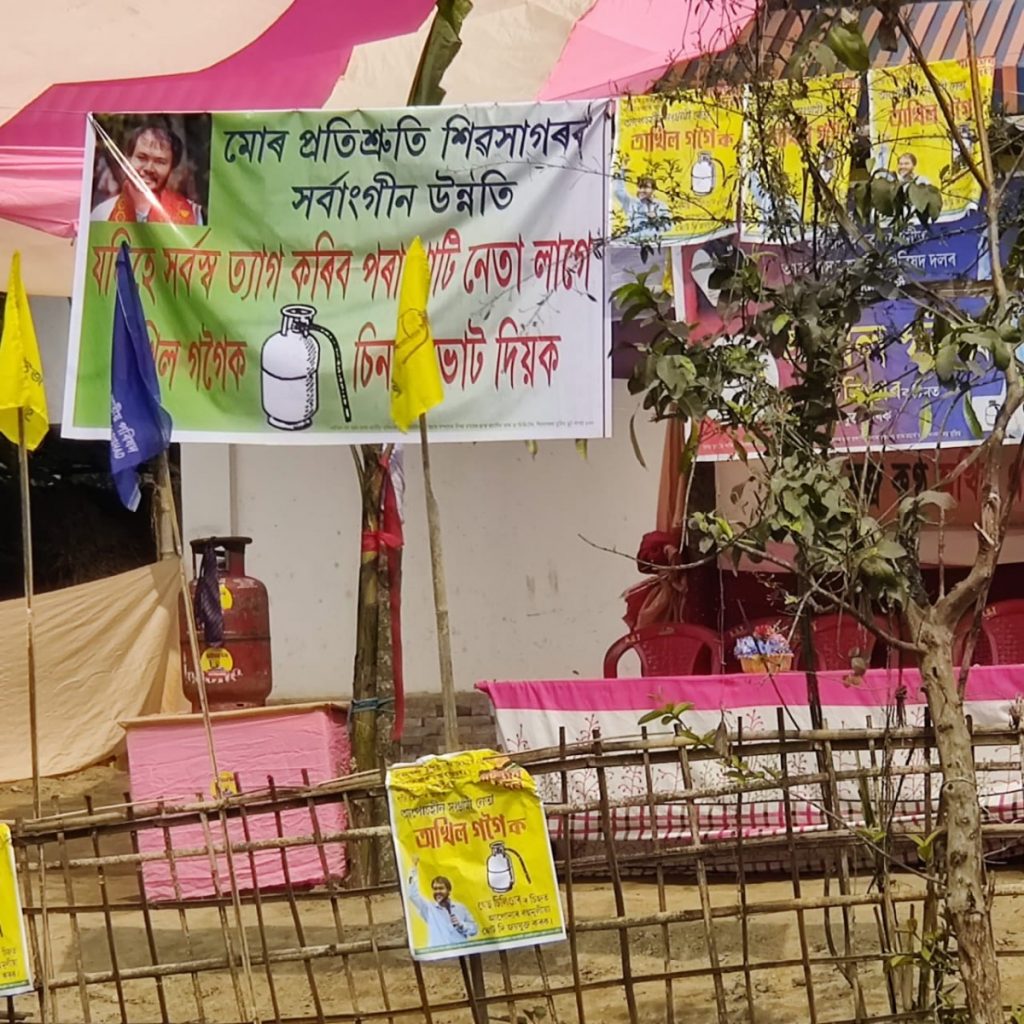 A poll booth of Raijor Dal candidate Akhil Gogoi in the Sivasagar constituency has an empty LPG cylinder, the party’s poll symbol. 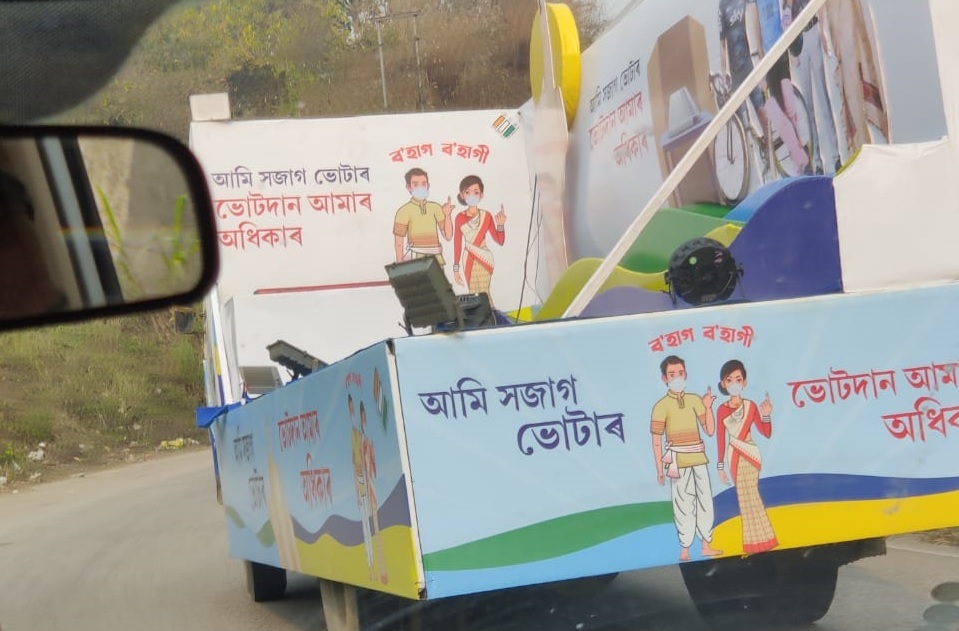 Meanwhile, the Election Commission of India has put up a number of posters and billboards across the state, prodding people to exercise their right to vote on March 27, April 1 and April 6. This shot is of a mobile promotional van of the ECI wheeling through the Koliabor constituency.

All photos by Sangeeta Barooah Pisharoty.